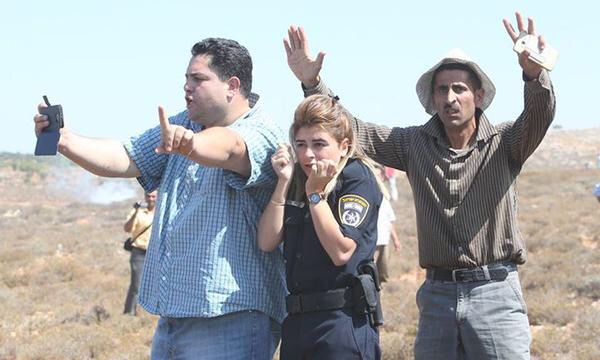 The image surfaced online amidst increasing tensions between Israelis and Palestinians, following the burning to death of a 14 month-old baby in an attack by extremist Jewish settlers.

Look at that, Palestians protecting a Israeli policewoman from rock throwing Israeli extremists.

posted on Aug, 3 2015 @ 06:25 PM
link
Empathy and compassion extend beyond arbitrary borders and religions. It's a shame that this is considered newsworthy. Not downplaying what happened here, it's an awesome gesture, but I think that this going viral is evidence of the sickness of the world we live in. Are we so far gone that something as simple as two guys protecting a woman from abuse is worthy of going viral? This should be the norm not the exception.

S&F though, it's awesome to see stuff like this anyways.

Well, I wouldn't say its newsworthy considering no western MSN are, or will be, covering this. As far as it going viral, lots of things go viral, some good, some bad, most hilarious. But this is important because of the current political tensions in that region. The Palestinians are painted as terrorists who want nothing more then to kill the Jews living next door to them but in this scene it's Jewish extremist who are attacking a fellow Jew and Palestinians protecting the lone Jew being attack.

It's a powerful image for the current state of affairs between Israel and Palestine.


Look at that, Palestians protecting a Israeli policewoman from rock throwing Israeli extremists.


RHR has stated that the photograph was taken after a settler, attempting to prevent Palestinians of the village Kusra from working their land, accused a Palestinian of throwing stones. In response to the accusation, the police attempted to arrest the Palestinians at the scene, who then began to throw stones.

Sooo I guess you favor the RT article's account then?

posted on Aug, 4 2015 @ 01:34 AM
link
Israel ruled out that stone-throwing will get you 10 years in jail thanks to an accelerated procedure. I wonder if this will be applicable given that settlers were stone-throwers in this case.

Here is a business-as-usual settler threatening activists on 26th July at demonstration in Hebron :

This Israeli policewoman means them the same as Netanyahu

They are protecting a witch

The story behind the photo

Both sides are throwing stones now ... Just another proof that there will never be peace in the ME until the occupation stops.

No way to defeat Jewish terrorism without ending the occupation

edit on 4-8-2015 by theultimatebelgianjoke because: Added link

This is precisely what is so tragic in Israel because there are very decent people on both sides there and they get very little publicity. The woman looks like a kid and must have been terrified.

So tell me, are you saying that no stones were thrown at the Israeli policewoman by Israeli extremists and the only rocks thrown were by Palestians?
edit on 4-8-2015 by Swills because: (no reason given)