posted on Aug, 3 2015 @ 05:47 PM
link
Came across this during my break at work today and the lengthy article presented some new insights about the prospect of a "simulated reality" theory that I hadn't heard before.. From an article from Space.com that came out 3 days ago;

Most of it is philosophical in nature, but really made me think about this theory in a way I hadn't ever before:


(David Brin - "space" scientist and sci-fi writer) relates the Chinese parable of an emperor dreaming that he was a butterfly dreaming that he was an emperor. In contemporary versions, Brin said, it may be the year 2050 and people are living in a computer simulation of what life was like in the early 21st century — or it may be billions of years from now, and people are in a simulation of what primitive planets and people were once like.

a bit of dry humor helping to illustrate this idea -

As technology visionary Ray Kurzweil put it, "maybe our whole universe is a science experiment of some junior high school student in another universe." (Given how things are going, he jokes, she may not get a good grade.)


Kurzweil's worldview is based on the profound implications of what happens over time when computing power grows exponentially. Corroborating the evidence that this universe runs on a computer, he says, is that "physical laws are sets of computational processes" and "information is constantly changing, being manipulated, running on some computational substrate." And that would mean, he concluded, "the

universe is a computer." Kurzweil said he considers himself to be a "pattern of information."


(a "backdoor" sounds like stargates, time travel, and other interesting unexplainable technologies we may have heard about - sorry... got ahead of myself)

The part that resonated with me and why I wanted to make this thread:


"the simulation hypothesis is not an alternative to theism or atheism. It could be a version of either — it's independent of whether God exists." While the simulation argument is "not an attempt to refute theism," he said, it would "imply a weaker form of a creation hypothesis," because the creator-simulators "would have some of the attributes we traditionally associate with God in the sense that they would have created our world."

As a side note: let's try not to let this become a debate between atheists and believers - if someone says something you disagree with just don't attack or try to shut them down. accept their beliefs and let's keep the discussion moving in a positive direction. Thank you ATS
edit on 3-8-2015 by FamCore because: commentary

bananashooter
+1 more
posted on Aug, 3 2015 @ 05:58 PM
link
Pot heads have been sitting around talking about this stuff since before it was even cool.

posted on Aug, 3 2015 @ 06:03 PM
link
Aren't our brains quantum computers? Maybe the computer that this simulation is running on is part of the simulation as well.

posted on Aug, 3 2015 @ 06:06 PM
link
Interesting. Maybe we're all in one single game with 7 billion players, each with their own character. 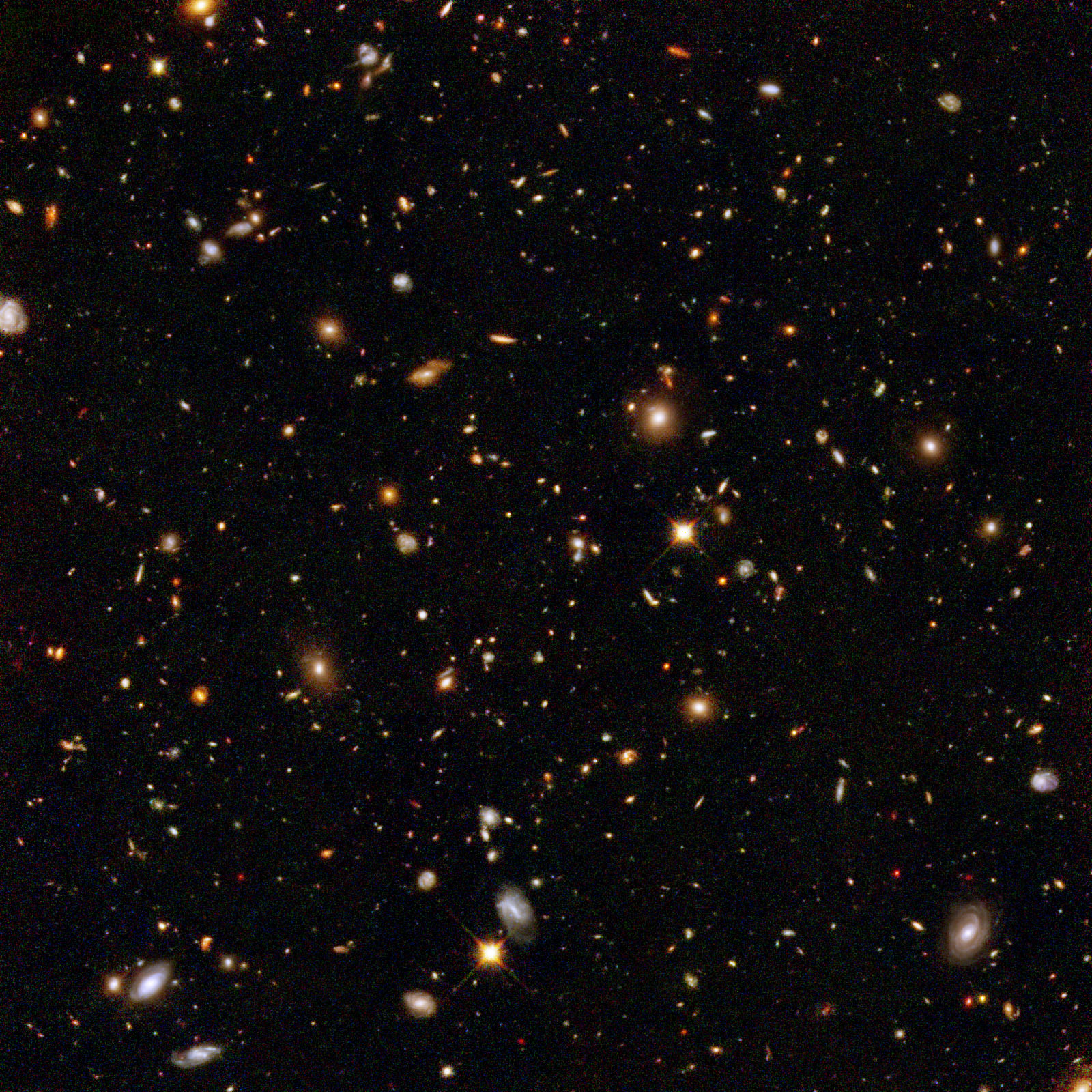 posted on Aug, 3 2015 @ 06:14 PM
link
Does the fake go out towards Pluto? Or what about where Voyager is? I don't know what our universe is, it could be a simulation, a very vast and large one that was NOT created for earth or humans, but that we are an insignificant spot in it.

I have been having random thoughts lately that the universe is powering something else, and we happened to spark life on one of the cogs in the machine. Naturally I think that is unlikely also, but all these thoughts are just that, I give them little credence and leave it to greater minds to ponder

but the stuff they toke on these days is so much stronger - more evidence of a simulated reality and a continual increase in complexity of the system??

originally posted by: zazzafrazz
Does the fake go out towards Pluto?

I think the fakest parts of this "reality" are the shows on Television and people who are so completely consumed and "trained" by the media. These folks are even faker than the simulated reality they are in! lol

I have had this same thought lately. Almost like the universe is like a filter for energy, to smooth and purify it. One thing I do know is that the universe seems to want to make data, lots and lots of data, vast amounts of data.

posted on Aug, 3 2015 @ 06:25 PM
link
Maybe that beings from another universe are trying to build AI on this planet, assuming we are not intelligent species afterall when you look at all the mess we've created here.
Or they're stuck because we're trying to hack into their system with our science and they don't want to let us know what's behind the curtains by making an obstacles on every corner. That's why we are left hanging with more questions than answers.
Damn...
How's the weather today?

originally posted by: RealTruthSeeker
Interesting. Maybe we're all in one single game with 7 billion players, each with their own character.

posted on Aug, 3 2015 @ 06:44 PM
link
Who's to say that the manifestation of reality the way we observe it isn't the only way reality exists?

What were we expecting to see in order to prove it's "not" a simulation?

Perhaps reality exists only because we exist...
edit on 3-8-2015 by coldkidc because: (no reason given)

originally posted by: blacktie
it might be a fake or copy of real one I suppose however seems 'real right now

Oh, I really like the idea of us living in a fake copy of the universe. We are like the Chinese Windows 7 that you can't register.
I suppose that explains why the whole thing is coming down around our ears, climate change, violence, society, just a general degeneration.
We get no frickin upgrades!!!

That a team of researchers are devising a test to see if we really are a simulation by checking to see if the Universe is using bandwidth. No joke, read about it a couple of weeks ago. I'll go look for it


As Hogan explained to Motherboard’s Jason Koebler, if we are indeed living in a hologram, "the basic effect is that reality has a limited amount of information, like a Netflix movie when Comcast is not giving you enough bandwidth. So things are a little blurry and jittery. Nothing ever just stands still, but is always moving a tiny bit."

Reality’s bandwidth fuzz, if you will, is exactly what Hogan’s lab is now trying to measure, using an instrument called the Holometer, which is basically a really big and powerful laser pointer.

“We are specifically trying to determine if there is a limit to the precision with which we can measure the relative positions of large objects,” postdoctoral researcher Robert Lanza told me in an email. “This would represent a fundamental limit in the actual information that the universe stores.”

And information (apparently) is not lost in black holes as per Hawking radiation. It remains on the event horizon of black holes and "theoretically" is where ALL the universe's information resides as entangled particles. It's from those entangled particles we perceive ourselves and our universe (is how I take it) as a projected hologram .
edit on 3-8-2015 by FlySolo because: (no reason given)

posted on Aug, 3 2015 @ 07:30 PM
link
If this were to be true, could we not figure out a way to hack this software to get ourselves more cheeseburgers with extra tits?

Is this what the illuminati have always known about, the big secret? How to hack the universe?

Cheese burgers with tits? You just blew my mind.

Or maybe this is all just in my head (or equivalent)

originally posted by: bananashooter
Pot heads have been sitting around talking about this stuff since before it was even cool.

Yeah lol. I remember doing this in the 70's, well I have notes anyway. I am a firm believer that this reality is a physical simulation. From my own experience and experiments that I have been doing for 40 years, my best guess is that matter is created as a material hologram using different kinds of quarks.