Despite reports that Cecil the lion’s brother Jericho had been shot dead by a poacher, a field researcher at Hwange Lion Research said on Saturday: “He looks alive and well.”

The Zimbabwe Conservation Task Force said on Facebook that Cecil’s brother, Jericho, was shot on Saturday at 4pm. “We are absolutely heart broken,” the statement said.

“I think this type of misinformation is characteristic of that particular source,” Staplekamp said.

Interesting about the source. The source is known to be untrustworthy (not CNN, lol, but the Conservation group).

That facebook page is from people that are actually there.

I trust their reports far more than a news group.


originally posted by: Liquesence
Now the headlines are changing:

"feared dead."
"may have been killed"
illegally killed, official says."

This is getting interesting.

I wonder what the agenda is here.


Given the international outcry over the first one, maybe we can expect to see Jericho's GoFundMe page any day now? Zimbabwe is in the midst of a national depression and financial crisis. Might as well milk all this outrage while we can.

Watch for a coupe de tat in Zimbabwe any day.

Something is cooking and cooking heavy over there.

That facebook page is from people that are actually there.

I trust their reports far more than a news group.


Exactly why I come to ATS for news. The Links.

They usually lead you to someone who actually knows what's going on.

Can we trust The Guardian?

Can we trust The Guardian?

He's both alive and dead until I see him to confirm his true state.
edit on 1-8-2015 by Liquesence because: (no reason given) 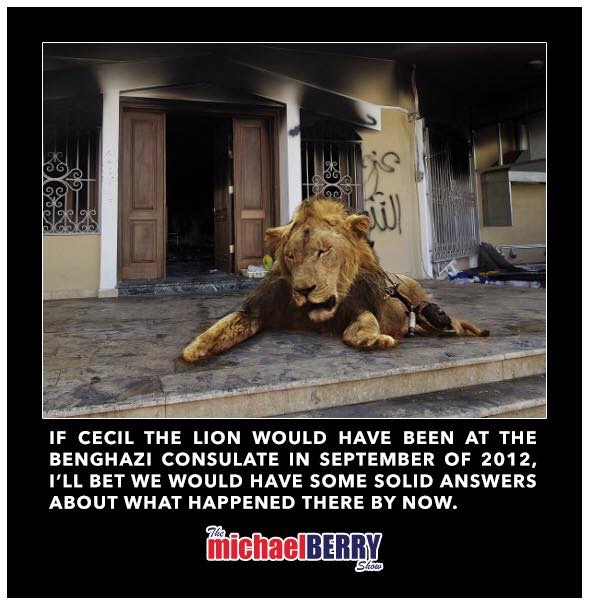 If President Obama had a Lion...It would look like Cecil.


O for # sake cant people keep the partisan bull# out of threads that having nothing to do with Obama?

Actually, Benghazi is more to do with Hillary.

If President Obama had a Lion...It would look like Cecil.


O for # sake cant people keep the partisan bull# out of threads that having nothing to do with Obama?


I didn't realize it was another serious thread about a dead cat.

Hippopotamus's kill nearly 3,000 people a year in Africa , Lions are quite peaceful by comparison.

originally posted by: ManBehindTheMask
Two Dentist in the area within a few weeks?

Must be an outbreak!

We need to ban dentists!

originally posted by: gortex
a reply to: butcherguy

Hippopotamus's kill nearly 3,000 people a year in Africa , Lions are quite peaceful by comparison.

I think it's just easier to avoid lions.

Really? That's amazing It goes against his nature. The study must be devastated over his loss.

And yet not even remotely close to getting even yet.

And yet not even remotely close to getting even yet.


Over the years? I wonder.
Lions and humans have been in Africa for a very long time.
I wonder what the score was before guns came to the continent?

I suggest reading the entire article.

Living With Lions When people and lions collide, both suffer. By David Quammen Photograph by Brent Stirton

Lions are complicated creatures, magnificent at a distance yet fearsomely inconvenient to the rural peoples whose fate is to live among them. They are lords of the wild savanna but inimical to pastoralism and incompatible with farming. So it’s no wonder their fortunes have trended downward for as long as human civilization has been trending up.

There’s evidence across at least three continents of the lions’ glory days and their decline. Chauvet Cave, in southern France, filled with vivid Paleolithic paintings of wildlife, shows us that lions inhabited Europe along with humans 30 millennia ago; the Book of Daniel suggests that lions lurked at the outskirts of Babylon in the sixth century B.C.; and there are reports of lions surviving in Syria, Turkey, Iraq, and Iran until well into the 19th or 20th centuries. Africa alone, during this long ebb, remained the reliable heartland.

But that has changed too. New surveys and estimates suggest that the lion has disappeared from about 80 percent of its African range. No one knows how many lions survive today in Africa—as many as 35,000?—because wild lions are difficult to count. Experts agree, though, that just within recent decades the overall total has declined significantly. The causes are multiple—including habitat loss and fragmentation, poaching of lion prey for bush meat, poachers’ snares that catch lions instead, displacement of lion prey by livestock, disease, spearing or poisoning of lions in retaliation for livestock losses and attacks upon humans, ritual killing of lions (notably within the Maasai tradition), and unsustainable trophy hunting for lions, chiefly by affluent Americans.


But conservation begins at home, among people for whom the sublime and terrifying wildness of a lion is no dream. One set of such people are the Maasai who inhabit group ranches bordering Amboseli National Park, on the thornbush plains of southern Kenya. Since 2007 a program there called Lion Guardians has recruited Maasai warriors—young men for whom lion killing has traditionally been part of a rite of passage known as olamayio—to serve instead as lion protectors. These men, paid salaries, trained in radiotelemetry and GPS use, track lions on a daily basis and prevent lion attacks on livestock. The program, small but astute, seems to be succeeding: Lion killings have decreased, and the role of Lion Guardian is now prestigious within those communities. I spent a day recently with a Lion Guardian named Kamunu, roughly 30 years old, serious and steady, whose dark face tapered to a narrow chin and whose eyes seemed permanently squinted against sentiment and delusion. He wore a beaded necklace, beaded earrings, and a red shuka wrapped around him; a Maasai dagger was sheathed on his belt at one side, a cell phone at the other. Kamunu had personally killed five lions, he told me, all for olamayio, but he didn’t intend to kill any more. He had learned that lions could be more valuable alive—in money from tourism, wages from Lion Guardians, and the food and education such cash could buy for a man’s family.

originally posted by: ManBehindTheMask
.....So why isnt everyone outraged that his brother was killed?

My theory is that the story is useless in creating manipulated outrage without both a photo of the dead lion and the identity of someone wealthy and western to direct said manipulated outrage at... CNN ran with a story before the puppet masters had all their props setup and before the audience had been properly conditioned.

The other half of my theory is pretty simple: "People are incredibly stupid and goddamned comically naive."

The other half of my theory is pretty simple: "People are incredibly stupid and goddamned comically naive."


I've come to the conclusion it's a choice some make for themselves.