Oh man I love Chik o Sticks! I also like Necco Wafers (especially the grayish/black ones), but always wondered what the weird, white powder stuff was...

My favorites are Butterfingers, Jolly Ranchers (only green apple and watermelon flavors), and Laffy Taffy (banana flavor only). I'm trying hard to stay away from sugar, so I think I'll quit reading this thread now - too tempting.

As for old man candy ... I do like the classic horehound stuff.

posted on Aug, 1 2015 @ 04:20 PM
link
Reese's peanut butter cups, M&M's both plain and peanut, But one thing I really like is those chocolate peanut butter oatmeal no bake cookies.

Those chick-o-sticks were about a foot long when I was a kid and you could buy them for 25 cents.

I like the no-bakes, but they lose their awesomeness when they set up and cool off. They are only really awesome for me when they are still spoonably gooey and warm. My mom used to add some coconut to ours.

i have some chocolate, dark chocolate, and white chocolate covered espresso beans that are off the chain.
got a pound for 10 bones

posted on Aug, 1 2015 @ 06:07 PM
link
Our local hardware store sells the old candy. Not the new fangled chick0sticks or anything like that. The rock candy. The little dime sticks of candy. Stuff like that. It all just variations on the theme of hard candy. Same stuff they've had in those old stores for as long as my grandpa could remember.

I like chickostick though. They are good. Anymore I am more of a chocolate, plain jane chocolate, kind of guy. I'd rather have fruit and cheese or something, honestly.

posted on Aug, 1 2015 @ 06:44 PM
link
I'm guessing no one will know what this is, but before he passed away, my mom and my grandfather used to occasionally make popcorn candy at Christmas. And I'm not talking about caramel popcorn. This is something else.

the store is called b a sweetie. one of the biggest candy stores in the states.
i go out there quite a bit. like the furry texan, i would rather have other things than candy most times but they have all the old school stuff out there.
anyone remember the old packs of gum, beemans and clove? they have those
i pick up a lot of candy critters out there as well.
salted crickets and such. i like to try and talk people into eating the stuff at work. lots of lolli type stuff with scorpions and crickets in it.
they also have atomic fireballs that are dusted with ghost pepper.
i pick those up too so i can rock people. my son took a couple packs to school last year and messed with people.

they also have all kinds of kick ass soda's..like the jones colas except hundreds of brands and flavors.

its a cool store

An ice cream parlor like no other! The new Sweeties Soda Shoppe will be MAMOUTH inside! The new soda shoppe will be over 5,000 square foot with over 150 seats plus a private party room that will handle 50 guests. the interior design is all about fresh ingredients and fun! why fresh ingredients? well, because the ice cream will be made in our own kitchen on premises using ingredients from local food vendors. 36 flavors of hard ice cream made daily. In addition to our own recipe hard ice cream, the soda shoppe will have an area for self-serve premium soft ice cream and yogurt for those guest that want to fill their own cups and choose from 36 different candy, nut, sauce, and fruit toppings! Order a root beer float and you will have a choice of over a dozen varieties of "PURE CANE SUGAR" root beers from a glass bottle. No "Corn Syrup" fountain here! As a matter of fact, there will be over 300 varieties of soda pops available (majority made with pure cane sugar) available to mix with whatever ice cream you choose for your float! The menu will include many fun unique sundae's and specialty items.....stay tuned!....

Sweeties stocks all of the National Brands, Regional Brands, and those hard to find candies. Sweeties volume allows us to purchase our 4,000 items DIRECT from over 130 candy manufacturers. This volume insures factory fresh products. Our top 5 managers have a combined 120 years of experience in the candy business. We are the EXPERTS in candy. Our retail and wholesale customers know us for having what they need in whatever quantity they desire in stock. Our inventory value is almost $2,000,000.00 at any given time!

My wife has this pet dream in her head about opening a candy store here in town. I told her that our town doesn't quite have the purchasing volume to support a candy store, and that she'd need to diversity the product offering to be able to keep the doors open. But her inspiration:

A place in Fredericksburg that we go to when we drive through. Fredericksburg is a special place....every small Texas town boasts about wanting to be "the next Fredericksburg". I just don't know if its possible. Its just...unique in what it does. its basically a getaway community...hard to explain. But if you are ever anywhere in the Hill Country...you have to see Fredericksburg. And try Fredericksburg Fudge. Only disappointment: they use cheap, microwave bacon for their chocolate covered bacon. its preserved and lasts long in the display, so i get it. But still disappointing.

Even more off topic: The Rockbox Theater is a must see for anyone in the area. Those folks have enormous talent.

But I ordered a bunch of cereal marshmallows off the internet a while back, I think 10lbs.

See, I was never allowed to have Lucky Charms as a kid -- and the marshmallows were always the best part. Now that I'm an adult, if I want to have a bowl of just cereal marshmallows, I will! 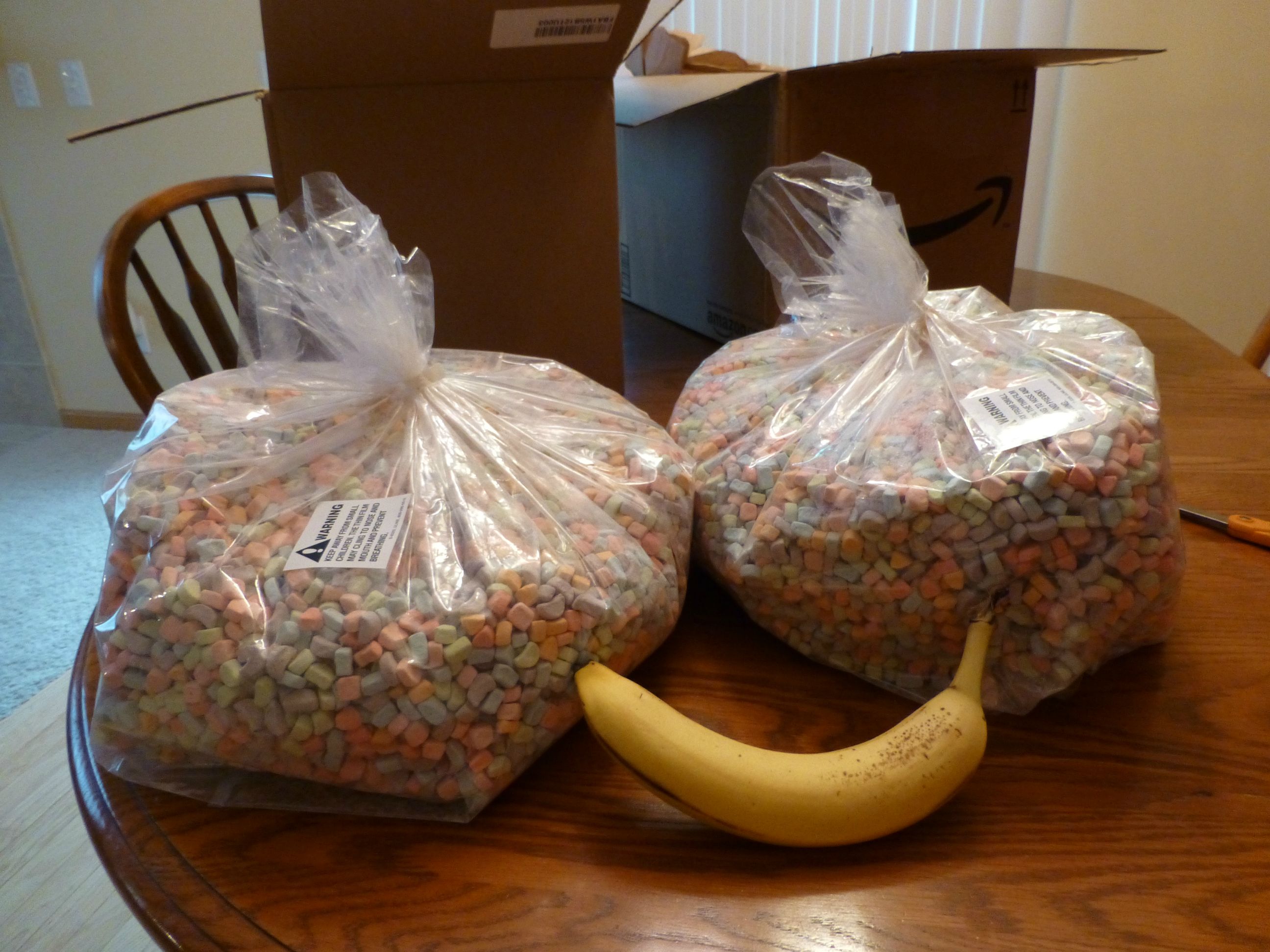 The marshmallows were the only part of Lucky Charms that made the cereal worth eating. I was never allowed to have those kinds of cereals either because I'd just open the box, pick out a bunch of the marshmallows and then refuse to eat any of the rest.

Oh, and the toy. You can't forget that.