Why I believe the Moon landings may have been faked

Thank you for providing conclusive proof that humans have never been to Earth.

Got it? What part of directional do you not understand?

Now, look at your pictures... See how the shadows have little difference in angle compared to the camera? Only a few degrees of separation. Now look at my image of the astronaut. The three lines in that photo are drawn on the surface, single plane. And they are nearly 90 degrees apart. If they were drawn correctly, in three dimensions, you would see that they are indeed 90 degrees apart. The astronauts shadow is perpendicular to the shadows of the rocks. Even allowing for small changes in perspective from the camera, no shadow should appear to be perpendicular to the other shadows in relatively close proximity.

If you can show me a photo where the shadows are 90 degrees apart like the one I showed, then we have something to talk about. But when I post a pic of shadows that are perpendicular to each other and you respond with photos that are nearly parallel, that is a waste of time.

Multiple light sources would create multiple shadows on 1 object. There's not a single object in the images you presented that have more than 1 shadow, therefore there is only a single light source.

Two light sources pointing in two different directions at two different objects....THINK Do you guys understand what a directional light is? Think spot light. If I point a spot light straight north at a person and there is a person directly to the east from the light, will the person on the east get a shadow from a light that doesn't hit him? NO. So if he has a shadow, it must be from a different light source... THINK

Is it really that hard to figure out guys?

Here, for the people having a hard time with 3D visualization... Please explain why you think directional light 1 pointed straight east would cast a shadow on an object to the south east which it is not pointed at... Two lights. Two objects. Two shadows. Is it really that freakin' hard to figure out? 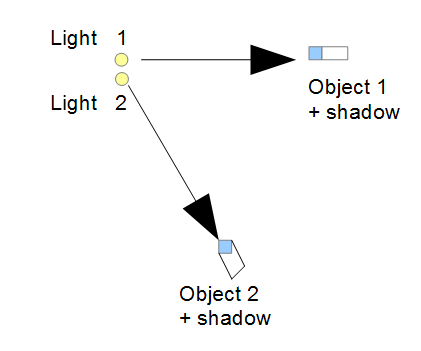 I apologize for the crude image, but I don't have any of the gucci software loaded right now and I am not going through that much effort for something that should already be very clear.
edit on 5-4-2017 by Vroomfondel because: (no reason given)


If you can show me a photo where the shadows are 90 degrees apart like the one I showed,


You did not show a photo with shadows 90º apart. But these shadows are not nearly parallel either.
www.mondlandung.pcdl.de...

So there's what? A single directed light source for every single object with a shadow?

Your argument makes no sense whatsoever.
edit on 542017 by TerryDon79 because: (no reason given)

originally posted by: Phage
a reply to: Vroomfondel


If you can show me a photo where the shadows are 90 degrees apart like the one I showed,


You did not show a photo with shadows 90º apart. But these shadows are not nearly parallel either.
www.mondlandung.pcdl.de...


I gave up trying to explain the angles in 3D to the others. With you I think there is a chance you will understand.

In the image with the astronaut, his shadow (for lack of a better term) points directly east. The shadows of the small rocks toward the bottom of the photo point more south than east. The angle between the planes of shadow is nearly 90 degrees as it appears in the image. However, that is not the true angle of divergence between them. The lines shown in the image are drawn at ground level. As such, they do not truly reflect the angle of the light or the shadow. They are however on the same plane. As you know, a plane is more than just a line. It is best represented by a rectangle extending infinitely in every direction - on that plane. The light source is above ground. The true angle of the light and shadow therefore is from the ground at the tip of the shadow, angling upward toward the tip of the helmet, and continuing upward to the light source. The light for the small rocks also angle upward but from the southeast, not due east. Once you add the third dimension to the planes and measure the angle of convergence between the two shadows you see the angle is very near to 90 degrees. One directional light source can not project shadows on multiple objects at 90 degree angles to each other. Two shadows pointing in drastically different directions must result from two light sources. Unlike the images of trees wher e the shadows are very nearly parallel, these shadows have a steep angle of convergence. If the light source was as far away as the sun, there could be no steep angle of convergence from two objects so close together.

Note - One skill required for my career was 3D visualization and the ability to interpret flat images in three dimensions. Remember the old drafting tests where they show you two views of an object and you have to determine what the other views would look like? That is what I am talking about. You have to imagine how what you are seeing got there and why. The astronauts shadow is pointing straight east. The shadows from the rocks are not. If it was one giant light source hundreds of thousands of miles away the shadows would barely diverge at all. But if the light source was much closer, you could easily see angles like this. One panoramic light or two directional lights would do the trick. Due to the angels involved I suspect it was two lights, rather than one. Either way, it was not the sun.

Did I say anything that freaking stupid? Did I? I said TWO. Not one light for every phucking object. There is your straw man argument. Congratulations. You have successfully completed the "I argue for the fun of it" course in record time. You made no sense and contributed nothing. Right on track... Well done.

You're looking at the images as if they're a taken of a perfectly flat plain. Add slopes and you get different angles.

So 2 light sources that only target certain objects, but don't cause shadows on others?

I would just love to see any examples of that taken on earth (I say earth because you'll use a moon image as your "proof").

Also, quit with the name calling. It's childish.


The angle between the planes of shadow is nearly 90 degrees as it appears in the image.

If the light source was as far away as the sun, there could be no steep angle of convergence from two objects so close together.

Why not? Did you look at the picture I linked? Have you considered the effects of ground slope as well as perspective?


Due to the angels involved I suspect it was two lights, rather than one.


Angels? I don't see any angels. Which light source is illuminating the area between the rocks and the lander?

I said the angle in the image with the astronaut is nearly 90 degrees and looking at the angle between the yellow lines indicating the directions of the shadows that is true. Its closer to 90 than 45. And I did indicate that the angle as shown is not the true angle because it is shown on a flat plane on the ground. The true angle would have to take the elevation of the light sources into consideration. Once you stand those lines up they are closer to 90 than they are as pictured. In the sketch I added above the angle between the lines is roughly 75 degrees. If those lines were shown in 3D they would be closer to 90 degrees. Imagine a right angle hovering in front of you with the vertex straight to your left. Keep the vertex fixed in place and start tiling the angle away from you. The more you tilt it the smaller the angle appears to be even though it never changes from 90 degrees. When you rotate the angle 90 degrees you will only see one line - no angle at all, even though it is still 90 degrees. That is what is happening with the lights. These are 2D graphics trying to explain a 3D anomaly. Its difficult to visualize, but, that was part of my job for 30 years. I am very good at it.

I did look at the picture you posted. I think there is something suspect in the way that image was marked. For instance, the big rock on the right, the line indicating the plane of the shadow only reflects the one edge of the rock which is more due to contour than inclination. The larger body of the shadow isn't even visible. Same for the rock shadows toward the back. Only the edge of the shadow is delineated which is as much due to contour as anything. The shadows of the people do not appear to be correct. If that is due to sloping terrain that would explain why the shadows do not appear to be more parallel and why the bush to their right has no shadow at all.

As for your last reference, I do now know what image you are referring to of a lander.
edit on 5-4-2017 by Vroomfondel because: (no reason given)


The shadows of the people do not appear to be correct.

Must be another light source, right?

As for your last reference, I do now know what image you are referring to of a lander.

The third one you posted here:
www.abovetopsecret.com...

originally posted by: Phage
a reply to: Vroomfondel


The shadows of the people do not appear to be correct.

Must be another light source, right?

As for your last reference, I do now know what image you are referring to of a lander.

The third one you posted here:
www.abovetopsecret.com...

No, as I said it could be due to sloping terrain. That also explains why the bush next to them has no shadow. That is a fine explanation for that image, but that image does not resemble the ones I posted which do not have such issues with terrain. At least nothing that is visible to my knowledge.

Sorry, I thought you meant an image you posted. If this was a staged photo shoot that would be easily explained. I would use a combination of diffuse background light to light the set and spot or directional light to highlight objects that are important in the image.

At least nothing that is visible to my knowledge.


You can't see the slopes near the rocks in the foreground?

But at the distance the lander is from the camera, I don't really see how you are able to judge the angle of its shadow.

blinks - you have got to be taking the piss

lastly - have you actually considered the scale of the apollo images ? - you are jumping from images < 20m across to images that show vast expanses of the moon

originally posted by: Vroomfondel
a reply to: choos

i get it but can you explain why in the third image of this post by you, you have drawn the lines from the base of the objects to the direction the shadows are in??

why is it that you can draw line from the base of of an object to the tips of shadows but others cant??

also are you claiming that Apollo 14 landed on flat ground?