The Game of Intimate Relationships

posted on Aug, 1 2015 @ 03:47 AM
link
My perception of intimate mating relationships has evolved with time and age, and I've watched my own marriage transform and teach me.
It goes through periods, cycles and stages, moments of transformation, when we have a "prise de conscience" a sudden view in retrospect of what we've been doing, subconsciously, and can now choose to be conscious of and do with full awareness, or not, according to context and circumstance.

My view is very close to that of Jung, and I tend to adopt some of his terminology for communication purposes, but don't want to make claims of exact similitude which would be misleading. Today I am thinking about the entity that becomes "us"; it seems to have a life of it's own, separate from the two entities that are its parts.

After twenty-something years together, hardly any of the behaviors or choices the other makes on behalf of the "us" is considered completely the responsibility of the actor. Blame has no more meaning, judgement is shared, more or less equally. I might not have been consciously aware of it, but I was surely a part of it- that has been observed over and over again in the lifespan of Us. We used to get into emotional discussions and arguments that would last the whole night, only to come to this conclusion once more.
So now we skip that part (when you have to get up early for work the next day, it is just a waste of precious sleep and energy! ).

I see us all as a combination of Yin and Yang, masculine and feminine qualities. Whether an individual identifies with one or the other, the opposite will remain slightly repressed- the internal being. The one which we project outside onto someone or something else. 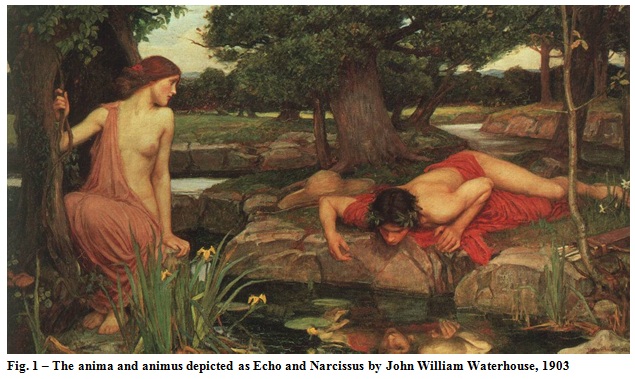 Since the term "to project" currently gets thrown around so much these days, I want to be precise- I am speaking about something we do not do consciously, we do not make or create- but rather, something that happens, something our unconscious just does, with or without our effort or consent.
Despite it being the current go-to insult or criticism for denying the perceptions or accusations others have of us, it is probably the basis of all interactions, unavoidable and essential. It is only "bad" when we feel we don't like the projection of another...we joyously or peacefully embrace it when it conforms to our preferences!

So we each have that internal "prisoner", sometimes regarded as the soul or savior, sometimes the demon or hidden malevolent troublemaker, that pulls strings and causes momentary skips, stumbles or fits of "not being my self".

I have an animus, an internal man, with his own character, temperament, preferences, and patterns of thought and belief. He is concerned with the well being and survival of the "I", of it's reproduction and creations. It values confrontation, opposition, contrast, hierarchy and power struggles. It thinks in terms of objects and strives for objectification, concretization, analyzation, and categorization. He seeks pleasure and light.

My husband has an internal woman or anima, who is more vague in form and changeable; adapting to others and environment in harmony. She has wild wisdom of nature, secret connections with other life forms, which blur the lines between objects, make categorization meaningless, reduces analyzation to nonsense. She values equality and bonding, cooperation and symbosis. Relation, the action in between objects, is her focus and value. She seeks wisdom and knows the potential for it in challenge, and the darkness of difficulty.

Upon meeting potential mates, we give off signals and direction in subconscious ways, which tell of that internal mate and it's nature. We either feel drawn to their particular anima or animus or not, depending upon our ability to identify our self with it, and the current state of relation between our conscious identity and that internal one.

In other words, if your outside man is in conflict with the internal woman (or vice versa), so shall your relationships be, as she shall become possessed by your anima, and what was once hidden emerges for all to see in a character play of Us.

This only gets more intense with time, as the possession and projection is reinforced.

We influence the behavior and views of our partner is ways that are subtle, turning them into an avatar of our internal personage. Though we came together at the first because they were already similar anyway.

Through this play, we can each work on making our individual entity more creative and cooperative on it's own. The internalized character can evolve past the "hero" or the "villain", "angel" or "demon", into something much more powerful and balanced.

Because of this view, neither of us bother making comments about those couples you run across sometimes, in which you ask each other in the car on the way home from dinner at their place- "Why are they together?? Why does she (he) put up with him (her)?? One is soooo nice, the other is such an A-hole!"

Because we know now, they are each both of those roles, she is secretly an A-hole, he is secretly a sweetheart (or the other way around) and they have just chosen to identify with one side or the other for the sake of the play of Us.

There are times when it is constructive and necessary to take your projection back within, isolate yourself and have a little talk inside. Work on that relationship you have between these individuals as parts of your own individual entity. But don't expect your partner to magically enact the changes your parts have made- he or she will take time to adjust to such transformations... and sometimes can't at all.

I can say whatever I want about my husband, good or bad, but I cannot completely deny my complicity in whatever behavior he carries out. Same goes for him. Even if I am not directly evolved in an event, I was intimately involved in the formation of the kind of man he is and his reactions and perceptions of the world. Same for his involvement with me.

Personally, I think we did well, and he helped me become a better individual. He has said often he feels the same. The Us can be painful or pleasurable, a battlefield or a garden of Eden, but no matter what, it brings us gifts to learn and grow from!

posted on Aug, 1 2015 @ 07:21 AM
link
a reply to: Bluesma
Wonderful! a special sharing from you both there, you certainly havent got expresion issues! Bon Voyage