Fair point, but just because Litvinenko betrayed the FSB, Putin is justified in murdering him?

It's also in every American movie and novels too lol. Everyone knew Putin didn't like this guy yes .. So if "this guy" goes missin who u blame ? Putin... Now who does this benifit ?

A bullet would have been easier to deliver .


There are many things wrong with the “Putin did it” story. For one there is no motive, even with Litvinenko being a critic of Russia, he was no threat whatsoever to Putin. The man worked with Chechen terrorists and the Israeli-Russian oligarchs. But just assuming that there was a sufficient motive to kill him, think about this: Why would Russia use a very rare, very expensive, and easily traceable radioactive substance to kill him instead of some cheap poison or just shooting him? Why risk smuggling radioactive material into the UK which is an act of war?

But that is exactly what the UK/US media would have you believe. They want to say that Putin had someone sneak into the UK with polonium and poison Litvinenko with it. It just isn’t plausible. It’s actually absurd.

Alexander Litvinenko who was formerly FSB fled to the UK to avoid court prosecution in Russia, worked for a shady Russian oligarch, Boris Berezovsky. Boris Berezovsky just so happens to be the Israeli-Russian oligarch who lives in London after fleeing the Russian judicial system for a multitude of crimes too long to list. He was on Interpol’s most wanted list. Here is the grand prize. After the US and UK press branded Putin with the poisoning despite there being Zero evidence, (something the US is very well known for now) investigators were tracking down the traces of polonium in the UK. They detected traces of Polonium at Berezovsky’s office and residence! Now I do not know about you, but in my place of work, and certainly in my house, I do not have rare radioactive substances. It is not something you just get at the market or pick up by accident walking through the park.

Mr Litvinenko, an ex FSB agent, is someone who would have seen all the little tricks and corrupt goings-on that link Vlads goons to organised crime. Over time, he see's the light and seeks asylum in the UK, where he writes about his ordeals and Vlads shenanigans with the Russian mafia and other organized crime syndicates.

Then, one day out of the blue, he is mysteriously poisoned. He eventually succumbs to Polonium 210-induced acute radiation syndrome some 23 days later.

It really does sound like something out of a James Bond movie. 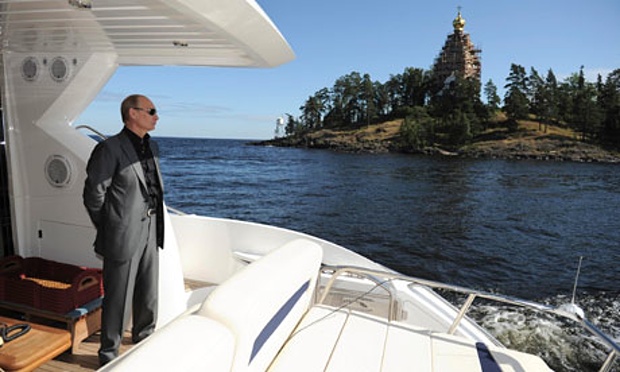 Who does it benefit?

As in, don't (expletive deleted) with Putin.

This also explains their 110% voter turnout.


A bullet would have been easier to deliver


A bullet would have been too obvious too quickly , this way gave the assassins plenty of time to escape both the scene and country.

posted on Jul, 31 2015 @ 02:04 PM
link
I don't believe it. It's too simple. It's too easy to put the blame on Putin, even without all of the other inconsistencies. That's what bothers me. So Putin is supposed to be a real bad guy and former KGB. This makes him look stupid. I suppose that's the intent. He's supposed to be so hard headed and vile he kills people openly and still happily smiles in news segments.

Russia is no angel, that's for sure. The Crimea thing proves they don't have much respect for international rules or the sovereignty of other countries. They didn't even bring the matter to the UN. They just stormed Crimea with some operatives and used the pro-russian supporters to annex it. In the process, they've lost mucho credibility on the world stage. Things are not looking up for them. They need to get rid of Putin or anything which reminds the world of recent events. Still, the way that Russia is so opposed to the spread of NATA in european countries, and its work with Iran and China in a anti-US manner, continues to give it a hostile image. I guess the communists have always been looked at negatively in the west and not much has changed. But isn't that in itself a bad omen?
edit on 31-7-2015 by jonnywhite because: (no reason given)

posted on Jul, 31 2015 @ 02:10 PM
link
wat an fuzz about an defected spy...?????????!!!!!!!!!!
spy's are just as criminals above the law.. and are disposible after use... not only in Russia but worldwide
that the case was blowed up now after 10 years proves only that there's an progrom going on to Russia
as andswer for the veto recently...typical western propaganda as an spoiled child that diddend get wat it wanted to...
lolll russian missiles on cuba were for the US enough reason for an 3 worldwar.....
now the west places missiles at the russian borders and the russians must be silent about it?
edit on 31-7-2015 by ressiv because: (no reason given)

-------Russia is no angel, that's for sure. The Crimea thing proves they don't have much respect for international rules or the sovereignty of other countries. --------
lolll lolll lolll an democratic electeted gov. was taken over WITH western support ! that was an ILLEGAL act as wel!
and approved by the US aswel
but that fact is kept out of MSM

Ducking and weaving,defending his people. How much longer will they poke the bear before he strikes ?

You mean ducking, weaving , and lying to his people.

Putin has brought on what he is getting all on his own...which shows he doesn't care about his people, or he would do what it takes to get the sanctions lifted.

originally posted by: tsurfer2000h
Putin has brought on what he is getting all on his own...which shows he doesn't care about his people, or he would do what it takes to get the sanctions lifted.

We all know Russia did it. Mission accomplished Russia.

In 2012, Berezovsky lost a London High Court case he brought over the ownership of Sibneft against Roman Abramovich, in which he sought over £3 billion in damages.[22] The court judged Berezovsky as an "inherently unreliable" witness, who "regarded truth as a transitory, flexible concept, which could be moulded to suit his current purposes" and that "At times the evidence which he gave was deliberately dishonest; sometimes he was clearly making his evidence up as he went along in response to the perceived difficulty in answering the questions."[23][24] The court concluded that Berezovsky had never been a co-owner of Sibneft.[25]

This guy was tied to the bonds the vulcan group used to initiate the soviet downfall. Provided muscle apparently to Roman Abramovich.....