That was my first guess as to where the plane actually landed.
I seem to recall Diego Garcia having some unusual activity around that time as well.

originally posted by: CallmeRaskolnikov
interesting for sure. add this to the list of all the other odd coincidental hints in movies of events that would later unfold.

Give me 1 single item from a movie or TV show that was definitively a hint for a future event.

911 was a common pattern for distress before 9/11 yet conspiracy folks seem to forget that so any reference to 911 has to be a out the attacks.

I can't find the link, i remember reading a quote from a u.s commander saying they were working towards building something like this^.

Here's a bit of trivia from the wikia page:

The deal that Phillips made with Zola is based off the Operation Paperclip conspiracy; where the United States recruited several Nazi scientists in the aftermath of World War II. Interestingly enough one of the operation's projects, MKUltra, included torture and brainwashing.....

Operation paperclip from what I remember did happen so it is not a conspiracy, we will see though if they find the wreckage in this area. In the Dark Knight, Sandy hook was circled in red on one of the maps they showed and we all know pre 911
Warnings in movies and shows. I would like to know who or what is putting these in movies but everyone has their own theories.


originally posted by: CallmeRaskolnikov
interesting for sure. add this to the list of all the other odd coincidental hints in movies of events that would later unfold.

Give me 1 single item from a movie or TV show that was definitively a hint for a future event.

911 was a common pattern for distress before 9/11 yet conspiracy folks seem to forget that so any reference to 911 has to be a out the attacks.


Obviously you missed guardians of the galaxy it should be obvious were being primed and warned about future conspiracies where talking animals and rodents with guns save the planet.

Sry about all my sarcasm

No. You've got the coordinates wrong.

Chairman Singh says the ship was off the coast of his county. India.

posted on Aug, 1 2015 @ 09:38 AM
link
I am not going to say that there is any credence to thinking there are secret messages from our puppeteer overlords in superhero movies, but in my mind these films are becoming increasingly associated with tragedies and disasters.

I don't think I'll ever be able to watch the Dark Knight Rises without feeling some level of unease. First it was its (much better) prequel with Heath Ledger, but that was nowhere near the level of the creepy aura I get from this film. I am unable to separate it from Aurora, Sandy Hook, and the Germanwings crash in my head. I'm getting this weird irrational feeling that those movies are cursed or something.

posted on Aug, 1 2015 @ 06:11 PM
link
a reply to: iamcreation>>> Very odd that this isn't getting more attention. If this is the piece of the plane, then what was believed to have happened, did. It was taken to Diego Garcia or ditched in the open ocean very close to there so operatives could be retrieved. The plane WAS sighted flying over the Maldives very low and the authorities refused to follow up and instead wasted time and resources looking in a location they knew was the wrong place. Now if, as some say, this was a planted piece, which would be odd because it was found close to where it was speculated to be headed, then that would point to the other theory, that it was taken to a Russian republic or Pakistan and piggy backed on another jet's transponder and radar.

I am surprised also but time will tell. My theory on what happened is that the plane was remotely taken over and flew over one of the most remote part of the Indian Ocean. For what reason, there are a few options, one being Rothschild and Freescale technologies conspiracy and another about liquid metal patent. 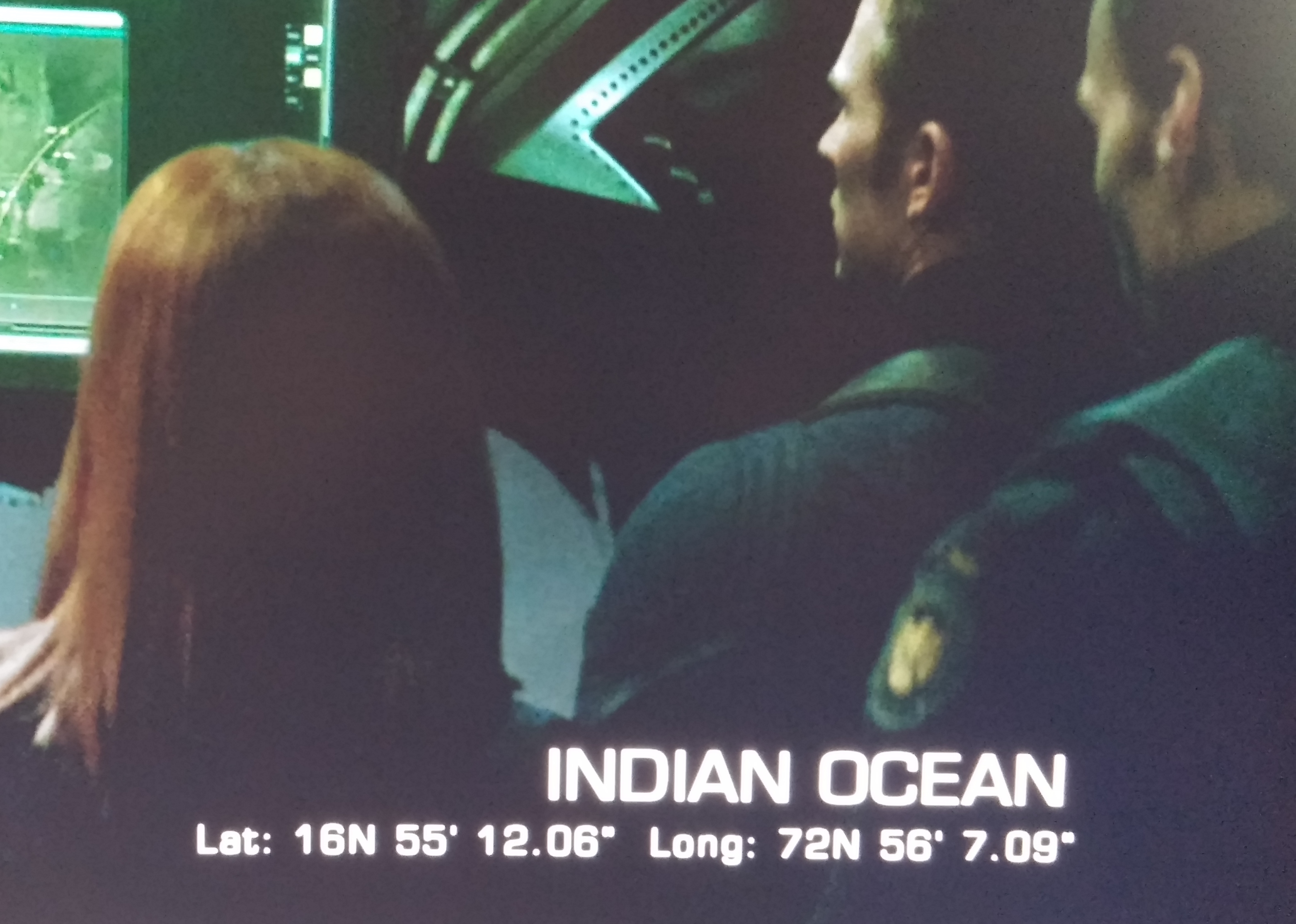 The Co-ordinates they show is the PLANE Captain America and Black Widow are flying on and they are talking about the ship. So the Lat has to be changed to S and Long has to be Changed to E. Oh and by the way, your co-ordinates would be in the Arabian Sea, 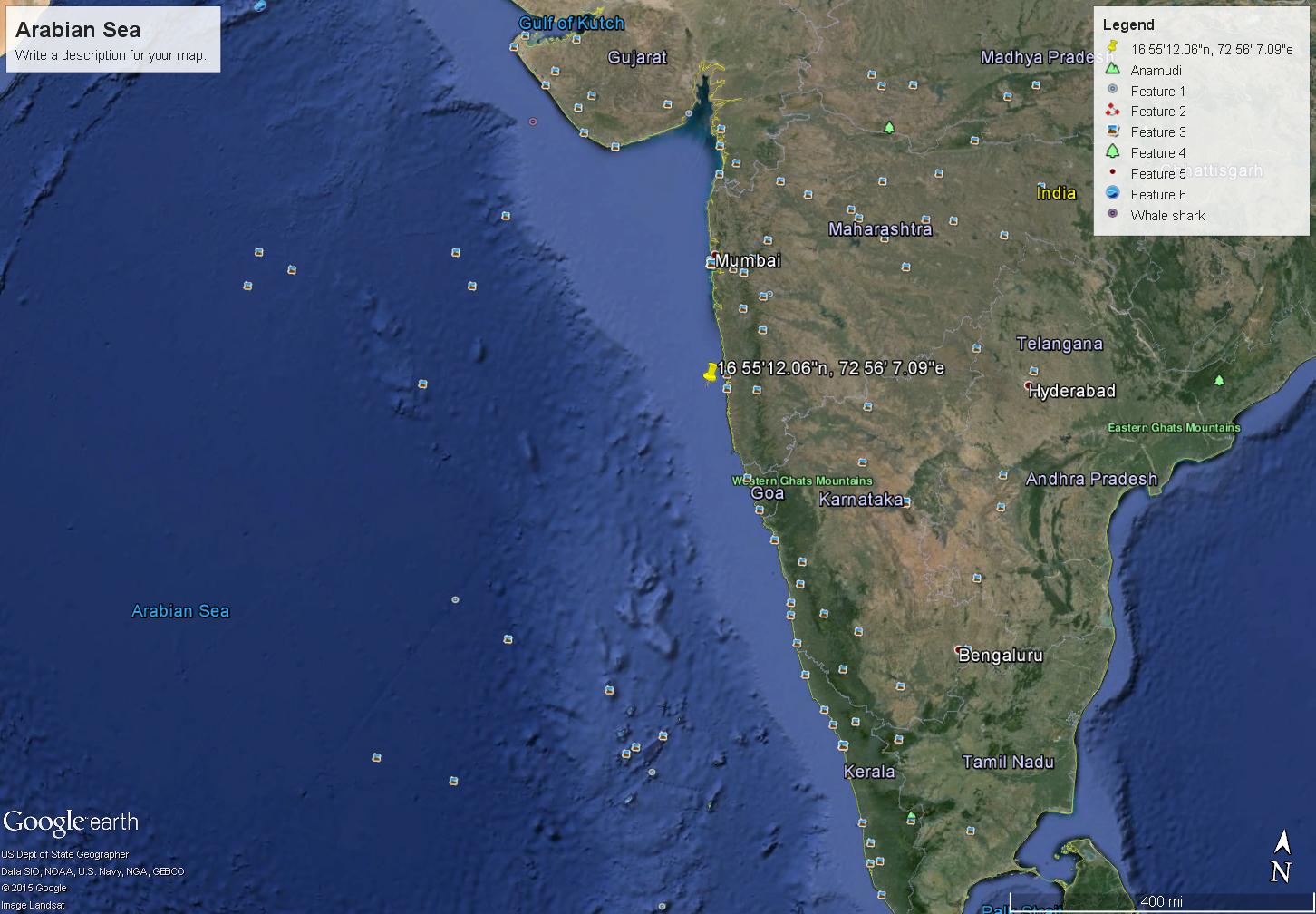 Why do both need to be changed?

Why does the Indian guy say it happened near his sovereign waters? Your coordinates don't put it anywhere near India.

Imdb confirms what I say too..

Like I said in that scene they are flying on a PLANE then it shows them standing in the PLANE and Indian Ocean and Co-ordinates show up telling us where THEY are in the PLANE. The ship they are talking about has nothing to do with the co-ordinates. The reason I didn't use the other Co-ordinates is for the fact they used Indian Ocean and not Arabian Sea. Also these Co-ordinates match with how much fuel and the search area arch from Australia and don't you think India would have picked up a rogue plane flying over land without any transponders on? If the plane did crash 20 miles of the coast of India people would have seen and heard the crash. I hope this clears things up for you.

But, the movie has nothing to do with MH370.

You're changing things to fit your theory and ignoring the narrative.

The coordinates given are for the ship, not long after they tell us where they are, Cap jumps out of the plane to get aboard the ship.

The Arabian Sea vs Indian Ocean can be explained by lazy writing.

Okaledokalee,
You are fitting it to your opinion too
The coordinates for the ship are on the planes computer monitor by the way.
But only time will tell.....

posted on Aug, 2 2015 @ 07:33 AM
link
a reply to: iamcreation>>> They're trying to say that its possible the ocean currents took the piece of the plane that far but look at the facts. The distance from Diego Garcia to reunion Island is about 500 miles, maybe a little less. The distance from the search area to Reunion Island is 2,000 miles. And the current they said would have carried it still goes right past Diego Garcia. The pilot had Diego Garcia's airstrip on his simulator. The plane was seen flying very low over the Madlives headed south. I think the pilot was paid to help steal the plane and killed off the other crew and passengers when he took it that high in altitude and let the cabin air pressure release. Then they got what they wanted and ditched the plane in the ocean near Diego Garcia where they were picked up by a waiting boat. Maybe the pilot got a .45 bullet in the head to tie up loose ends. But the fact remains that our government knew what happened and were complicit in it and did nothing to bring the perpetrators to justice.

originally posted by: Dutchowl
But the fact remains that our government knew what happened and were complicit in it and did nothing to bring the perpetrators to justice.

Nope, what I'm saying fits in the narrative of the movie and the coordinates are explained on IMDB.

This is for those of you how might find this interesting, I was watching Winter Soldier again last night and came across another piece of the puzzle. At 23:37 Pierce is talking with the Council and in the background is a map

Overlayed on the map are 2 boxes with red arches 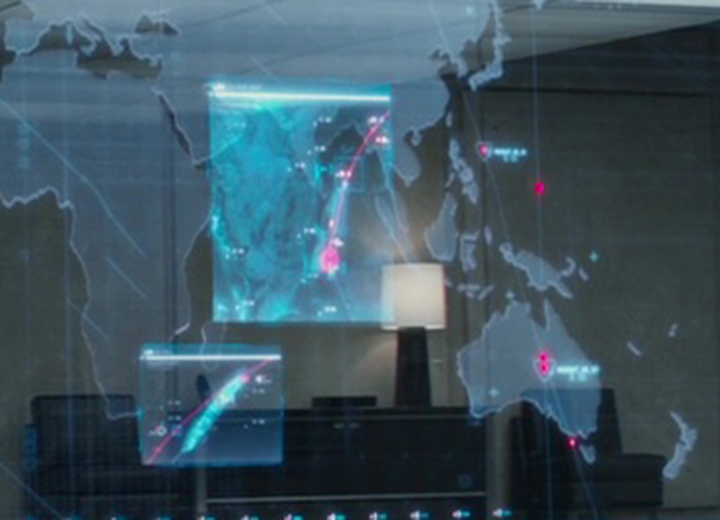 One curve is just South of Maldives and curves into Indian Ocean, the other just past the south tip of India.
Now I overlayed the image onto Google Earth aligning the 2 Maldives images as close as I can: 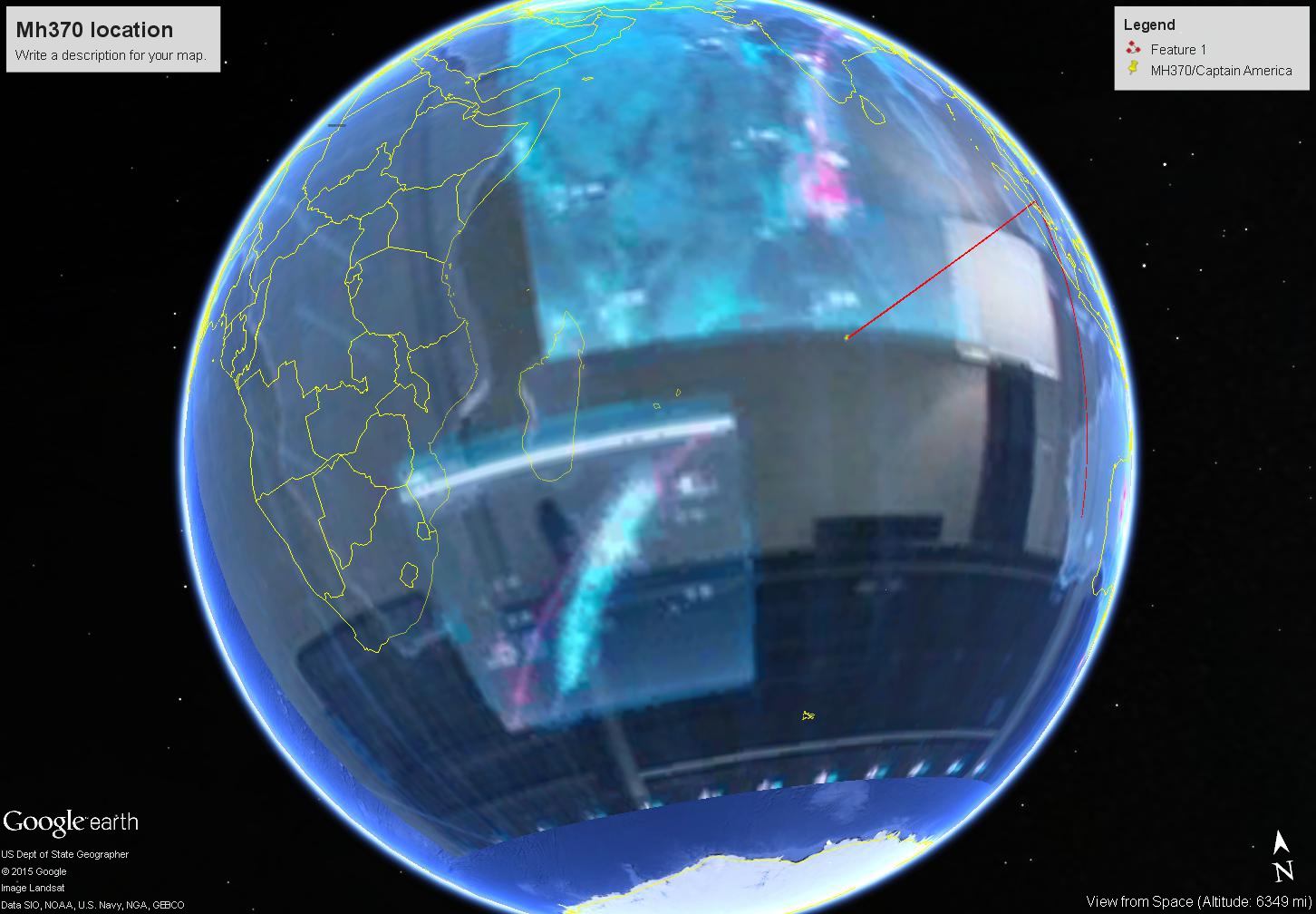 And wouldn't you know it the 2 lines converge very close to the Co-ordinates in my OP.
Have at it everybody.


I was going to post this a year ago but never got around to it but now since they might have found a piece of the plane it is relevant and might show where the rest of the plane is located. MH370 disappeared March 8, 2014 and The Winter Soldier opened April 4, 2014, so the plane was fresh in my mind. At 3:32 into the movie, bottom right corner words appear, Indian Ocean with co_ordinates Lat 16N 55'12.06" Long 72N 56'7.09". You have to change Lat From N to S and Long N to E. 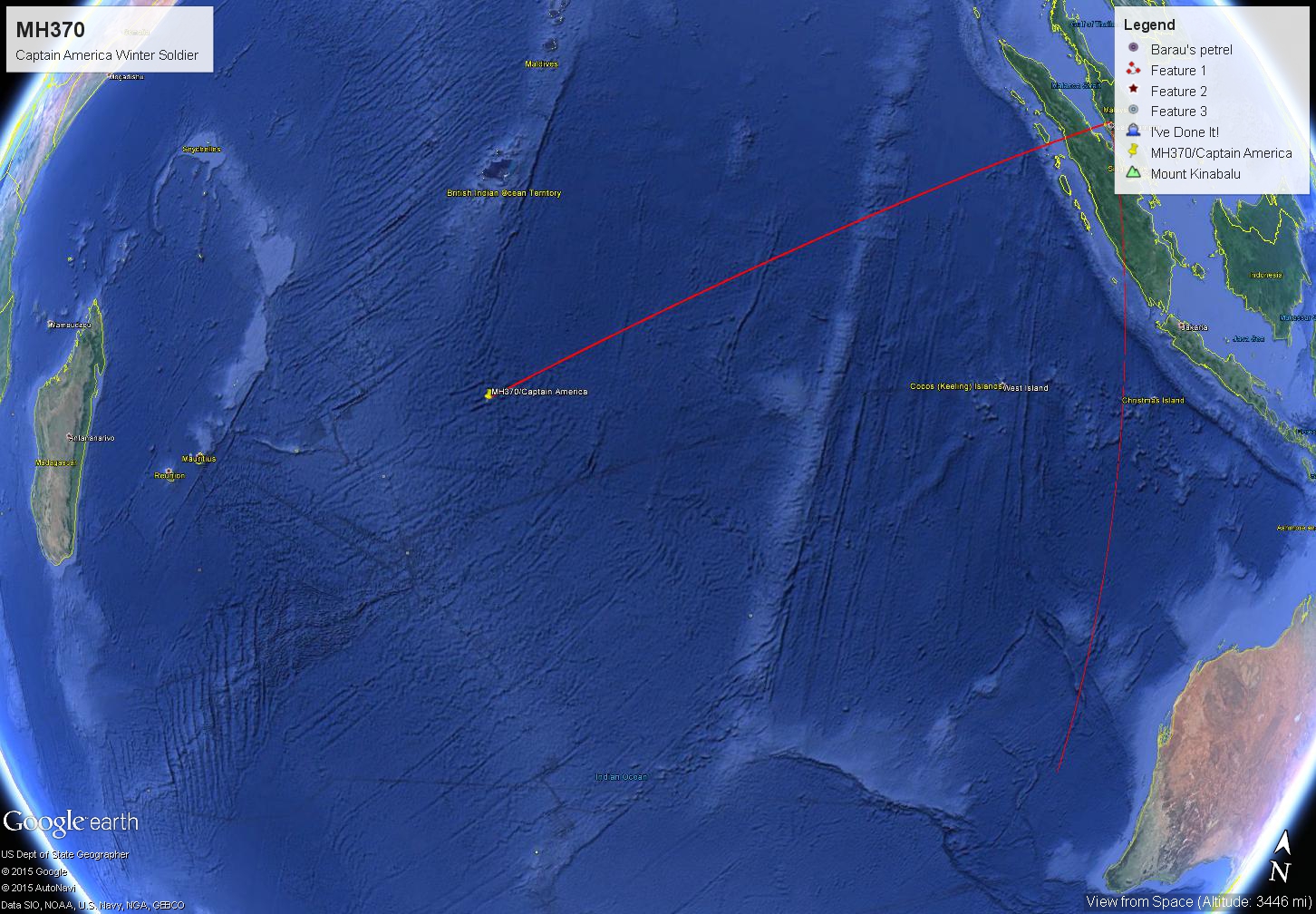 It showed just East of the Maldives and Reunion Island. I did some Measurements from where the Australian search was, roughly 2200-2300 miles, and the co-ordinates from the movie are roughly the same distance from Kuala Lumpur.
So I bet they will find the plane close to those co-ordinates and one has to ask the question: How did the coordinates in the movie match where the plane might be found? Insider information or something else. Remember the Dark Knight and Sandy Hook......