The point is, the cop lied about being dragged, he actually dived into the car window to try and stop Dubose from driving off. He obviously lied because he knew it was an unlawful shooting, there's no getting around that.

If he was actually interested in being a big hero and safely stopping Dubose from leaving, he would have gone for the keys in the ignition, rather than instantly going for his gun and shooting Dubose in the head.

It was cold blooded murder.... hence why his been charged for murder.

Thank you Sremmos. We've seen this a lot lately. Someone actually cooperating with the police and still murdered. It's sad. Yes, we usually only see it when it's a black victim and a white cop, but I blame that on the media. This isn't really a race thing, it's more a poor thing. The cop did wrong, and in a classic tactic, tried to turn the victim into the villain. I respect law enforcement, but it only takes a few bad apples to spoil the whole bunch.

posted on Aug, 2 2015 @ 01:50 PM
link
He was dragged as has been determined in the stabilized video. He was moved several feet in a second. He doesn't have to be dragged a long distance to be considered dragged. Whether he had his arm in the car of his own volition or not is immaterial as DuBose attempted to drive off with the officer in the window.

Mind you, the officer didn't even reach in until it was obvious DuBose was attempting to drive off. He probably pulled his gun at that instant as that is what officers are trained to do when a person is attempting to flee. Hence "stop or I'll shoot".

Also, what the officer perceived in the moment may not have been what the reality was after the fact.

I wager he gets off completely as they went for too high a charge. Manslaughter would have been a more likely to stick charge.

a reply to: Subaeruginosa

posted on Aug, 2 2015 @ 01:51 PM
link
Wrong, as has been determined he was not cooperating. You can't just offer a name when operating a vehicle, you have to have a physical drivers license. It is at the discretion of the officer to determine how to proceed if no license can be produced.

You are going to twist what Shamrock said that bad?

That was in a response to if he is required to take the person out of the car and cuff him.

It was not to show that he wasn't cooperating.

How is answering the question and saying he will ID him self not cooperating?

He said he thought he had his ID on him but guess he didn't, paraphrased, but he will provide his info so the cop could run it.

Please tell me how that is not cooperating.

Officers are trained to immediately draw their weapon if a subject looks like they may flee? Really? Source?

Are officers also trained to dive into windows of a subject looks as if they may try to leave the scene of a traffic stop?

Have you never heard of "lesser included offense instruction" for trials?

You never did explain how it was that he was dragged, can you explain that now? It wasn't his arm, as that was moving freely. The victim didn't grab him. He wasn't stuck on the door post.

posted on Aug, 2 2015 @ 02:13 PM
link
Because the officer asked him to step out of the vehicle and he wouldn't, why are you intentionally ignoring the law?

It didn't "appear", it was obvious what was about to happen.

(post by greydaze removed for a manners violation)
Shamrock6

Yea so I've noticed over the last few pages that you very rarely answer a question directly, if at all.

I can only presume at this point that that means you can't answer them, which is why you try to turn them around or deflect them.

Call it deflecting all you want, pointing out the obvious holes in your logic is simple.

originally posted by: WeAre0ne
It's somewhat funny to read the replies from some of you... You wanted so badly for me to not supply the stabilized video so you can attack my character. After all, it's all you got.

Anyway here is my stabilized video:


The car was clearly moving before the fatal shot. Not very far, but just enough to make the officer fear being dragged down the street at a much higher speed, and receive serious bodily injuries, and or get killed by Sam DuBose.

It's unfortunate that all the source videos have been blurred to hide the graphic portion of events, because the blurred spot hides some of the movement in the background, and makes it difficult to see the vehicle moving. Fortunately the movement is still visible.


WOW your 'stabilized' video you made just DEBUNKED yourself.

CLEARLY NOW THE OFFICER, was NEVER drug by the car, NEVER was his arm caught in the vehicle
and the COP CLEARLY SHOOTS DUbrose for NO REASON...

Im glad you posted this even though it disproved EVERYTHING you have been arguing GOOOD GOD i love ats..

YOU CLEARLY Just admitted Officer KID LIED and the murderous cop who shot Dubrose LIED about being caught up
and dragged by the car....

The officer never said he was in fear of being drug by the car or was in FEAR of his arm getting caught
in the car and then dragged. HE SAID AND HIS BUDDY both said he was being dragged down the road by the guy
BOTH LIES TO COVER THEIR ASS.. The cop needs 20 years atleast
edit on 2-8-2015 by starfoxxx because: (no reason given)

posted on Aug, 2 2015 @ 06:13 PM
link
Tell me, where is the parked car at
The beginning of the video? Where is it at when the officer is getting off the ground?

How do you decipher what is due to him being dragged or him falling back?
You think he fell back in the same exact spot or could he have rolled to a new stop?

posted on Aug, 2 2015 @ 06:31 PM
link
a reply to: raymundoko
To what "parked car" are you referring?
The shot at the end of the video with the "parked car" is on the other side of the road....the side with the guardrail. It isn't even seen in the originally released video of the officer approaching the car.

The only claim that I have made was that the officer was drug by the car, and he clearly was. The stabilized video shows he was moved a few feet before the fatal shot, and even further after the shot. So I don't know what video you are watching, but your observation is a bit off...

The fact of the matter is, the cop reached in the vehicle to try to prevent the suspect from putting the vehicle in drive or to try to turn the car off (you can see him reach in that direction first). He did not succeed, and at that point the officer's life was in danger because he was partially inside the car and the car started to move. The officer then grabbed the suspects seat belt to hang on, I'm guessing in fear, because that is a natural reaction when you are partially in a vehicle and it starts to move, you hang on for your life. Once you make the decision to "hang on" when a vehicle starts to move, you can't let go unless you want to risk road rash, and possibly broken bones. You are kind of stuck until the vehicle stops moving.

Clearly, since the suspect was not following the officer's order to "stop" from driving off, the officer feared he would have to hang on to the car and get dragged down the road at high speeds. Either way, the officer feared he was going to get injured from that point on. He must have felt it was necessary to incapacitate the driver to get the car to stop. Unfortunately it didn't get the car to stop, and it started to speed up even more. That is when he had no choice but to let go and face the injuries of jumping from a moving vehicle, which he didn't want to do.

You see, police officers can't hesitate when they fear their body and or life is in danger. It could cost them. In this case, the officer can't wait until he is dragged all the way down the road by a vehicle before making the decision to forcefully stop the driver who wont willingly stop. He had to make the decision before he is fully dragged down the road and possibly injured. He had to stop him before it was too late. All things considered, the officer foresaw himself having to hang on to the car and getting dragged down the road because the driver was not stopping. So he had no choice but to make the decision to forcefully stop the driver.

I still hold that the officer is not-guilty. His body and life was in danger.

As for his comments and his "lies" that seemingly don't match the story to some of you, I think it comes down to semantics. 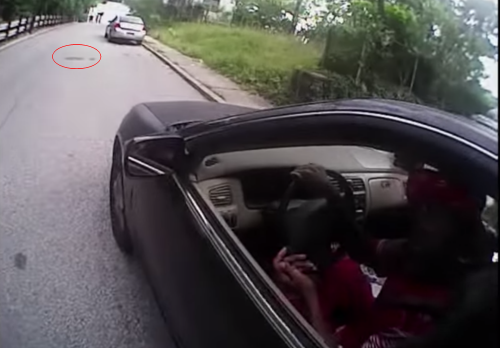 This is where the officer got up from the ground. See the parked car, and the dark spot? 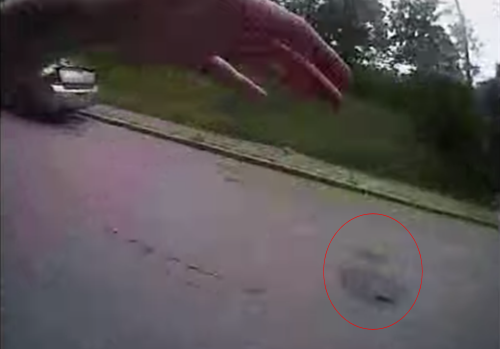 Clearly, the officer was dragged down the road by the car, nobody can argue that from this point on.

If the officer didn't shoot the driver, do you think the driver would have stopped the car and let the officer safely let go and step away? Most likely not, he would have probably dragged the officer until he was forced off. The officer had no time to find out the answer to that question, so he forced the driver to stop, hoping the car would stop with him. Unfortunately, it just made the driver accelerate even more.

posted on Aug, 2 2015 @ 07:21 PM
link
Here is their position when the suspect started the vehicle. Take note of the position of the vehicle seen in the background. 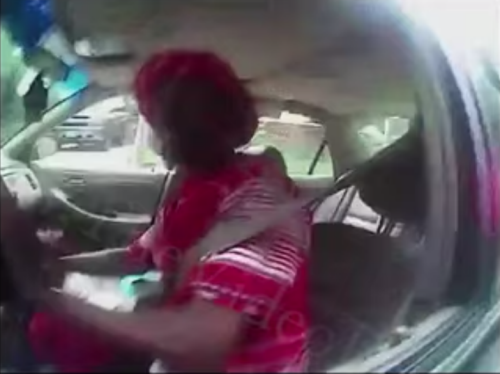 Here is their position the instant of the fatal shot. Notice the new position of the vehicle in the background. 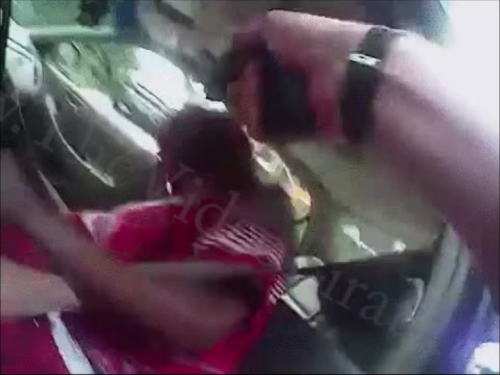 From this point on, nobody can argue the vehicle didn't drag the officer before the shot.

These screen shots were captured from an uncensored version of the video because the censored version everyone is looking at hides the movement of the background, and is causing people to think they were stationary until after the fatal shot. The fact is, they were moving down the road when the shot took place.

So you're saying that after the officer reached into the car, he became concerned that he would be dragged down the road so he held on to the seatbelt because it was his only choice but then after he shot the dude in the head suddenly not hanging on to the seatbelt seemed like a good idea so then he let go after being dragged.

All of which happened in a distance less than the span of a single car driveway. And he wasn't trapped by the steering wheel, the victim didn't have a hold of him, and he wasn't hung up on the rear edge of the door. But because he grabbed on to the seatbelt for a literal split second before the shot, he was dragged.