originally posted by: WeAre0ne
a reply to: Sremmos80
When I get home, I will do the final render, and upload it to YouTube, and provide a link.

I am sorry if you feel offended, I thought that you would be able to justify your statements on the video, which were understood, by myself, to afford you a unique perspective. When you then went on to contradict yourself is when I felt the need to question your previous assertion. It is, after all, an important aspect to the thread.
My apologies again if you feel attacked.

starfoxxx, the video clearly shows the car is moving before the gun is fired.
These are facts.


The officer tells him to take his seat belt off the officer then goes for Dubrose's door handle.
Dubrose covers the door lock THEN turns car on 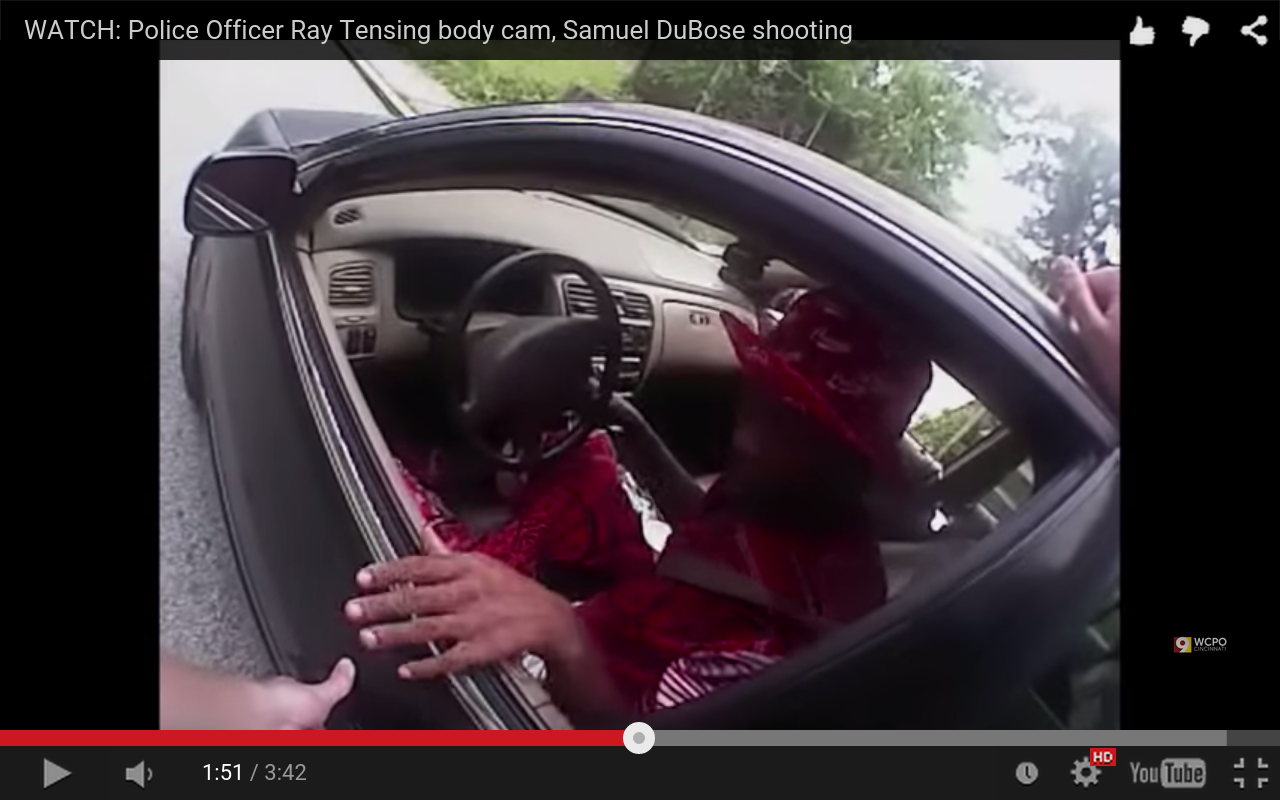 Officer still not in fear for his life, REACHES IN AND tries to GRAB Dubrose 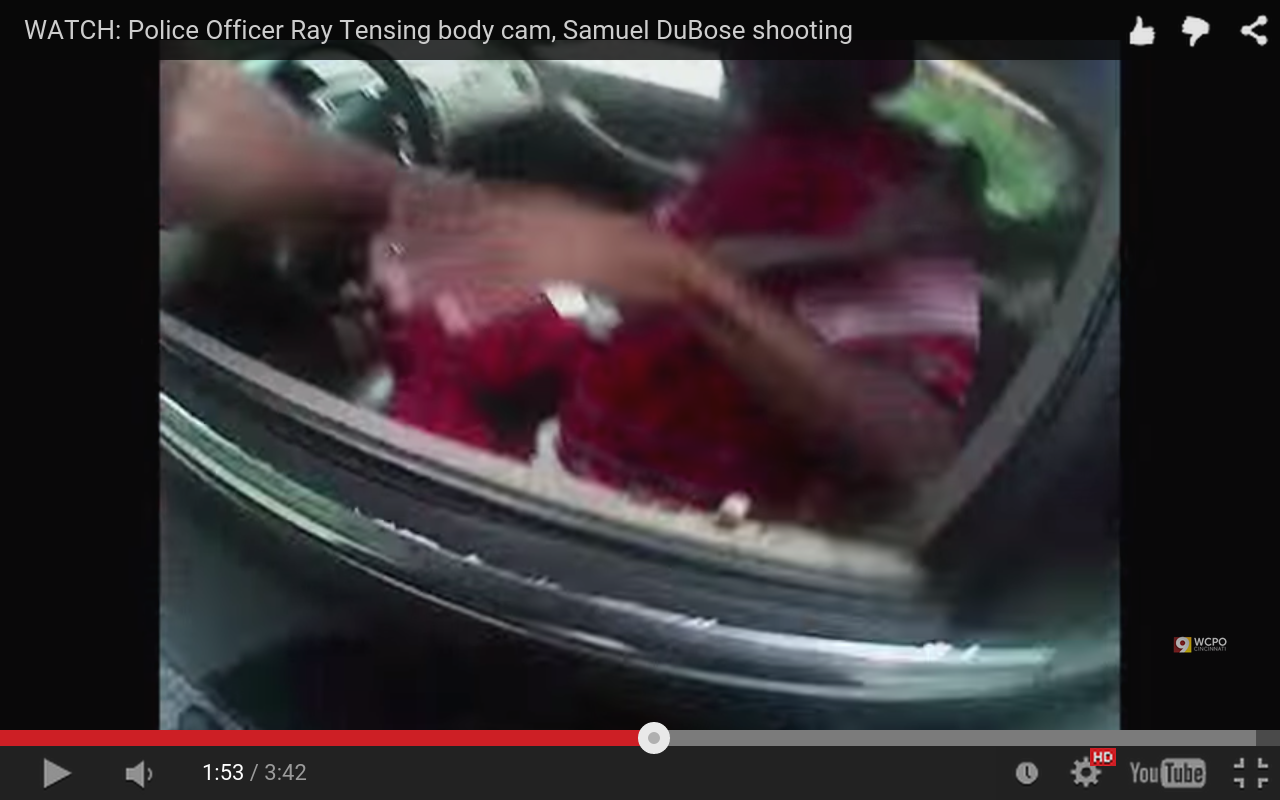 Now at this point
How could the car be moving and the officer hanging' on or being
dragged' by the car , when you can see both of the officers hands now?
he has one hand on Dubrose
and the other on his gun. the officer then shoots Dubrose 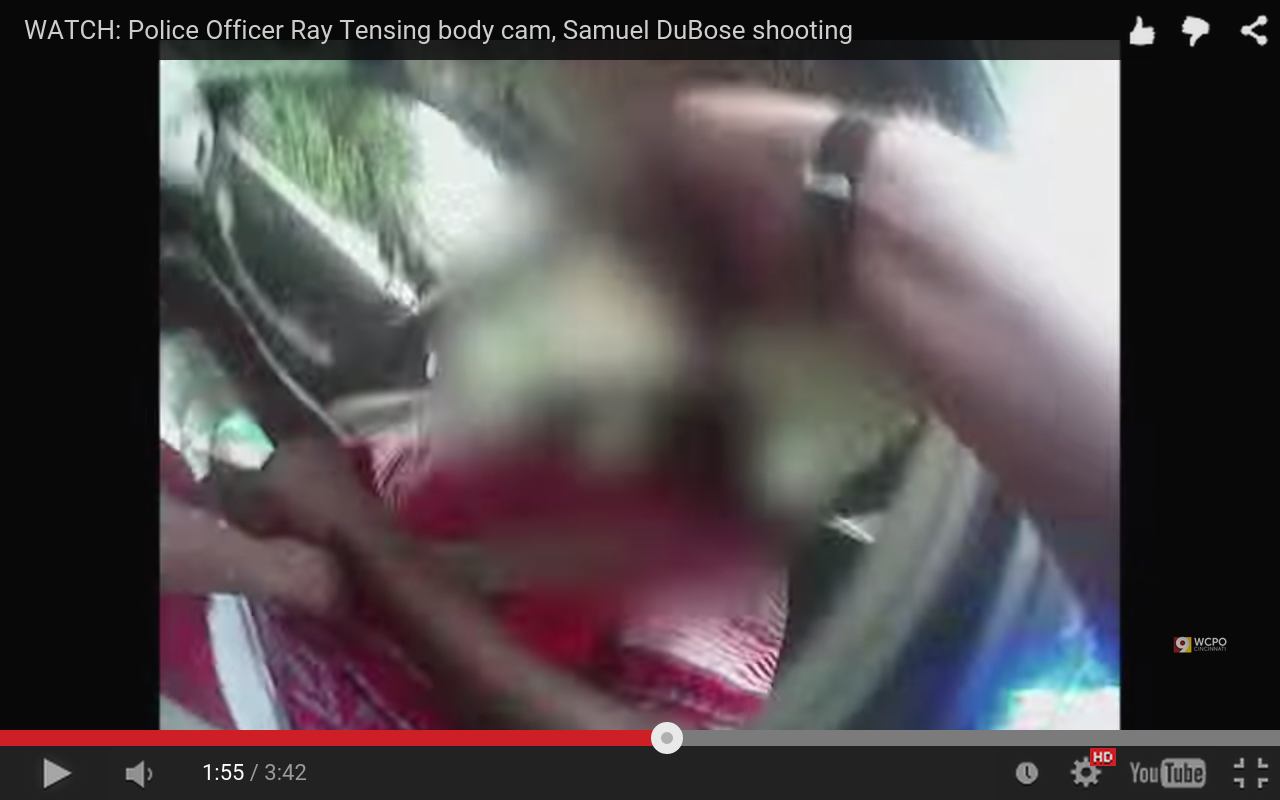 This is when the shot is fired. The cop is not being drug
or caught on anything he's got his hand on the guys chest and gun
in his other hand.

Now with the
gun in right hand you can see it, he starts to fall backwards 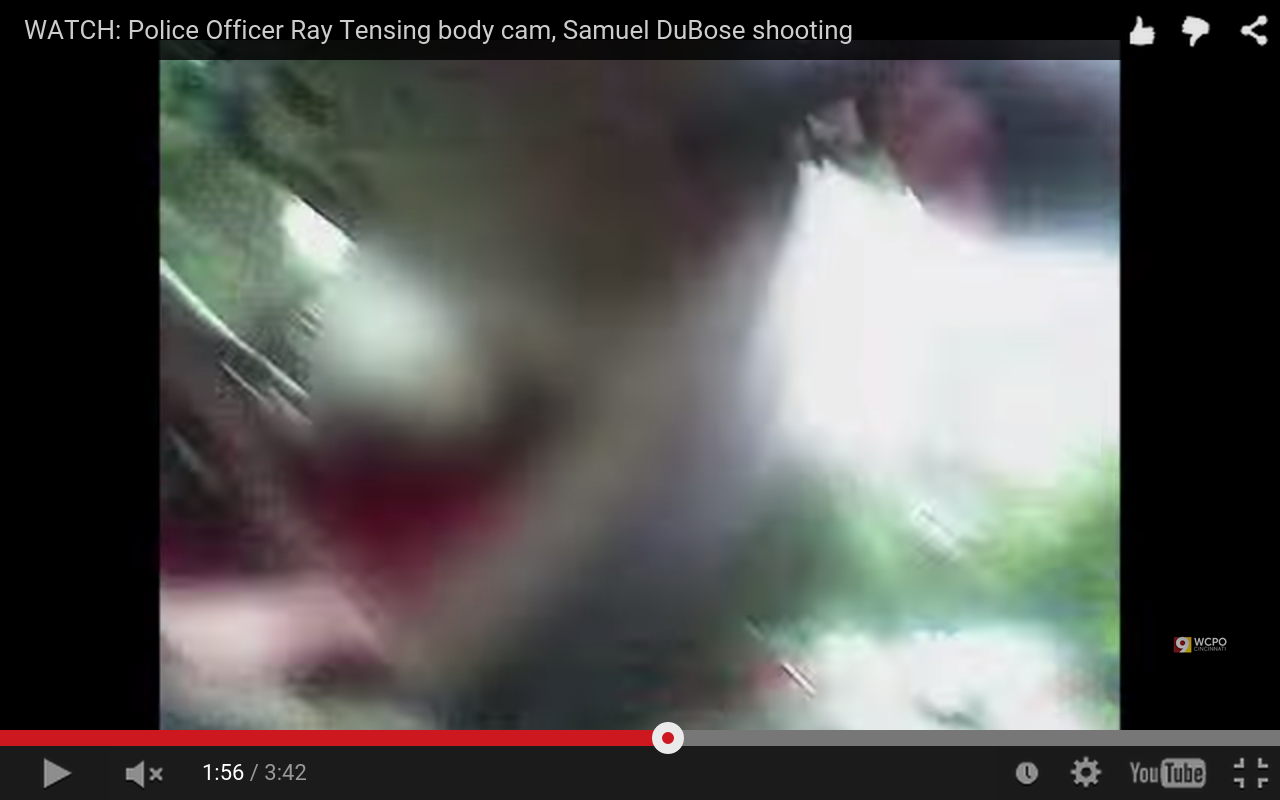 PROVING his hands were never caught up in the car
nor was his body ever
in danger of getting ran over. 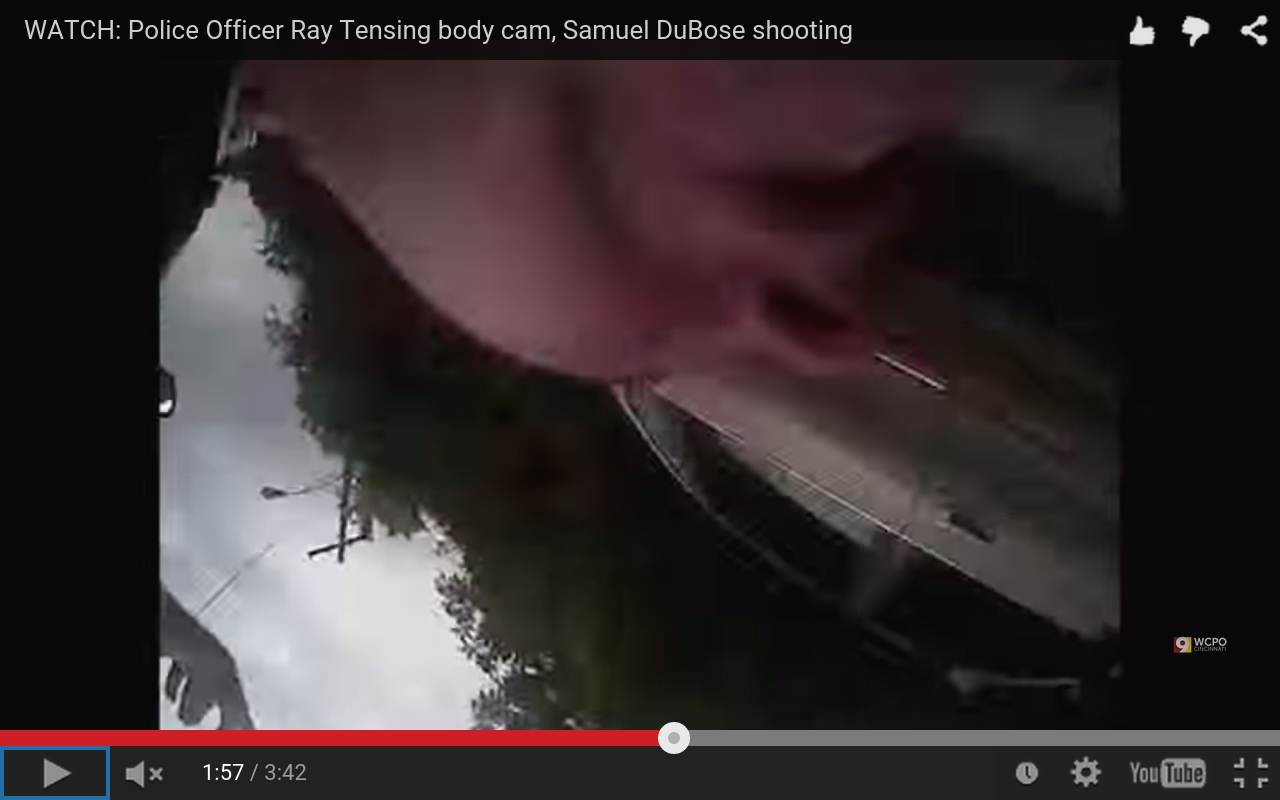 DUbrose goes lead foot on the pedal now that he;s been shot to death
case closed
edit on 31-7-2015 by starfoxxx because: (no reason given)


Look at you all attacking my credibility. Pushing me into a corner, and forcing me to defend my character and knowledge. Then turning around and insulting me for defending myself and my expertise. It's a shame, ATS used to have people with higher standards.

I'm going to call you out on this. You said you had a stabilized video that was FLAWLESS. I gave you the benefit of the doubt because I really do hate body cam videos. Now you're backtracking and making excuses. POST THE DAMN VIDEO. You can tweak it later.


ATS used to have people with higher standards.

Maybe so, but they also had people who would post the evidence they claimed to have

I never contradicted myself.

I have been attacked since I got on this topic. Not by you, but by others.

You cannot possibly be trying to use that as a defense for shooting someone... and you call others dense?

I agree that they should be held to a higher standard.

I don't agree with your idea of it.

posted on Jul, 31 2015 @ 06:12 PM
link
a reply to: Shamrock6
@shamrock I have read a lot of your posts in the PosseC,and when you see wrong you point it out..I might not always agree with you,but you have called it like you've seen it in this thread.Respect to you.

Anyway The goofball fell flat on his ass after firing his weapon.I.e he wasn't "dragged"

As the point of my post was a semantic one, I suppose I can understand how you may not consider it to be a contradiction.
You must, however, understand how going from "flawlessly stabilized" to "not finished yet" might seem to be one for the majority of people, right?

Ya shamrock really does call it how he sees it.

I have to kick my self in the butt too when he does it.
Used, well kinda still do, go at it with him all the time and I would used to assume he would side with the cop no mater what and would never see wrong in their actions.

I was oh so very wrong.

As the point of my post was a semantic one, I suppose I can understand how you may not consider it to be a contradiction.
You must, however, understand how going from "flawlessly stabilized" to "not finished yet" might seem to be one for the majority of people, right?


It's only a contradiction if you ignore the rest of my post that explains the current state of the video, and only focus on the 3 words, "not finished yet". It seems lack of reading comprehension is the root cause of the apparent contradiction at this point.

"Not finished" doesn't necessary mean "doesn't exist", it means its not in a state that I can just upload it and show you all. Its still in raw format only readable / viewable by my editing software, with motion tracks exposed. It must first be rendered into a video file format to be considered completely finished, and then shared. In layman terms, right now only I can see it, you can't.

I also wanted to spend more time on it, and stabilize it with different tracking points. I am doing a fixed object stabilization, not an entire scene stabilization. This means I can pick an object visible in the video, such as the vehicle's steering wheel, and make that the point at which all other frames are aligned. Or I can stabilize the door lock knob, and make that the position that all frames are aligned.

When I stabilize, I usually stabilize multiple fixed points throughout the scene, and splice them together. In my mind, I wasn't finished yet. You all are forcing me to release it before I was ready to.

originally posted by: Sremmos80
How many times did he ask the guy for his name after he said he would ID him self?
Zero.


First off, the suspect admittedly didn't have a physical drivers license on him. Because of that, the officer is supposed to remove the driver from the vehicle. Do you know why? Until it can be proven he is legally allowed to operate a vehicle, he must not be in control of a vehicle. That means he must not be in the driver seat, with keys, and able to drive away. So the officer needs to remove him from control of the vehicle.

Once the driver is removed from the vehicle, he is supposed to be placed in handcuffs for the officers safety. Then and only then should the officer bother to ask his name, and return to his patrol car to look up his name in the system.

That is how it works.

originally posted by: Involutionist
a reply to: Thill

To be clear IMO this in no way justifies shooting the guy in the head but the question is (in my mind) if that gun did not go off by accident.

I feel you. You seem to be a fair minded and commonsense person who strives to examine events for what they are and is not motivated by trying to excuse anybody in this situation. In saying that, I have one question for you:

Why was the gun removed from the holster and in his hand to begin with....?

That's one of those questions isn't it ? It all comes down to personal training and personal decisions based on a case by case basis, at least that is how I understand that. Maybe they train those Cincinnati policeman to have a gun ready during traffic stops and pull it at first sign of truble ? If you watch the recording closely, You will see that he pulls the gun right after the wrestling starts, because just before it You can see his right hand on the hood of the car and its empty. This is something we probably will get the answer for during the trial ? As this would be one of my first questions as the prosecutor for this case.

One thing I do know is that unless that cop is borderline insane, he would never pull a gun with intent to shoot somebody without a way to justify it while wearing a body cam that records everything he does. I mean unless you basically want to go to jail for life, You do not plan to murder somebody with cameras (and witnesses) around You and on You.

That is why to my logic the gun either fired off by accident and he tried to cover it up, or he panicked when the guy was starting to drive off and shoot him while wrestling . Kind of hard to know exactly from that recording. It looks to me after he gets up and starts chasing the car that he does not know that the guy inside is dead. But like I said its all speculation for now based on the limited amount of info and a recording that is somewhat inconclusive during those critical moments.

He does not need to be pulled out of the car just because he doesn't have a physical ID with him.


Where are you getting this info from?

Look mate we have ALL been waiting for your "special stabilized video" for a
while now. I personally do not think you have it & if it is unfinished
why are you even still posting & NOT finishing the so video you keep
speaking about?
You keep coming up with excuses one after another & you keep
putting other members down. That is unacceptable behavior here as we
all try to respect each other whether we agree or not.

At this point and even earlier due to you not producing I cannot even read
any more of your long excuse threads.

So please redeem yourself...show your "stabilized" version because we have all
been waiting very patiently. I really hope you can come clean & enjoy the rest
of your weekend.

And so now I can't read? Okie dokie then. I assume your complaint of being the one attacked was extreme irony...
Anyway, as they say, pics or it didn't happen.
In fact no, forget it, go on being you and good luck with that.

posted on Jul, 31 2015 @ 08:49 PM
link
Must be a very long ride home. It's been 2 hours since your last post and no video. Just another poster blowing smoke out of their ass trying to look soooo important and special. What pisses me off the most is, I thought, " No way can someone be this condescending and childish without something to back it up"

To be fair we don't know where he is.

If he says there is work on the video to be done then lets give him the benefit of the doubt and assume there is.

My money is on no video but I would love to be proven wrong. 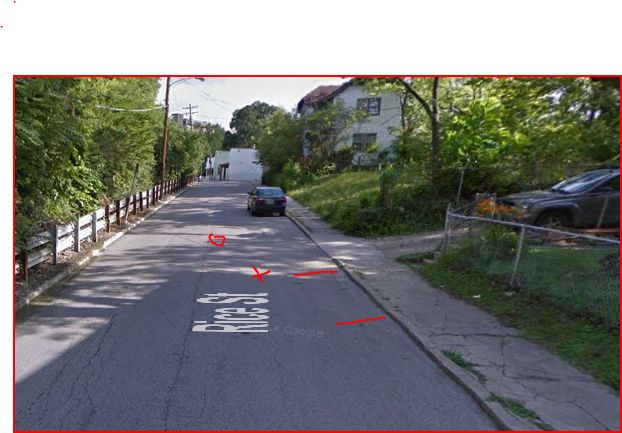 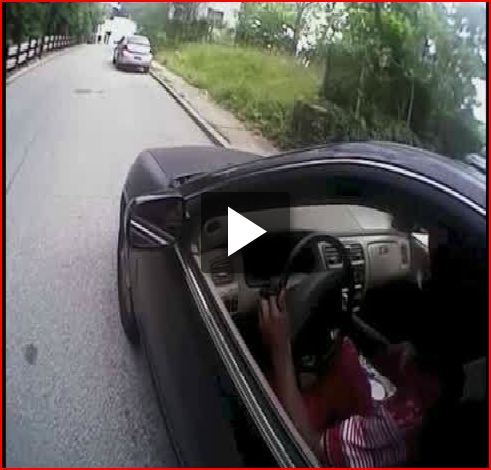 I've watched the video a few times, and my impression is that the officer shoots from like 4 o'clock, and is blown backwards, towards the manhole, rather than having been dragged. The video clearly belies his having been dragged, in my opinion.

Ah, but he said a FLAWLESS stabilized video, he is just a perfectionist. I'm not. Since he was so convinced with the imperfect video, I think it is good enough for us