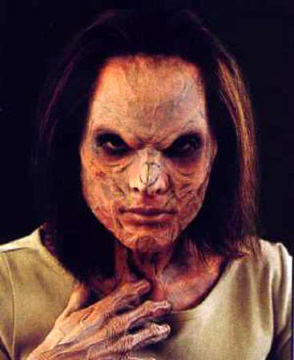 I've seen it once... I was looking at a picture of a stunning beautiful girl, when suddenly I could see both the beautiful girl as well as the demon in disguise.. The features that made her beautiful or demonesque were the same.
It looked much like the vampires in buffy the vampire slayer... But then more realistic, their face appeared to be melted and then perfectly reconstructed while still keeping the molten appearance.

I understand if you have never experienced this before you will think of me as some sort of lunatic. It is okay, I understand, I would feel the same way.
But for a brief moment, it felt as if I looked through the veil.

Only women is it?.
No such thing as demons just the frailty of the human condition.
Stop making excuses for our failures.

What failures?
I'm just calling them demons because it is something everyone understands, it could be anything.

Its true what they some of the most beautiful people have the worst attitudes.