The FORCE of Trauma

posted on Jul, 29 2015 @ 09:59 PM
link
When we consider war, we pay attention only (or mostly) to the practicalities of conducting a war, possible political consequences in terms of it's effects on other regional actors (as well as their allies), monetary considerations, and perhaps ethnic rivalries (or not). But the most obvious and salient reality - the experiential one - is invariably overlooked by the political actors who determine where the world goes.

The social reality of our collective thought patterns - something we call 'convention' - determines why we think this way, and we think this way, as Michael Tomasello persuasively argues, because we evolved our cognitive faculties from repeated, emotionally charged interactions with other members of our species. Tomasello brilliantly points out that our minds are not designed to discover "truth", but to convince one another of our reason for acting a certain way. This distinction is essential: we are not the "rational actors" that political and economic minds have tend to think; the work of cognitive science, in particular, the work of Daniel Kahneman, has crushed this notion of a pure 'rationality'.

This emphasis on our vulnerability to delude ourselves is a natural consequence of evolutionary rationale: the dynamics that control the simplest cells - maintaining life - ALSO operate in us. Cells accomplish this homeostatic feat in human minds, according to the neuroscientist Antonio Damasio (amongst others) by biasing our attentional processes to think IN AGREEMENT with what we FEEL. Feelings, according to Damasio, are "somatic markers" that drive the thinking to mind to think LIKE THIS - and not like that. A simple example would be a cut on your finger. The pain from the cut signals a negative response in emotional state, leading to thoughts like "damn, ow, crap". Our thoughts, seen in this light, are like leafs that flow along the emotional logic of feeling states. To 'step' outside the flow of feelings and to THINK ABOUT THEM, although possible, depends upon culture for it's development.

The human mind is BIASED to conform thought, feeling and behavior with the collective because this is how we have managed to survive. These feelings arise as a menage of social and biological influences - the social "treating" the biological, creating different synaptic connections, myelin densities, and gene products - that produce states of mind that are "compelling" to the experiencing subject, impossible to deny, since, why would one be compelled to deny the PROCESS that is ones own consciousness and sense of identity? Skepticism about the nature of mental experience is a cultural achievement (such as with Buddhism); it does not develop on it's own.

Humans are interesting creatures who live, like the cherry on top a cake, above the realer phenomenon: biological adaptions that enhance survivability. For us humans, an example of this phenomena is being spoken to by another person (or group of persons) with aggression, disrespect, meanness, or condescension, and finding oneself compelled to respond with a corresponding aversion: anger, distress, or your own meanness. These thoughts flow through the visceral logic of feeling states, but the states themselves - the feelings which determine the "meaning content" of our cognitions (inevitably with words) - are the determinant property.

So back to war. When we go to war, we pretty much ignore the psychological repercussions of being exposed loud noises - the sounds of war. There is also the sights of war: bleeding, crying faces, loud screams, sounds of emotional torment. The sight of destroyed buildings, poverty, and common conversation about the evils of the attacker. There is also the economic consequences and the stresses they educe. Irritation, irritability, isolation, anxiety, are easily borne from stultifying economic conditions, conditions prone to aggravate thoughts of a hopeless future, and a meaningless present.

How will conversations be conducted, how will the emasculated male of a traditionally patriarchal culture experience the indignity of being invaded by a foreigner? The thoughts that come with war (I'm thinking of the Iraq war) have everything to do with the culture of the society experiencing it. More often than not, human beings do not respond compliantly to an "invader" - culture itself, over time defaults human thinking toward "us" against "them", so naturally a US intervention would aggravate rather than promote democracy. But deeper still, how have relationships fared in a post-war culture? How do people think and feel? When you analyze these things individually, or socially, what you find is the same thing: an inclination towards defensiveness, or, stated differently, an adaptive attitude that maintains a positive self-experience amidst conditions that cause pain.

A traumatized individuals personality becomes built around the fear of re-experiencing trauma - thus, it becomes chronically avoidant of the 'objects' that remind the sufferer of the trauma; these objects are not merely external (i.e. people, places, things) but also internal, as feelings and thoughts that remind the sufferer of those feelings. Anger, as we well know, is generated by feelings of "having been done wrong"; but it is also oftentimes elicited by feelings of shame and weakness - traits that cast one as socially 'inferior' - which for the socially evolved consciousness of human brains is tagged as painful - as well as "hateful".

Knowing what we do about the effect of social experience on human brain function should force political leaders to consider the long term consequences of adopting a rhetoric of war. You commit yourself not only to the immediate physical effect of war, but also the long-term psychobiological consequences that accompany war. The culture itself - formed and constructed from the mutual, simultaneous activity of individual minds - in concert with strong, emotional experiences, eventually serves as a 'baseline' for following generations (who did not experience the trauma) to imbibe some of it's effects through socialization in the culture.

These effects, to sum it up, are immense. When I hear talk of war with Iran - mostly from the mouth of Republicans, I shudder with fear. Far away from their awareness lies the world of science, where a person like myself stands in awe of what mankind has discovered about themselves: how social experiences (a genuine smile, compassion, or hatred) become 'encoded' as protein products, through processes like methylation and acetylation.

To know what we now know beckons us to respond maturely, consciously, and to embrace with grace the new reality that how we act influences how we perceive. We are embedded in a web of interactions that marks each of us as vulnerable, as well as dependent on others for are healthy - and meaningful - development.

There is no greater violence than the violence of war - that is, the power of violent action on the way the human mind functions. Violence changes reality - never leaves it the way it was before, because it affects the brain through the power of emotional experiences. The resultant paranoia is merely logical: the brain is primed for violence now.

We must realize that how we FEEL about our world has everything to do with how we act. Violence begets violence, everyone knows. But what about 'a sense of threat begets a sense of threat'?

posted on Jul, 29 2015 @ 11:40 PM
link
a reply to: Astrocyte
Such a brilliant exposition, thanks for taking the time to put in to words such a large subject in such a convincing way. As the song sings " War, boom boom, what is it good for? Absolutly nothing, say it again! Let us not forget and at the same time let us not be cowards.
In rememberance of this war in Poland. 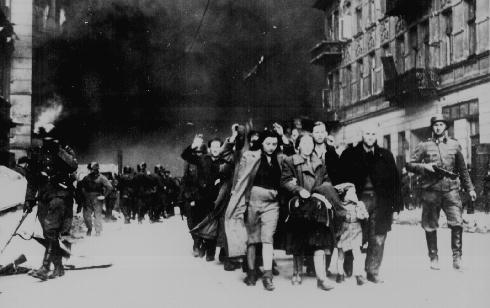 Thank you for a great Thread. Its sad that the consequences and trauma of War are not viscerally felt by the warmongers. Or that they would put their own children in leading the battalions.

That is why they created the perpetual war on Terror. Orwellian at its finest.
edit on 31-7-2015 by TheConstruKctionofLight because: edit

posted on Aug, 1 2015 @ 12:33 AM
link
Hopefully, the next few generations of people will start and continue their life staring at a computer screen, having all nutrional needs automatically administered through IV, without ever having to move their physical body. That way, the cells will remain untouched, the mind completely free from the limitations and influences of trauma in the body.