Minister Tony Evans was talking about the black community and how they need to get back to “the biblical standard that God holds us to,” and to stop blaming white people for their problems. The man is entitled to his opinion, and so is Sarah. But my question is What Is She THINKING? Or is she thinking at all?

“When slavery was first abolished, to say that that was a radical change would be an understatement,” Palin said. “In fact, it’s a historical one. So, today, when everything everybody seems to be talking about are illegal immigrants and their status, maybe it’s time to make another equally radical – no, scratch that – historical change that would bring the attention of the public back to the real problem – the black community in the US.”

Asked to further elaborate, Palin openly said: “What I’m talking about is realizing the pastor’s idea somewhat indirectly – bringing back slavery, only this time making it voluntary. That way, the people would be able to have the best of both worlds. On one hand, black families would become as strong as before, and on the other, it would reduce pressure on the already tense relationship between white people and the black community, not to mention that it would put down the racial fires all across the US once and for all.”

Really, Sarah? REALLY? Notice that the discussion had NOTHING WHATSOEVER to do with the National Debt, which is now, what she says she was referring to... She claims that her use of the word "slavery" was misinterpreted.

According to Webster’s Dictionary, slavery as a noun means, “the state of being a slave :the practice of owning slaves.” There is no meaning of slavery as Palin described it in the interview. All the definitions of slavery are related to owning other human beings as property.

Sarah Palin seems absolutely unaware of the fact that a white person telling African-Americans that they misinterpreted the term slavery reeks of both white privilege and racism.

I would have sworn it was the Onion. Nope. Positioning for the Trump VP slot.

And...I'm sure they will be wondering why it took someone so long to think of it.

You need to find a better source for your quote than the rag you listed.
No fan of Palin, but I don't know of her being that over the top.

originally posted by: Metallicus
This entire OP is FALSE.

Whywhywhywhy did you SAY anything!

To watch the Palin haters is a riot!

Sarah Palin is too easy a target of quotes and sayings that only sound believable because she can be a loose cannon.


Even she isn't that loose.

posted on Jul, 29 2015 @ 06:03 PM
link
It is from Newslo. Hence it is pretty obviously a satire article. And besides, you can just click on the source link and find out for yourself that it's not real.

posted on Jul, 29 2015 @ 06:06 PM
link
Might not want to use Buttbet for a news source.
Seems they like mix facts and fantasy to make your reading time more fun. 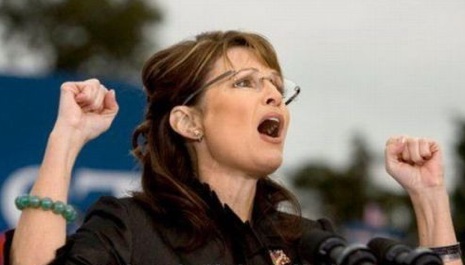 Is this a shot of her "practicing" for her new position?

edit on 29-7-2015 by FinalCountdown because: totally suck at spelling

Hilary is an actual criminal, but lets spend time hacking on Sarah because she looks funny. Excellent commentary SMH.

Oh come one now. Surely there is plenty of time for hacking on both sHillary Clinton and Palin. One for being an evil hag and the other for being an annoying nag.

The Kruger-Dunning effect in full force.


The video in that story "does not exist".