There seems to be many different styles of Bernie Sanders presidential campaigns bumper stickers.

The gun show loophole is where you can just go to a gun show and buy a gun.

It is considered a private sale so I think it doesn't need the background checks.

That is a massive loophole.

Seen it first had, we were in Texas for some training and all the guys had to do was show their orders and their ID's and they were able to all buy pistols.
Think one of our SNCOs bought a M4 as well.

He did offer a solution, he wants more background checks and the rules on who doesn't get a gun enforced.
I think I know the video you are talking about.

I like Feel the Bern, Bern Baby, Bern, and I Supported Bernie Before It was Cool. Also like...Bernie Sanders...Not for Sale.

posted on Jul, 29 2015 @ 04:25 PM
link
I like Bernie and what he talks about but his primary dinars are all Union lobbyist and in pretty sure that has a lot to do with it.

Is it genuine or two sides of the same coin?

posted on Jul, 29 2015 @ 04:37 PM
link
a reply to: Sremmos80
I will admit my husband and I enjoy having our firearms and honestly, we were both shocked when purchasing our Bushmaster semi automatic rifle and a 9 mm plus ammunition, we just had to walk around the store for under a hour and wahlah, take them home! It was crazy, and unbelievable! Admittedly, a wee bit scary too! I respect gun rights, but seriously I have to agree that there is no reason one should not wait 24 to 72 hours before impulsively buying a gun! True, not everyone runs out and kills someone, most are like us and get excited and impulse buy, lol. Honestly, I think the gun stores realize that impulse buyers having time to think will not even buy it! It is all about money not freedom in the end. Bernie did try to get a 72 hour background check passed in the senate, I say it is not a bad thing. Even including training! Hell, you would think gun clubs would love the extra income in certifying more members! At this point, I say go Bernie for 2016!


Bernie Sanders on the Issues

I think a Democrat that was not endorsed by the union would be something to question, don't you???

None of Hillary's top donors are unions. All of Bernie's are

This is significant and telling. If you believe in following the money, the money route here leads to the conclusion that worker supported unions believe that Hillary is not on their side and Bernie is.

While Hillary Clinton has made a political career with the support of the financial sector, socialist Sen. Bernie Sanders (I., Vt.) has relied on labor. A review of campaign fundraising records conducted by the Labor Union Report found that all of Bernie Sanders’ top donors come from Big Labor, which could complicate Hillary Clinton’s tack to the left to woo union support. 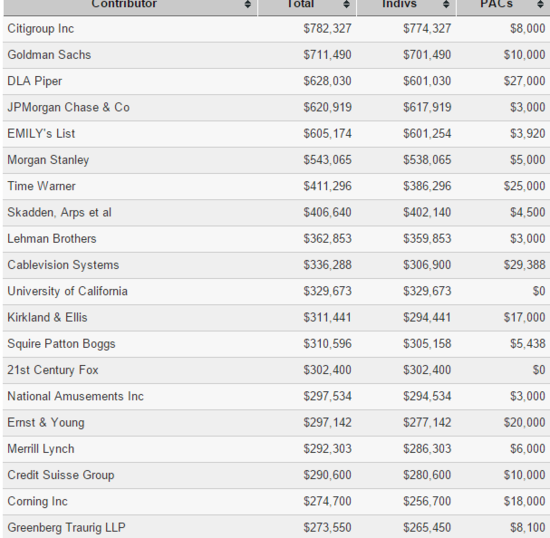 I was referring to an article I read a few days ago maybe on Yahoo or some similar site. Bernie was saying that he has voted to ban certain types of "assault weapons",

how he voted to close a "gunshow loophole"

which to my knowledge never existed,


Gun show loophole is a U.S. political term referring to the sales of firearms to private buyers by private sellers including gun shows. Unlicensed private-party sellers are not required to ask for identification, and cannot initiate a background check without the help of a Federal Firearms Licensee in all but three states, where they may do so voluntarily.[1]

The seller is also not required to record the sale. The loophole refers to a perceived gap in the law with regard to sales or transfers of firearms between private citizens.[2]

and a he wanted background checks to be "stronger, more enforceable."


Like - not letting mentally deranged people own guns? Like, not allowing felons to buy at gunshows because there's no background check (which doesn't address the issue of individuals selling to other individuals)

The language he uses says to me that he has no idea what he's talking about.

He went on to say "we need to find a common ground solution" (maybe not exact wording) but never offered what that solution may be.

Yes for those that let the NRA do their voting for him, he will lose votes.

His record is a little different.

Unless you pay attention to what he's actually saying...

"I believe that we need to make sure that certain types of guns used to kill people, exclusively, not for hunting, they should not be sold in the United States of America, and we have a huge loophole now with gun shows that should be eliminated.”

So guns are only for hunting... and he's using the "gun show loophole" nonsense straight from the anti-gunner's playbook.

I've gotten several firearms at a gun show and had a background check every single time. Up until I got my permit which is backed by a more extensive background check and covers me for 5 years.

Sanders will be like Ron Paul, the establishment status quo in his party will do everything in their power to defeat him. If he were to win, mainstream Dems would probably not like his Administration, just like Ron Paul.

originally posted by: CynConcepts
we just had to walk around the store for under a hour and wahlah, take them home! It was crazy, and unbelievable! Admittedly, a wee bit scary too! I respect gun rights, but seriously I have to agree that there is no reason one should not wait 24 to 72 hours before impulsively buying a gun!

No, you didn't just "walk around the store for under a hour and take them home."

You or your husband filled out a legal document stating that you're not legally prohibited from purchasing a firearm and the store called into the FBI to check your background.

Just because YOU don't realize what's going on when you buy a gun doesn't mean they aren't checking your background.

No reason someone shouldn't wait to buy a gun? What about the fact that there isn't a waiting period for any other purchase? How about a woman who fears for her life from an abusive stalker/ex boyfriend/etc.?

Waiting periods had no effect on crime which is why they were done away with. It blows my mind that the antigun groups want to bring back the old ineffective laws that they've already attempted.

posted on Jul, 29 2015 @ 05:21 PM
link
a reply to: pavil
I wondered about this but wouldnt they rather have Clinton at least in as VP rather than risk the republicans or worse, Trump waltzing into the whitehouse? Hmmmm?

The gun show loophole is where you can just go to a gun show and buy a gun.

It is considered a private sale so I think it doesn't need the background checks.

Wrong. That's what the anti gun crowd wants you to believe.

Sellers at gun shows are almost always licensed dealers and they have to do paperwork and background check just like selling in their store.

The private sellers are folks walking around the show looking to sell their own firearm. They could do the same thing online, in the newspaper classifieds, or in the parking lot outside the show.

That is a massive loophole.

No it isn't because you can buy from a private seller without going to a gun show.

Seen it first had, we were in Texas for some training and all the guys had to do was show their orders and their ID's and they were able to all buy pistols.
Think one of our SNCOs bought a M4 as well.

Uh yeah, if they did that at a gun show, they probably bought from a dealer and had to fill out paperwork and had the background check. They didn't just pay for it and walk.

ANY GUN bought from a DEALER requires paperwork and background check. Period.

Well they bought it and had it the same day.

Are checks that fast?

Because he discusses REAL issues.

Because people are sick of the FAKES and their FAKE promises and FAKE concern and their transparent pandering.

I say he has a really good shot at it.

Do you honestly believe that he is going to do anything that will make a difference?

He is just like everyone of the other career politicians that make Capitol Hill their bread and butter.

Sorry. He is not going to save us.

originally posted by: Sremmos80
a reply to: Answer

Well they bought it and had it the same day.

Are checks that fast?

It was created specifically for firearm background checks and it will give the dealer a denial if someone has a prior felony, domestic violence conviction, or any other disqualifying conviction. It will also give a "delay" if something is odd and they need to do more checking.
edit on 7/29/2015 by Answer because: (no reason given)