Astral projection and the Great Pyramid

posted on Jul, 28 2015 @ 08:41 AM
link
There are other less considered astral alignments or projections of the Great Pyramid that can be considered other than the star shafts themselves, but taking those as evidence of interest in such activities we can deduce further possible projections such as the angle of the ascending shaft. 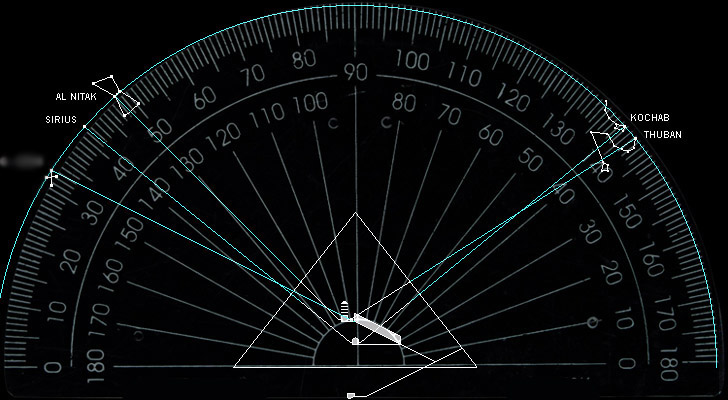 This projects upwards at 26 degrees which would correspond to the altitude of Gamma Crux due South at that period, but because the basis of the projection is offset it could also be taken as projecting toward 33.5 degrees in terms of relative positioning, but in doing so that projects toward Y-Centaurus which is in vertical alignementwith Gamma Crux anyway, which is to say G-Crux is at 26 degrees elevation and Y-Centaurus at 33.5 degrees. 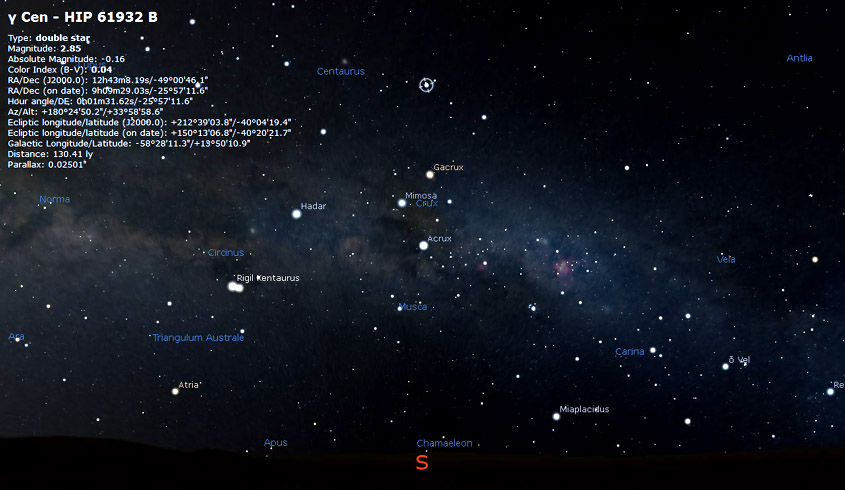 It interested me then to consider at what angles of elevation and stars due South the Queen and Kings chambers themselves could be projecting towards, the Queens chamber will project towards an angle of elevation at around 4.5 degrees, and the star that achieved such elevation was Canopus, and given seeming interest elsewhere in ancient Egypt in alignment toward Canopus it seems very likely they would have been aware of this. 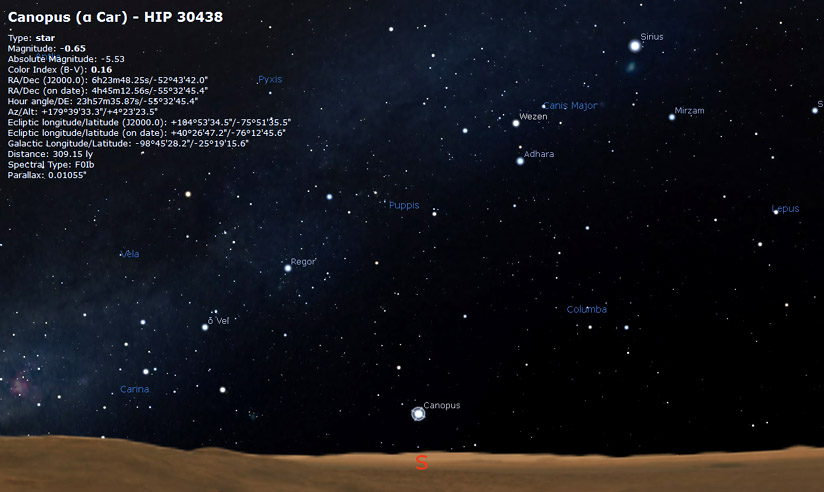 The Kings chamber entrance way projects outward toward an angle of elevation of around 7.5 degrees due South, the best candidate for this projection is the somewhat obscure Alpha Pavonis or Peacock star;

The constellation's brightest member, Alpha Pavonis, is also known as Peacock and appears as a 1.91-magnitude blue-white star, but is actually a spectroscopic binary. Delta Pavonis is a nearby Sun-like star some 19.9 light years distant. Six of the star systems in Pavo have been found to host planets, including HD 181433 with a super-earth, and HD 172555 with evidence of a major interplanetary collision in the past few thousand years. 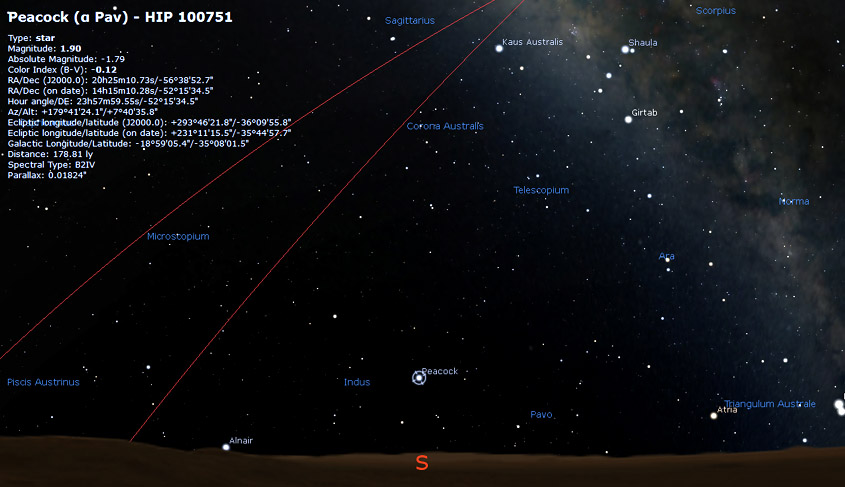 So there we are then, a few thoughts, interest in the y-centaurus/G-Crux alignment of the Southern cross due South achieved through the relative positioning and angle of the Grand gallery seems a very likely feature of intent as does the maximum elevation of Canopus in connection to the height of the Queens chamber, Alpha Pavonis maybe a bit of an odd choice.

Are the calculations based on the pyramid dimensions and views 4000 years ago or to be more specific, when they were in use by their builders?

Of course my astral projections are based on Cairo 4,500 years ago and yes they were very much in the consideration of the builders, to simplify if you'd looked at eye level along the entrance way into the Queens Chamber during construction the star you would see due South with corresponding elevation to your viewpoint would have been Canopus at a certain point during the night, by the time you have arrived at the level of the Kings chamber and done the same it would have been Alpha Pavonis, doing this at the very summit you would see Gamma Crux at 26 degrees elevation, the desired height of your ladder as it were.

Of course if you'd wished to achieve this for Sirius and the Belt of Orion your pyramid would have needed to be much greater and higher, so star shafts sufficed in terms of projection. 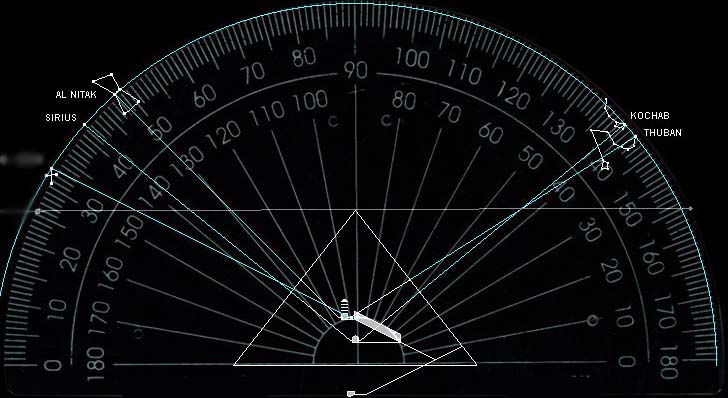 Fascinating. It would be great to have a time machine and go back and see for sure what they were for.

Why is it that every theory on the Great Pyramid as a star chart never incorporates
the other enigmas of the Great Pyramid such as the Five Step Niche in the Queen's Chamber..
...or the Grand Gallery..or the Subterranean Chamber???

There is a video on Youtube that explains the interior of the Great Pyramid and it
explains ALL the interior functions showing the interior to be a replication of our Solar System..
..an exact replication that shows our solar system in an alignment.

For what it's worth - it shows the AE could not have built the Great Pyramid
for as we know, they couldn't have known about these astrological equations.

To a considerable extent this does take into account the Grand Gallery projection at 26 degrees, which as i've pointed out in terms of corresponding astral elevations would correspond to Gamma Crux, but given the relative position the gallery projects from it actually projects to the star above in Y-Centaurus at 33.5 degrees elevation which would be in vertical alignment with G-Crux due South.

The subterranean passage also descends at 26 degrees but again from where it projects in terms of relative position that is towards 20 degrees elevation due North, it is as though they saw things in terms of building a sort of ladder into the Heavens, that the greater height achieved corresponded to a star of greater elevation, that the levels of the pyramid corresponded to levels of the Heavens.

posted on Jul, 28 2015 @ 10:53 AM
link
So what would be the symbolic significance of those alignments in mythological terms that the ancient Egyptians would have understood?


Do you have any valid reasons for rejecting the theory that what we call "the Queen's Chamber" is actually a chamber built for statuary (the niche being the location for a statue of the dead king) and assorted necessities thought to be needed in the afterlife?

That's what's been seen in several other tombs.

There would be many complex mythological associations with the various stars and constellations, but looking at the seeming importance of 26 degrees or the sehked equivalent and that corresponding to the elevation of Gamma Crux due South which was realized in the height of the pyramid; 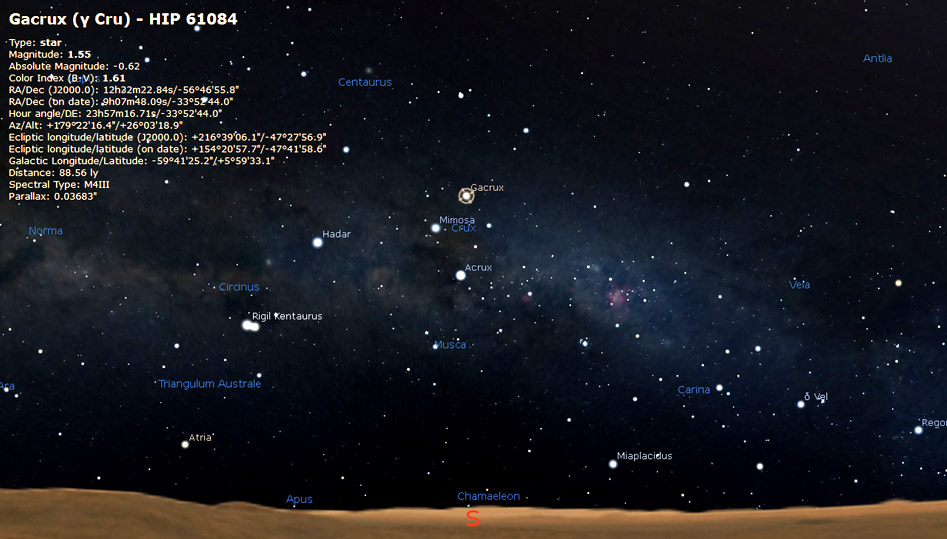 Then in terms of the form of Crux one might begin to see an interest in the basis for the iconography of Osiris. 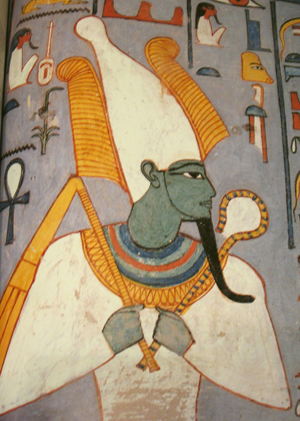 Other than to track the seasons
with precision for planting and
flood cycles of the Nile, etc. what
is your theory as to why so many
ancient peoples were obsessed
with astronomy?

originally posted by: AquarianTrumpet
For what it's worth - it shows the AE could not have built the Great Pyramid
for as we know, they couldn't have known about these astrological equations.

Alternatively, what you're talking about is made up nonsense which would only fool someone with an already misperceived agenda and who knows hardly anything about ancient Egypt.


Kantzveldt , you should probably read this
en.wikipedia.org...

Then in terms of the form of Crux one might begin to see an interest in the basis for the iconography of Osiris.

Osiris wasn't prominent in this context until the end of the fifth dynasty, the Great pyramid was built at the start of the fourth
edit on 28-7-2015 by Marduk because: (no reason given)

No easy answer really, that the Pharoah wished to take his place among his ancestors the stars is something of a given in Egyptology and so building a pyramid that ascended into the Heavens as it were a seemingly practical way of going about things, ever looking to the greater beyond i suppose for the Egyptians, but i don't think that a complete answer as the Sumerians associated certain constellations with the origins of life in terms of their association with Enki and his star Fomalhaut and the extension of an axis across the Heavens.

No easy answer really, that the Pharoah wished to take his place among his ancestors the stars is something of a given in Egyptology and so building a pyramid that ascended into the Heavens as it were a seemingly practical way of going about things, ever looking to the greater beyond i suppose for the Egyptians, but i don't think that a complete answer as the Sumerians associated certain constellations with the origins of life in terms of their association with Enki and his star Fomalhaut and the extension of an axis across the Heavens.

I've always hated that answer. As an adult I know I can't build my way to the heavens and as child I understood that also, if not initially at least having read Yurtle the Turtle. To invest such treasure into these structures one would assume some practical use existed if even just a power structure, place of worship or some serious pride issues.

My old mentor quoted the last high
priest at Luxor I believe, who said that
no God had ever come to the Earth.
Inferring that the stars were considered
to BE the gods.

I don't really need to read that because the Pharoah's did intend astral projection into the Heavens though i also employed the term in the sense of directional projection toward astral bodies, works both ways.

The thing with Osiris is that during the Fifth Dynasty as you indicate he hoovered up a lot of lesser Deities which had previously specific functions, thus many of the components of the Osiris assemblage were actually made earlier, in the case of this iconography probably Andjety.


The heqa sceptre (or shepherd's crook) was closely associated with the king and was even used to write the word "ruler" and "rule" in hieroglyphics. It was essentially a long stick with a hooked handle and in later times it was often composed of alternating bands of blue and gold. This sceptre became one of the most famous emblems of kingship. One of the earliest examples was found in a tomb at Abydos (U-547) dated to the Naqada II period of pre-dynastic Egypt. This heqa sceptre was composed of limestone but was in fragments. Another early example (this time complete) made from ivory was found in the largest predynastic tomb in the Abydos cemetery (U-j).

It is thought that the heqa was originally associated with the god Andjety, who was himself considered to be a ruler. When Osiris absorbed Andjety, he also adopted the heqa as one of his emblems.

Andjety is thought to have been a precursor of Osiris. Like Osiris he is depicted holding the crook and flail and has a crown similar to Osiris's Atef crown. King Sneferu of the 4th dynasty, builder of the first true pyramid, is shown wearing the crown of Andjety. In the Pyramid texts the king's power is associated with Andjety.

Someday some other species will
discover the ruins of our civilization
and will infer religious theories about
our football stadiums. Of course
they would be right in a sense.

Someday some other species will
discover the ruins of our civilization
and will infer religious theories about
our football stadiums. Of course
they would be right in a sense.

Especially when they unearth Sanford Stadium in Athens, Georgia.

The practical function was that of the ladder or stair.


In terms of cultural significance, the Crux, like all constellations, played an important role in the belief system of many cultures. In the ancient mountaintop village of Machu Picchu, a stone engraving exists which depicts the constellation. In addition, in Quechua (the language of the Incas) Crux is known as “Chakana”, which literally means “stair”, and holds deep symbolic value in Incan mysticism (the cross represented the three tiers of the world: the underworld, world of the living, and the heavens).