Is this photo real or fake...how can you tell?

posted on Jul, 28 2015 @ 02:14 AM
link
Hey ATS, I don't often post, though I've been visiting for nearly a decade. When I do it is many times to look to the diverse ATS community for their open, yet critical minds. Anyway, yesterday at band practice the guitarist/vocalist, a friend of mine, gave me a couple photographs that he had mentioned last week. He had gotten them from his fiance, who got them from a coworker. She works with a small number of other staff, so it is someone she knows fairly well. The coworker said that her daughter had lost her cat, and upon finding it, had taken a picture. He also mentioned something about them having several mysterious housefires and the picture was taken near where an old home had burned down.

The following is supposedly a zoomed in version of the original, as well as a zoomed in version of that. I say supposedly because the final image doesn't appear degraded enough to have been zoomed in that much. He is trying to get the original he says, but he is pretty superstitious and was scared to even give me the ones I have. My girlfriend (who is far less skeptical than me usually) and I are nearly convinced that it is a fake of some sort, whether intentional by the coworker or not. The quality is too good to be true, the angle of the photo seems nonsensical, and it looks like some generic Horror character. I initially thought it was staged with a live-action person in the background, but it seems like the timing to get it so the tail wasn't in the way would be a bit difficult. I also thought that maybe the lighting and shading, especially in the hair, would be too difficult to produce with photoshop. However, my girlfriend convinced me otherwise and really digital fakery seems most likely. Maybe it is a real anomaly,some kind of apparition or what have you, and maybe there is something we are missing...maybe it's a photo ripped from the net and cloned in seemlessly.

I thought I would turn to all of you and see if maybe there are some photo-analysis folks or really anyone who can elucidate on the authenticity of this photo. What do you think ATS; is it real, fake, and how do you defend that position? 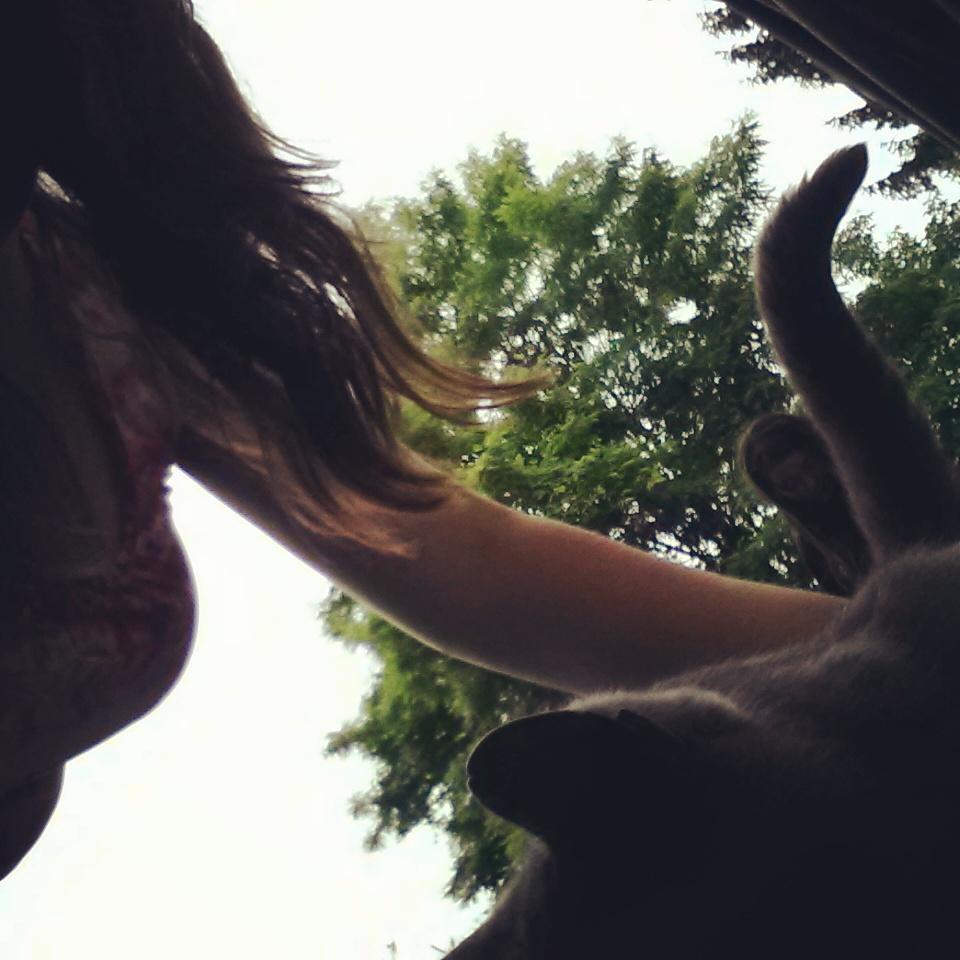 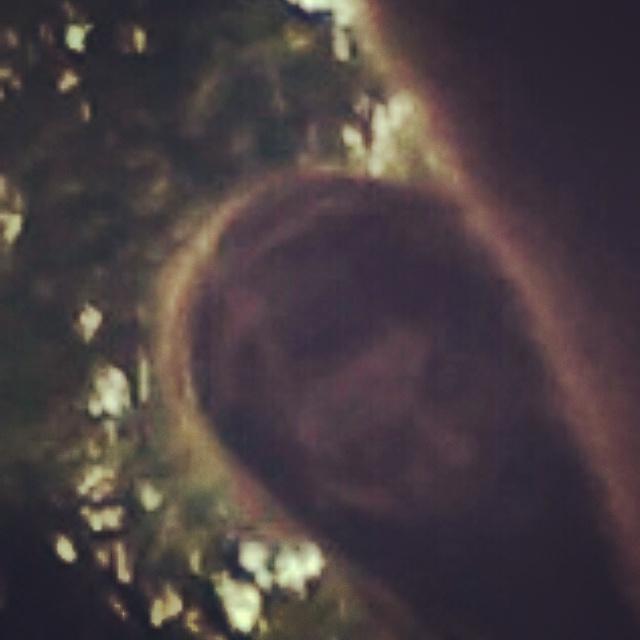 Can't do much without the original, with EXIF data included.

posted on Jul, 28 2015 @ 02:44 AM
link
Thanks for the responses! I will look into EXIF data and see if I can get the original. LionOfGod I was thinking the same thing, as that would alleviate the timing issue.

I can tell you one thing, it is not photoshopped or an implanted image. Staged, aybe, idk, but not a fake from what I can tell through the algorithims I put it through. That is, without the original file or image.
edit on 28-7-2015 by iDope because: (no reason given)

Saying there was nobody else present is enough to sell the story, I guess.

I dont think the boob is fake.

I dont think the boob is fake.

Naw, it's pretty convincing. But the original would be appreciated.


Zoomed using what software? It hates pictures because it removed all the metadata. (You can put things through photoshop, then in paint, then back out, then into a third party app and it will still retain something usuaaaaaaally)

He is trying to get the original he says


Taken by what camera?

Queries:
* Why you?
* Why is the original hard to get when it's probably digital anyway? (is it?)
* What workflow has the image been through? (Device --> Software --> Now)
* Why does your girlfriend think it's fake? (but you kind of think it's real?)
* Do your friends normally mess with you / are aware of your interests?

I like images, so I always ask these types of things.

Blind image authentication is always very difficult and can be time consuming. If it was an alien I'd probably be mad interested.

Can't do much without the original, with EXIF data included.


EXIF data can be edited very easily. I have pictures of Steam locomotives taken in 1860 with an EXIF created date of 1860! (done so it orders by "taken" date in an album). I don't think they had digital cameras back then !

True, but it's a good starting point which may catch out lazy or clueless hoaxers..

Just has a very cliche japanese horro film look to her. Sad standing there head down. Hair like so.

posted on Jul, 28 2015 @ 09:26 AM
link
i'm kind of torn on this one. the quality is really good so I don't think it's photoshopped or anything. and the if the stories about the mysterious house fires in the area are true, and this picture was taken near one of the burned down houses, then who knows. i suppose i wouldn't rule out the possibility that something real may have been captured here on film. can't rule out that possibility yet. i've seen legit ghost photos before in person so i know it can happen. it's just hard to say definitively in this case without having the original.

upon first view the ghostly subject reminded me of the villian/ghost from the movie Sinister with ethan hawke. I believe he was called mr boogie. the woman looks like a female version of that character. like the woman is wearing makeup. but, who knows. maybe something is lingering around one of those burned out houses... 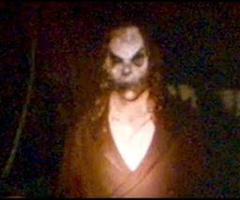 originally posted by: angryhulk
It just looks like a girl in the background looking down, probably at her phone.

that perspective is awkward. she looks well inserted, idk. whoever planted that lady into that image is good in lighting but less good in atmospheric perspective i presume.

posted on Jul, 28 2015 @ 01:33 PM
link
I thought it was fake at first glance itself. I mean I worked as a photo editor and did some Color grading as well, so to me it looked like the color was definitely messed with. They are either two different color spaces (different sources). Or the girl was burnt (the photoshop tool, not house fire ) to make it appear dark. It definitely is not the work of the under exposure due to the backlight. Besides the feathering of the cropping looks plain in the form of a "halo" around her. The color grading is obvious too. No way the "ghost" can look monotone with the vibrant colour of the trees and her t-shirt in the same frame. That's what you get when you use an already graded image... you can just stick it in another image and have the colors come out for it to batch. They are lost in the original edit... and all that the new photo editor can do now is to darken it to blend in better.

Alternatively the real girl's hair is looking manipulated and can be seen in borders with the green of the trees behind. This is definitely not the way a high resolution camera captures images. I have to assube its a high res if the zoom looks like that 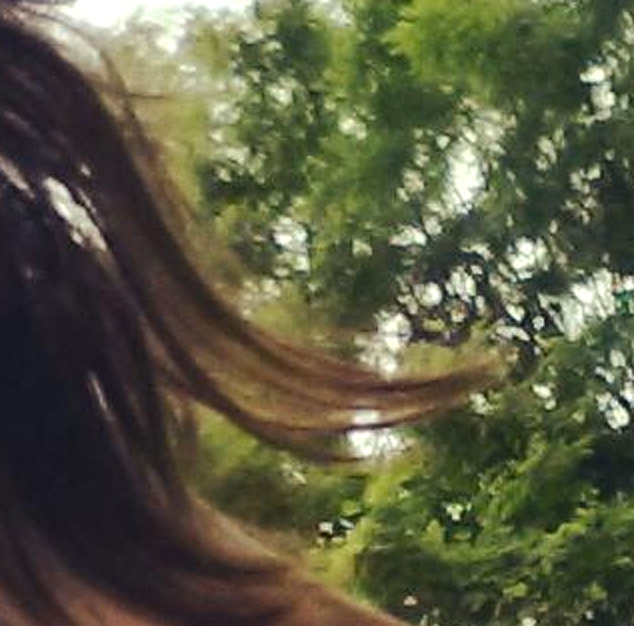