Codes and Ciphers in the Book of Jeremia; Mystery Babylon—Revelation

posted on Jul, 27 2015 @ 09:13 PM
link
In the Book of Jeremiah there are at least three examples of what is believed to be coded names used. The cipher used seems to be a well known substitution cipher called Atbash, or אתבש in Hebrew, as in A=T Ba=Sh — where the first letter is replaced with the last (א=ת) and the second is replaced with the second to last (ב=ש) and so on. Below is a pic I made with the key for both Hebrew and Greek Atbash variants. 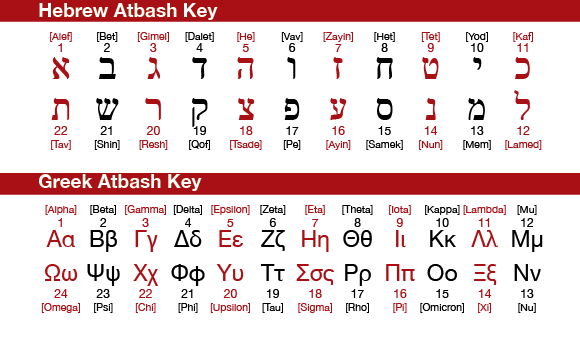 Firstly, let's take a look at the Hebrew Old Testament and the Book of Jeremiah. In Jeremiah 25:26 and 51:41 the Heb. word ששך «Sheshakh» is gibberish, but becomes Heb. בבל or «Babel» (Babylon) when the Atbash cipher is applied (I used King James Version here to show the undeciphered Hebrew word in context):

«How is Sheshach taken! and how is the praise of the whole earth surprised!» [KJV] Jeremiah 51:41

«Thus says the LORD: “Behold, I will stir up the spirit of a destroyer against Babylon, against the inhabitants of Leb-kamai,» [ESV] Jeremiah 51:1

Now, this is fairly simple and rather obvious, and it's well known and many modern Bible translations use the deciphered text one way or the other, or they add a note explaining it. However, isn't there another place in the Bible where Babylon and codes are in motion? Again I'll use the KJV since it has a slightly more relevant translation in this case as it contains the sentence in uppercase letters. Below that again you can see the Nestle-Aland (mostly identical to Westcott-Hort) which is the base of most modern bibles. The uppercase text suggests some sort of code, or a mystery:

«And upon her forehead was a name written, MYSTERY, BABYLON THE GREAT, THE MOTHER OF HARLOTS AND ABOMINATIONS OF THE EARTH.» [KJV] Revelation 17:5

Could it be that the original text of John's Apocalypse (Book of Revelation) contained a coded message here? The text in uppercase does look rather odd, and so does many other words and sentences in Revelation. When I apply the Atbash cipher to the upper-case text above, the text becomes gibberish, or at least that's what it looks like to me. If there is a code here, there must be something I've missed. My guess is that possibly the original Apocalypse was written, not in Greek, but in Hebrew or Aramaic, since big chunks of the Apocalypse text refers directly to the Hebrew Old Testament. However, we know the Gospels and most of the epistles seem to quote the LXX (the Greek Septuagint), so it might indeed have been written in Koine Greek originally.

Another clue as for codes in Revelation, is that many scholars note that many of the early Revelation mss are littered with apparent mis-spellings and are full of what appears to be syntactical and grammar errors. Or. What if those errors were deliberate? What if John of Patmos encoded the text with some sort of cipher that would make the text appear to be full of errors and odd spellings and so on? How I wish we had the original manuscript! The complete message may have been lost forever. I do believe, however, that 'the scroll with seven seals' from Revelation 5 is the original and unedited Apocalypse ms, as penned by John of Patmos himself, so who knows? Perhaps one day we will know for sure....

And. The Book of Revelation contains the sentence «I am the Alpha and Omega» (a hint to Atbash cipher?) in four places, twice in the beginning (1:8 and 1:11), and two more times at the end (21:6 and 22:13). In my opinion, this is hardly coincidental. Alpha and Omega, Alef and Tav, the Beginning and the End, the First and the Last, and it is written in the beginning and at the end. Hm. I think this must be deliberate and that it hints of coded text. First word of Revelation in Greek is Ἀποκάλυψις («Apokalypsis», Eng. «Revelation») in at least all the (modern) Greek documents, while the last word of the book is obscured or at least inconsistent, for there are many variants. Most modern translations seems to conclude with Eng. Amen (Gr. Ἀμήν, Heb. אמן) as does the '1550 Textus Receptus'. But the 'NA27' concludes with Gr. ἁγίων (Gr. «Hagion», Eng. «the holy [ones]»), and the '1881 Westcott-Hort' and the '1904 Nestle' texts have Gr. πάντων («Panton», Eng. All). There are even a few other variants. So much for the imperative warning a few lines earlier, about the curses involved with 'adding and deleting words' of the Apocalypse. Nearly all of the critical Greek texts end with different words. Blimey.

I hope to follow this one for a while!

Here's another hidden code in the Bible and one of the reasons I chose my username.

My Mesopotamian namesake and Noah's cousin Utnapishtim is written in code in the beginning of parashah Noach or Genesis 6:9. Put together the first few syllables of each word in the verse and it reads Utna-ishtim. Close enough I'd say...

«And upon her forehead was a name written, MYSTERY, BABYLON THE GREAT, THE MOTHER OF HARLOTS AND ABOMINATIONS OF THE EARTH.» [KJV] Revelation 17:5

The Greek sentence above reads «Mystery Babylon the Great» and the Greek letters in red corresponds to the latin letters R O M A. The Rho corresponding to R is the sixth letter (2x3). Next the Omega (O) is the 15th letter (5x3), next the Mu or M is the 18th letter (6x3) until finally the Alpha (A) is the 21st letter (7x3). Is it just me, or is there a pattern of steps of 3 here.... Does the Greek text of Revelation 17 contain R O M A written in code? Looks that way to me. Anyone?

ETA: If MYSTERION here is the key, it is relevant that it has 9 (3+3+3 or 3x3) letters and that the R is the 6th letter (2x3), hey, It's even relevant that Σ, which corresponds to Lat. S is the 3rd letter and that between R and O there are 2 steps of 3, and these two letters spell out N B short for Nota Bene (Latin for «Pay Attention» or «Take Note of This»), for the distance between R and O is 9 letters. I'll make a drawing to show what I'm thinking about. Hopefully in time to still being able to add it to this here post. Wish me luck

ETA2: Made it in time Here's the diagram:

See? Is this proof Mystery Babylon The Great is code for Roma?
edit on 30-7-2015 by Utnapisjtim because: ETAs and Misc colour coding + updated pic twice

Here's another hidden code in the Bible and one of the reasons I chose my username.

My Mesopotamian namesake and Noah's cousin Utnapishtim is written in code in the beginning of parashah Noach or Genesis 6:9. Put together the first few syllables of each word in the verse and it reads Utna-ishtim. Close enough I'd say...


Noah didn't have any cousins that lived. He was also known as Utnapishtim.

You wrote QUOTE "My guess is that possibly the original Apocalypse was written, not in Greek, but in Hebrew or Aramaic, since big chunks of the Apocalypse text refers directly to the Hebrew Old Testament. However, we know the Gospels and most of the epistles seem to quote the LXX (the Greek Septuagint), so it might indeed have been written in Koine Greek originally..." UNQUOTE

Actually many of the referents/quotations in the Apocalypse of Yohanon from the Tanakh (especially his translations from Daniel) are often lifted from the same source (literary textual Hebrew underlay Vorlage) as Theodotion's Greek translation rather than the LXX Septuaginta version. Likewise, the Gospel of 'Matthew' also makes use of the LXX only half the time, the other half of the time he seems to be freely translating from an Aramaic Targum version of the Tanakh rather than the LXX.

Can we have that in English

Oh, he did indeed have cousins, but my saying Noah's cousin was Utnapishtim, well, it was a joke eh?