Gun production has doubled under Obama

Gun production has more than doubled over the course of the Obama administration, according to a new report from the Bureau of Alcohol, Tobacco, Firearms and Explosives.

The ATF’s annual firearms commerce report tracks the number of guns manufactured in the United States, which provides an indication of gun sales around the country.

The number of guns manufactured increased by 18 percent during the George W. Bush administration, while the Clinton administration actually saw a 9 percent reduction.

But under President Obama, gun production has spiked 140 percent to 10.8 million firearms in 2013, the most recent year for which data is available.

Pistols are the most popular type of gun, accounting for 4.4 million of the firearms made in 2013, according to the report. Meanwhile, gun manufacturers produced 3.9 million rifles and 1.2 million shotguns.

The number of pistols made has nearly tripled during the Obama administration...

One doesn't really have to wonder why there are so many guns that have been manufactured, and sold as of late... To Me it's a no brainer! Thanx for the Thread here!!!

Production is a result of demand, and a response to people's interest in the shooting sports, which has increased. Go to any range, and ask if usage has increased in the last 6 years--it has. Ask instructors teaching classes in firearm safety and handling if enrollment has increased, and many will tell you yes, with an uptick in female enrollment. My point is interest as a whole, whether for self-protection, collecting, or target shooting seems to have been on the rise in this time frame.

Do I think the surge is a result of "Obama's coming to take your guns!"--only for the paranoid and reactionaries. BHOs reactions to Sandyhook, Navy Yard shooting and others have certainly stoked sales, and created ammo shortages. The Progressive mantra of gun control/gun safety/gun violence hasn't helped either.

posted on Jul, 23 2015 @ 01:41 PM
link
Fear and paranoia. Besides, the number of people that own guns is on the decline (and has been since Reagan). It's just the same people buying more and more guns… and the gun lobbyists (and industry) are laughing their way to the bank.

The ATF’s annual firearms commerce report tracks the number of guns manufactured in the United States, which provides an indication of gun sales around the country.


Somewhat disingenuous, guns 'made in the US' isn't the same as guns 'sold in the US', manufacturers of firearms sell their wares round the world.

I wonder what these same stats reflect when you include exports? The US after all, is the biggest arms dealer on the planet.

That isn't the current Presider's fault.
edit on 23-7-2015 by intrptr because: spelling

I don't really see where anything was said about it being anyone's "fault". Stating "during the Obama Administration" was just establishing the time frame, I believe.

The whole range of biased opinions/deductions are in the source article. I tried to stick to just the "facts" to allow the thread to grow on its own.
I believe in 2nd amendment rights, however, I do believe in some gun control background checks and flat out restrictions.

I agree...national crime stats reflects this.
edit on 23-7-2015 by fshrrex because: (no reason given)

The surge in back ground checks in the purchase of firearms since 2000 says otherwise.

I agree, the office of the President is not to blame for the sizable uptick...nonetheless, I believe the fact WE have a black man in office with a muslim sounding name does feed/fuel a majority of gun buyers worst fears.

You are correct the U.S. is, by far, the largest arms exporter. Also, keep in mind the gun pieces can be manufactured outside the U.S. and then assembled here and still qualify for the "Made in America" tag/label.

Read source article. I only put up the unbiased "facts".

I found these on an ATF report on firearms commerce. 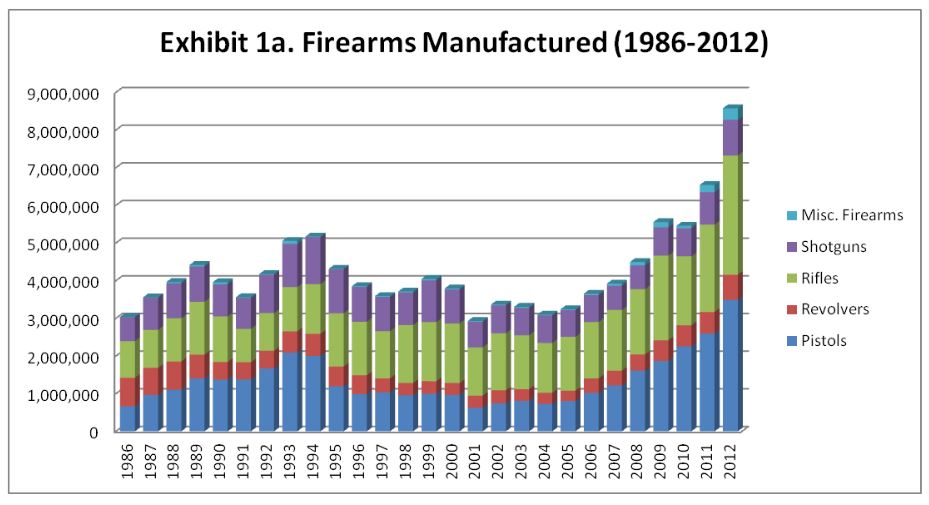 There's a clear rise during the years of Obama's Presidency, but is the correlation evidence of causation?

The cultural hysteria that followed massacres like Sandy Hook will have generated an increase of sales/demand and thereby increased manufacture. How big an increase might be out there in the stats if anyone has the urge to check.

I also wonder if the increasing militarisation of numerous police departments has both reflected and driven growing anxiety amongst some quarters of the general population? When the police are driving armoured vehicles it reassures some people and scares the crap out of others. This can lead to people buying more firearms to defend themselves against the threat that's being implied by the anxiety of the police....a vicious circle.

There's a vocal sub-culture in AMerica that feels threatened by a spectrum of groups and has a disposable income for guns. That's not me making a value judgement, it's just an observation. Some populations are threatened by immigrants, police, terrorists and gang-culture (whatever that infers). They are arming themselves in preparation for dark times.

The import versus export graphs tell a story too. Increasing manufacture and increasing imports with decreasing exports. The States is a major marketplace and the decreasing exports suggest that foreign markets aren't enjoying the same growth. That might be a symptom of US cultural values and especially 'gun culture' America.

Is it Obama's administration generating all these sales? I doubt it...my opinion.

If I wanted to make some money.

I would get myself into office.

but invest heavily in guns.

Democrats are the best salesman for the industry when they talk about bans and gun issues. They seldom really go past the talk phase. Nothing like fear tactics to sell records numbers.

I agree, the office of the President is not to blame for the sizable uptick...nonetheless, I believe the fact WE have a black man in office with a muslim sounding name does feed/fuel a majority of gun buyers worst fears.

You are correct the U.S. is, by far, the largest arms exporter. Also, keep in mind the gun pieces can be manufactured outside the U.S. and then assembled here and still qualify for the "Made in America" tag/label.

“...once again, innocent people were killed in part because someone who wanted to inflict harm had no trouble getting their hands on a gun.”

"At some point as a country, we have to reckon with what happens. It is not good enough simply to show sympathy," he said.

"Citizenship means standing up for the lives that gun violence steals from us each day. I have seen the courage of parents, students, pastors, and police officers all over this country who say 'we are not afraid,' and I intend to keep trying, with or without Congress, to help stop more tragedies from visiting innocent Americans in our movie theaters, shopping malls, or schools like Sandy Hook." — State of the Union address, Jan. 28, 2014.

Firearms purchases have been a direct result of BHO's words and actions, and that of his party. To conclude it is due to the color of his skin and his "muslim sounding name" is shallow and possibly falls to a small minority of gun buyers. To bring race and Obama's name origins into the discussion shows bias that lacks data and is unfounded, and often parroted by the gun control crowd.

Well, kudos to you for editing out the garbage, then.