posted on Jul, 20 2015 @ 06:59 PM
link
I gotta admit, he is making the early election season entertaining, but I think Nate Silver's assessment of the situation is dead on. He will slowly fade once we start getting into the meat of the season. There's a part of me that's drawn to him for his anti-PC-isms and his in-your-face style (ie I think it's refreshing over listening to a political talking head constantly with the sound bytes and apologies), but there's also a (bigger) part of me that would be embarrassed for our nation were he actually elected. In the end, good or bad, he'll fade into the golden sunset and we'll be left with Bush v Clinton. Sigh..


Trump has taken trolling to the next level by being willing to offend members of his own party. Ordinarily, this would be a counterproductive strategy. In a 16-candidate field, however, you can be in first place with 15 or 20 percent of the vote — even if the other 80 or 85 percent of voters hate your guts.

In the long run — as our experience with past trolls shows — Trump’s support will probably fade. Or at least, given his high unfavorable ratings, it will plateau, and other candidates will surpass him as the rest of the field consolidates.

Never under-estimate the power of a true, rampant narcissist. They're very alluring people sometimes. They pull you into their world of me. Convince you that their view of themselves is somehow an objective one that you formed yourself.

Donald Trump is the best at being overtly narcissistic I've ever seen. Anyone who likes this guy, again in my opinion, needs to seriously consider why they feel that way. He's an idiot. Self obsessed, rude, arrogant, vitriolic and intellectually violent. I don't see a single redeeming quality in the man at all, nothing. I see excess and self love. Not attractive traits in any human being.

Why people would VOTE for him? Well now......... Society in decline I suppose. Some people love a rebel, but when your rebel is this horrendous..... Well... Maybe it's time to get involved personally. A vote for this guy is a vote for all the wrong things a person can stand for. Mainly mememememememememememeMEMEMEE!!!!!
edit on 11/10/2012 by Joneselius because: (no reason given)

posted on Jul, 20 2015 @ 07:11 PM
link
Trump is a welcome diversion with his off the wall comments and entertaining, macho, clownish style. Political theater of the absurd for the proletariat; bread and circus for the masses. Sometimes though it seems scripted, phony and over produced. It's all choreographed to look like Trump is being extemporaneous and riffin but it's all calculated to get a certain response and it's working beautifully.
He craves media attention and they will continue to give it to him as long as he stays interesting. He's no Sarah Palin but for now he's the best we got!!!

I'd tend to worry when "The Donald" becomes a cult....it's starting with an almost religious fervor among his supporters.
edit on 20-7-2015 by olaru12 because: (no reason given) 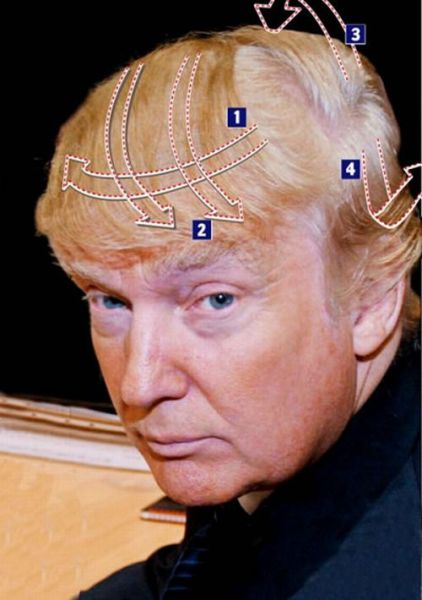 Can't help but watch the train wreck that is The Donald. If by some strange and unexpected planetary re-alignment
should occur and he is elected (pause here for as long as needed to wrap your mind around THAT possibility)
would he be known as TDOTUS? Or T-DOT, for short?

Why can't he pay someone to tell him the truth about that freakin' hair!

originally posted by: darkbake
How many times has Donald Trump ran for president now? At least two total?

Really how many time for Mc Cain now? That old fart needs to go away.

His insults to McCain were f'd up. Simply a messed up thing to say to someone that endured 5.5 years as a POW. Look up pics of McCain returning home. The guy suffered for his duty to his country. Trump is the old fart who needs to apologize for what he said because he insulted something he can't possibly understand. Being a POW.
Who cares how many times McCain runs, at least him being president would be infinitely better than trump.
Trump, if elected as president, would end up being America's Putin.
edit on 20-7-2015 by iFloButta because: forgot to add a 'years' after 5.5

.......So would Mccain. You wouldn't think it as he shares his name with one of the most delicious brands of chips there is. And everyone knows chips can do no wrong.

Where was I again? Oh yes. Mccain this is the same Mccain that sang a song "bomb bomb bomb, bomb bom Iran". Delightful...... NOT.

He will slowly fade once we start getting into the meat of the season.

We wouldn't want him to get in the way of Jeb Bush who is clearly a better option, right?

posted on Jul, 20 2015 @ 07:58 PM
link
Can anyone run for president btw? could Beezer for example just say I'm running for president and have his name on the ballot?.

You want a smoking rabbit on your ballot?

Someone in another thread remarked that the current crop of Republican hopefuls seemed to trying to out-crazy each other. They suggested that the Unibomber looked sane by comparison. I got to thinking about it and realized that I liked the Unibomber better than anyone currently running. He has a doctorate in mathematics, his manifesto made more sense than anything being spouted by any of the candidates, and any world leader or terrorist would think twice before getting on his bad side.

If you don't vote for him, inspect your car before starting it.

It's times like these that I feel glad that the American public doesn't actually elect the president.
edit on 20-7-2015 by VictorVonDoom because: (no reason given)

Why not? He's a black guy and smokes. Who else do we know like that?
He's not quite as entertaining as The Donald but comes pretty close!!
edit on 20-7-2015 by olaru12 because: (no reason given)

McCain "infinitely" better thN Trump?
The past is the past.
The future is now.

McCain blows and has outdated warmongering ideas about America shoving democracy and the Banking tenticles down the throats of other sovereign nations.

Trumps an ass but he's got the right idea.
McCain? Please. He totally sucks for us.

It is almost that easy. You need to fill out a Form 2 and

As for the OP and Trump I am pretty sure to Trump this is all on big joke so can sit back and laugh at how stupid people are.
edit on 20-7-2015 by MrSpad because: (no reason given)

You talk as though he has no redeeming value. He must have some, even in this arena. If anything, he's shaking things up and exposing a disdain for the "politician". I spot similarities between him and Bernie Sanders, in that they speak from the heart - only problem is that Trump's heart is stuffed with hundred dollar bills..

I'd vote for Sanders long before I'd even consider voting for Trump (I shudder just typing those 3 words).

It's times like these that I feel glad that the American public doesn't actually elect the president.