We all knew it wasn't about a flag.

What should the city be changed to? Something neutral? A Union General's Name?

This country is in need of some SERIOUS Chemotherapy!

Left, Right, their psychopathic tribalism has become a cancer on society!

nevermind
edit on 17-7-2015 by rockpaperhammock because: (no reason given)

Members of the California Legislative Black Caucus have asked the mayor of Fort Bragg, in the northern part of the state, to seek a change in the city’s name to disassociate it from the Confederate army general for whom it is named.

Me thinks they doth protest too much.

Well I guess planned parenthood has to change it's name too.

I guess the democratic party has to change their names too.

Both have deep,dark sorted history with racism, and bigotry.

Back to 'renaming' Fort Bragg.

All this crap going on in the US is a lag of what is already happening in the EU! Where the hell ya gonna go? The planet Earth is at stage 4 cancer status!

Take a look at Climate Change, and how the UN preaches it is about taxing those countries to HELP bring third world countries into the "Modern World"?

Do you see that happening or do you see the Western world being brought DOWN to third world status?

posted on Jul, 17 2015 @ 10:42 PM
link
I think its time for another world war or a planetary environmental purge. The planet is infested with morons and they all need to go in order for humanity to gain whats left of its dignity.

Who wants to push that big red button? I would welcome any planet killer asteroid right now. Anything to get rid of these wasted carbon lifeforms contaminating the universe. 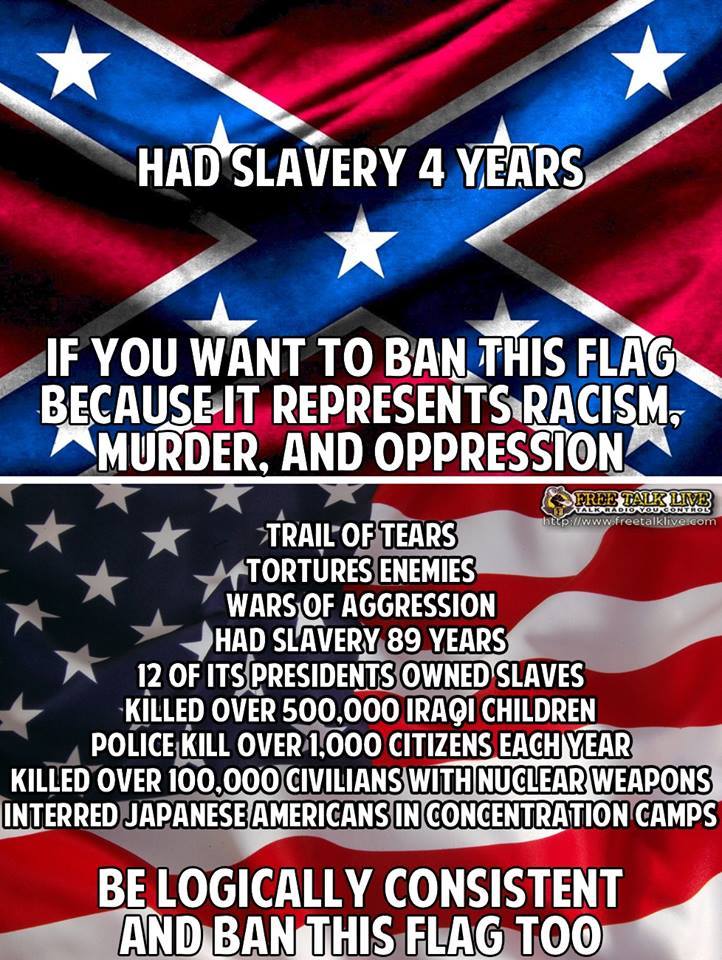 But I am not holding my breath for the 'pc' crowd to either be logical or consistent.

Enough of this garbage!! Did we all step into bizzaro land?! Does anybody else get the feeling that this is all planned and staged and someone is purposely pushing and pushing trying to see how much more it will take before people finally snap. Personally and this is just my opinion here, I feel that obama or his handlers are behind this to either stop the coming 2016 elections or put them on hold for awhile. (Again, this is just my feeling, opinion, ect)

posted on Jul, 17 2015 @ 11:38 PM
link
If they don't like it, "Don't let the door hit you in the ass on your way out", I'm sick and tired of the senseless bleeding heart whining! if they feel so wronged about what happened hundreds of years ago, let the government do them right, renounce their citizenship and get them a one way trip back to their mother land. Not just blacks, Irish, Latinos, Asian, Muslim, English, whatever...

posted on Jul, 17 2015 @ 11:52 PM
link
I honestly believe there is a dangerous divide being fomented within the United States. Both "sides" are playing their parts in this and the outcome escapes me.

There really can be no winner in the event of a war or even martial law (which will breed anarchy). However, this seems to be what is being pushed heavily in the media.

I can understand wanting the Virginia battle standard off the state building and/or grounds. Even I admit that is just human decency and common sense.

Renaming cities? Destroying monuments? Disturbing the dead for the sake of political correctness?

No, those things are just being done to rub peoples face in #$#& and try to get a rise out of them. If they can can provoke an action it will justify a reaction.

Our nation, like many nations has a bloody and dark history. It would seem countries do not come into being whole and filled with light. Like life they must struggle first through blood, darkness, and pain. Rather than attempt to forget (or Gods forbid change) history, perhaps we would all be better served learning it more fully.

Fort Bragg, should remain Fort Bragg and people should be made aware of where the name originates.

Enough with the rabid nonsense already. If something didn't offend you three months ago, it doesn't suddenly offend you now. End of....

posted on Jul, 18 2015 @ 12:19 AM
link
What the hell does Fort Bragg and people waving confederate flags have to do with some nutcase shooting people in a church?

It would seem like the kind of madness I would expect to come out of California. I find myself shaking my head and wondering if some of the members of the California Legislator are in need of a mental health check. California faces a serious water shortage and this is the biggest concern of some politicians.

You may not be too far off the mark.

originally posted by: semperfortis
a reply to: 200Plus

Perhaps we could be the "loosely associated group of states that do what they want...of America"

Sometimes the squeaky wheel gets grease, other times it gets replaced.

We are headed for some fun times!

originally posted by: beezzer
a reply to: 200Plus


Sigh, Beezer, Don't worry, remember, we were all ASSURED that this would end with the flag. NOBODY is trying to erase history. The 3 Amigos will be along soon to offer subtle ridicule and assure you once again, that you are just being over dramatic.