The Republican Debates, who's on your shortlist?

There are 15 major Republican candidates running in these GOP primaries (if we are to assume Scott Walker is jumping in as well) so there will be at least 5 losers. Here's my shortlist:

Jeb Bush - The best bet thus far. Raised $110 million already in campaign money, carries the Bush name and the connections that come with it!

Rand Paul - The favourite for the Libertarian wing of the party. One of the tea party candidates.

Marco Rubio - Another favourite. If Jeb's out, Rubio is in as he can appeal to Floridians (Florida is a must for the GOP in 2016). He's also hispanic!

Ben Carson - Tea party favourite, gotta appeal to that wing of the party. He's also black so that's a plus. Good to have at least one in the GOP debates to appear inclusive folks.

Trump - Oh boy oh boy, he is a must. Need to appeal to that... other wing of the GOP.... not to mention, he'll be instrumental to the debate ratings.

Carly Fiorina - To be honest, she doesn't have much appeal to her other than the fact she's a GOP female counterweight to Hillary. Let's be real here.

Ted Cruz - Another Tea Party nut. Gotta make sure you appeal to that wing of the party. He's also got Texas. Gotta keep them Texans happy... not that it matters as they'll go GOP regardless. But still, just to be safe.

Scott Walker - Oh he's running, and he appeals to all bases of the GOP. Watch out for him!

Rick Perry - He's probably the one with the least of a chance to get the presidency but like it or not, Rick still carries weight in the GOP. He was a relatively popular governor and he has plenty of connections. As with Cruz, keep em' Texans happy. If Florida gets two, then Texas should get two as well!

Chris Christie - He barely makes my short list. Now I know, I know, what am I thinking? Chris Christie?! He doesn't have a chance in heck! But look understand, he's from a blue state. He's governor of a blue state. Yes, getting New Jersey in the GOP box is a pipe dream, but GOPers can dream can't they. He's going to be in the debates. Again, comes back to being inclusive as well.

Those who did not make it:

Rick Santorum - Has been. Nil appeal in the GOP. Teddy already fills the void in terms of evangelical appeal.

Lindsay Graham - He'll always be viewed as just a senator.

Bobby Jindal - No. Just no. Sorry but he's just not popular at the moment. Ben already fills in the minority gap in the debates. Louisiana is also not much of a factor state in the elections. Nah! out!

Mike Huckabee - Has been. We already have a Fox host for the debates as well.

I feel bad for not having a very thoughtful reply to match your thread.

I think the GOP candidate that would do the least amount of damage (and possibly some good) would be Rand Paul. If a republican wins, he's the only one I would be almost ok with (especially if Hillary is the alternative).

I am the same Cuervo. Rand is the only Republican I can tolerate.

It's going to be a bloodbath.
My bet is Jeb gets the nomination, but it is just too early.

There are some good gaffes on the way.

originally posted by: Southern Guardian
Still you gotta admit... the GOP debates will be entertaining.

They always are! It's something I look forward to every election cycle. That and Bad Lipreading Youtube videos on the candidates.

Obviously, we need Trump there to say the things the others won't and make them respond honestly. Looking at Trump's poll numbers, the things he's saying are resonating. So that's why he needs to be there. If he's not, the moderators aren't going to ask those questions and the candidates aren't going to respond. Trump will make it impossible to ignore and might scare a little honesty out of someone. I'd like to see who that is. He might also flame up Jeb Bush, and I look forward to that roast.

I'm a fan of Scott Walker. Really want to see him in the top spot.

He's done a damn good job running his State and would make a great POTUS.

posted on Jul, 14 2015 @ 08:07 AM
link
I was wondering if Trump would ditch the debates all together. You know, twist it around like he dumped that establishment bs. He hates to share the spotlight, and he has to know he will get hammered, debate isn't his strong point. It means he will have to take turns and listen...again, not his strong suits.

If he ditches, but watches, he can then use everything everyone else says to hurl insults from his platforms that he has created via social media, to rebut in his own special way.

Toss in a huge media stunt scheduled for the same scheduled time to lure in his loyal followers and distract them from even watching the others speak....and taadaa!

Total speculation on my part...but it wouldn't surprise me.

posted on Jul, 14 2015 @ 08:26 AM
link
I want to see Rick Perry; I can't wait to see what else he can't remember. Throw in Rand & Trump for some added craziness; this will certainly be entertaining...in a painful sort of way.

Good summation of the candidates.

For my money, Dr. Ben Carson has been my favorite from the beginning.
I've seen him quietly surge to the upper tier of candidates on a steady climb...and he still hasn't shown us everything he's got.

For the debates? I can't wait to hear Carson truly unleash his intellect...which I believe is superior to the others (with the possible exception of Cruz).

Carly Fiorina is another candidate I'd love to see in action during the debates...and Scott Walker is impressive in his own right for his record as Gov.

Christie and Trump and a big bowl of popcorn. That's all I care about!

originally posted by: ketsuko
Your list looks good, but I'd prefer to see Jindal replace Perry or Christie.

Obviously, we need Trump there to say the things the others won't and make them respond honestly. Looking at Trump's poll numbers, the things he's saying are resonating. So that's why he needs to be there. If he's not, the moderators aren't going to ask those questions and the candidates aren't going to respond. Trump will make it impossible to ignore and might scare a little honesty out of someone. I'd like to see who that is. He might also flame up Jeb Bush, and I look forward to that roast.

Trump needs to be there so that the rest of the GOP candidates can tear into his ego by exposing all of his hypocrisies.

I know this may sound cynical, but, "At this point, what difference does it make?"

I'm no Republican...I'm actually a registered Libertarian. That said, I'd have to go with Rand, and if I can't stand with him at the finish line, I'll just vote my conscience and go with the libertarian candidate again...most likely. I can have a strategist's mindset, so it just depends on who the Democrats' candidate is. I think that Hillary would be an ineffective president (like the current one), but might possibly be a tad more open to compromising than Obama, who is strictly an ideologue. But if Sanders gets the nod, he could do some real damage to the fiscal state of our nation--worse than the damage that has already been incurred by a Bush-Obama back-to-back debacle.

Neither D candidate would get my vote, and only Paul (at this point) would get mine on the R side.

I dunno which 10 they'll cram on that stage, but if the Don is one of them ,expect to have the others just basically sit there and look stupid while he runs his mouth.

Ben Carson said he's not opposed to running with Trump, which is scary in itself.

Been saving this one: 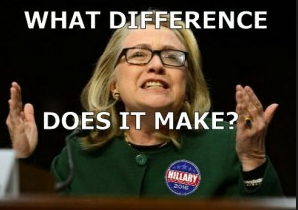 It's true, it doesn't matter. I'm just in it for the entertainment factor! Rand Paul is the least dangerous of the bunch, IMO, but there's some huge entertainment potential among the others!

posted on Jul, 14 2015 @ 11:53 AM
link
My short list is very selfishly for my own amusement. Put the following into the debate, and get ready to laugh my ass off:

originally posted by: Southern Guardian
Still you gotta admit... the GOP debates will be entertaining.

Oh, good grief.....you have to be kidding. Entertaining? With the possible exception of Trump and Rubio, they've got the personality of cardboard and the debates will be largely scripted.

I won't be watching any of the debates; they bore me to tears. Lying sycophants anxious to tell J.Q. Republican what they think he wants to hear.