posted on Jul, 13 2015 @ 08:34 PM
link
So first we had the big biker shootout in Texas where a large number of armed people was absolutely no deterrent to gun violence killing many people. Now Chicago had yet another murder spree in spite of the fact that their gun ban was overturned a few years ago prompting gun fanatics to decree that gun violence would be a thing of the past. You know, because supposedly a lot of people having guns magically prevents all violence from ocurring. Apparently not.

If the government don't want Americans having guns, stop equipping the police and security like their military.

If a civilian wishes to own a gun, to each his own. As long as they are responsible and went through the tests to be licensed, good for them.

For those who's only weapon is debating and opinionating. .. shut up already. Beating a dead horse.

Btw, for all we know, both the shootouts you talk of could of been by design. Like some obvious events covered on ats over the years...

Oh look, someone has drawn ''people are idiots'' over there, it's the pencils fault

Domo1
+5 more
posted on Jul, 13 2015 @ 08:40 PM
link
If you're going to take a statistic crap how about the fact that there are currently more guns in the US than ever, more states allowing concealed carry, and violent crime has been dropping annually?

Chicago is also a gun free zone as I recall, so what do you propose as a fix? It's also illegal to murder someone with a gun, but that doesn't seem to stop anyone.

Law abiding people with a good record and a concealed pistol license are statistically much less likely to commit ANY crimes.

Should we tell him?

Where I live there are no tests. If you're 18 you can buy a long gun, if you're 21 you can buy a handgun (with a clean background check). If you're 21 and have a clean record you get your fingerprints taken, they check your background and you get a license to carry a gun. I actually think there should be a test personally, at least for concealed carry.

posted on Jul, 13 2015 @ 08:43 PM
link
WE of course mean NON THUG owned guns when we speak of gun ownership ,the LEGAL kind only.
Criminals are are mostly selfish and LACK balls to be protectors anyway.

Because there there was ZERO violence before the invention of the gun, right?

So you choose one of the most ridiculously and notoriously anti-gun cities to try and support your argument about guns? Guess who has guns in Chicago? Cops and bad guys.

This thread doesn't fail out of the gate. This thread got put down in the stables for coming up lame before it was even race day. 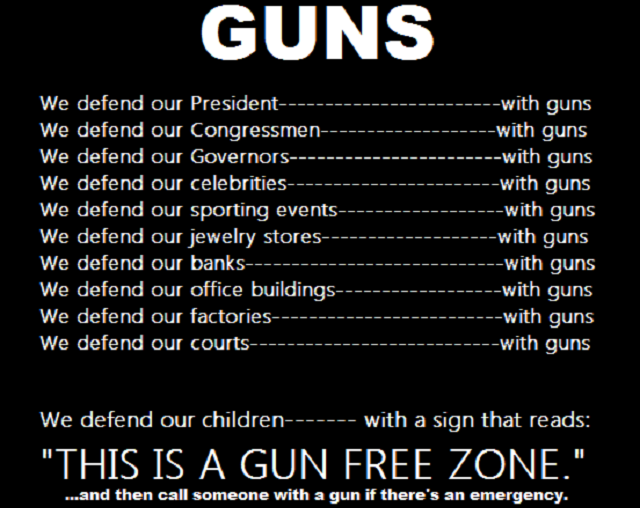 Banning guns OBVIOUSLY hasnt helped, irregardless of where in the world its tried.

So why make it so difficult for law abiding people to exercise their God given or naturally occurring right of self defense?

I'll tell you why.

Because the gun grabbing agenda is not about curbing violence (something the useful idiots dont realize). Its about disarming the American public.

And every so often, the agenda gets exposed:

I am thinking again.

How do you separate criminals from non-criminals?

posted on Jul, 13 2015 @ 08:59 PM
link
One of the things I think most people that make this argument miss completely is that legislation against firearm ownership simply wouldn't work in this country. At all. It's trite, but only the honest would suffer.

The kind of people that murder are going to either find another way, or are going to own a gun illegally. There are so many guns in circulation in this country I don't believe for a second if all were made illegal it would be hard to find one on the street for anyone with a few bucks. It's apparently pretty easy and relatively cheap to get an AK in Europe.

So with the astronomical amount of firearms owned by civilians illegally, why should people who are model citizens by every reasonable metric not be allowed to defend themselves with the same sort of force multiplier? Why should I have to protect my loved ones and myself with a golf club when so many jackasses have easy access to illegal guns, and use them in home invasions? One of my greatest fears is ever having to use one of my firearms to protect myself, I would struggle for the rest of my life with guilt if I ever had to use one, but I think it's disgusting that some people think it's OK to disarm the law abiding while completely ignoring the FACT that guns will be easily obtained by ne'er do wells with or without firearm restrictions. Tell me how well Marijuana laws work in most of the country, or how well prohibition has.

posted on Jul, 13 2015 @ 09:01 PM
link
How do two examples in which criminals cause mayhem and murder with guns, equate law-abiding citizens owning and/or carrying guns?

Here's a newsflash for you, OP:

Criminals don't license their guns, they don't concern themselves with gun safety, no law keeps a criminal from obtaining weapons with which to commit violent crimes, and they sure as hell don't care who happens to be in harm's way, when they fire those weapons.

The only thing more dangerous to this country than so-called 'Gun Fanatics', are the 'Anti-Gun Fanatics', and their draconian approach to "safety", that has, thus far, failed miserably in saving the lives of victims of criminals with illegal guns.
edit on 7/13/2015 by ProfessorChaos because: fixed bold

In the 1980's, Margaret Thatcher had a complete gun recall in the UK after a school shooting.

There's not been one since.

There is a DIRECT correlation with countries that have strict gun control and low gun crime.

Places like Japan, UK, and several others where there are strict gun controls have some of the lowest gun crime rates in the world.

Places like USA, Mexico, Venezuela where there are few gun controls have the highest gun crime rates in the world.

if you have a gun in the house, you're at least 6 times more likely to have it used on YOU during commission of a crime than you are to use it to defend yourself.

The NRA has managed to successfully convince the easily brainwashed masses that this is not the case.

With gun control, just like many other things that are causes of the far right wing, you have to be totally devoid of seeing the basic facts of things going on around you right in front of your face to believe much of what they're telling you.

The second you say "hey, wait a minute, that doesn't seem right", you're ostracized from the group and ridiculed, so no one speaks out because of fear of ridicule.

Just like religions that banish people who question their place, anyone who questions the right wing brainwashing is put out to pasture, and separated immediately from the rest of the flock.

How do we get rid of them?

We don't agree often, but on this issue...

posted on Jul, 13 2015 @ 09:08 PM
link
I can remember a time, not that long ago, when the NRA was there to promote Gun SAFETY, which is the foundation of their organization.

The NRA has been hijacked by the gun manufacturers and right wing idiocy. I remember when it used to require very significant force to fire a gun. You had to have a pretty strong trigger finger to even make it go off.

Now, a 6 month old baby can fire guns that their irresponsible parents leave lying around the house.

Of course, NRA has also convinced people that you can't have a trigger guard, because it would take time to remove it if you had to protect yourself.

Guns also can't be locked in safes, because it would take time to remove them if you had to protect yourself.

When you look at the stats of accidental gun deaths vs the deaths of people from gun crime where someone broke into a house and they had time to grab their gun and defend themselves from an attacker, you'll be ASTOUNDED.

But the right wing second amendment nuts have been brainwashed that this is business as usual.

I have a right and even if you don't like it, I still have that right.

When tyrannical government comes for you, what else do we have?