posted on Jul, 3 2015 @ 12:03 PM
link
If you have ever been to a Jewish wedding or a bar/bat Mitzvah or other Jewish celebrations, you have most likely heard the Hebrew/Yiddish term "Mazel (מזל) Tov (טוב)" being expressed. Mazel Tov is commonly translated to mean "Good Luck" or "Good Fortune", but the original meaning has been partially lost. Apparently the expression is originally rooted in astrology, where Mazel refers to a person's "Astrological Sign" and Tov means "Good", as in "Knowledge of Good (Tov/Tob) and Bad (Ra)". So in short you might translate it to mean "Good Star" or "Lucky Star". Judaism has always had a rather adversity or disregard towards astrology, and a Rabbi could tell you that when God blessed Abraham, he said Abraham was to be exalted "Above the Stars", in other words, Jews should not deal with astrology, or consider omens and read fortunes. But nevertheless, according to my lovely book called The New Jewish Encyclopedia (by David Bridger and Samuel Wolk) the term Mazzal (same as Heb. מזל "Mazel" in "Mazel Tov") — «was originally applied to a star, a constellation, a planet, and in particular to a sign of the Zodiac.»

Now, if we look at the Heb. word Mazel, it does look a bit like the Medieval Latin word Missale, meaning Book of the Mass, and refers to a Catholic manual for the Mass throughout the year and contains liturgical material and texts for each mass, or like Wikipedia defines it, «A missal is a liturgical book containing all instructions and texts necessary for the celebration of Mass throughout the year.» 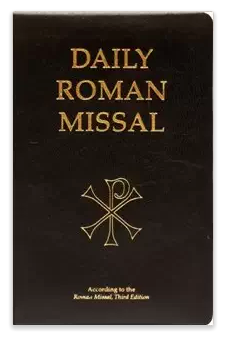 Both Heb. Mazel and Lat. Missale has to do with the calendar and seasons, and the two words sound similar, and may indeed be directly or indirectly related, though I cannot find anywhere where this association is discussed, but perhaps the Catholic Church inherited this pre-Christian system of Mazel reverence and reshaped it to become the Catholic Mass, where Mass derives from Vulgar Latin *Messa, which translates into «eucharistic service». The Hebrew term for the Eucharist is סעודת ישו or "Sa'udah Jesu" lit. "Feast of Jesus".

posted on Jul, 3 2015 @ 12:51 PM
link
never heard about something like that. I tried to look for information about your query in Hebrew but found nothings that can point about a relation between the two words.

"Mazel Tov" is a common expression in Hebrew/Yiddish that today has acquired the semantic meaning «Congratulations!» or lit. «Good Luck!» but has its distant roots in astrology, like I showed with the quote from The New Jewish Encyclopedia.

Heb. Mazel sounds almost identical to Lat. Missal. I interpret this similarity much like how the Church acquired existing pagan feasts and continued using the traditional names for them while changing the contents. Like how in Norwegian we call Christmas «Jul» which refers to a pagan sacrifice festival carried out at Winter Solstice. Or how in English the Christian variant of Jewish Passover (Pasche) is called Easter, another pagan festival. The Church did this on purpose, in order to take over the traditional festivals observed and celebrated by the pagans.

Also, the plural feminine of Heb. Mazel is Mazaloth/Mazaroth (Compare with Strong's H4208 and Strong's H4216), and it means Zodiac or more precisely the Signs of the Zodiac, the Constellations.


The word mazel literally means “a drip from above.” Mazel can have different connotations depending on its context, but they are all connected to this basic definition—something trickling down from above.
[...]
There is another meaning of the word mazel that is more relevant to the phrase Mazel Tov. Mazel is the term used in Jewish mysticism to describe the root of the soul. The mystics say that only a ray of our soul actually inhabits our body. The main part of the soul, our mazel, remains above, shining down on us from a distance.

These semantics seem to fit in nicely with Medieval Latin word Missal, the name of the Roman Catholic manual for the Mass. The Mass is a way to lift worship to heaven and bring down or collect the blessings from above. This is indeed consistent with Hebrew Mazel.

The word Mass in a religious setting, comes from the Latin phrase «Ite, missa est» (en.wikipedia.org...) which means «Go, the dismissal is made» or as it's commonly translated these days: «Go forth, the Mass is ended.» There is movement implied, and the movement goes from God in Heaven to the People of Earth, as if God sends his subjects on a «Mission». Lat. Missa is perfect passive participle of Lat. mittere (to send).

According to my lovely book called Born to Kvetch by Michael Wex, in Yiddish «unleavened bread» (like the Christian oblation at Eucharist central in the Roman Missal) is called Matse, again same word, and a direct connection between the Latin word for Mass and the Hebrew. One could transliterate Matse into Mazze, closer to Mass/Messe.

posted on Jul, 3 2015 @ 02:12 PM
link
Just because two words look/sound similar or have a similar meaning doesn't mean that they're in any way related. Have you tried finding any sort of actual etymological connection?

when God blessed Abraham, he said Abraham was to be exalted "Above the Stars"

Maybe Heaven is beyond the stars? And being "exalted above the stars" actually meant being exalted in Heaven?

originally posted by: admirethedistance
Just because two words look/sound similar or have a similar meaning doesn't mean that they're in any way related.

I am well aware of that, but being an amateur linguist myself I like to make my own more or less educated assumptions. This connection between Mazel (soul, constellation, luck), Mazeloth (zodiak, plural or Mazel), Maze (or Matse, unleavened bread)— well these truly and directly related words in Hebrew (and evidently in modern Yiddish) I believe turned into the Latin words and phrases discribing RC liturgy of the Mass and more precisely the Eucharist.

Have you tried finding any sort of actual etymological connection?

Indeed I have, but even though there is plenty evidence of Hebrew influence on especially Norse, Old English and Old High German (and often via Latin), I think you will have a hard time finding even one serious philologist or linguist who would dare to embark on a voyage (read: odyssey) into the shadowlands between different lingual families, like the Indo-European (ex. German and English) and Semitic (Hebrew and Arabic &c) language families. As far as linguistics is concerned there are no direct relationship between Semitic and Indo-European languages. Ever. Especially if religion is involved somehow. It simply helps them rationally to exclude these sometimes obvious connections. The closest you'll probably get is to hear them acknowledge Yiddish as a Hebro-Germanian hybrid, but you'll most likely just get the response: «No comment.»
edit on 3-7-2015 by Utnapisjtim because: (no reason given)

Hebrew is my mothers tongue language and i speak Hebrew and read Hebrew every day... I didn't just casually made my comment

Fair enough, but different dialects of Biblical Hebrew and -Aramaic are not the same as modern Hebrew and Yiddish. It's like with Old English and modern English, or say, classical Koine Greek and Modern Greek-- same languages, but entirely different all the same. Besides, I am talking linguistics here, and I treat stuff like morphology and phonetics, etymology and semantics. It helps to speak the languages you are working with fluently, but it's not really necessary.

Comparing archaic languages (like Classical Hebrew vs Ecclesiastical Latin) is not just about comparing lexical entries, you enter a world of pretty much eh weirdness. Ecclesiastical Latin is also an artificial or revoked language, the same could be said about Modern Hebrew. Even though I am Norwegian and speak Norwegian fluently, I am not automatically an expert in linguistics and Old Norse, right? In the OT alone, there are several different stages and dialects of Hebrew and Aramaic used, and for one we don't even know how these archaic languages sounded and were spoken. But like I said, fair enough, your criticism is relevant.
edit on 4-7-2015 by Utnapisjtim because: (no reason given)