George Takei: Clarence Thomas is a "Clown in Blackface"

posted on Jul, 3 2015 @ 11:08 AM
link
George Takei is catching flack for his seemingly racist statement against Clarence Thomas, Supreme Court Justice, for his dissenting comment on the recent "Marriage Equality" ruling.

George Takei takes issue with that statement and vehemently disagrees! For those of who don't know, George Takei is a gay Japanese American and is married to a man, Brad Altman.

“For him to say slaves have dignity, I mean, doesn’t he know that slaves were in chains? That they were whipped on the back?” Takei said. “My parents lost everything that they worked for in the middle of their lives, in their 30s. His business, my father’s business, our home, our freedom and we’re supposed to call that dignified?… This man does not belong on the Supreme Court. He is an embarrassment. He is a disgrace to America.” 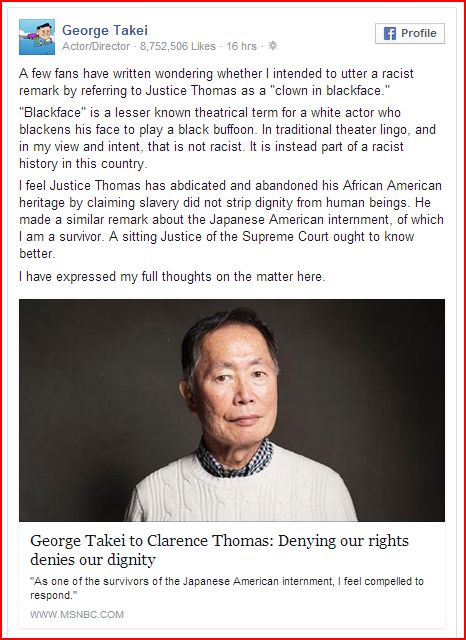 Now, for those of who may not know what "Blackface" is ...

A brief history of blackface

I agree with George, Clarence Thomas' recent statement makes him a "Clown in Blackface"!

Let's be honest. The ONLY reason you attempt to justify Takei is because you agree with him and don't agree with Thomas. There is no other reason.
edit on 3-7-2015 by ketsuko because: (no reason given)

Larry Wilmore raked him over the coals too. Go Larry.

There’s been a lot of talk about Supreme Court Justice Scalia’s scathing dissent in the historic gay marriage ruling last week. However, “Nightly Show” host Larry Wilmore saved his best shots on Monday for Justice Clarence Thomas’ just-as-vile conservative ramblings, in which he used a slavery analogy to make the case for how the government had overstepped.

He wrote: “Slaves did not lose their dignity (any more than they lost their humanity) because the government allowed them to be enslaved.”

“Do you even know what slavery is?” Wilmore asked. “Slavery is the complete stripping of humanity and dignity. That’s the point of slavery. When do you think slaves were whipped? Whenever they tried to dare to show any humanity or dignity.”

I think what was said was supposed to be interpreted differently. Maybe what he was trying to say is that dignity can not be taken away by the actions of others. Dignity is something we own.

Yes, I agree that was what Thomas was trying to say, but I don't agree. People CAN have their dignity ripped away from them through slavery, imprisonment and bigotry.

Speaking of which, the SCOTUS ruling was all about how letting gays marry would give them dignity. I don't see how Takei gained any dignity from it. His behavior and remarks were highly undignified.

Yes, I agree that was what Thomas was trying to say, but I don't agree. People CAN have their dignity ripped away from them through slavery, imprisonment and bigotry.


So basically, you think the sole worth of an individual is in the hands of others?

What a very sad and insecure you must lead. Are you a product of the empty self-esteem movement?

HAHA! I haven't seen it yet, but "The Nightly Show" repeat will be on in a few minutes! Got the Daily Show" on the tube right now!

I should have known Larry Wilmore would take on Clarence Thomas after his show on the "n" word! LOL

originally posted by: ketsuko
Oh, so you're a racist too. Noted.

Let's be honest. The ONLY reason you attempt to justify Takei is because you agree with him and don't agree with Thomas. There is no other reason.

Yep. I agree that what Thomas said was dumb, and I don't agree with it.

Well having been one that was abused by someone and understanding it from a deeper level, I refused to give the actions of another the right to take away my dignity.

Dignity is defined as:


dignity
[ ˈdignitē ]
NOUN
the state or quality of being worthy of honor or respect:
"a man of dignity and unbending principle"

You do not have the right to take away my worthiness or self respect through your actions.


So basically, you think the sole worth of an individual is in the hands of others?

Lots of things can rip your dignity away from you.


the state or quality of being worthy of honor or respect:

Seems to me that this "respect" that one is worthy of, comes from someone other than oneself.

The word worthy can only mean in the context of another person, you are not going to be worthy to yourself are you?

wor·thy (wûr′thē)
adj. wor·thi·er, wor·thi·est
1. Having worth, merit, or value: a worthy cause.
2. Honorable; admirable: a worthy fellow.
3. Having sufficient worth; deserving: worthy to be revered; worthy of acclaim.

I agree with George, the Justices statement was full of ignorance.

When I first saw this a few days I was ready to agree with Takei without knowing what Thomas actually.

When I actually read what Thomas said, I thought, "He (Thomas) is not exactly wrong."

While slavery *can* certainly break people's spirits, there were MANY slaves who held on to their dignity and that's one of the things that made them so strong in the face of such conditions. It reminds me of the attitudes and comments by the families of the victims in Charleston: theirs spirits are so strong, and they have such dignity.

While many slaves lost their dignity, I'd say more than not retained—if not gained—dignity, which is why I respect them so much (and I read a LOT of slave narratives).

What I see people saying here is:

It's ok to say an extremely racist thing if you are liberal
and directing it to a conservative.

But if any conservative called an important black man, a black leader in government, "a clown in black face", well, he'd never work again in hollywood, ever. Regardless of the context and anything subsequently said. Liberals would send him hate mail and death threats, regardless of the context in which it was said and make his life hell.

I see a bunch of hypocrites here!

Where is Jesse? Where is Al?
They are hypocrites also because they say nothing
because it is always in their eyes ok for a liberal
to say as racist of things as they want
as long as the racism is directed toward a conservative.

posted on Jul, 3 2015 @ 12:19 PM
link
Hmm, who to believe? Maybe some people are strong enough to not allow others to define them, even if others abuse and humiliate them at every opportunity. No matter how much you beat up a person you can't change their mind--or destroy their dignity--until they allow you to. You can physically limit them, but until they submit to you mentally... They must allow you to define them first. Otherwise, they're never your slave. They might follow your orders, but they'll be plotting against you. A slave master doesn't want a slave who harbors self-governance. So the first thign a slave master must do is destroy the person's mental defences.

I agree with both of them. Some people you cannot destroy their dignity or self-worth or humanity. Those're the people with the strongest wills and sense of self. While others you can. They're the true slaves.

But to me this is all a distraction. IS marriage between same-sex couples a right which is equal to marriage between a man and a woman? As I understand traditional marriage, it's aimed at couples reproducing and caring for their children. Marriage is not simply two people coming together and loving each other. It's two people coming together, reproducing and caring for their offspring.

But was marriage ever defined that way? I'm not sure. If marriage was always ever defined as simply two couples coming together to love each other then George Takei is right to behave this way. But if marriage was defined as something where the two couples reproduce and care for their children then it's completely misplaced for George Takei to want something which is inappropriate for him. It's like a engineer wanting the same uniforms worn by doctors and demanding it as a right. It's like a screw demanding a square hole rather than the usual round one it produces.
edit on 3-7-2015 by jonnywhite because: (no reason given)

"The Japanese American Citizens League is appalled with Justice Thomas' correlation that ties laws prohibiting same-sex marriage to the imprisonment of Japanese Americans during World War II," Ouchida said in a statement.

"The government's actions to incarcerate every man, woman, and child of Japanese ancestry in 1942 are contrary to the principles of individual rights and due process," Ouchida continued. "The mass removal of Americans from their homes was tantamount to the destruction of a community, a culture, and an American system of constitutional protections. And, as suggested by Justice Kennedy in his majority opinion, dignity is inherent in notions of due process where individuals cannot be deprived of life, liberty or property. There is no dignity in inequality."