A Taste of Their Own Medicine 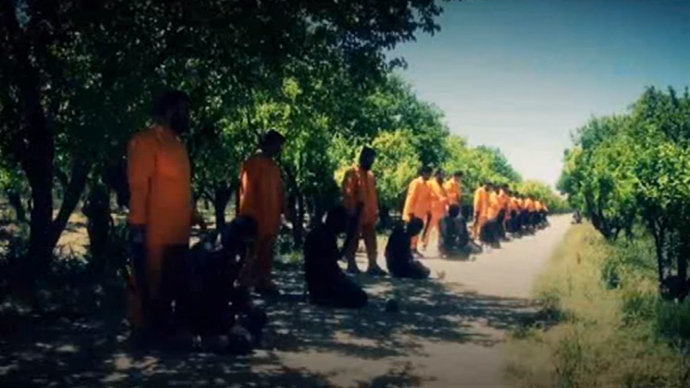 The Syrian opposition group, Jaysh al-Islam has executed 18 alleged Islamic State militants. A video emerged of the rebel organization imitating many of the jihadist group’s own execution recordings, including similar sound effects and visuals.

The clip, which was just under 20 minutes long, showed fighters from Jaysh al-Islam (Army of Islam) wearing orange prison attire, that victims of Islamic State (IS, formerly ISIS) are often executed in.

Jaysh Al-Islam is Sunni so let this serve as proof that their are Muslims fighting ISIS , We just don't here about it over here in the US.

I am not sure how i feel about the Executions because as a student of Islamic Fig ( Islamic law / Jurisprudence) I can say that these men should have been put on trial and judged accordingly .

rom their essentially political position, the Kharijites developed extreme doctrines that further set them apart from both mainstream Sunni and Shiʿa Muslims. The Kharijites were particularly noted for adopting a radical approach to Takfir

(Arabic: تكفيري‎ takfīrī) is a Muslim who accuses another Muslim (or an adherent of another Abrahamic faith) of apostasy. The accusation itself is called takfir, derived from the word kafir (infidel), and is described as when "one who is, or claims to be, a Muslim is declared impure."


Their are mixed Opinions from the Scholars on this . The opinion that i find most accurate is

Rulings of fighting the Khawarij: The aim of fighting is to deter them. They should not be killed deliberately, because the aim is to bring them back to obedience and to stop their evil, not to kill them …

So this means Dawah

In Islamic theology, the purpose of da'wah is to invite people, both Muslims and non-Muslims, to understand the worship of Allah as expressed in the Qur'an and the sunnah of the prophet Muhammad and to inform them about Muhammad.

should be in order first , rather then an execution .

Prophet Muhammad (pbuh) warned of people like the Khuaraij , He said they will read the Quran and preach Islam but it won't go past their throats . This meaning that basically they are wolf's in sheep's clothing . pretending to fight for the cause of Allah and islam but in their hearts they fight for political,personal and worldly gains . He also said they spread evil on the land , and this is true .


Their are some hadith that say "kill them where you find them " ( the Khuaraij) but as far as the hadith being classed as weak or strong I am not clear on.

anyway I wanted to post this so the members who believe Muslims are not standing up to ISIS can now put that to rest ,
because we are . I my self do it though educating young Muslim's about the evils of Khuaraij ideology , Others that i know have gone to fight them and have been killed fighting them .

Obviously the its more than religion , it has to do with war and how religion play's a roll in it .

You see Islam has been interwoven into these wars because of extremist and Khuaraij ideology and other reasons .

Many religions condone killing in times of war and that's the unfortunate reality.

originally posted by: xuenchen
What's next?

Lets not give them any ideas.

Let's see some valid looking white coat attire and I'll more likely believe it's organic islamic actions for the greater peace. Even then, maybe it will only be because they've run out of certain colors ha!

Either way I don't think this will ever *organically* end until they are peering at Israel with their binoculars. Whether that will be in war or collecting their paychecks is anyone's guess.

Anything good on TV tonight?
edit on 2-7-2015 by Atlantican because: (no reason given)