NBC to Donald Trump: You're Fired

posted on Jun, 29 2015 @ 03:24 PM
link
I'm quite sure Mr. Trump was talking about illegal aliens from Mexico, not Mexican immigrants here legally.

I just love it how most of the Trump haters and smack talkers wouldn't even qualify to shine his shoes.

Of course, from what I understand, a presidential candidate must quit or be removed from any media spot because of equal-time laws or something similar for candidates.

Am I wrong about that?

originally posted by: SlapMonkey
Am I wrong about that?

You are correct, otherwise the broadcaster would have to offer equal time to all candidates.

originally posted by: Pladuim
I just love it how most of the Trump haters and smack talkers wouldn't even qualify to shine his shoes.

And I love how his defenders claim to know who he was talking about... even though he just said "Mexico".


originally posted by: Pladuim
I just love it how most of the Trump haters and smack talkers wouldn't even qualify to shine his shoes.

And I love how his defenders claim to know who he was talking about... even though he just said "Mexico".


Everything he said there was the truth. 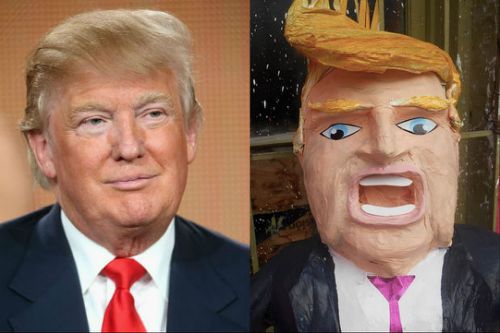 posted on Jun, 29 2015 @ 03:46 PM
link
"I like Mexico. I love the Mexican people. I do business with the Mexican people, but you have people coming through the border that are from all over. And they're bad. They're really bad," he told CNN's Jake Tapper.

"You have people coming in, and I'm not just saying Mexicans, I'm talking about people that are from all over that are killers and rapists and they're coming into this country," he maintained.

No, not really! There are very few in America that are in the position he is in.....I don't like the guy nor will I vote for him but he doesn't care one single bit about us laughing at him...He is laughing right back in his head.


This may come as a shock to you but free speech applies to everyone.

I would not be surprised if he had tried to copyright the phrase.

originally posted by: manuelram16
So does this mean that everybody is OK with an open border on the South ??


What makes you think we have an open border? Apparently you have never been to the border have you?

Trump isn't the kind to get all butt-hurt and sit in the corner crumpled, sucking his thumb...he's the kind to take the lickin' and move forward...many times better off than he was prior.

But he did write to Univision after they cancelled because of his remarks, telling them (more or less) to all go and mulltiply themselves, and that they et al were not welcome on his golf club any more...Bahwah!

Then he added this In a post-script,
"Please congratulate your Mexican Government officials for having made such outstanding trade deals with the United States. However, inform them that should I become President, those days are over. We are bringing jobs back to the U.S. Also, a meaningful border will be immediately created, not the laughingstock that currently exists."
Ooer! ol' comb-over must have some clout every somewhere. However, with that P.S. I can see why there is not much response in the Republican camp, but it would be interesting to know, (sarcasm) why the jobs were farmed out in the first place, and what foot those companies that did farm out kicked with, what they farmed out and who's going to pay to make them change their minds!
FFS! Trump as President, may as well bring in coal tar head Berlusconi, and put disco lights in the White House...and, and...Harvey Keitel!

originally posted by: Chrisfishenstein
a reply to: buster2010

Oh yeah, Trump cares about someone laughing at him for getting fired....He will have to file unemployment now to make ends meet...

and apparently you don't know about the 'killing' the coyotes are making by smuggling children & people into the US, maybe you should read the news once in a while.... and yes!

originally posted by: Pladuim
I'm quite sure Mr. Trump was talking about illegal aliens from Mexico, not Mexican immigrants here legally.

I just love it how most of the Trump haters and smack talkers wouldn't even qualify to shine his shoes.

Not even Trump knows what he is saying half the time which is why he is always in trouble. He seems to have no ability to look beyond the moment. Always making grand promises or threats he can back off. Always blaming his business failures on somebody else. Always taking loans and failing to pay them resulting in lawsuits and bankruptcies. Claiming to be a man who believes in traditional marriage values while some how forgetting his divorces. Calling other people criminals when some of his closest partners have been put in jail for organized crime. Claiming he built his fortune and business when we all know he inherited both from his father. He speaks without thinking. He acts without thinking. And he lies so often he starts to believe what he is saying. He is a Kardashian without the business sense.

posted on Jun, 29 2015 @ 04:35 PM
link
WOW. I wonder which network will pickup the show about failed celebrities pretending to be successful businesspeople now ?

And yet his net worth is over 4 billion. Seems to me he has had a lot of success. He has a lot of life experience in business and politics, which is more than can be said about our current president.