Special needs child versus obstacle course the outcome is heartwarming .

posted on Jun, 28 2015 @ 11:56 PM
link
I love articles like these they renew your faith in other human beings . I'm not sure what disability this young fellow suffered from. My assumption after reading the article is Cerebral Palsy?

When I realized a crowd was staring while my son played .


A couple years ago we took my son Ivan to his very first parade. The parade route was just a couple blocks away from our house. We went because the walk there was easy and if he hated it we could make an easy escape.

One of the churches on the main parade street had set up a free carnival on their front lawn. There were snow cones, face painting stations and a huge inflated obstacle course. There were two entrances to the obstacle course and the idea was two kids would race to see who got to the end first.

It was one of those moments!


It looked like so much fun and Ivan could hear the kids laughing. He wanted to join in so badly, but with his low muscle tone, could he really do an obstacle course?

Well, no, probably not, but I decided to take him through anyway. I figured with lots of assistance from me he could make it. Obviously we wouldn’t be racing any of the other kids — our goal was to just make it to the end.


I’m not going to lie — It was hard! But Ivan was having a great time (and couldn’t really get hurt because everything was so soft) so we just rolled and crawled our way through it. There were places where he had to squeeze between large inflated pillars and other spots where he had to climb over large inflated bolsters. He fell a lot and he was laughing the entire time!

I started to realize we were taking a long time and probably holding up the other kids who wanted to race. I felt bad, but Ivan was having so much fun so I didn’t want to make him move faster or take him out. Then we got to the middle of the course where the whole thing opened up and I saw a huge crowd had gathered to watch us.

My heart sank. I felt awful. “They are all angry and want us to get out,” I thought. I was so focused on Ivan I didn’t notice right away that everyone was actually cheering him on.

I almost started crying as we kept going.

Then we hit the wall. It was an almost vertical wall with footholds and a rope. No way Ivan could do it or that I could carry him up. But at the top of the wall was the slide — the perfect finale to any obstacle course. How could I get Ivan to the slide?

Just then a woman jumped in and climbed the wall and reached out for Ivan’s hands to help me get him up. She pulled and I pushed and Ivan got to the top. The last bit was the slide (again, almost vertical) and down we went!

When he tumbled out onto the grass, he was ecstatic. He did it.

The crowed roared and cheered for him and he looked like he had just won a marathon. It was adorable and moving. It made me realize all over again why I love this town.

Then we had a snow cone and there was a parade. It was wonderful.

I'm sure some of you think, cantankerous old jerk . I will admit I am most the time but when it comes to children I wear my heart on my sleeve . Parents with special needs children suffer through indecision and self-doubt every time they go out in public. You can see it in this ladies thoughts throughout this entire story .

It is refreshing that this boy's mother would go to such links to bring joy into her boys heart . But can you imagine the joy she herself felt from the empathy and compassion this crowd showed ? Keep this in mind when you see, a parent of a special needs child in need of help . Many people will retreat out of discomfort. But people with good souls will reach out and lend a hand . 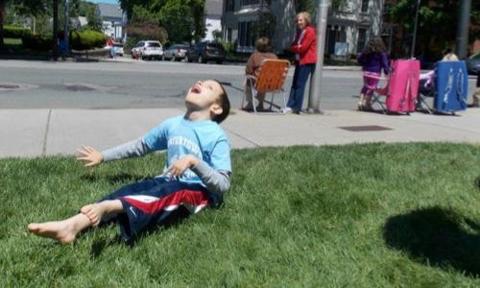 Yep I'm a big softy the story put a tear in my eye and a smile on my face !

Yeah I find it's nice not to concentrate on one side constantly . The link was pretty cool they had several stories that make me proud to be a human being .

"It made me realize all over again why I love this town. "

the whole point was her pointing out she feels she is getting a good community and a good service by living in the town she does but we dont get the name of the town, frustrates me.


tbh i dont think i really cared what town at all until that last line saying its all about her town, then i wanted to know.

anyhow after research into the authors name i think its Watertown, Massachusetts, appreciated closure.
edit on 6/29/15 by pryingopen3rdeye because: (no reason given)

A moment in time which glitters stark against the backdrop of dark chaos and damnation. A beautiful reminder of what it is that we should seek to foster amongst one another, in our towns, cities, and nations. Lovely story Greathouse. Thanks for posting it!

That was very beautiful and heart warming.

Thank you for posting that, I needed a good smile this morning.

originally posted by: TrueBrit
a reply to: Greathouse

A moment in time which glitters stark against the backdrop of dark chaos and damnation. A beautiful reminder of what it is that we should seek to foster amongst one another, in our towns, cities, and nations. Lovely story Greathouse. Thanks for posting it!


Why don't you write for a living? The statement you just delivered was elegant and beautiful .

Thats a very nice thing to say Greathouse, and I appreciate it. But I already have a job, and although it does not pay worth a crap, I like my work. Besides, I enjoy doing some things just for the love of them. It must also be said, that even a hack would be driven to write in such a way, given the subject matter.

Well you're definitely not a hack. Since you're employed it wouldn't hurt to send some editorials in to your newspapers. Who knows you just might get noticed ?

originally posted by: pryingopen3rdeye
a reply to: Greathouse

"It made me realize all over again why I love this town. "

the whole point was her pointing out she feels she is getting a good community and a good service by living in the town she does but we dont get the name of the town, frustrates me.


tbh i dont think i really cared what town at all until that last line saying its all about her town, then i wanted to know.

anyhow after research into the authors name i think its Watertown, Massachusetts, appreciated closure.

Honestly not naming the sickness or the town left me in a bit of a quandary also . After thinking about it for a while I believe the lady wanted to neither draw attention to the disease or the town. It was written to display her thanks for the Spirit and support from the audience only .

If you're out there True Brit there's a opportunity make my rambling thoughts elegant ?

posted on Jun, 29 2015 @ 11:41 AM
link
I read this story yesterday. One never knows what little miracle they might encounter each day.

Thank you for this thread

Greathouse, your comments always strike me as being entirely solid on their own merits. They say what you mean to say, and I never find myself wondering what it is you are talking about, or what it is you mean by what you say. In short, you do not need my help to get your point across, and I have never been one to work to a brief in any case