Something to Remember About Flags in Question

posted on Jun, 28 2015 @ 09:22 PM
link
You may remember a few years back the Office of Homeland Security issued warning far and wide to other agencies about the dangers of returning vets ect.

One of their chief concerns was about folks that flew this flag. 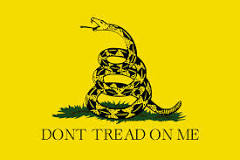 What does this flag, the Gadsden, have in common with the Confederate Battle Flag? Well its a Colonial unity flag representing unity of colonies against central crown authority and crown bureaucracy.

I am saying like some others that the primary reason these flags draw fire from lefty progressives and their mouth pieces is that the flags, in the main, represent union against central authority. The Feds hide their real fears behind negative aspects, in the case of the southern confederacy, associated with these flags.

The Gadsden was jumped on again after it was associated with the Tea Party and then affiliated with all the negative press the party received.

They are coming for it all. They want no division, just a nation of sheep.

That was clever, did you make that up?

Part of central powers thing is keeping and eye on and using symbols. They want to run the symbol business.

That was clever, did you make that up?

I was just thinking about the guns don't kill people, people do, so I did a spin on it. Some one else may have already said it. But if not then I guess I did make it up.

Yea did you notice how much attention is going into have just the right logos/symbols for their running for president in 2016?


Hay I read you on that.

Yea did you notice how much attention is going into have just the right logos/symbols for their running for president in 2016?


No not yet. Interesting you say?

Yes, but you have to look past the right left thing, this is an us them thing.

Yeah and right wing conservatives are a bunch of tyrannical racists that want to deny equal rights to people of color and gay people. /s

you show so much hate.

Don't tread on me.

Who else could be offended by those four simple words other than the progressives?

posted on Jun, 29 2015 @ 01:05 AM
link
As a nation of people striving for natural freedom and human rights that can only be granted by divine authority, we need to take back America's lost dream, the hijacked Constitutional Republic, and our accountable individual liberties. It's time to live free once and for all, or die hard trying. 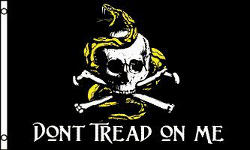 “ The tree of liberty must be refreshed from time to time with the blood of patriots and tyrants. “ -- Thomas Jefferson

posted on Jun, 29 2015 @ 06:40 AM
link
the word FLAG has the word FaG in it, maybe they should ban it and re-name flags to something else then you know so they don't offend anyone... pffftttt.

originally posted by: MohammadsFriend
a reply to: Kali74

you show so much hate.

/s means sarcasm. Progressives, Leftists, Liberals are constantly attacked on this site... non sarcastically, but sure I'm the one with the hate problem.

posted on Jun, 29 2015 @ 10:09 AM
link
I personally love the gadsden the only thing that could make it better is if the snake was rainbow colored and somehow wielding an AK-47 (the AK already being on the flag of Mozambique).