page: 1
61
<<   2  3 >>
log in
join
share:
Kapusta
+41 more
posted on Jun, 27 2015 @ 06:37 PM
link
In 1851, when Scotsman Sir David Brewster invented a photographic device called the Lenticular Stereoscope, the way people saw the world changed forever. After presenting it to Queen Victoria at the Great Exhibition in London, Victorians went crazy for the new machine. Photographers were sent far and wide to record famous sights and events in stereo. “See the world from your parlour!” was just one of the many advertising slogans used to promote the fabulous new medium to knowledge thirsty Victorians. These incredible 3D images are just a fraction of the tens of thousands produced.

A stereoscope[1] is a device for viewing a stereoscopic pair of separate images, depicting left-eye and right-eye views of the same scene, as a single three-dimensional image.

A typical stereoscope provides each eye with a lens that makes the image seen through it appear larger and more distant and usually also shifts its apparent horizontal position, so that for a person with normal binocular depth perception the edges of the two images seemingly fuse into one "stereo window". In current practice, the images are prepared so that the scene appears to be beyond this virtual window, through which objects are sometimes allowed to protrude, but this was not always the custom. A divider or other view-limiting feature is usually provided to prevent each eye from being distracted by also seeing the image intended for the other eye.


NOTE: I couldn't find any info on who exactly the people were and what role they played in the photo .

Maybe someone with more knowledge on Japanese culture can give us more of an insight on who these people were and what role they played in this frozen piece of history.

I hope you enjoy these as much as i did .

WoW! I know there's a lot of earthquakes in Japan, but how'd they take ALL those pictures during earthquakes!

Awesome pictures, thanks for posting!

Maybe someone with more knowledge on Japanese culture can give us more of an insight on who these people were and what role they played in this frozen piece of history.

posted on Jun, 27 2015 @ 07:02 PM
link
a reply to: Kapusta
Now that is some wicked cool imagery, the only thing missing would be some samurai posing for pictures in full gear, swords and all.

Very cool stuff either way, especially given the time period it was taken in. Thinking on it, there should be some more Stereoscope pictures from that time period from other places such as Europe and the states as well, if there are some of Japan. I think I remember seeing some long ago of Victorian England and the states and other places, but does not really jog the memory were and when.

That third picture looks like one of those shrines, even got a liondog statue on there, and and kids posing, but your going to have to ask others more familiar with Japan on were and why. And the other pictures speak for themselves as well, its all pretty cool stuff.

So where can I get a Lenticular Stereoscope? Think Amazon might have one? : )

So hey! I was just guessing!
Not bad.

I keep scrolling through them

I saw this on reddit. I find joy in photos. I wish, and imagine I was born in the 1800's in Japan. Or earlier would have been cool. Amazing visuals. I want to be a samurai.

(I included a link but am now removing it. All it did was take you to vitamins. How bizarre. )

posted on Jun, 27 2015 @ 07:48 PM
link
Is the guy in the far left of the first photo or a ghost? He looks transparent. Look at how you can see the (flag, backdrop) and other things right through him. At last proof of Ninja invisibility?
edit on 6/27/15 by proob4 because: (no reason given)

WoW! I know there's a lot of earthquakes in Japan, but how'd they take ALL those pictures during earthquakes!

Every time I think about that I start giggling. Priceless!

I too wish I could try living in that time. 2015 kinda sucks

It messes with my eyes but they're really cool. Good find!

originally posted by: galadofwarthethird
a reply to: Kapusta
Now that is some wicked cool imagery, the only thing missing would be some samurai posing for pictures in full gear, swords and all. 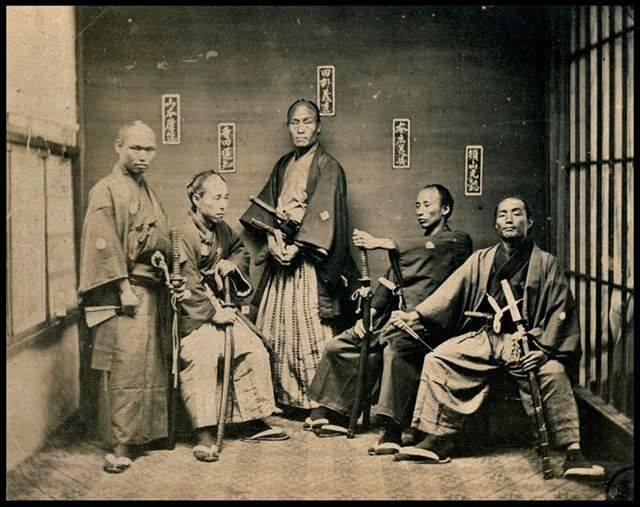 Hey thanks for posting that , super cool pics .

posted on Jun, 28 2015 @ 12:07 AM
link
It would really be interesting to see if we could find out where these pictures were taken and if those places still exist.

Best 3D individual photos on a flat screen, how was that done and why haven't all cameras used this technique? And how was the colour added??? This is a fine thread. And yes, the guy on the far left in the first photo is a ghost, an ancestor of the guy in front of him no doubt (Boo!).