News agendas, they're controlling your mind and you don't even know it.

These are all current headlines promoted by the media. Exaggerated, embellished, repeatedly reported.
They’re blown out of proportion.
They’re telling YOU what to think about, what to discuss, what to get emotional about – what opinions to form.


The media is a fully controlled line of communication from TPTB down to the rat race. It’s a form of control of the highest degree. It’s a tiny manipulated keyhole of sight into what is going on in the world. They choose what we see and therefore what we think is important/news.

The news is a set agenda, controlled and cherry picked to push us in a certain direction. IT IS NOT REAL LIFE!!!!!!!

They will conquer us. 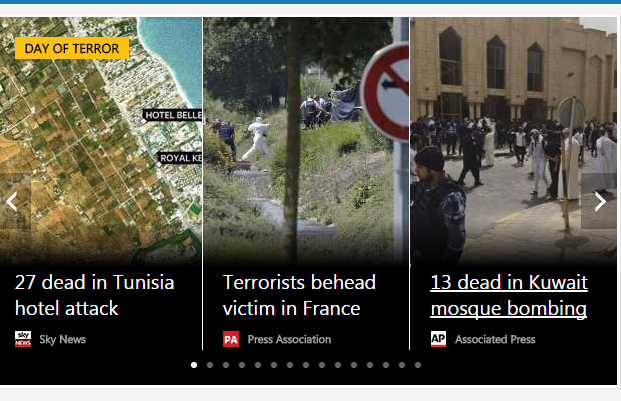 originally posted by: and14263
A typical snippet from today's msn homepage:

Yes is been going for a while, is the targeting propaganda to steer public opinion, actually this is happening since the 70s when the news media started to be controlled by monopolies, I remember posting a list of who owns what when it came to the news outlet in the nation we also have multinationals owning some of the popular US stations this days.

So much manipulation in the media that we get ignorant to the real issues that effect us in ways we cant see!

I grew up to believe that the news was a direct source of honest information! any concerns in the world and the news was there as a voice of the people to ask and push the questions we need to hear, but as my eyes have been opened its so clear to see that the media is 100% manipulated by higher powers!

Perhaps you are right about media manipulation...

I do know that news organizations are in a ratings race for market share. They full well know what stories garner interest.

"If it bleeds, it leads"

imo it's more about money than social/cultural manipulation; a combination of both perhaps....

originally posted by: olaru12
a reply to: and14263
...
imo it's more about money than social/cultural manipulation; a combination of both perhaps.... .

A very valid point of course.

Keep the people focus on what the government wants and away on what is affecting everyday lives.

Public opinion control, is easier to call a conspiracy anything that the government deems a danger to the status quo so people get confused about what they hear outside the main news outlet.

Because they are events that will affect international policy. In a liberal democracy, voters need facts to assess the policies implemented by their representatives. Each of these acts are an act of war which may eventually involve action on the part of the government... obviously. Why do you ask?

Why wont they talk about added chemicals in our water supply?

It is not news because it has been going on for decades. It only becomes news if there is a sudden, accidental release of chemicals, if tests reveal higher levels of toxins than are legally permitted, or if activists move to change the situation. If you want the chemicals in your water supply to become news, it's up to you to make it news.

Why wont they talk about additives, preservatives and growth hormones in our food?

They do; it's just a case, once again, of it not being news. Unless something changes, you have to do your own research.

Why wont they talk about Chem trials polluting the air with unidentified chemicals?

Because chemtrails don't even exist.

Why wont they talk about the fact that cancer is at an all time high in young people as well as the elderly?

Whatever is needed the sway the masses.

The Romans used a coliseum, our violent entertainment is now the news.

Okay, let's follow the money. The 'mainstream media' in America are largely owned by six big companies. They're not in business for their health. They're in business to make money. How do they make it? These are publicly-owned companies, their accounts and balance sheets are public documents. We know they make their money principally through advertising and related marketing activities.

Who gets the most money? Advertisers want their message to reach the widest possible audience. So they try to put their ads in the media that have the most viewers, readers, listeners, followers, etc. Of course, the media owners know this, so advertising rates vary in line with audience size. The most expensive commercial spot on US TV used to be (and maybe still is) the half-time slot at the Super Bowl, because it's supposed to have (or have had) the biggest viewership of all.

What does this mean? It means that the most successful and profitable media properties are the most popular ones.

So who, then, is dominating whom?

Having just returned from a 2 week holiday in the Balaerics, I agree with you entirely.

I purposely did not take any devices with me as I wanted 2 weeks away from everything, including phone calls and texts. Therefore, I did not have access to any alternative media outlets, but did have access to the U.K's MSM via the television in my hotel room.

Every time I switched it to the news channels, it was nothing but propaganda being spewed by the presenters and the content was nothing but doom and gloom. There were constant reminders of those nasty terrorists in the M.E, the cost to the U.K citizens if Greece was to pull out of the Eurozone (10% of people's savings?), racist shootings in the U.S with gun control very much back on the agenda and more austerity measures being inflicted on the most deserving in society ( the poor).

So yes, I totally agree with what you are saying and whilst I enjoyed my holiday very much, I am glad to be home and have a break from the propaganda.

That is indeed the question.

There IS an agenda, and someone does call the shots, and wants certain stories (and certain types of stories) run. To what end does it serve, why some over others?

I stopped watching the news except for the occasional local news. I don't care what pundits or reporters think, and I don't care about their opinions. I want the facts, so I can form my own opinions. Sometimes, one needs to read between the lines, and one must read as many sources as possible. Too many times it appears that people ONLY get their news from Fox, or MSNBC, or Breitbart, etc, and their opinions and posts reflect those things.

I got sick and tired of the Caitlyn Jenner crap. That's all I saw on Twitter for days from every single news organization while so many other things were happening. Congrats to he/she but I just got sick of it being constantly in my face.

When I used to watch World News in the evening: THAT was the Number one story of the night/day when there are so many other (IMO more important) things going on??? Give me a freakin' break.

Same reason 24/7 news sucks: They HAVE to constantly fill the airwaves with *something* so they run things into the ground and create fake controversies. I've noticed that for the past few days, all the Tweets from Anderson Cooper are all about the NY escape, but there's nothing NEW there: it's showing flora in the woods, and explaining how a dog smells, and a bunch of other BS.

You mentioned police brutality and corruption in your OP; I personally focus on that because it's a problem that truly concerns me, for our country's sake. I don't let the media control what I think, but I do like to become aware.

But every journalist has what *he or she* thinks is important, and they all have bosses who dictate what should be covered and run.

This is why true journalism is, in many ways, dying. That's what I wanted to bring back into media: ethics and integrity, since it's becoming so lost.

I'm glad you find your assessment of the situation obvious. It stretches further than political influence though.

Perhaps that is a question for Rupert Murdoch?

That is one of the main problems:

Do we show people what they *want* to see, or do we do our jobs as journalists and seek to inform our citizenry?

Media adapt. Viewership then begins to dictate content (to a degree).

Indeed, journalism, in large part, has taken a backseat to the business model (hence money).