Egg Production Is Back, But Lost A Hen.

posted on Jun, 25 2015 @ 10:03 AM
link
So for the past few months I've been having a serious issue with my chickens, in that they were destroying and eating a lot of their eggs.

This is not unheard of behavior and can have many different causes, and solutions to it.

Some causes can be lack of the proper protein in their diet, or enough calcium (they eat the egg shells for that). Or it can be a behavior issue.

Some of the solutions range from offering the chickens distractions like golf balls or wooden fake eggs to peck at. Tried that, didn't work. They just buried the balls and fake eggs! You also have filling an egg with things like mustard, hot sauce (funny since chickens do not have taste buds), or dish soap.
Tried those, and none of them worked either.

It can also be the behavior of just one hen, and if you can isolate them from the flock, your problem goes away, but you have to catch them in the act, something I had a hard time doing, and it also looked like it was 3 or more possibly doing this.

Finally, almost a week ago, I had been going out to the hen house about every 30 minutes, to try and get to any eggs that had been laid before they could be destroyed. That in itself is bad because it's taking me away from other things that must be done. I would have to stand there and watch/wait for a hen to finish laying and quickly grab the egg (a very "sticky" thing to so, heh, as the eggs that pop out right away are very sticky). Lots of my time being taken up.
Too many times I was too late.

But then and idea hit me: the hens sometimes lay their eggs out in the dirt of the run. Those eggs NEVER get touched by them. They always survive. Only the ones that get laid in the hen house get destroyed. The hen house is only used by them to lay eggs too. They do not use it for anything else. For shade, they go under the hen house. At night, they get up on their roost that is in the chicken run to sleep. Even during the cold of the winter, that's what they did, and ignored the nice warm hen house that I had a heat lamp hooked up.

So I shooed all the hens out of the hen house, then closed and barred the door into it, not letting them in it this past week.

It worked. Not one egg has been destroyed by them.

Here's 3 days worth of eggs: 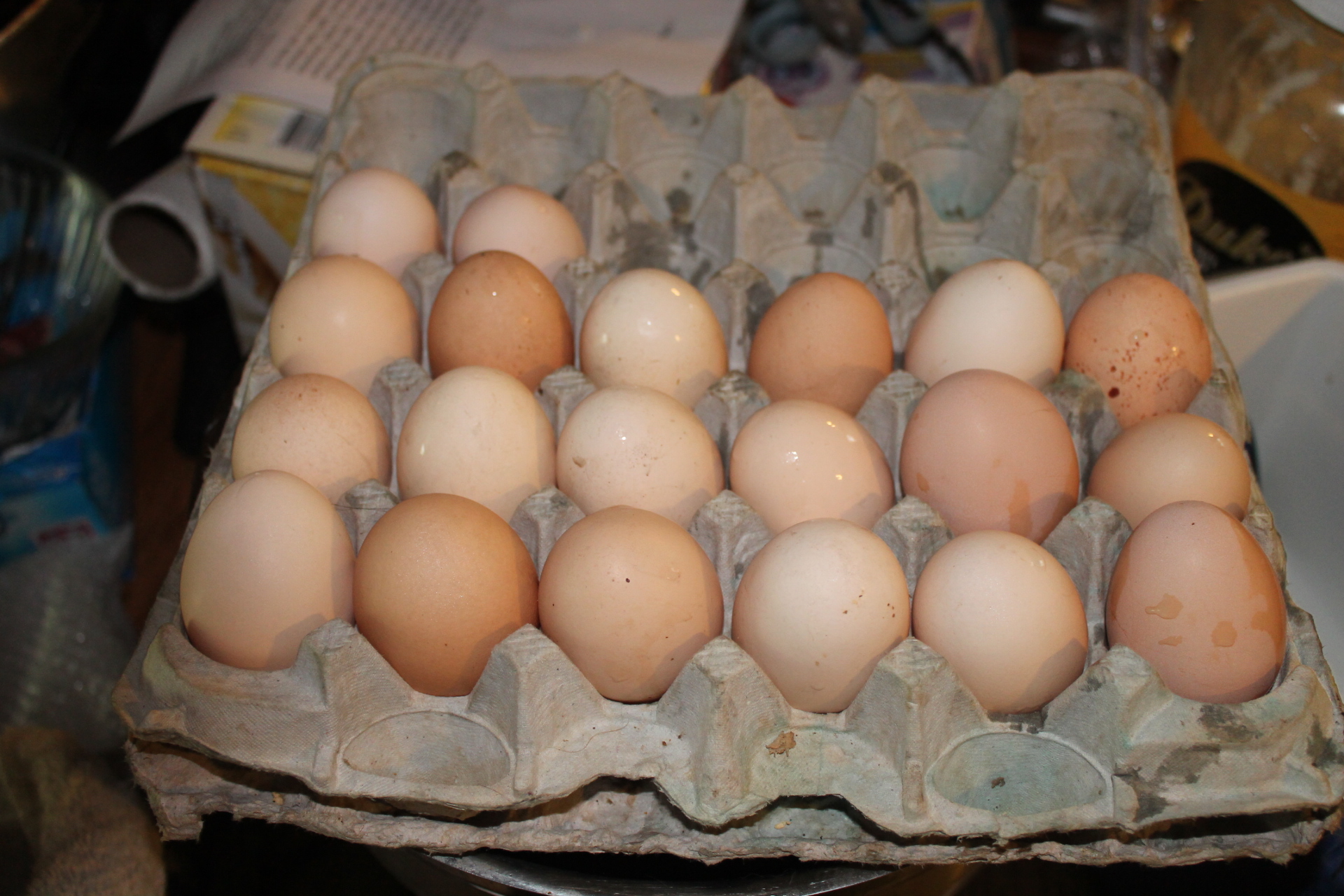 Also, I lost a hen the other day. She had somehow broken her neck on a root under the hen house. Still not sure how she did it, but I've removed the root so it can't happen to another. Hate loosing one of my girls like that.

With the hen house, maybe it was the heat light? not he house.

Do you feed your Hen's "Grit" (Crushed oyster Shell). It makes the eggs shells stronger and the girls cant peck them open. I have three girls myself and had a similar issue with them eating the eggs but when i started giving them "Grit" it seems to solve the problem by making the shells a lot stronger.

Not really, because they didn't want to use it before the heat lamp, and the lamp only raised the temp by about 10 degrees or so (can't shut the hen house up because of the humidity that will cause, wet cold will give the chickens frostbite quicker than dry cold, and a hen house with little to no ventilation during the winter is a bad thing.).

They don't have a proper roost in it is what I'm thinking. What I really want to do is get a old, small wooden shed that I can walk into and set that up for them as a hen house. Then I can put in plenty of roosts for them, and they love roosting quite a bit.

Yes. I give them crushed oyster shells which they gobble down.

The egg shells are tough. But my girls are big and heavy (Rhode Island Reds and Cinnamon Queens). 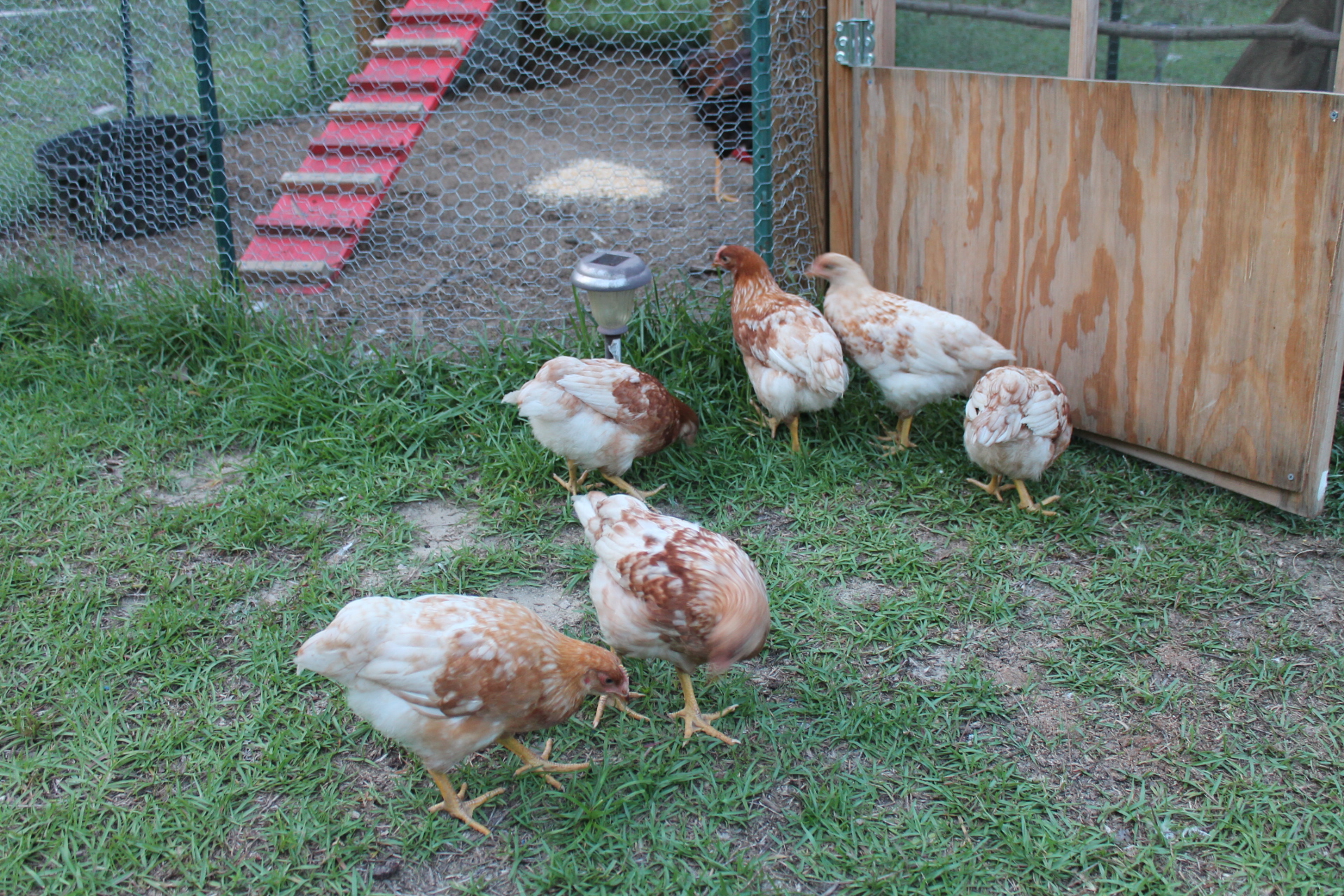 Here is Nugget, my rooster. He's a Golden Lace Wyandotte 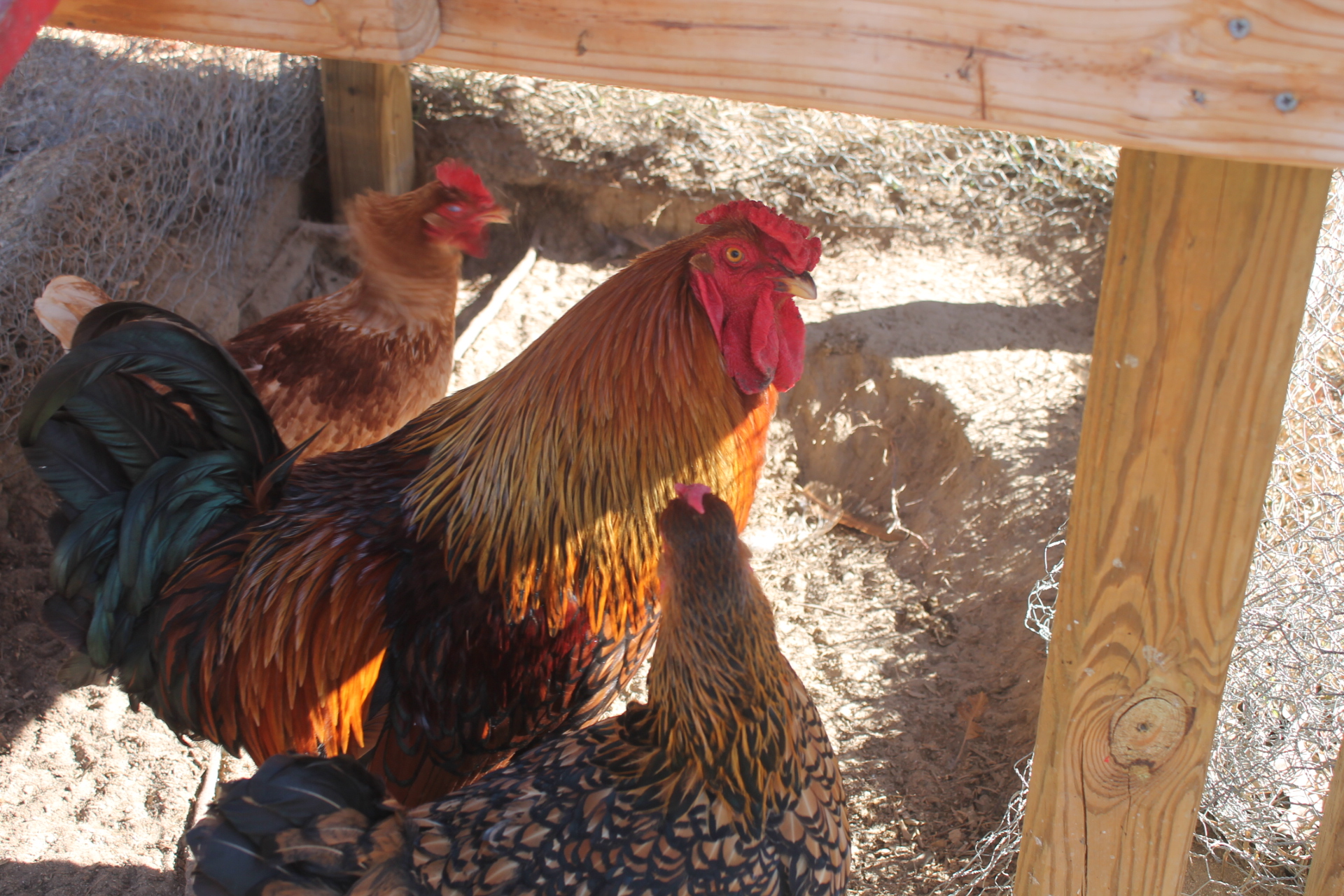 I have three Reds as well 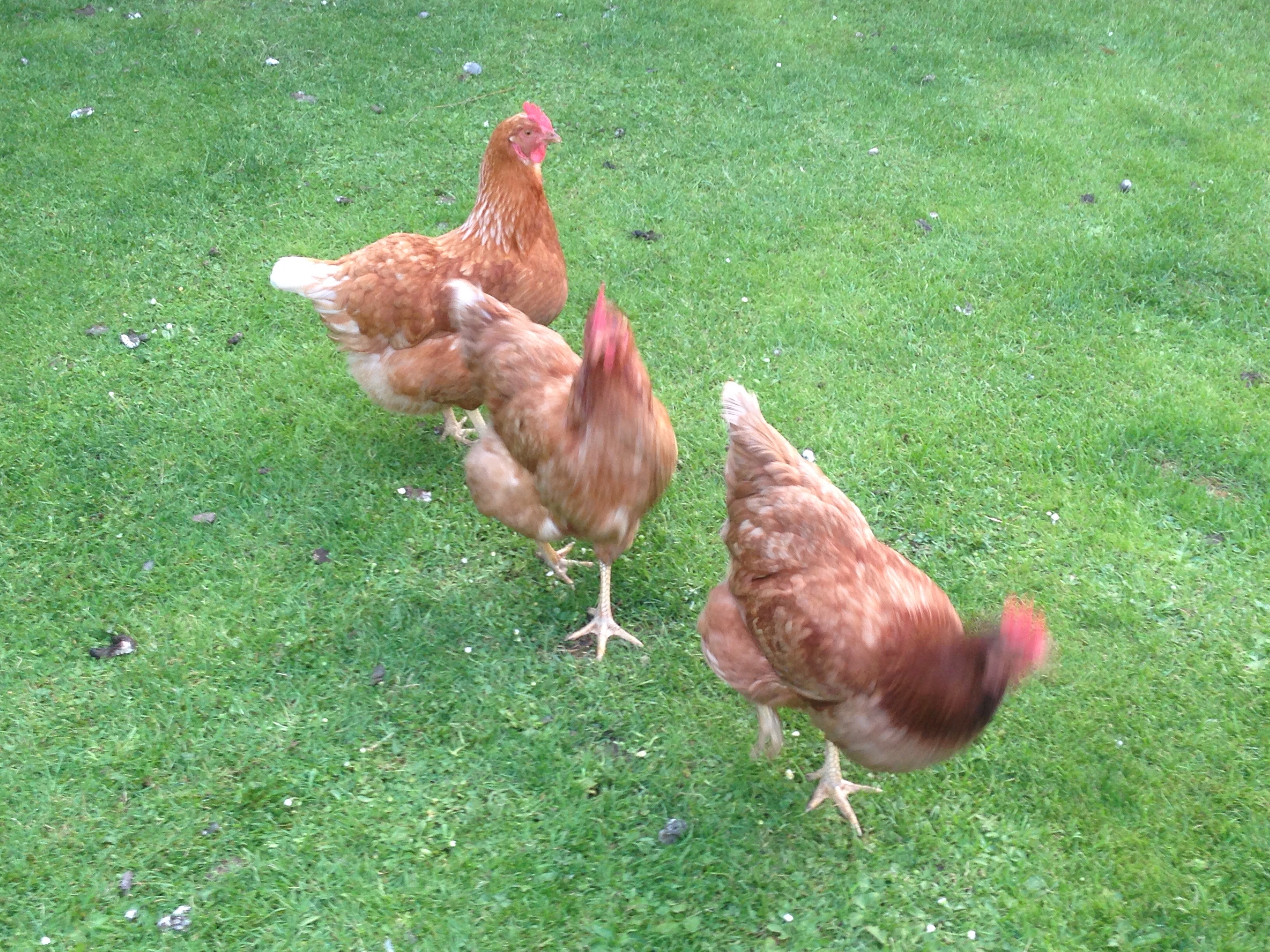 Have you tried any of the following;

#1. This is the most common used method among backyard chickeners. Take a thumbtack or a small nail, and poke a small hole in each end of the egg. Then blow on one end, until the egg is empty. Fill up the egg with mustard, or dish-soap. Then place it in the nesting box. Chickens hate the taste of mustard, and once they peck into that, they may not be trying it again. It may take a couple tries using this method, just in case it doesn’t work the first time.

#2. Place golf balls, or some sort of false egg, in the nesting box. When using this method, make sure you gather the eggs just after they’re laid, so that you can further discourage egg eating. After a while, your hens will get tired of pecking at plastic and getting a sore beak, and hopefully the habit will fade.

#3. Give your chickens more protein. Yes, it may be as simple as that. Eggs are high in protein, and some chickens, when they are not getting enough, will go as far as eating eggs! Some things to give high in protein are fishmeal, and cat food. You can also try giving them some game-bird feed; it’s higher in protein than regular chicken food. Also boiled, or scrambled eggs. No, they won’t associate it with raw egg!

#4. Hang ‘curtains’ around the nesting box to make it dark. The egg eaters won’t be able to peck at the eggs if they can’t see them!

#5. Take all straw or nesting material out of the nesting box. This way, the hen will peck at the egg and it will roll away from her. Although it’s a rather odd idea, it’s had success with many chickens! It’s not easy for a hen to break through an eggshell.

#6. Pinless peepers. These are a sort of ‘blinder’ that prevents chickens from pecking at each other. It makes it so that they cannot see in front of themselves, only off to the sides. However this can also be used to break egg eaters. It works in a similar way as darkening the nesting box- the hens won’t be able to peck straight at the egg. Leave these on awhile and the habit will probably be broken.

BTW - I'm also a member over at Backyard Chickens.

I hope you find something that works soon......

My girls don't have a protein problem now as when my back door is open, they come into the house and make a beeline for the dogs dinner (three dogs) which they bully the poor mutts out of the way for

Try giving them some protein, either cat food (which my dogs eat, as they hate dog food) and scrambled eggs.

I have been thinking of changing it, so this might be my chance to do so.

posted on Jun, 25 2015 @ 11:22 AM
link
Figuring out why might not be so easy. Is there some change that you did before this started happening? Something new in the henhouse? I am sure there is something.

So we get to enjoy having eggs for breakfast but chickens aren't allowed to have them for breakfast? How disappointing.

Nope. Because their eggs are mine because of the feed I pay for. Hehehehe.

Sort of like if you worked at a butcher's place. You don't take his meat home....unless you paid for it.

At least that's how I look at it!

This may sound a bit weird but have you considered using a trail cam to catch the egg eater? That will save you time running back and forth trying to catch whoever is doing it. Also, you could use it for your boyscout stuff.

Except I don't have the extra money laying around to blow right now. But I will keep it in mind the next time I have some.

love that brown color egg, in stores they are fluorescent white

Egg color all depends on the type of chicken. It isn't an indication of the egg's goodness. Most of the store eggs are produced by White Leghorn chickens.

As with the OP, my Rhode Island Reds lay brown eggs.

I have had a similar problem. Increasing the protein in their diet worked for me, as well as getting a couple of ceramic eggs that look REALLY close to their own eggs. (it also encouraged them to use more of the nesting boxes).

That said though, we try and check the henhouse for eggs 3 times a day, morning, noon, and early evening (coincides with checking on the horse's and rabbits' water). Sometimes more often if we're out there.

I heard from a guy that works at a store that sells chicks that you can tell egg color by the color of the spots on the chicken's ears. The discussion came up when he was showing my brother, sister in law, and I some chickens called Easter egg chickens. They lay colored eggs. Most of my friend's chickens have brown ears and lay brown eggs, so I guess it's true.
You'll find more information on Easter egg chickens here.