We currently live in material hell.
This is how demons can operate around us.
We have been confined to a low level prison. The earth is indeed a prison planet for sinners.

Now this is when things get interesting. If you are not born again you will face spiritual death and you will not ascend but will be captured by demons and will descend into Spiritual hell which is way more vivid when it comes to pain then what we experience in material hell.

They can disguise themselves with technology that allows them to look human. They are not your friends.

They will hide from you. They will play games with your head via telepathy.

Aliens almost in every sense of the word act and operate like Demons.

All aliens are very technologically advanced and most consider science and technology as their God.

Aliens have deadly intentions and in my experience with them they are not trustworthy.

Aliens help in the deception demons push out. I struggle to speak good things about them since I've known of them for years and they haven't done anything good around me.

Exposing more about myself:

My family is apart of Free Masonry.

Grrr can be found on twitter. Many insider people use the term on there.

Aliens, spirits, and secret societies watch me all the time.

I have street signs that point to the location I activated Christ within. I will disclose these signs when I am ready.

posted on Jun, 25 2015 @ 02:29 AM
link
a reply to: MorpheusNeo123
so the aliens are working with the demons? and you have street signs proving this? Hold on, let me grab my popcorn and glasses I cant miss this.

posted on Jun, 25 2015 @ 02:31 AM
link
Okay, dude, this is getting stupid. Three threads (in the same, wrong forum), on the exsct same borderline schizophrenic sounding topic, in a matter of minutes? This is not how things are done here. Stop.

posted on Jun, 25 2015 @ 02:41 AM
link
a reply to: admirethedistance The forum is called general conspiracies. I think this post fits well in this forum. Rehashed topic I think not. Try reading all 3 parts why don't you.

originally posted by: MorpheusNeo123
a reply to: admirethedistance The forum is called general conspiracies. I think this post fits well in this forum. Rehashed topic I think not. Try reading all 3 parts why don't you.


I have read all 3, and they read just like countless other threads from countless other holier-than-thou types claiming God speaks to them that have come before you. No offense, but that's how I see it. Seeing that you're new, I suggest you look over the various forums again, as this is not the proper place for this.

posted on Jun, 25 2015 @ 02:45 AM
link
a reply to: admirethedistance Yes this topic is schizophrenic because you rather discuss how many points Lebron James scored in the NBA finals. Yes I understand your ambitions.

Just read all three.
Dude sorry but it reads like every other prophet from god thread that often comes to ATS.
All in the past have obvious mental health issues so why should we take this all as "gospel"? what makes you different?.

Oh can I be a Deception agent? It sounds cool? do I get a badge and gun?.

originally posted by: MorpheusNeo123
a reply to: admirethedistance Yes this topic is schizophrenic because you rather discuss how many points Lebron James scored in the NBA finals. Yes I understand your ambitions.


I could give a rat's ass about Lebron James, the NBA, or sports in general, but hey, thanks for making assumptions about me!

But you have claimed to get this info from the creator and you have shown us all the info also abbled on about religion and such....It reads like you think you are.

Oh can I be a Deception agent? It sounds cool? do I get a badge and gun?.


You'll probably want to carry your own gun. The ones they issue are worthless. 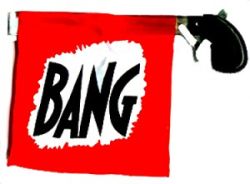 
In your 2nd thread you say the devil makes us bow down to women...because we bend the knee? dude we all bend the knee in one way because we want to get laid not the devil just basic biology.
Also why is it always the freemasons? Many on here have shown us what they actually are and they are just a bunch of dudes wanting a night out with the lads and give a bit back to society.

You really think you are The One huh? I bet you're just some dimwitted teenager who finally watched The Matrix.
edit on 25-6-2015 by WolfBytes because: (no reason given)

originally posted by: MorpheusNeo123
a reply to: boymonkey74 Goes to show how much you know. I am not a prophet and never will be.