Samsung wants to put more TVs on the road. Trying to pass a semi-truck on a two-way, one-lane road can easily lead to a deadly head-on collision, since it's almost impossible to see around a semi without inching out into the opposite lane. Samsung's Safety Truck would make drivers safer by allowing them to see past tall trucks through a television attached to the back of the semi.
The Safety Truck comes equipped with a front-view camera that provides a peek at what's ahead for any driver stuck idling behind the truck. A wall of four television monitors hung on the back of the semi connects to a wireless camera attached to the front. The live feed from the camera shows what the driver of the truck sees, allowing drivers behind to make decisions about whether or not it's safe to pass the slower semi, both during the day and at night. 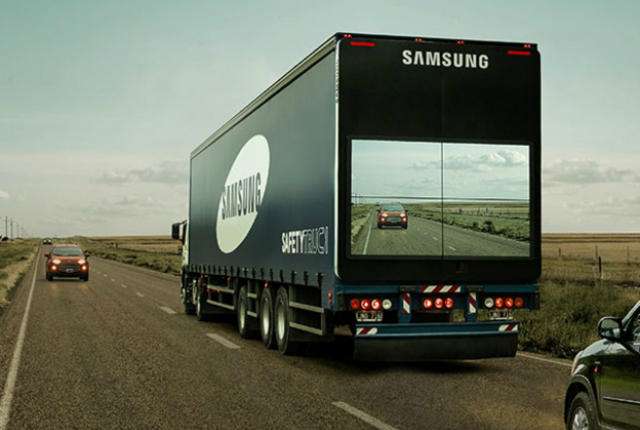 Interesting idea by Samsung. It would certainly sell more TV's. I could see this being a useful technology, but I can't help but wonder if the distraction of looking at it might also cause as many accidents as it prevents. What do you think? Dangerous distraction or Safety Innovation?
edit on 6/23/2015 by Klassified because: wtf?
edit on 6/23/2015 by Klassified because: (no reason given)

I think Samsung would be concerned about the potential for causing more wrecks than actually saving lives. It would ruin their reputation. People are inundated with flashies day in and day out. I'm not sure another source of flashy would distract most drivers all too much.

A concern I have is for thieves and vandalists. I don't think those screens would come all too cheap. It would be cool to see truckers hack their teles at extended truck stops and gather around for ghetto drive in theaters made of close together semi's extended back screens.

originally posted by: pl3bscheese
It would be cool to see truckers hack their teles at extended truck stops and gather around for ghetto drive in theaters made of close together semi's extended back screens.

I can only imagine the family-friendly flicks they would be watching.

posted on Jun, 23 2015 @ 09:51 AM
link
I saw this on the news a couple days ago. I think it is wonderful and hope this continues to grow in the trucking industry.

originally posted by: ErosA433
yeah massive repost, right above the post about the same topic, you get... zero points sir


No need to be snarky.

I see why I didn't find it. Didn't think to look for a title like that.

posted on Jun, 23 2015 @ 10:16 AM
link
Maybe they can start showing movies on the back too. Then you wont feel so upset being stuck behind a slow truck.