Pallasites - The cores of exploded planets.

Since meteorites are a kind of specialty of mine, I thought it would be cool to pick one particular type off the classification list, and go into
a little detail. 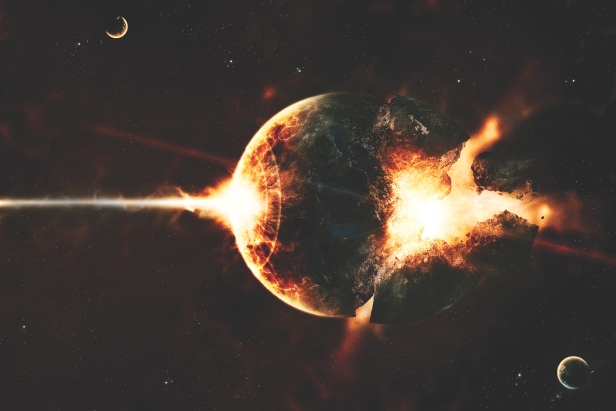 We speculate what lies beneath our feet, and wonder what is really down there. Science has only been able to penetrate a few tens of miles into our Earth, and we have barely scratched the surface of our crust. We can only wonder what our mantle and core are really made from, and what layers there are to be seen through to the center of the Earth. 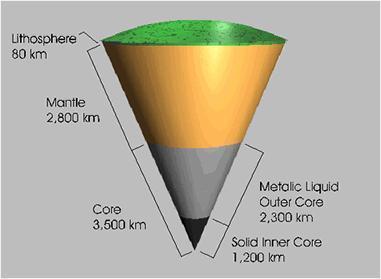 Presently, it is impossible to get to those levels, and it might never be feasable. But... have you ever wondered what it looks like?

In our museam's, educational organizations and even homes, we have some extraordinary evidence of what the boundary of our Mantle and Core might be like, by studying the remains of early planets that exploded.

Science kind of had it right, long before the association, so it is kind of a verified proof.

Pallasites are so rare, less than 2% of all meteorites that have been seen to fall, or found on the Earth are of this class. They are Iron cores with Olivine crystals embedded in their matrix and are beautiful to look at.Science has determined that Pallasites are the Mantle/Core boundary of early planets that exploded, possibly by an impact with another solar system body, and these events happened at least 4.2 billion years ago, when our solar system was being born.

It could be the result of a collision between a comet and a smaller planetoid, or 2 dwarf planets colliding in the asteroid belt and many other explosive possibilities.

One of most beautiful of the pallasites: Esquel. 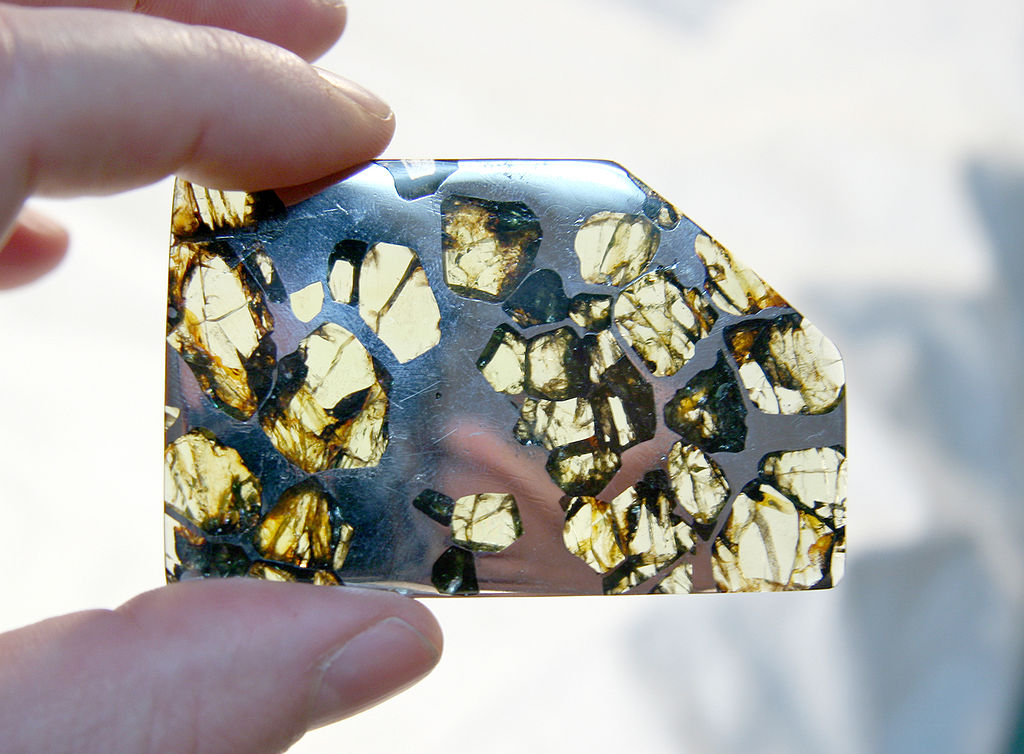 Esquel, in which I have a 5g piece of, is probably the most valuable of Pallasites. Take a look at this beauty...

Pallasites are not common; they compose only 1.8% of all known meteorites. It has been proposed that pallasites represents the interface between the stone mantle and the metal core of differentiated asteroids.

In 1951 a farmer uncovered a meteorite in an unknown location near Esquel while digging a hole for a water tank. The meteorite was purchased from the finders and taken to the United States in 1992 by meteorite expert Robert Haag.
The Esquel meteorite is known world-wide among collectors and the meteoritical scientific community Classification and composition[edit]
Esquel is a main group pallasite (MGP). 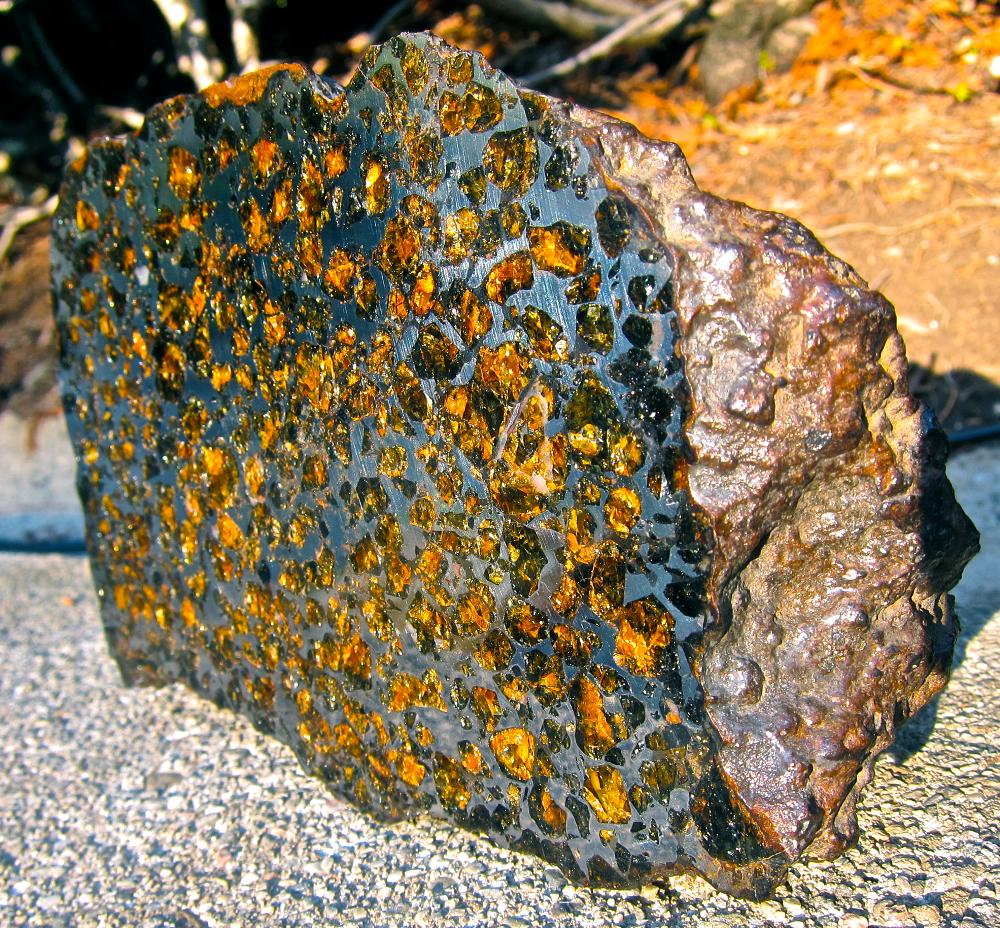 Brahin, a beauty as well.

Brahin is a Main Group pallasite, with angular shaped olivine embedded in an iron-nickel matrix. Olivine crystals represent about 37% of the weight of the meteorite. Minor constituents are schreibersite, troilite, chromite, pyroxenes, and phosphates (whitlockite, stanfieldite, farringtonite, and merrillite)

The Brahin Meteorite fell in 1807 near a village in the district of Bragin, Russia. Two masses, 80 and 20kg were found, althought over another 1000kg have been found up until recently. Brahin is classified as a Pallasite, and consists of centimeter-sized olivine crystals of peridot quality embedded in an iron-nickel matrix. The area was contaminated in 1986 during the Chernobyl disaster and falls now in the Periodic Control Zone. As such, brahin is becoming increasingly hard to aquire as fresh samples.

I have a 1kg chunk I purchased from a meteorite dealer in Russia, over 10 years ago. Here are some pictures of my prized Pallasite: 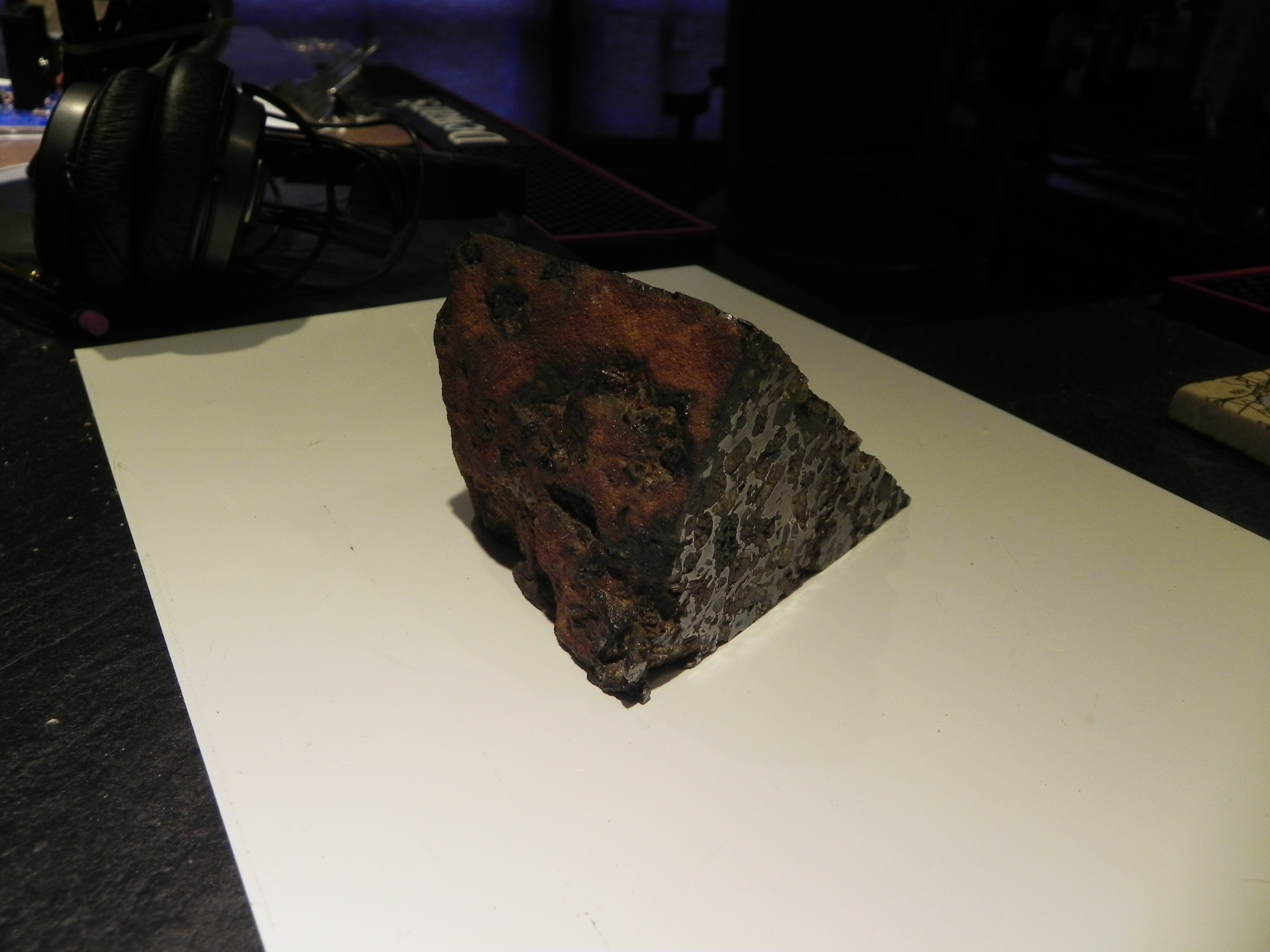 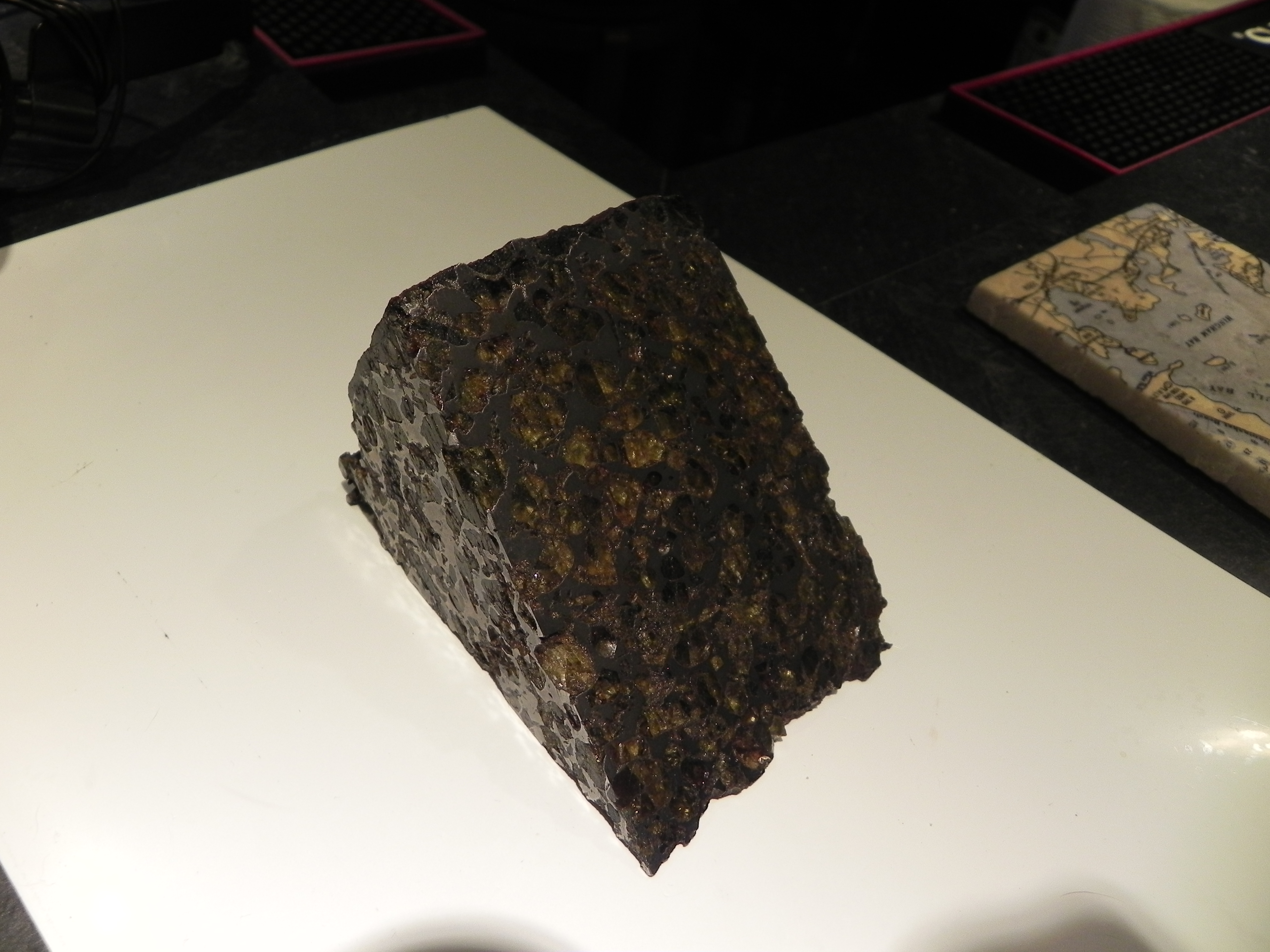 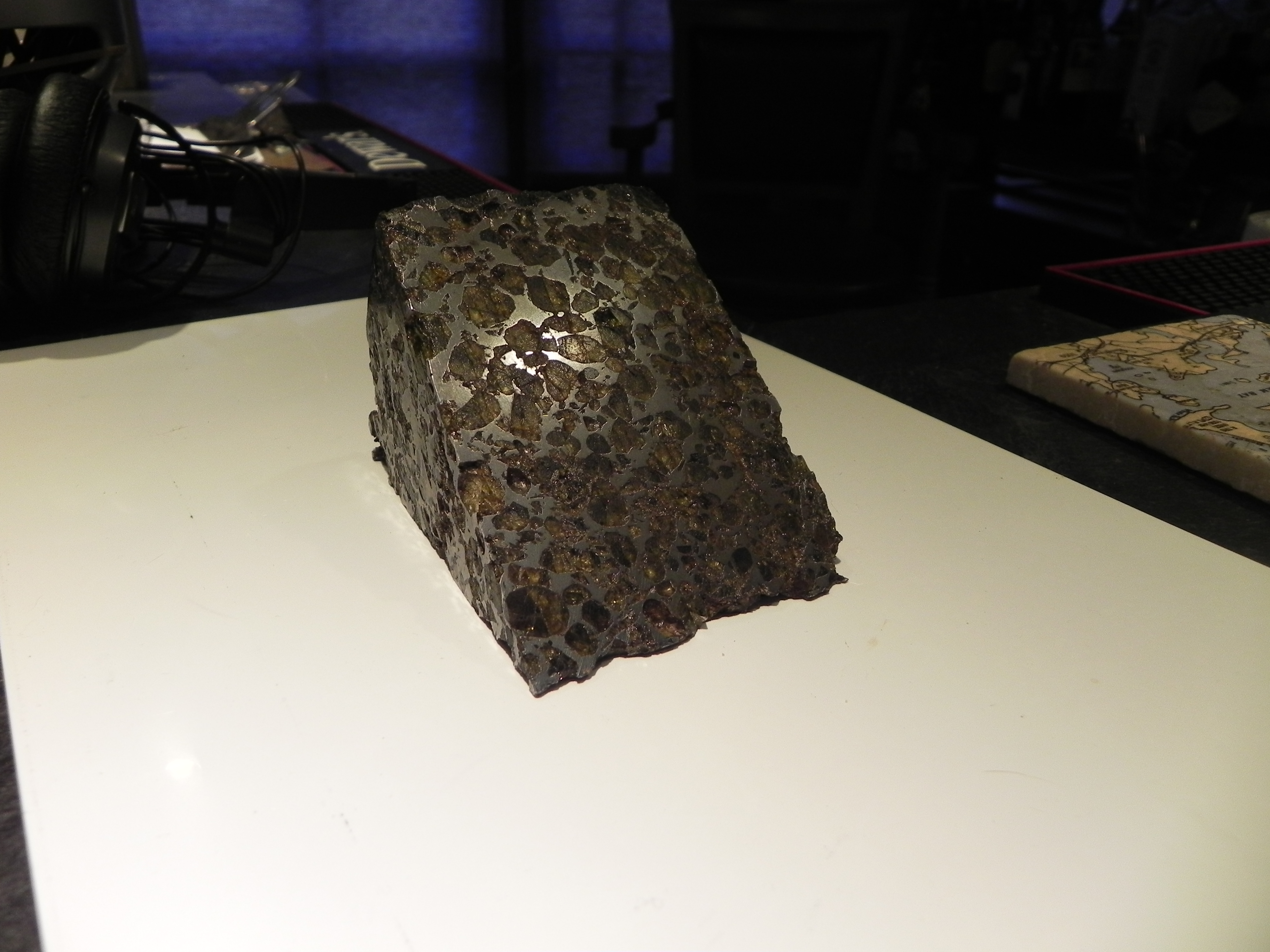 The best of Brahin, is the first one taken by Steve Jurvetson, who was able to take a remarkable picture of a 3kg sliced fragment.


Here is a guy that found the equivalent of winning the lottery: 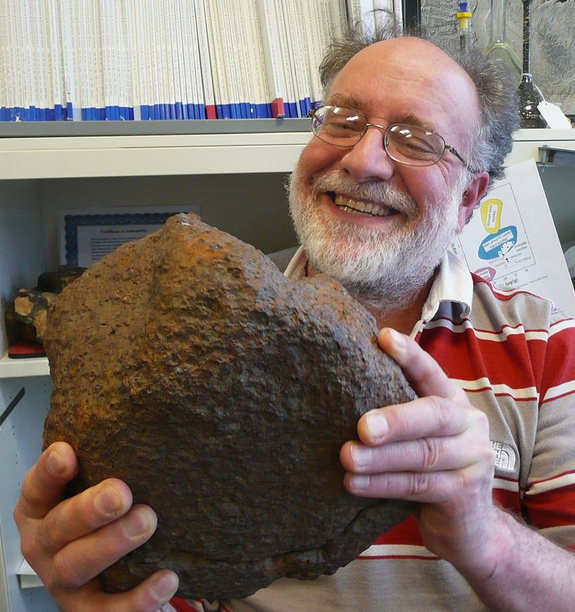 Rock Found by Missouri Farmer Is Rare Meteorite
In 2006, a farmer found a meteorite buried in a hillside in the Missouri town of Conception Junction (population 202). But only now has the true value of the space rock discovery come to light. Geochemist Randy Korotev of Washington University in St. Louis holds the meteorite he helped analyze to identify its parent body. The rock was found to be a rare pallasite meteorite.
Credit: DAVE GHEESLING

He performed Uranium and Plutonium isotope analysis and fission track aging (like carbon dating) establishes the date of its last violent event and expulsion as 4.26 – 4.20 billion years ago: Solar System Research, 2001. His work also shows that it cooled very slowly (5 degrees per million years) and the pallasite originated deep from within the source planet:( Physics of the Earth and Planetary Interiors, October 1997.)

Another well known Pallasite, Brenhan, was found in Brenham, Kansas in 1890 and produced the Haviland Crater. 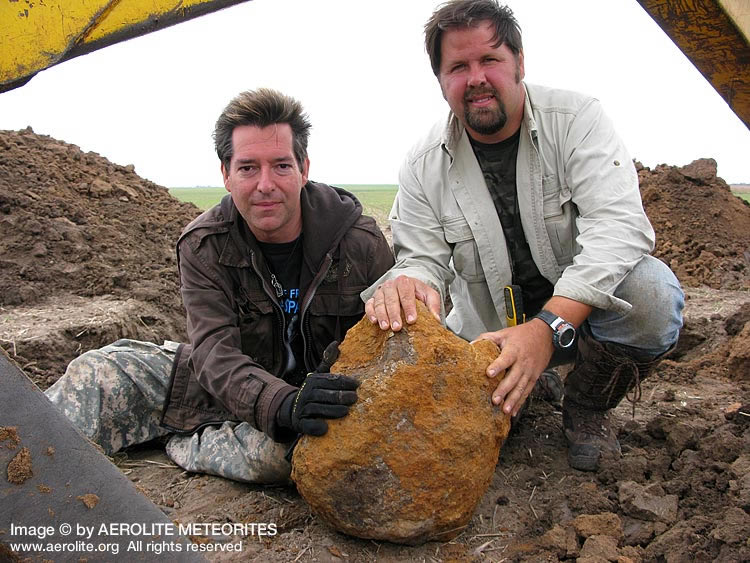 posted on Jun, 21 2015 @ 02:45 AM
link
Thanks for this. It is something I knew nothing about but strikes me as fascinating. These things are fantastic. I wonder what the metal around the crystals is? Iron I suppose.

On the fringe side (only fair), there is the Planet Phaton hypothesis. This theory postulates the premise that the asteroid belt was created by an exploding minor planet.

Creation of the Asteroid Belt 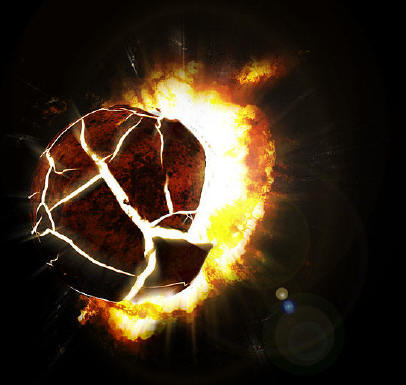 Heinrich Wilhelm Matthäus Olbers, who formulated the planet Phaeton hypothesisPhaeton (or Phaëton, less often Phaethon) is the name of a hypothetical planet posited to have existed between the orbits of Mars and Jupiter whose destruction supposedly led to the formation of the asteroid belt. The hypothetical planet was named for Phaëton, the son of the sun god Helios in Greek mythology....

Theories regarding the formation of the asteroid belt from the destruction of a hypothetical fifh planet are today collectively referred to as the disruption theory. This theory states that there was once a major planetary member of the solar system circulating in the present gap between Mars and Jupiter, which was variously destroyed when it veered too close to Jupiter and was torn apart by the gas giant's powerful gravity. In modifications to this theory:
-it was struck by another large celestial body
-it was destroyed by a hypothetical brown dwarf, a companion star to the Sun known as Nemesis.

The Theory of EPH

The scientific EPH is the theory that comets, asteroids and most meteorites originated in one or more planetary explosions in our solar system. This theory is the brainchild of the American astronomer Dr Tom Van Flandern, who has been accumulating an impressive array of evidence for it since the late-1970s. Dr Van Flandern is the author of numerous scientific papers on the EPH and of the book ‘Dark Matter, Missing Planets and New Comets’, published by North Atlantic Books in 1993

In closing this little piece, I hope that by exposing the evidence of our violent beginnings, we could find enough time in our frantic daily lives to realize the beauty of our Solar System, and learn to have more respect for the orb we inhabit.

From our standpoint, things did not go so well for many of the other worlds that orbit (or once orbited) the Sun.

posted on Jun, 21 2015 @ 03:11 AM
link
Thank you! Great post. Most science posts here end up as an argument between scared, uninformed sheep and people who know just enough to make their BS sound legit.
I love meteorites. When the Chelyabinsk event occurred, I was so thrilled. And I've heard of pallasites before, but I had no idea that was the.working theory on their origin. Absolutely awesome.

Browsing through the titles I misread this as parasites the core of our planet. However I was glad to find it wasn't another thread on bankers.

Very interesting subject which I have never had the pleasure of coming across. Thanks and I will definitely try to find more on these. I'm sure they sell them on ebay lol

originally posted by: grumpy64
Thanks for this. It is something I knew nothing about but strikes me as fascinating. These things are fantastic. I wonder what the metal around the crystals is? Iron I suppose.

Yes, the metal is Iron, with a Nickel content.

Basically, the Iron is further classified by the Nickel content as:

originally posted by: charlyv
Since meteorites are a kind of specialty of mine,

Care to elaborate? Do you hunt them, or study them scientifically, or just collecting as a hobby?

Great read in part 1, I learned something, s&f. It makes me wonder about the processes that would cause 1cm size chunks of olivine to mix with iron like that. In part 2, yeah what kid doesn't look at a map of the solar system and see the asteroid belt and wonder if a planet exploded there?I know I did, but then we're told by mainstream scientists that's probably not what happened because the massive gravitational influence of Jupiter would have prevented such a planet from forming.

Oh man I have found some on ebay.
Imagine having a 4 billion year old thing!! .
Cheers for the thread they are lovely and fascinating.

Not saying this is true but Hypothetically would the explosion of Alderaan result to the creation of Pallasites?

I collect them and study them as well. It is cool to handle things 4 billion+ years old.

I would like to write a piece on CC meteorites, but there are a few threads in here on the subject.

Not saying this is true but Hypothetically would the explosion of Alderaan result to the creation of Pallasites?

Best answer is only if Star Wars was for real.
Theoretically, since it was a rocky planet... Then Yes, the mix at the mantle/core would produce pallasite asteroids.

originally posted by: boymonkey74
Oh man I have found some on ebay.

Yeah, I looked as well, they are not event that pricey. I may grab one for my curio cabinet.

Price follows rarity. The top of the chain is Esquel.
The finest pallasite ever found.

The olivine in Esquel is gem quality Peridot, like in most Pallasites, however Esquel is the clearest and greenest. It is amazing to handle a slice of it.
edit on 21-6-2015 by charlyv because: content

Perhaps the first foray into metalwork was the result of such a find.

Even more interesting is the components of the Universe and all the interesting particulate materials therein.

What is the meteorite name(s) and make sure you buy from an IMCA certified dealer.

Remember that meteorites are like a commodity. All meteorites, of all catagories, sizes and rarity have a market price range per Gram. As sizes go up, that figure falls. You need to deal with certified dealers to be sure you are in that ballpark.
edit on 21-6-2015 by charlyv because: (no reason given)

Now I have to have some.

The few that I looked at have documentation and eBay has full buyer coverage against fraud. Here is one that looks similar to yours.

The few that I looked at have documentation and eBay has full buyer coverage against fraud. Here is one that looks similar to yours.

That is a reputable dealer. That Esquel meteorite is absolutely gorgeous, and is what I am talking about top of the line.
The price is ballpark and I would love it in my collection any day. Go for it, you may not find one like that for a while, it is so rare.