Top NASA officials have now formally and officially green lighted the Europa ocean world robotic mission and given it the “GO” to move from early conceptual studies into development of the interplanetary spacecraft and mission hardware, to search for the chemical constituents of life.


About time! Europa is an egg that's waiting to be cracked open. What will we find underneath it's icy shell? Mission objectives are basically what everyone expects them to be, investigating the habitability of Europa's subsurface ocean.

In a major milestone leading up to this mission development approval, NASA managers recently announced the selection of the nine science instruments that will fly on the agency’s long awaited planetary science mission to this intriguing world that many scientists suspect could support life, as I reported here last month. 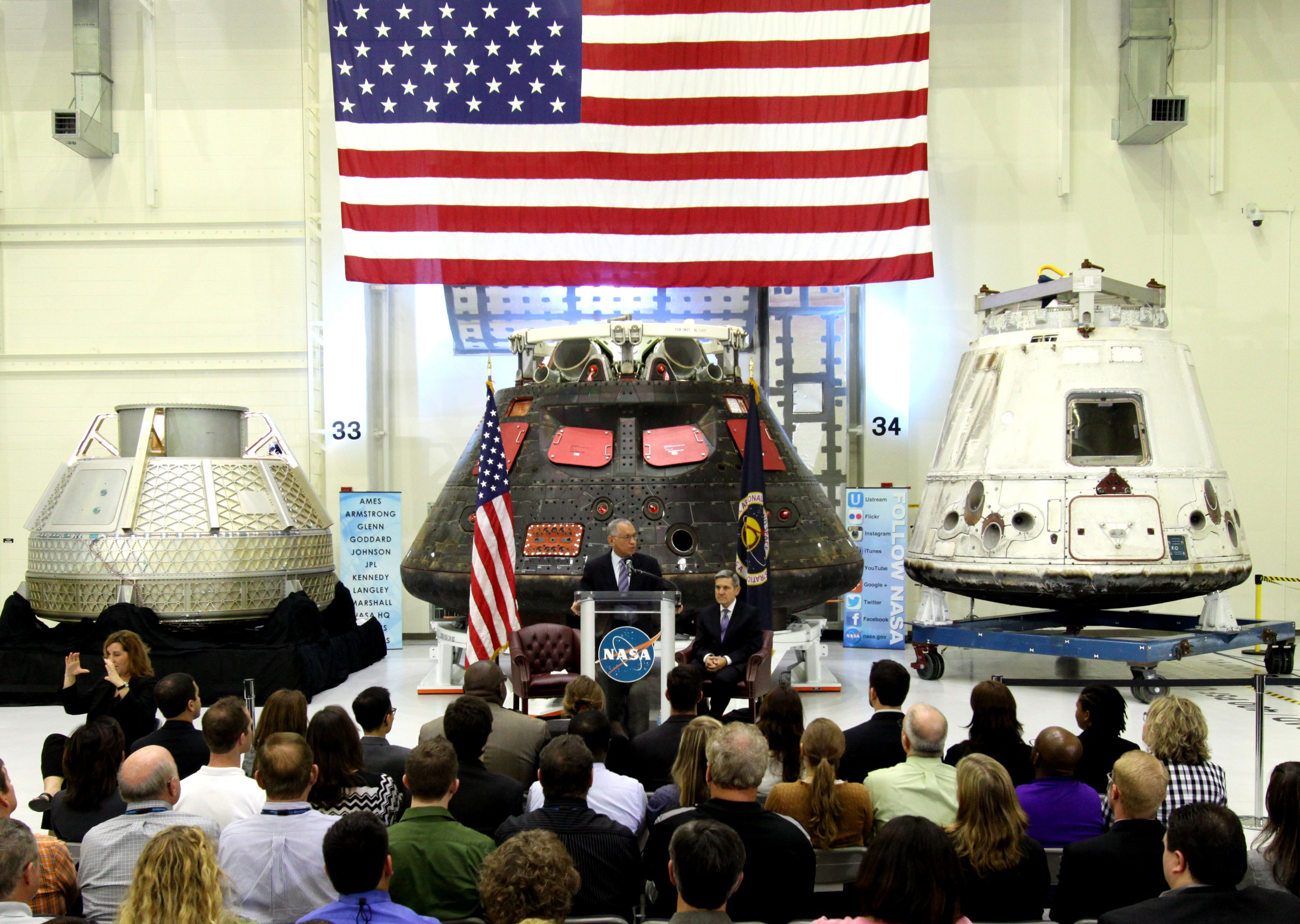 NASA's Europa mission could take flight as early as 2022 depending on budget allocation, governments cooperation and rocket selection. They have their eye set on the heavy lift Space Launch System which is currently in development. These rockets will be the same used to return astronauts to the Moon and possibly Mars.

We had first flown by Jupiter's icy moon in 1973 by Pioneer 10, followed by Pioneer 11 in 1974. Both missions were designed to test the ability of spacecraft to survive the journey through the asteroid belt and Jupiter's magnetosphere. Pioneer 11's RTG power supply is currently dead and Pioneer 10 is barely alive and not tracked anymore due to budget cuts. Their last transmission to earth took place about a decade ago.

Galileo launched in 1989 and arrived at Jupiter in 1995, successfully being captured into the gas giant's orbit. In 1998, Galileo completed a flyby of Europa and managed to come within 2,226 miles of it's surface, giving us a new detailed view of it's features. 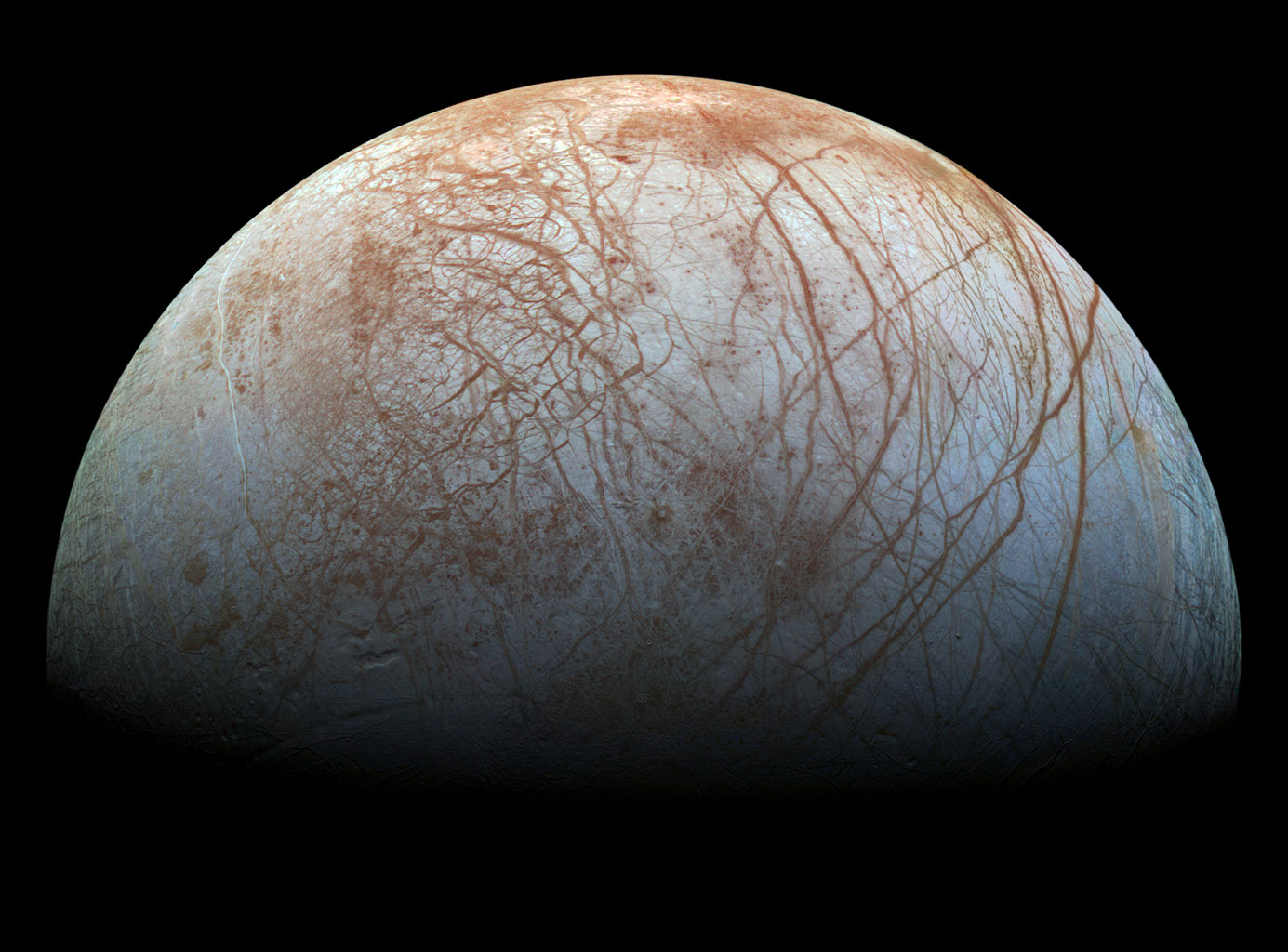 NASA's new probe will be equipped with high resolution cameras, spectrometers and radar which are several generations beyond anything used in previous missions. It will be used to map the moon's surface in unprecedented detail, determine it's composition throughout and hopefully sample the erupting plumes of vapor that have been observed.

The mission currently has a budget of about $10 million for 2015 and $30 Million in 2016. Over the next three years the mission concept will be further defined.

The mission will be managed by NASA’s Jet Propulsion Laboratory (JPL) in Pasadena, California and is expected to cost in the range of at least $2 Billion or more.

The nine science instruments are described in my earlier story- here. They will be developed and built by Johns Hopkins University Applied Physics Laboratory (APL); JPL; Arizona State University, Tempe; the University of Texas at Austin; Southwest Research Institute, San Antonio and the University of Colorado, Boulder.


Christmas is coming everybody! If these future missions are successful, we may finally have one of the most important questions in our existence answered...

Are we alone in the Universe?

We are NOT Alone, but this time we MAY have proof.

This makes me so excited I can't properly express myself. If Ted Cruz stops this from happening I will find a way to curse his family for ten generations.

Took your sweet time NASA-better late than never though.

They really should be thinking about multiple probes to melt through the ice though.
All the good stuff will be under the ice IMO.

They had a guy who makes amazing deep sea robots on board a few years back,but I think they canned that project sadly.

posted on Jun, 19 2015 @ 02:03 PM
link
Sweet. This will be fantastic. My constant criticism is why not send 10 missions, 50 missions, to these moons, to Mars, etc. I know money is the answer/bottomline/catchall. But a great "start" and an exciting mission. Thanks OP, for letting us know. To infinity (or at least to Europa) and beyond.....
edit on 19-6-2015 by Aleister because: (no reason given)

This is 7 years away.....Then many more years to reach Europa....By the time we hear anything, we will probably have technology to allow each and every one of us to fly there by ourselves! If you think we will get disclosure, I'm afraid I've got some bad news....

Disclosure on any sentient life they find, yeah probably not. If they find an ocean full of critters, why wouldn't they tell us about it since it is the entire purpose of the mission? If they didn't plan on disclosing whatever animal/plant life they do or do not find, NASA wouldn't have even bothered to mention the mission to the public in the first place.

You're preaching to the choir.

Hopefully this will be the first of many; Europa might be the primary target but Enceladus and Titan are definitely on the radar and as the years pass and technology improves then there is no reason why we should stop at one probe.

posted on Jun, 19 2015 @ 02:43 PM
link
I really wish they'd try a small Huygens style lander with a mini chemistry lab and a microscope. But good news none the less.

posted on Jun, 19 2015 @ 03:02 PM
link
Sweet. But I hope they find something other than just little bacteria's because honestly that would not be impressive.

originally posted by: RealTruthSeeker
Sweet. But I hope they find something other than just little bacteria's because honestly that would not be impressive.


Life outside of Earth would be incredibly impressive! It would be a major step in our scientific knowledge and understanding of the universe and our own Solar System. It would mean that we are definitely not alone, as humans are just one of the possible life forms.

And, depending on the environment, the "little bacteria" can be a link in a larger chain of life. There may be some multicellar organisms on Europa, even something like shrimp or even molluscs.

I came in here to post the same thing, CraftBuilder, but we need give credit - Arthur C. Clarke, 2010: Odyssey Two.

Can't wait to see what we find there, but I'm still hoping for the sub-surface ROV. The good stuff will be below the ice mantle. Looks like the Radar for Europa Assessment and Sounding: Ocean to Near-surface (REASON) instrument will be the first step. We have to map the surface ice to find the thinnest part of the shell to drill through.

posted on Jun, 19 2015 @ 07:06 PM
link
It should be noted this won't be the only mission to Europe launched in the next decade. European Space Agency has a mission called JUICE (JUpiter ICy Moons Explorer) which will as well.

JUICE was given the green light last November.

originally posted by: RealTruthSeeker
Sweet. But I hope they find something other than just little bacteria's because honestly that would not be impressive.

It would only be the most important discovery in the history of biology and the most significant achievement in the history of space exploration. It would be a defining event in the entire history of humanity; dividing the era of hope for - and mere belief in - the existence of Others, and the certain, rock-solid knowledge that we are not alone; Real knowledge that can be studied and quantified and built upon through further research, not somebody's unverifiable anecdote.

Yeah, not impressive.
edit on 21-6-2015 by Saint Exupery because: I replaced a hyphen with a semicolon, if you really MUST know.

posted on Jun, 21 2015 @ 12:41 PM
link
it's another example of 'intelligent' life being outside our little slice of paradise here on planet earth, probably "intelligent" beings living on/in other planets and moons not just here , good news for those of us feeling alone and isolated