Asreroid Strike in our Lifetime

posted on Jun, 18 2015 @ 12:21 AM
link
Having many occurring Premonitions throughout my life. My last being the most troublesome, because it was with both of my children as adults, and myself, standing at the door watching a massive tidal wave of earth 100s of feet high ripping towards us, and me looking back at my children and telling them there was nowhere to run.

This vision happened nearly 10 years ago, and after i had it, A Psychic from California contacted me out of the blue and wanted to know what i had seen during the time i was an active member of Myspace. She had told me there was a global awakening and that she was drawn to me for some unknown reason, but that she knew i had important information i needed to share with their network.

For years i couldn't figure out what caused the Wave. At first i thought it might have been an earthquake, or even a massive Sink hole that was as large as New york City. But the more i played the image back in my head, the more i was confident it really was a massive earth wave caused by a land based Asteroid Strike.

One thing about me and my visions as they come true, is that i begin feeling very paranoid and unsafe. I begin taking on flight characteristics like a horse or a cornered wild animal, and for some strange reason for the last 6 months, Ive been feeling very uneasy and it seems to be getting worse as it feels some dangerous event is getting closer.

Whatever it is it will be soon, as my Visions have never lied to me

originally posted by: Ultralight
a reply to: SPECULUM

Prepping will do nothing for you, but give you a false security. Its best you seek your maker and thank him for the time you were given.

My dreams of world destruction have increased too, but I'm content thinking that it's just because I'm reading about it left and right these days.


originally posted by: Ultralight
a reply to: SPECULUM

Prepping will do nothing for you, but give you a false security. Its best you seek your maker and thank him for the time you were given.

So should I just kill myself now and take the easy way out? I'm 55 my kid reading this is 15 two very different very soon scenarios...lol

BTW I'm surprise you are still alive with the gravity of it all and you know..

posted on Jun, 18 2015 @ 01:38 AM
link
There's no need for anyone to off their selves over the inevitable. Inevitably we must all die anyway. Just live life like there's no tomorrow and be Satisfied you were allowed to be part of the Experience

Queens Brian may agrees there will be an impact , just the timeline is not known . And why do i believe him , derrr its Brian May . Astrophysicist and rock god .

posted on Jun, 18 2015 @ 02:56 AM
link
Good thing these predictions are always failures,
Just enjoy the life you have, stop hiding under your bed, and freaking all of the stupid people out.

But the more i played the image back in my head, the more i was confident it really was a massive earth wave caused by a land based Asteroid Strike.


If sizable enough it won't matter if it strikes land or sea.

CNN showed a simulation of this. The perspective was from an f 16 fighter flying just ahead of the wave just below the cap.

The strike was mid ocean, the wave 1500 feet high, 600 feet deep and about jetliner speed. So here it comes, rolling ashore continuing on without changing form from sea to land. Everything is destroyed as this monster plows the earth.

The jet is just ahead of the front and pops up above the wave top revealing 6 more waves just like the first in close succession, back to back, same height and speed. And all the way back on the horizon is a monster fireball brilliant white, climbing thousands of miles above the horizon.

More than likely any asteroid will hit ocean but affect the surface of the planet the same regardless. To the shock front, densities of land or ocean are synonymous to that level of energy.

Toss a sizable pebble into a shallow puddle and watch the wave effects it creates spreading from the center of impact.

originally posted by: hutch622
a reply to: SPECULUM

Queens Brian may agrees there will be an impact , just the timeline is not known . And why do i believe him , derrr its Brian May . Astrophysicist and rock god .


The only thing i foresee is that the Asteroid in question, has to be of a larger significant size, Due to the height of the Earth tidal wave. It must be figured in order for the ground to fluently roll at a height more than 100 meters, The Asteroid must be the size of a large city, or in miles across and millions of tons. It will be seen Coming

Would you believe me if I told you I WANT it to happen.

I am hungry for justice and I would gladly sacrifice my own life if it meant that massive size justice could strike United States.

Evil has to be stopped, somehow, at any cost eventually.

If I was God or some powerful space alien. I would have shred the US long time ago, and I would use it to tell other nations

...still going to walk my dog tomorrow, still going to surf at sunrise. It might be the last day, it might not, but I am sure as hell not going to worry about it. I did my time on-point, I'm good.

originally posted by: SPECULUM
Having many occurring Premonitions throughout my life.

Whatever it is it will be soon, as my Visions have never lied to me

You are posting in the dreams forum. Dreams are but infinite variations of what your mind makes up. Sometimes boring thinges, sometimes exciting things, sometimes enjoyable things. But basically random things. Random things are sh#t things.

Or did you watch "Interstellar" lately. I bet you did. You have giant wave there. Try better next time... good luck.

posted on Jun, 18 2015 @ 04:33 AM
link
I also dreamt some years ago of meteor showers on the earth. I had 2 seperate dreams that were very similar. People were running trying to find shelter. And meteors were raining down everywhere. So far my dreams have not become true which I'm glad about. I do however get that forboding feeling, like something is about to happen soon. Maybe I just have watched too many movies and read too much doom. Who knows. Only time will tell.

posted on Jun, 18 2015 @ 07:11 AM
link
Life has already too many major everyday problems, to be worried of getting hit by an asteroid.

At least it would be spectacular to watch... and a nice way to die.

I had a dream recently that has really dig in a bothered me. I'll post about it later today if I can, but there more I research what it could be, the worse I feel about it.

I'm not sure that you're wrong anymore, and that bothers me the most about things right now. Just a couple of weeks ago, I would have chalked your dream up to an over-dominance of doom imagery in our culture and media, but my own recent experience has me second guessing some of this.


So should I just kill myself now and take the easy way out?


No way Xtro. We need to find out where this things gonna hit, and have an ATS meet up. ALL members welcome to watch the end of the world together. BYOB. 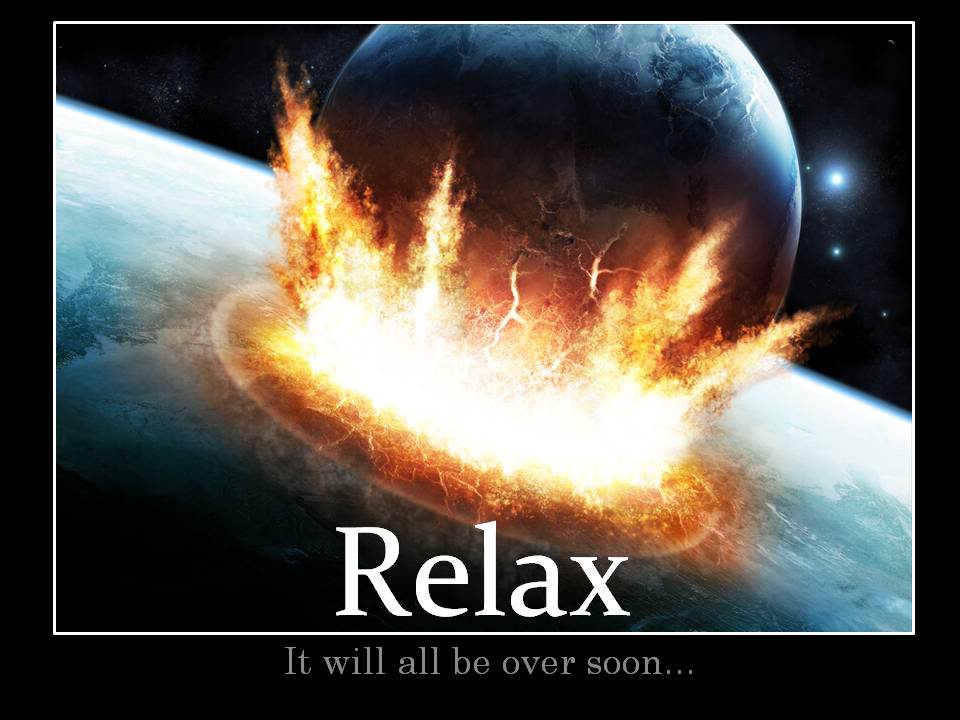 This reminds me of something my mother used to say.
Better I owe it to you than cheat you out of it.