posted on Jun, 17 2015 @ 09:10 AM
link
Now, many people on here and in general, myself included, often keep questioning why the "good" cops never speak against the "bad" cops and their behavior. This article is a very good example:

In 2011, Crystal witnessed two fellow cops beating down a drug suspect after the suspect, fleeing from the officers, kicked in the door of a home belonging to another officer's girlfriend.

For reporting the officers’ actions to the State’s Attorney’s Office, Crystal was labeled a "snitch" and a "rat cop." The threats and intimidation -- which included someone putting a dead rat on Crystal's windshield -- are outlined in a multimillion-dollar lawsuit that Crystal filed against Commissioner Anthony Batts and the BPD.

“You know that sickening feeling you get when someone is after you?” Crystal asked. “That’s how I felt every day.”

This guy, who always wanted to be a cop since he was a kid, now basically has to leave his home—selling, or rather giving away his house—and moving to ANOTHER state because he fears retaliation.

And I suppose he has every right to fear. That the police department is JUST like organized crime is evident in this case alone, and it's extremely sad and frightening.

Don't cross that blue line, don't snitch against the "family," or you will pay.

That's what 50 years of mob ties and corruption will do to you.

I feel for the good cops who are just trying to uphold the law, however justice is just another word in the dictionary nowadays. 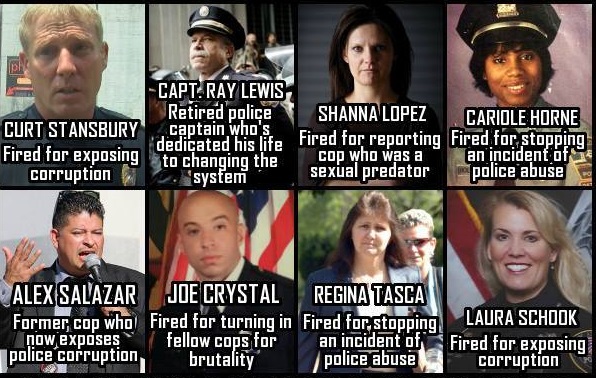 These good cops are guilty by association and that is not fair.

I forgot to mention the farcical judicial system.

Sammy Gravano ratted out his family and he was released and allowed to keep his earnings, and what did he do? he used his ill gotten funds to buy drugs which he sold to school children. But do we ever hear about the cop that busted him or the judicial system that let him walk free despite the fact that he sanctioned a number of murders? no.

Yes, this is exactly what is both needed and was forgotten about our bill of rights. The point of a militia is entirely to police the state.

What an absolute shame.

posted on Jun, 17 2015 @ 01:20 PM
link
It is up to the real true WhiteHats to make sure people like this man recieve 110% support in not just maintaining their lives but in getting help from us all to have better lives because they stood up for EveryMan.....so please those with the power step-up anonymously and give this man a Job somewhere where his life and his Families lives will get BETTER...lets be the Village for these people OK?Put him somewhere making 200K a year doing good things far from law enforcement to show the world it PAYS TO DO GOOD THINGS FOR HUMANITY....crowd-fund this humanitarian to safety and MORE GOOD PEOPLE WILL STEP FORWARD....we the Village must throw in our combined resources to protect them.

The TYT did a great report about this case.

posted on Jul, 22 2015 @ 09:07 AM
link
With the recent case of Sandra Bland being found hanged in her cell, I'm reminded that there is still hope as long as people like Joe Crystal exist.

But there aren't enough Joe Crystals to make a difference.

And the ones that have yet to speak up or do anything will look at this case and may very well likely decide it's not worth the risk and either remain silent or become part of the problem.

What's to be done is that his fellow officers need to support people like Joe Crystal, rather than make life so impossible for him that he winds up quitting his job as a police officer.

So, in this case, you are saying that all of the officers who have been behaving badly should just stop and understand the error of their ways?

The situation presented (corrupt police departments) isn't going to change because there is no interest on the part of those corrupted to change. They get away with (daily) whatever they can conceive and have the weight of officialdom behind them.

A broken system that benefits from the breaks will not fix itself.

Well... how do you propose to change the system so that officers will honestly self report or report fellow officers? Then there's that judicial system that seems to white-wash most, if not all misbehaviour?

The Internal Investigation Boards are sort of like having the fox guard the chickens, imho.
edit on 22/7/15 by masqua because: (no reason given)

If the bad cops are merely an anomaly and good cops greatly outnumber them then surely things like this aren't possible, right? How do just a few bad apples gain such influence over the majority?

Watched a good vid on youtube about what should be done when the good guys go bad.

According the administration this is why all police need Federal oversight.
You know, since corruption doesn't exist at the Federal level.

posted on Jul, 22 2015 @ 01:25 PM
link
Let's get it right. Union thugs. You can never clean it up until you get rid of the unions. Did anybody here hear about what happened in California a few years ago? There were a couple of City Councilmen who were pushing for changes in the way that the police were doing thing. The local police union, hired a private investigation company who set the Councilmen up for DUI's with the police fixing the results.