Well, pretty sure I qualify as pagan, and I wrote this in a past life...

Definitely my favorite, of my own songs.

A great song, but also a bit of a Hollywood stereotype about people who did make war, but were also pretty peaceful and pedestrian farmers for ages, and adapted quite quickly into new societies.

Maybe the warrior focus more reflects the needs of our age, and a siege mentality that traditional lands are being invaded and need to be protected (not always entirely unfounded).

posted on Jun, 16 2015 @ 06:21 AM
link
Ancient Orphic Hymn to the nine Muses with modern classical arrangement

I will be listening to this when I do my daily "work-out" ritual.
I do believe, at least for myself, that pagans should be physical, even if I don't want to be Arnold Schwarzenegger.

This makes ATS worth it - new music and material that slowly becomes part of the song and poetry of my life.

Sorry, this is a bit metal at times, but I personally love this track and thought I'd throw it out there for you to try out.

Just to say again, all genres of music are welcome, and I personally like metal very much.

So far every song has had a link to paganism, but my plea was just that if a song doesn't, then just briefly explain how the song matters to you as a pagan.
So, for example, if people want to play The Locomotion by Kylie, go ahead, just tell me why you put it here.
Maybe the coven dances round in a locomotion, or the circle of life is a locomotion.
Otherwise all genres go.

posted on Jun, 16 2015 @ 02:52 PM
link
a reply to: halfoldman
Well said my friend, many metal bands have played a big role imo in modern neo pagan wave.
Just like pagan rock, speaking of which this is bright example of this genre

As a polytheist pagan I am mainly interested in Greek-Roman polytheistic (or even pantheistic) ''religion'' and philosophy,

A beautiful hymn ''prayer'' to the Great Goddess that all pagans share...
But Orpheus has the charisma of magical words to describe her beauty.

Ancient Orphic Hymn to GAIA and Physis (Earth and nature)

(Orpheus was a legendary musician and poet, in ancient Greek religion and myth. The major stories about him are centered on his ability to charm all living things and even stones with his music, his attempt to retrieve his wife, Eurydice, from the underworld, and his tragic death at the hands of those who could not hear his divine music.)

Translated lyrics from ancient text, for anyone interested;
Gaia Goddess, mother of blessed Gods and human,
All-nourisher, all-giver, all- ripener, all-destroyer,
Inspirer of growth, yielder of beautiful fruit in due season,
Foundation of the endless cosmos, many-splendoured lady,
With the pains of child-birth you bring forth all manner of life,
Eternal, highly-revered, deep-bosomed,blessed one,
Rejoicing in sweetly-breathing greenery, many-flowered deity,delighting in rain
Around you heaven’s teeming stars,revolve in ever-winding flow most awesome.
But, blessed spirit, may your fruits increase, and with joyful heart,
Look kindly upon us this time and for ever....

Technically I'm a shaman with zero formal training. I borrow from the old civilized religions, such as Greek mostly, probably because I read children's stories while younger based on Greek religion. I'm thinking that exposure as a youth has much to do with how we visualize and experience things later in life.

And then comes the unexpected.


Of significance to me are the characters Athena and Arachnia, and the date of writing, 1996.

What I don't quite get is why " Athena Goddess-born lady," maybe women have an inherently different view than men?

posted on Jun, 16 2015 @ 03:38 PM
link
I'll be back dear brothers,
Forgiveness, we had a controversial political holiday in South Africa, and some other blogs are demanding attention.

To the band that guided me into Paganism. 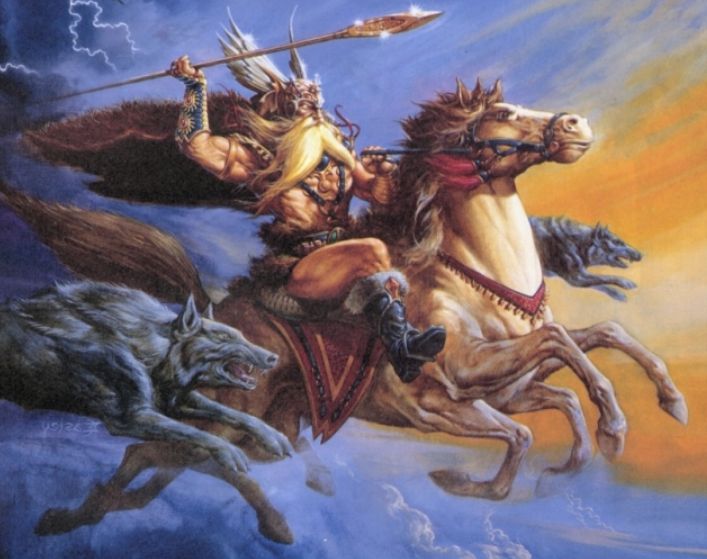 I will be back.
And flip it, if I'm not I'm in Asgaard, drinking in Valhalla!

Thanks again for such an amazing thread.

Dear pthena, thanks so much for the song.
Already shared on other blogs, and it's just lovely.

Don't worry about formal training.
I was also hung up on that for years.
Usually one ends up with a cult leader, who just grabs your money.

Maybe in the past that was important, but nowadays almost everything they can tell you is available on YouTube lectures and many books.

If a good teacher comes, then great, but not to force it.
Life is the best teacher.

The energies, deities or ancestral spirits have already chosen you.

Yes, men and women do have an inherently different view.
I find this is so, even if there is some masculinity in many women, and some femininity in many men.
Then there's also transgender and intersex people, who are also great teachers.
Men and women are different, but they can compliment each other.
Bringing the energies together (even in the self) is very powerful.

It's not an easy walk.
it is very hard, and often people won't understand, and there's extreme loneliness.
But that is the real training.

Thanks for the song, and best wishes with your journey.
halfoldman.

I was also hung up on that for years.

Maybe in the past that was important, but nowadays almost everything they can tell you is available on YouTube lectures and many books.


I didn't much feel like going to Mongolia or Siberia for training. I gave away my most helpful book, and I didn't keep track of the name of it. Come to think of it, I don't remember where I got it from either.

Thank you very much for the encouragement.


Of all Danzig's work I feel Samhain is the best...

You have a really nice taste in music sir...

I am a big fan of Faith And The Muse.

Battle of Tyr, Odin's Court, Valhalla from the wizards of metal Black Sabbath


.. You came and slaughtered ODIN,
You came and murdered ZEUS,
Our Gods became your satan
And Satan became our God...