Spirit Rover anomaly. The ONLY anomaly I find of any interest on Mars....of true interest.

posted on Jun, 15 2015 @ 07:16 PM
link
Interesting for sure. Though likely a rock, if it is a skull, there is no reason it has to fit into the human form as far as the mandibles go, or anything for that matter.

It could just as easily be a skull of some weird animal that just has the upper part resembling a human form.

Anyway, it can't be ruled out 100% that there wasn't a prehistoric civilization or even just animals there, but I have seen some incredible anomalous looking rocks here on earth.

posted on Jun, 15 2015 @ 08:33 PM
link
a reply to: Soylent Green Is People
I understand what you're saying. I haven't lost my ability to look at things like this with a critical eye. I just prefer to consider the possibilities and the impossibilities equally. As much as it is in me to do so, anyway. Neither one threatens my world-view.

But I have to agree with others who have asked:
What would the ruins of a million or billion year old civilization look like on Mars, let alone earth? Especially if it was a catastrophic ending.

I don't think it's such a stretch at this point to consider it a real possibility. Much more than what we have is needed for any kind of definitive evidence, but the truth wouldn't bother me, whichever way it went.

Star, because I usually like your posts, and this one is no exception.

originally posted by: Sunwolf
Now I`m getting into this:Is that a two fingered hand all the way over to the bottom right?

posted on Jun, 16 2015 @ 12:10 AM
link
It is 2.2 miles long and 0.67 miles wide and if I remember correctly, about 800 feet high. So probably not a statue or a mask. The link below has some information about this picture and some higher resolution photos taken at a different time. So do NASA's website and Wikipedia. I saw an television documentary with a piece on the 'Face on Mars' recently.

There's a tendency of the human mind, known as pareidolia, that science says causes us to see faces where they sometimes aren't - such as faces in clouds or in other things such as dirty walls, toast, etc. Perhaps that's why we see a face. NASA and many scientists say the face appears in this photo due to low resolution photography and the way the light plays on the formation.

Anyhow, who knows. It's certainly an intriguing picture, whatever it is or isn't. Thanks for sharing it.

You will see what you want and what your beliefs are based on.


It looks like a skull kind of yes. But many rocks form different and often similar shapes and looks to regular objects.

Like you said you believe 100% mars had a civilization once. Whether you like it or not you see exactly what you want and your mind will fit it to your belief.

There is nothing from any mars photo that I have seen on ATS that gives me the impression life was once on that planet. NOT ONE THING.

posted on Jun, 16 2015 @ 01:35 AM
link
To be honest it looks like a human skull, first I thought the mandibles were a bit large, but looking at it closely it looks like the mandibles are just two rocks and the actual human skull is hiding behind them. Though I will admit I wish this to be real, I really wish it was some evidence of something more than just boring old rocks. I just don't see why NASA would let us see it if it was really there as I assume they would look over their images and photoshop anything out they dont want us to see.

So why then would it actually be a skull or anything more than a rock? It seems pictures from Mars are a dime a dozen and prove nothing, even if we find a pyramid up there in plane site with ET waving at us, it will all just be arguments over pizelization or shadows or whatever. What is even the point anymore, why are we even on Mars at all if its just rocks? 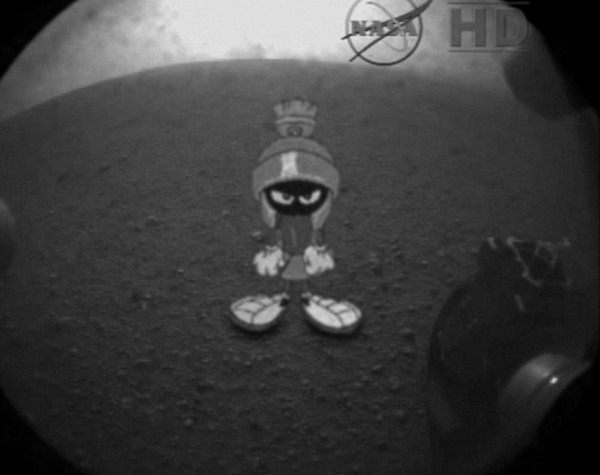 but then heads on mars arnt all that uncommon.. a few from the anomalies thread 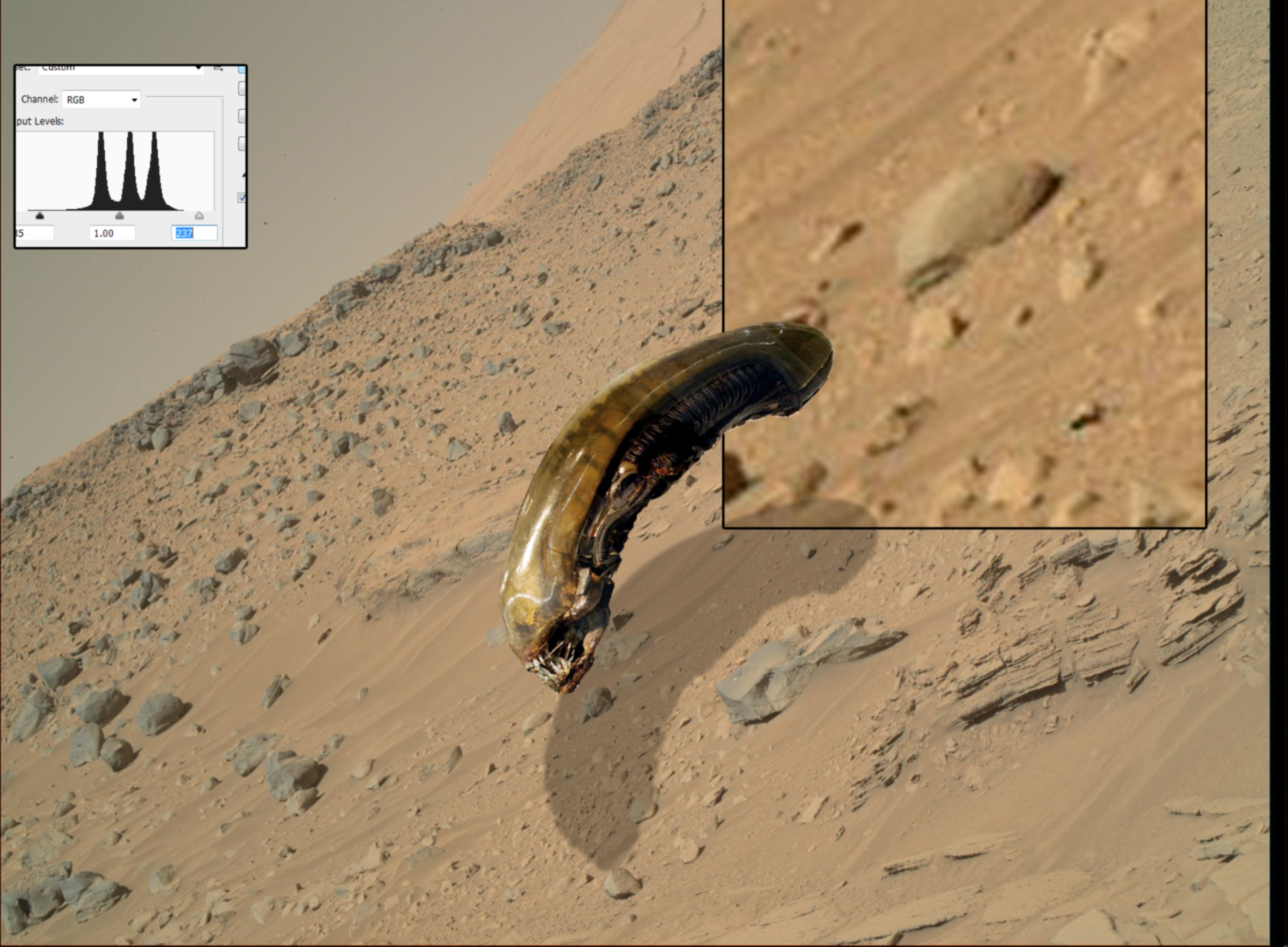 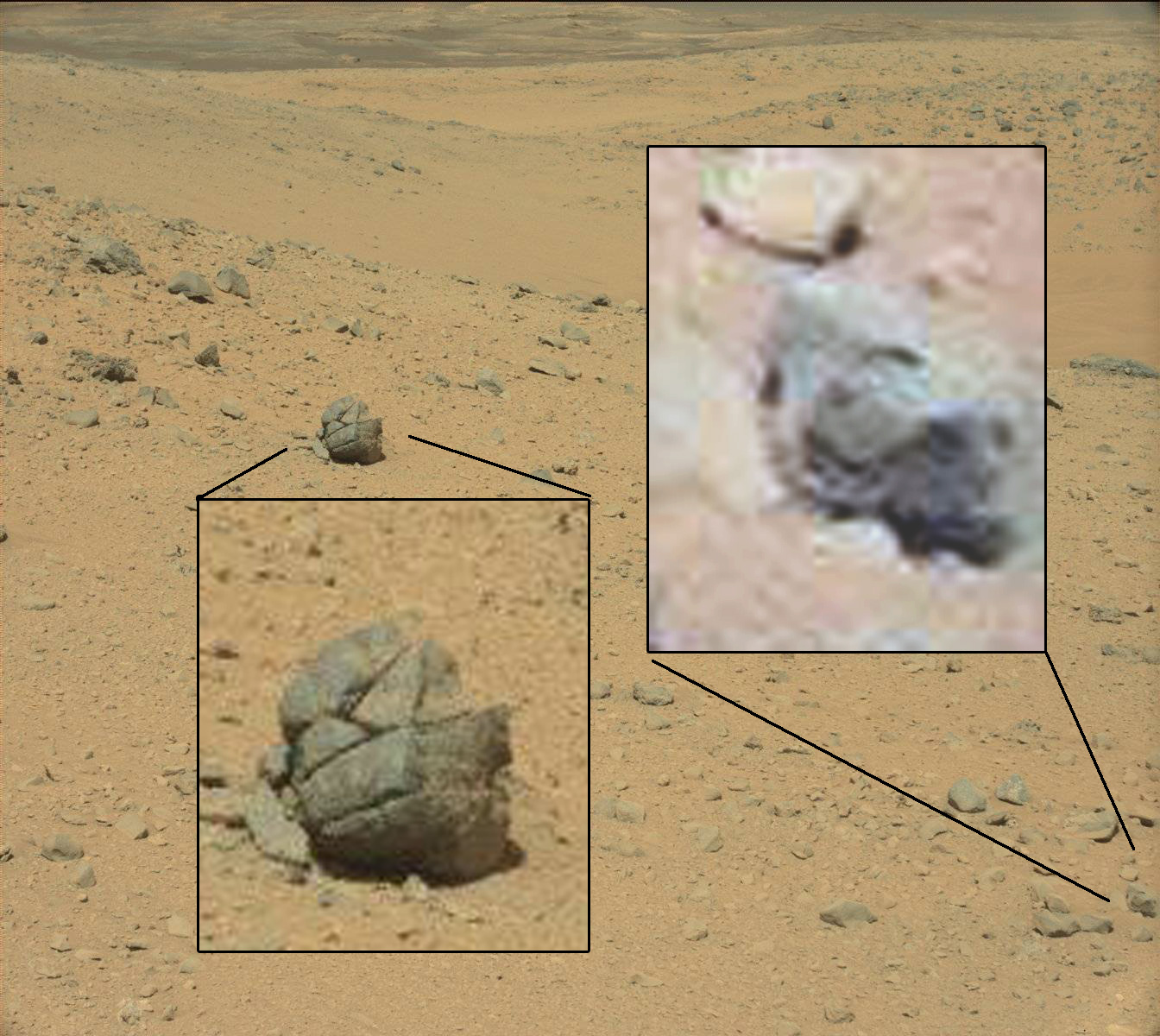 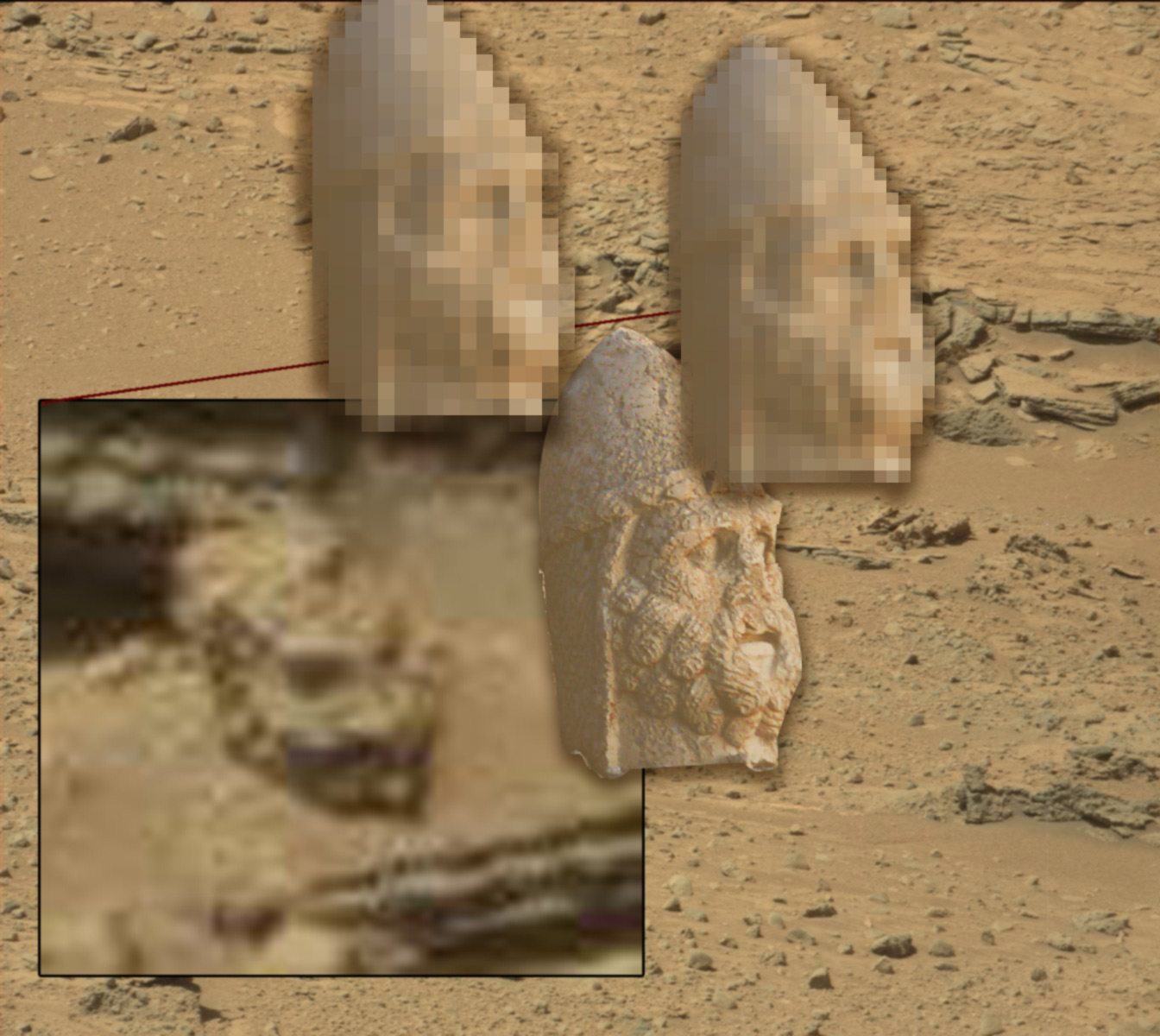 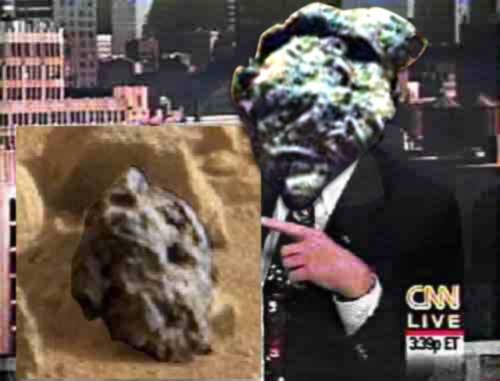 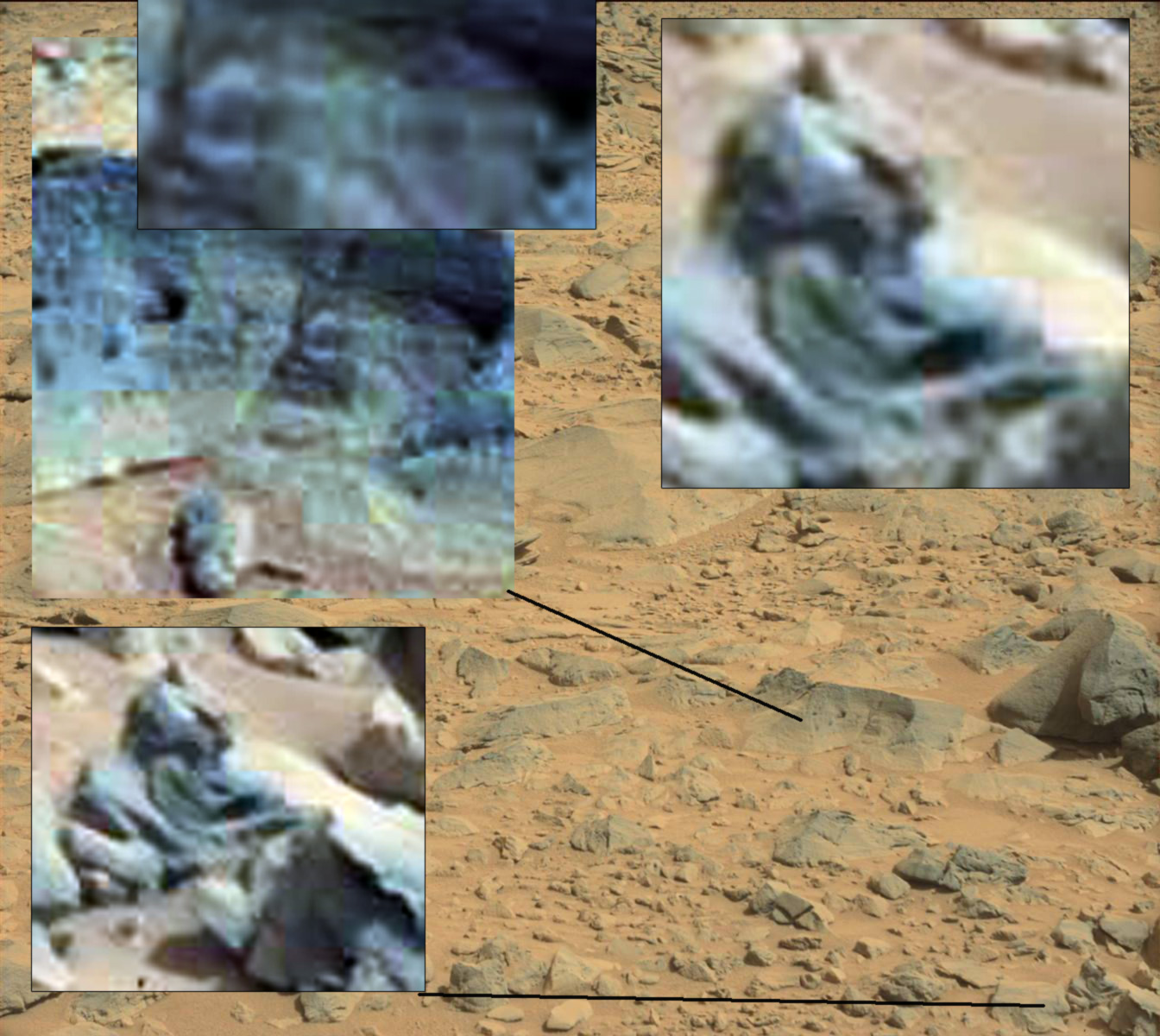 
But you don't know...you can't really be 99.9% sure. I'm not 99.9% sure that it is artificial. Since we don't have boots on the ground all we have are these pics to scour through and look for anomalies. That's what we're doing. It could very well be a natural rock/combination of rocks/sand...we don't know, but there is a possibility that it is something more...I think it's a good possiblity that there was life on Mars much more evolved than bacteria or such....

I just think there has to be a balance between belief and scepticism and both sides should understand the others position without belittling each other.


Is it that hard to believe that maybe just maybe WE are the aliens? We are the "Martians" who came here long ago when Mars was destroyed?

The only problem with it being anything than a rock is that Mars hasnt been habitable(ok i admit,by our standard) for a few billions years.So if a statue was left there by a civilaztion it would be buried by now if not totally desintegrated....

Are you sure about that? Because nature has a great way of reclaiming what once was hers.... 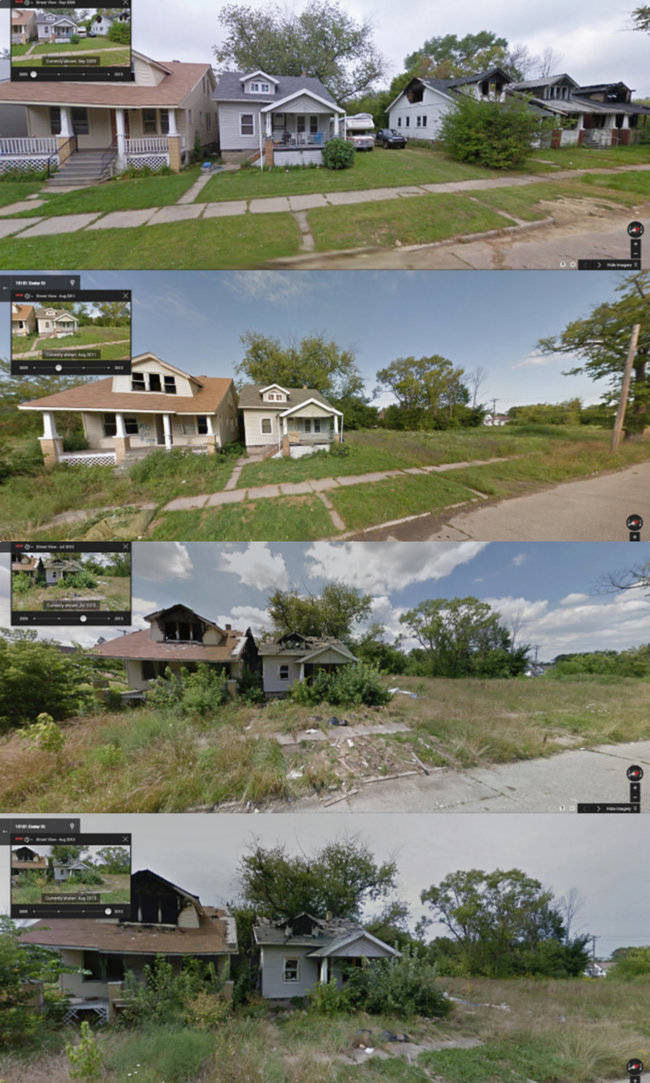 All that after just over 20 years, but you want evidence of a civilization that presumably was on Mars millions of years ago...

Please note (to all): my saying that is not any sort of attack on anybody's right to state their opinion on what this rock is. Personally I think this rock sort of looks like the Imperial masks from Star Wars: Battlefront. Super cool looking rock, but just a rock nonetheless I'm afraid.

I'm loving seeing the civility and decorum rules being enforced again. They've been asleep (the rules) so to speak for so long that I'm actually sort of leery of running afoul of them, as I'll admit to slipping a bit myself in that respect in a 'might as well join 'em'-type gesture.

posted on Jun, 16 2015 @ 08:54 AM
link
Considering Mars does not have any 'weather' I cannot see how a rock would turn into a skull of some sort all on its own, skulls millions of years old are found on this planet, especially when weathering exposes them to the light of day, I think Mars, with its very low atmosphere (0.15 pounds per square inch) would take a lot longer to expose fossil skulls.
damn shame there are no bones to go with it, yet.

Mars most definitely does have weather. Actually, sometimes it has quite intense weather. Whoever told you that there is no weather on Mars does not know what he or she is talking about, I'm afraid. It may not be Earth-at-its-worst weather, but a dust storm is still a storm.

My guess would be that the stone that kind of sort of looks like a skull/helmet/kids Halloween mask is actually a conglomerate, a large body made up of relatively loosely packed smaller stones. We know that Mars was once quite wet, and is still somewhat damp, so it's not inconceivable that such a rock would form there as well as here.

The 'eye sockets' could simply be where some relatively large stones that were once part of said conglomerate had fallen out over time.

The same sort of conglomerates exist on Earth, and also asteroids (some asteroids are just massive conglomerates of smaller meteors) and comets. The latest data from Philae suggests that it's host comet's interior is almost entirely a rocky conglomerate, which excites the hell out of me. It suggests some very interesting things about the very early solar system, but I digress.
edit on 6/16/2015 by Monger because: Clarification


originally posted by: AdmireTheDistance
I agree that the upper part of it looks like a skull, but just because it looks like it does not mean that's what it is. So I'm going to have to side with logic, and say it's a rock.

DO you ever think outside the box?

You only have to look outside the box when the box is empty!

I was thinking the same thing (not a real skull but some kind of statue). If it is not a natural formation then it looks like it was carved out of the rock. It does look oddly symmetric.


Is it that hard to believe that maybe just maybe WE are the aliens? We are the "Martians" who came here long ago when Mars was destroyed? I don't doubt that theory as possible at all. I've read too much over the last decade to not believe it. Before then I would have that it was insane to think.

The problem I have with that theory is this,

How did we get from Mars to Earth?

Ships? (presumably) where are they/the remains?

If we came here from Mars....who covered it up? and why? it would be part of our history and the story would have been handed down from every generation since our arrival, what possible reason would there be to hide the fact?