The "oners", generally, are a group of people who really need their bluff called. When Obamacare was being put through, there were a lot of voices in the medical community who were talking about taking their practices offshore, where freedom still reigns.

There must be a lot of them in Mexico, Brazil, Russia, China, India and Africa now, because what is commonly referred to as "civilization" has pretty much opted for universal health care, or in American parlance, "socialized medicine". 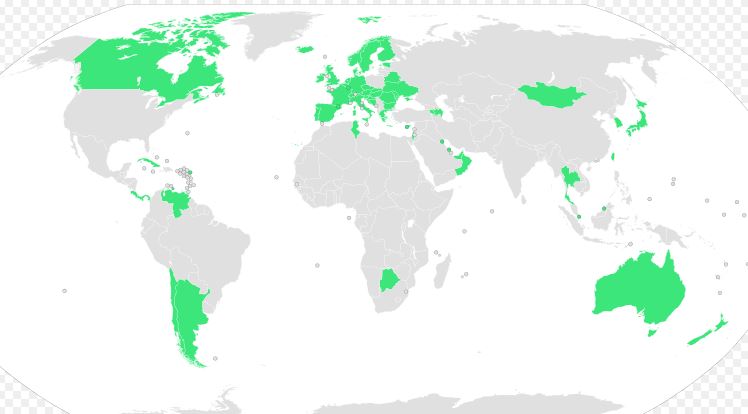 If you want to practice medicine in a place where mobs don't periodically run through the streets, chopping people up with machetes, or where journalists aren't routinely executed by the security services, you're stuck with countries where "socialized medicine" is the norm. Civilization, in other words. (That place that America is being dragged kicking and screaming into.)

I would love for Apple Corp. to be forced to join their tax haven money in Ireland and have their American articles of incorporation revoked. What did H.L. Mencken say, "Once a year one lawyer should be hanged as an example to the rest." That should be done for corporations in the United States. You don't want to pay your taxes in the US? Fine, your corporate status is revoked and you can no longer operate or sell products in the US. Hit the road, Jack.

People are increasingly fed up with "Corporations Gone Wild" and the absurd notion that the American people have no value and no importance in creating the environment that has led to the success of corporations in America.
edit on 14-6-2015 by ipsedixit because: (no reason given)

originally posted by: ipsedixit
Hillary Clinton launched her presidential campaign on Saturday in New York City with the following speech.

"We need to make an America where somebody beside financiers makes money. My mom and pop worked hard at jobs. Franklin Delano Roosevelt. America needs to do stuff. Americans have to get involved because Americans doing stuff is how America does stuff. I'll explain that in more detail as the campaign continues. Taxes. Freedom. Upgrades for everybody. Champions. Me. Bill was a good President. Obama was a good President. Republicans are destroying everything for a buck. Me. Destiny. Minorities, sexual and ethnic. Immigrants. I've done stuff. Rewards. Magic solutions. Pie in the sky. Families. Putin. Sideshow Bob (Israel). America. God."

And there you have it. Vote for Hillary.

On a lighter note, one can't help noticing a problem that Democrats have. The problem is how to mention Franklin Delano Roosevelt without referring to what he actually did. (Republicans have a similar problem in how to reference Abraham Lincoln without getting into how much he detested central bankers and what he did about it.)

In Roosevelt's case, he authorized massive spending on infrastructure as a way of creating jobs for Americans and generally improving the country. The Tax Wall Street Party is the only political party in America at this time which would initiate a second New Deal and, taking a leaf from the book of Abraham Lincoln, nationalize the Fed. They would pay for these initiatives by imposing a very modest sales tax of 1% on transactions in the massive financialized sector of the American economy.

The simplicity of this scheme is frightening to entrenched interests who have been gaming the current system for so long, even though a 1% sales tax could hardly be called "gouging".

Hillary's speech was heart warming. I think she believes what she is saying. Bill and Hill are the best that Americans could hope for in the pervasive environment of criminality that is politics in the United States. However, whether that quality of degradation continues to be tolerated by the American people is open to question. "Environmental" protectionists, like Jeb Bush are going to do their darndest to make sure that the status quo doesn't ever lose its status, but Americans themselves are the final arbiters of that question.

If you are critical of the two parties that have dominated American politics for generations, if you are looking for new ideas, check out the Tax Wall Street Party.

Hillary Clinton should check them out too. Campaign platform plank theft is a time honored tradition in politics and a 1% Wall Street sales tax would go a long way to pay for things that Hillary would like to do for the greatest country on earth, to get it back on track.

Hillary's real speech is at the following link:

WHAT? "BEst hope?" Bill and Hillary are one of the PRIME examples of the rampant corruption in our system.

I haven't really tuned into Sanders myself, but I'll have to take a look at him. Considering the strength of the political machines in place behind Jeb Bush and Hillary Clinton, I expect them to be the candidates.

Some of the candidates, like Sanders, are seen as "flankers" by people in the Tax Wall Street Party. Flankers tie up voter allegiance (in Sanders' case, leftish Democrats), which they throw to the main candidate at the right moment in the campaign or at the convention. Obviously there are "considerations" involved in these relationships.

What would your alternative be to Hillary?

I've seen a lot of material on the Clintons. I'm not naive about them.

originally posted by: ipsedixit
a reply to: NavyDoc

What would your alternative be to Hillary?

I've seen a lot of material on the Clintons. I'm not naive about them.

As they are proven liars, corrupt, taking bribes how can you even consider them? A complete unknown trumps known criminality that is known and obvious.


A complete unknown trumps known criminality that is known and obvious.


In politics?
Not necessarily.

The Clintons do want power to achieve change for the American people. They have profited financially from their position but not excessively. Their backers have profited also. Money flows to the Clinton backers. Protection from "trouble" appears to be the condition attached to that corporate profit. I believe this is how the Clinton machine has operated. It is my opinion that murders have been committed as a result of those sorts of arrangements. My suspicions have never been tested in court.

Having said that, "What realistic alternative do the American people have, to dealing with people like the Clintons?"
edit on 14-6-2015 by ipsedixit because: (no reason given)

posted on Jun, 15 2015 @ 05:46 AM
link
Hillary has literally got to be the worst choice. It's depressing that people are seriously considering her.

originally posted by: beezzer
Whenever Hillary is on the news or I read or see anything about the Hillary campaign, I play this song. . . .

I was wondering if someone would say something.

To OP
Sorry , do research, for they all serve the same master. it doesn't matter who you vote for or what country you belong to. Follow the chevron Symbol aka Vector symbol and realize the one fact that people deny over and over again. There are NO such things as nations and all leaders are in on it. This includes islam, Korea, russia, china the U,S. all 7 continents.

This is what it ultimately boils down to. And noone will save you from your own ignorance.


Sorry to spell it out like that, but this is the reality and the cold hard truth of the world. Oh and those on the side of life... we are loosing because people refuse to WAKE UP!

ok, im out of this thread because my anger just got to me.

It used to be that political buzzwords were something that simply occurred in a speech, now it seems speeches are written around them. I'm sorry, but FDR would be ashamed of being likened to any of the presidents that followed him and knowing that people were using his ideals as a cheap way to garner votes for promises they won't keep would kill him all over again.

Hillary's not as old, but has name recognition to the Democrat old-guard. Liberal Baby Boomers will be her core demographic.

It'll be interesting to see if Bernie can get his message out to enough of the Democratic party members to sway them away from Hillary.

Personally, I find Bernie getting the Democratic nomination much more interesting than Hillary. I think it would make for much better debates later on after the primaries are over with. I'd like to see Bernie go up against the Republican nomination. I'd even throw a "presidential debate party" at my house (since I don't do Superbowl parties).

Oh yeah, I'd break out the BBQ, popcorn...it would be a clash of cultures for sure.

originally posted by: neo96
a reply to: ipsedixit

Who needs to check them out ?

Miss the capitol gains rate raise under the current administration?

The funny part is I guess people learned nothing from the so called 'financial' crisis.

Where there wasn't nothing to TAX because accounts were wiped out.


Those taxes aren't even in the same realm as a transactional tax, which would be hugely beneficial for many reasons, besides the revenue it would raise, which would reduce the tax burden on the middle class. It would reduce speculative trading, put the focus on long term, sustained growth.

With the rapid trading off of stocks, nobody cares about anything besides at most the current quarter. Why should you, when you plan on selling off as long as your cuts have resulted in a nice profit for the quarter? Who cares if you lose your customer base steadily over the next year because of the frustration of dealing with crappy "offshore" tech support?

Also, the capital gains taxes you mentioned were only very recently eliminated and more recently brought back. They were around a long time before that. Further, the "financial crisis" wasn't caused by capital gains taxes. In fact, it came into being at a time when the ultra-rich were experiencing the most favorable tax rates in recent history. There's a complete and total disconnect. Also, no money disappeared when the stock market crashed. It never does. It just moved elsewhere (oil, foreign markets, numbered accounts, etc.)

posted on Jun, 15 2015 @ 11:37 PM
link
The Hilderbeast brought to you by Goldman Sachs and Monsanto for heavens sake people follow the money to see whose mouthpiece it really is.

originally posted by: ipsedixit
The simplicity of this scheme is frightening to entrenched interests who have been gaming the current system for so long, even though a 1% sales tax could hardly be called "gouging".


The current income tax started similarly - something ridiculously low, and any warnings that it could grow were ridiculed. 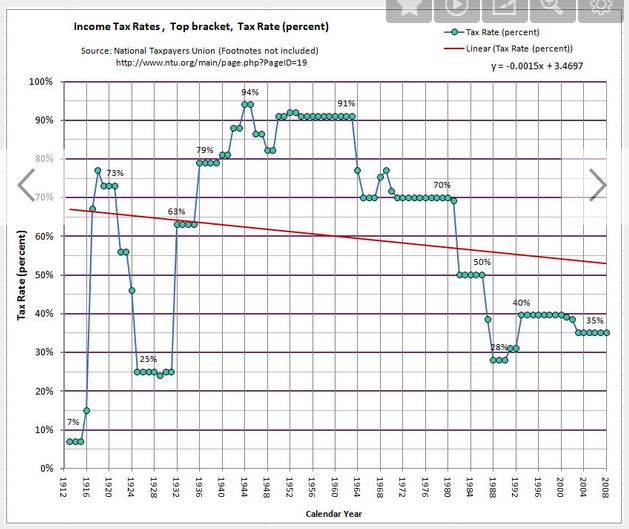