originally posted by: BuzzyWigs
So - not Gaelic?


Was I mistaken about Cthulu also??

Yeah, he is one of the Great Old Ones with Azathoth, Shub-Niggurath, Yog-Sothoth and Nyarlathotep among others.

I was kinda sorta connecting the dots of the Freemasons' origins....I thought.
But - not sure.


I like your avy's style with the top hat!!

Thank you, Bigfatfurrytexan made it for me. He does great work.

Ah. Thank you! I just pulled out my Celtic Shamanism Encyclopedia - I was thinking of Cuchulainn.
My bad. I'm rusty in the matters of witches and shamans.

originally posted by: BuzzyWigs
I'm rusty in the matters of witches and shamans.

Just remember that witches can turn you into a newt and that they weigh the same as a duck because they are made of wood.

Everyone knows that selling your soul to Satan is pointless, that clown cannot do s***.

Satan is much older, well known and fearful than cthulu

Don't worry my friend I will ask Him to forgive your blasphemy...

Don't be deceived my friend,
Satan has nothing to do with NWO, He is not THAT EVIL.

My you be paid a visit by the Black Goat of the Woods with a Thousand Young.

Nice, I've been missing my pet for a while, Satan is still angry with you though...

originally posted by: Dr1Akula
Nice, I've been missing my pet for a while...

'Shub-Shub' (as we Masons call her) has been busy working with some of the new recruits but should be free most of the summer. She could use a little lovin'.

Well said. I believe this is exactly what Jesus meant when he asked the Apostles, "For what have you gained if you save your life and lose your soul?"

Or, from a worldly perspective, as my grandmother used to say, "Some people know the price of everything and the value of nothing." 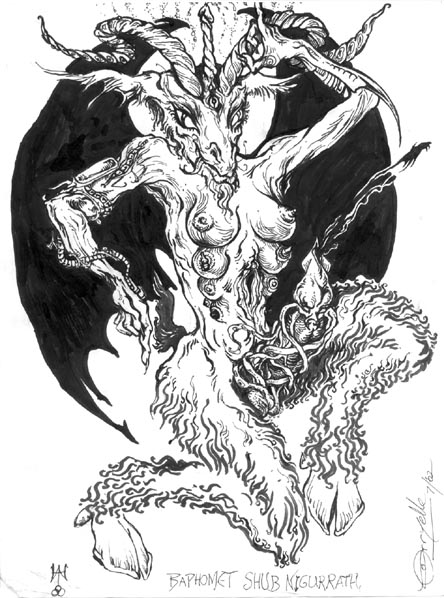 
I am curious who is (Cthulhu)? and what do those words mean that you are saying? Are they some sort of chant or spell?

Also...what do the words mean in your signature?

I believe in goodness, love and doing the right things in life.

Cthulhu is an invention of the writer, H.P. Lovecraft.

Just remember that witches can turn you into a newt and that they weigh the same as a duck because they are made of wood.

Once upon a time, a 15 year old boy went to a demonology seminar conducted by a local nominally Christian elder. That night he conducted the summoning as prescribed, except that he'd forgotten to draw the protective circle (whoops, could have been a fatal mistake).

Luckily, the demon materialized outside the house. The boy heard the heavy footstep with claw scraping on the wood, as the demon came up the stairs. The door was not locked, Oh No!

But try as he might to turn the doorknob, the demon was unable to open the door, because Carnea, goddess of doorknobs made the door as if it were locked.

But seriously, NWO wouldn't get very far worshipping obstruction. It would sort of muck up the agenda.

Why are Christians continuously teaching demonology? Is that like DEA doing major trafficking? (not that I'm saying such a thing is happening, that would be offtopic).

originally posted by: Unity_99
a reply to: Woodcarver


OMG just wake up, go within. I never lost some of what I knew and when I preserved it, not only soulstone memories, but wake ups, Family, contact, and direction on what to research, which in turn brought cracked the veil on some more memories.

Research: etymology, god is Sirius. You can do your own research but they've coded an enormous trap that consistently matches titles of their movie,media and it just fits together so snugly that no error was made.

This is for awareness and gives a quick ability to decode just about anything. But it lacks in promoting this law as if their definitions can overtake your own meanings, when they can't. However this is the kind of mentality running this world.

Allah, in the beautiful names, is the King of Sirius.

en.wikipedia.org...
Sirius B.
Uhh
Saturn has something in common with Sirius B as well, its almost a failed star, a dwarf star/planet.

What I know about home, Family, Love, I know, beyond anything here. I have always preserved Love and Awareness and Compassion and saw this world as mismanaged by evil since I was a young child. In fact was out in the yard very upset after watching vietnam on the news as a preschooler and finally was shouting, "what, what what, do kids have to do it, adults don't understand anything!" And met my Higher Self that day, there was an adult me, right there with me, enveloping me within and without, who told me, in a practical no nonsense way, "You chose to come" and I understood that I didn't have to, was beyond these lessons, but had chosen to help.

Oh!! You have a youtube video about it? I shoulda figured. I guess i'll watch it. But if it's dumb i'm gonna let you know.

This is gonna be a long 6 hours. I'm gonna have to tape a pillow to my face so i don't knock myself out facepalming myself.

This is not etymology, it's word salad. No wonder your posts don't make any sense.if you went to college, you should ask for a refund. Stay away from youtube. Some people will fall for anything.


originally posted by: MichiganSwampBuck
The lord of this world will provide you with worldly gifts here and now and the lord of heaven will provide heavenly gifts in the here after. You just have to worship them faithfully to get the gifts they offer.

Now with pagan gods you have departmentalized blessings doled out to the faithful by specialists. If your needs aren't so great, then you have every other demigod, demon, spirit and djinn to turn to as well.

Ahhhh, you say this as though you are on "team jesus" because of all the perks that will be bestowed on you before and after you die? How is this any dif than selling your soul to some kind of devil?

Then you also talk about pagan gods, Djinn, and others as though they are just as real and you must choose between them. These are pretty big claims to believe without evidence. The world must be a terribly scary place for you.

The world of human beliefs is quite diverse, so pay your money and take your chances. Otherwise, take my comment with the humor it was intended to have. Either way will work just fine for you.

You really need to research your own madness.

It's ridiculous to believe in such nonsense.

The Christian religion is fake, made up. Do just a tiny bit of research for yourself.

Isaiah 66:24 And they shall go forth, and look upon the carcases of the men that have transgressed against me: for their worm shall not die, neither shall their fire be quenched; and they shall be an abhorring unto all flesh.

There are many beliefs concerning the lake of fire and the one that I am beginning to consider is the following.

Wouldn't it be ironic if when this creation is destroyed by fire that this earth or one like it is left as that lake of fire? All of the ungodly who wanted this real estate would get this real estate including Satan who wanted to be a god. Wouldn't it be fitting that this burned up world would become something like we see the moon today. Standing on the new heaven and new earth, look out and see this earth as a world of ethereal fire where the beast and false prophet and ungodly are separated from the righteous. I don't envision the ethereal fire as a consuming fire such as we understand fire and I do not envision a torture of how we understand pain. It is interesting at that.