posted on Jun, 13 2015 @ 06:06 AM
link
Dave Grohl , one of the hardest working and by all accounts nice guy of rock broke his leg while performing in Gothenburg last night , disappointed Grohl told the audience after the fall he'd broken his leg and was off to hospital to get it fixed but the Foo Fighters would return to play another show for them.

The rest of the band carried on in Dave's absence , saying they'd play a couple of party songs for the fans then end the show but Dave Grohl being Dave Grohl decided to get back on stage with his leg leg in bandages and finish the show.

Bellow is a video of the evenings events.

I saw the Foo Fighters years ago at an Ozzfest at Milton Keynes , I wasn't a Foo Fighters fan before the show but after it I was.
I've seen many bands but few put in the passion and enthusiasm for show like Dave Grohl and the band , the guy respects the audience and in my eyes is the consummate professional , this episode just seals his rock icon status.

You're only supposed to say 'break a leg' to actors, it's bad luck for everyone else.

I bet it actually improved his singing a bit, though...

A true musician. The industry could learn A LOT from him, more than it has.

Go Dave, you badass you. 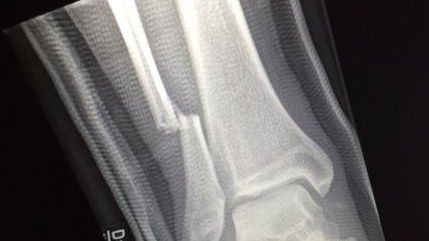 posted on Jun, 13 2015 @ 09:18 AM
link
why is dave grohl getting more attention then the new evidence released about kurt cobain,pretty convenient timing ,and pretty disgusting this has more flags.

kurt cobain new smoking gun evidence
this is the best ever video with new evidence ,and its very shocking i urge all to watch this.

I guess he felt 'under pressure' to finish the show?
sorry.
Talk about commitment, what a guy.

This will forever be remembered in rock history.

Dave Grohl is one committed rockstar.
What a guy.

Cool move. Tickets are expensive. At least he cares about his fans.

posted on Jun, 13 2015 @ 03:29 PM
link
Foo fighters first two albums were the best for me. The rest is just crap.
But breaking a leg and playing on like he did is impressive.

probably cause dave is still relevant as an active musician and kurt is not.

im so tired of hearing about cobain...
every so often the 'new evidence' makes the rounds and the chatter starts.
who friggin cares?

originally posted by: stuthealien
why is dave grohl getting more attention then the new evidence released about kurt cobain,pretty convenient timing ,and pretty disgusting this has more flags.

So your suggesting this is an elaborate plan?. Never heard anything so ridiculous.

On a edge a bit here because have tickets to Wembley show next Friday. The fact he finished this show does give me hope he will continue the tour.