posted on Jun, 12 2015 @ 06:20 PM
link
The traditional funerary practices of the Fore tribe of Papua New Guinea involve dismembering, defleshing and consuming their dead, including brain and spinal tissue. These cannibalistic practices were outlawed in the 1950's and by that time, the prion disease Kuru had decimated the tribe's population. Now researchers believe they have identified a mutation carried by members of the tribe that confers protection against prion disease.

The Papua New Guinea tribe, known as the Fore people, used to conduct a funeral ritual that involved consuming the human brain. Early in the 20th century, tribe members began to develop kuru, a neurological disorder caused by infectious prions, which are proteins that fold abnormally and form lesions in the brain. This was the start of an epidemic of kuru among the Fore people, which at its peak in the 1950s, killed up to 2 percent of the tribe each year.

Recently, researchers discovered that some of the people who survived the kuru epidemic carry a genetic mutation called V127, whereas those who developed kuru did not have this mutation. This led the researchers to suspect that V127 conferred protection against the disease.

In a new study, researchers genetically engineered mice to have the V127 mutation, and then injected the animals with infectious prions. Results showed that mice with one copy of the 127V mutation were resistant to kuru, as well as a similar disease called classical Creutzfeldt-Jakob disease. Mice with two copies of V127 were resistant to those diseases, as well as another prion disease, called variant Creutzfeldt-Jakob disease, which is sometimes referred to as the "human form of mad cow disease."

And because everyone likes pictures and I can't find a decent one of Fore tribal members without nudity, here's a picture of cross sections of two brains, one displaying the degenerative wasting indicative of prion diseases (left) and the other a healthy brain (right): 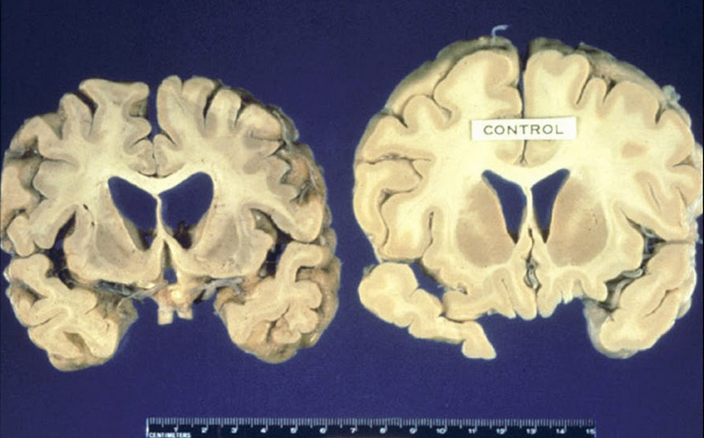 I find this research interesting for two reasons:

1. Prion disease is super scary. I was probably 14 or 15 when I saw my first documentary on BSE ("Mad Cow")/vCJD and to this day I wince a little when I eat beef hotdogs (alas, I still eat beef hotdogs because they're delicious). It can take years for an infected person to manifest the disease — the Fore for example, didn't eat the brains of those exhibiting symptoms — so an outbreak can occur without anyone knowing for years. It's also invariably fatal and among the more horrible deaths a person could have. There has been some promising research in recent years, indicating that the antimalaria drug Mepacrine might be useful for binding to prions.

2. It's an observation of the most fundamental evolutionary mechanism in action. It's estimated that before their funerary practices were outlawed, 2% or more of the Fore population died annually from Kuru and because some the brain was disproportionately consumed by the very young and the elderly, there was a increased likelihood that members of the tribe who didn't carry the mutation would die before parenting children. As the researchers noted, given enough time (and assuming the mutation doesn't result in some sort of disadvantage) the Fore people would have eventually become immune to prion disease.
edit on 2015-6-12 by theantediluvian because: (no reason given)

Yesterday I had a 30 minute brain scan. I am still brain sensitive.

here are a couple of ;less risqué pics 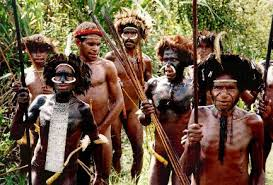 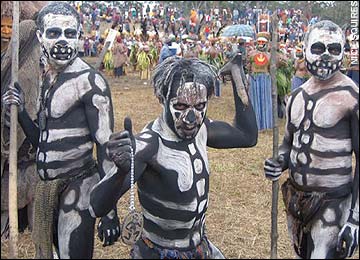 originally posted by: Ultralight
a reply to: theantediluvian

Yesterday I had a 30 minute brain scan.

Did they find anything ? Lol

OP Great informative post thanks!
edit on 12-6-2015 by Greathouse because: (no reason given)

posted on Jun, 12 2015 @ 07:06 PM
link
Wow, they evolved to be able to eat humans without the bad side effects that would goof most of us up. They are very good cannibals. As long as they stay far away from me.

Actually, no news yet but the crap they gave me has not yet worn off.

DISCLAIMER: I have a doctor's note to the Mods stating I am not to be held responsible for my bad posts for a week.

I'm too tasteless for them.

Do you remember the old Yogi Berra Quote after he was hit in the head by a pitch?

A reporter ask him how the test went . He said " they x-rayed my head they didn't find anything " . Lol

Interesting stuff. Really gross to think about though. It seems to be that most living things do develop immunities over time to things that were deadly to elder generations. Barring sudden cataclysms maybe we'll be immortal someday... lol.

posted on Jun, 12 2015 @ 08:44 PM
link
I bet somehow someway THEY are studying it for the NEW white meat,then you'll buy LONG pork at the grocery store after they give you mutagen injections.OR BETTER yet combine that with rabies to make zombie people!


GAD I'm such a pessimist.

Mammal immune system. 200M years of trial and error against 200 years of experimentation. Which are you going to choose?

Hmm. I find this research interesting because it helps show that prions are an evolutionary mechanism.

That 200 years of "experimentation" has slashed infant mortality rates and lead to longer lives with considerably healthier populations where there is access to modern medicine so I'll take that over dying young any day of the week.


Wow, they evolved to be able to eat humans without the bad side effects that would goof most of us up.

That is not what the article says.

posted on Jun, 15 2015 @ 10:01 AM
link
Isn't it more like the only tribe members left are ones who are genetically immune to the disease? It killed off the population that wasn't.