The American Flag is the flag of The East India Company


P 78.
is important to note that, while the British Empire as a world government lost the American Revolution, the power structure behind it did not lose the war. The most visible of the power-structure identities was the East India Company, an entirely private enterprise whose flag as adopted by Queen Elizabeth in 1600 happened to have thirteen red and white horizontal stripes with a blue rectangle in its upper lefthand corner. The blue rectangle bore in red and white the superimposed crosses of St. Andrew and St. George. When the Boston Tea Party occurred, the colonists dressed as Indians boarded the East India Company's three ships and threw overboard their entire cargoes of high-tax tea. They also took the flag from the masthead of the largest of the "East Indiamen"—the Dartmouth. George Washington took command of the U.S. Continental Army under an elm tree in Cambridge, Massachusetts. The flag used for that occasion was the East India Company's flag, which by pure coincidence had the thirteen red and white stripes. Though it was only coincidence, most of those present thought the thirteen red and white stripes did represent the thirteen American colonies—ergo, was very appropriate—but they complained about the included British flag's superimposed crosses in the blue rectangle in the top corner. George Washington conferred with Betsy Ross, after which came the thirteen white, five-pointed stars in the blue field with the thirteen red and white horizontal stripes. While the British government lost the 1776 war, the East India Company's owners who constituted the invisible power structure behind the British government not only did not lose but moved right into the new U.S.A. economy along with the latter's most powerful landowners.


By pure chance I happened to uncover this popularly unknown episode of American history. Commissioned in 1970 by the Indian government to design new airports in Bombay, New Delhi, and Madras, I was visiting the grand palace of the British fortress in Madras, where the English first established themselves in India in 1600. There I saw a picture of Queen Elizabeth I and the flag of the East India Company of 1600 a.d., with its thirteen red and white horizontal stripes and its superimposed crosses in the upper corner. What astonished me was that this flag (which seemed to be the American flag) was apparently being used in 1600 a.d., 175 years before the American Revolution. Displayed on the stairway landing wall together with the portrait of Queen Elizabeth I painted on canvas, the flag was painted on the wall itself, as was the seal of the East India Company. The supreme leaders of the American Revolution were of the southern type—George Washington and Thomas Jefferson. Both were great landowners with direct royal grants for their lands, in contradistinction to the relatively meager individual landholdings of the individual northern Puritan colonists.


"There I saw a picture of Queen Elizabeth I and the flag of the East India Company of 1600 a.d., with its thirteen red and white horizontal stripes and its superimposed crosses in the upper corner. What astonished me was that this flag (which seemed to be the American flag) was apparently being used in 1600 a.d., 175 years before the American Revolution." - B. Fuller

So apparently, the thirteen red and white stripes did not represent the thirteen colonies as the story goes, since the 13 stripes already existed in 1600 a.d..


What I notice is that red and white stripes have also been worn and used in the European nobility.. namely of The Holy Roman Empire (Austria/Germany) 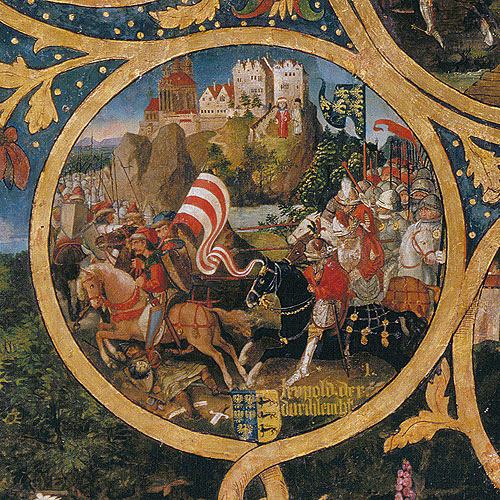 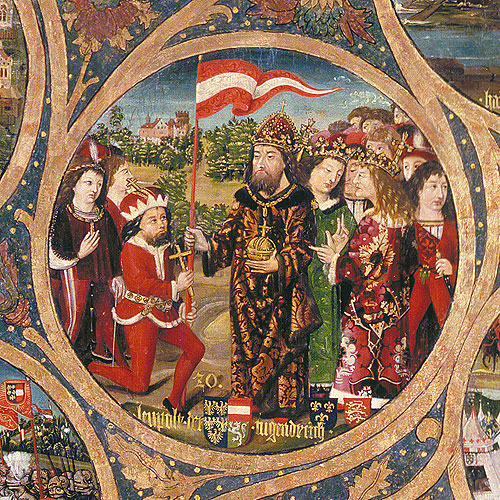 What I notice is that red and white stripes have also been worn and used in the European nobility.

The US was spawned from "European" colonialism.

So, this doesn't surprise me all that much. The stripes became to represent/adopted as, the 13 colonies with the field of blue becoming a nice place to put stars that represented States of the Union.

While not an American, I thought that the stars and stripes went through several versions, even the number of stripes and flags without stripes and colour variations. The number of stripes is probably the optimum balance and the fact the English discovered this a couple of hundred years before our American cousins just follows a trend in may areas!

Anyway, if you look through history you will find that many flags had stripes and that (in truth) there is only a few ways you can show stripes!

Is there a link here? Probably not.

Has nothing to do with the east India trading company. Ther US flag was copied from the grand union flag. This was the first flag of the amarican revolution. It's 5 he British flag with white stripes added. They were easy to make by sewing white stripes on to a British flag this was also called the continental colors. This would be adapted to the US flag in 1777 with the removal of Saint Peters cross.
en.m.wikipedia.org...

posted on Jun, 12 2015 @ 06:43 AM
link
lol, I always knew this would be a bitter pill for some to swallow, it's hard learning one of the biggest events in a country's history was a blip on a superpowers radar, a proxy feint to secure it's lucrative assets in another part of the world. master planning, financialy sinking it's oponent in the process.

posted on Jun, 12 2015 @ 08:05 AM
link
Fascinating! Thank you for this....genuine conspiracy fodder here. I have often thought that the East India company, much like the Templars didnt just fade away, but hid themselves amongst various fronts to continue their control through the auspices of ( initially) fraternities then later corporations.

Buckminster Fuller was an incredible genius, I certainly dont dismiss anything he says out of hand.
reply to: nOraKat

Maybe you can go to the grand palace of the British fortress in Madras, India and take a picture of the picture he mentioned that was taken in 1600 ad with Elizabeth I.

Wikipedia also mentions it in its article of the Flag of the United States, only, it dates the flag of the British East India Company to only 1707. I believe that still predates the Grand Union Flag adopted in 1775.

The American Revolution was fought by Germans

posted on Jun, 12 2015 @ 08:36 AM
link
I think the East India company is considered the first multi national corporation, so the American flag would be appropriate I guess

a big part of the sparking the revolution was the fighting over land from the imperial forces coupled with the companies (primarily the East indian trading company) although i cant find documentation, i believe before the whole boston tea party event, EIC just so happened to hold a surplus of tea, this would stand to make a loss unless it was sold, or say... destroyed?

The changes to Taxation allowing the EIC to have a monopoly on the Tea among other trade. its why they supported a lot of the fighting they stood to gain a lot from who ever won...

Essentially the process that the US government use at the moment (unjustly control assets, spark revolution, support both sides, hedge bets on the winner, clean up and make profit) was originally used by the EIC, no different to the middle east or Africa now?

The EIC went through a couple different flags, but yes, one is as described. 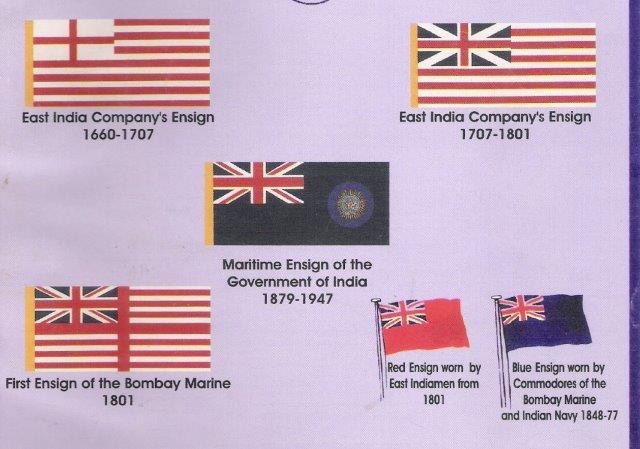 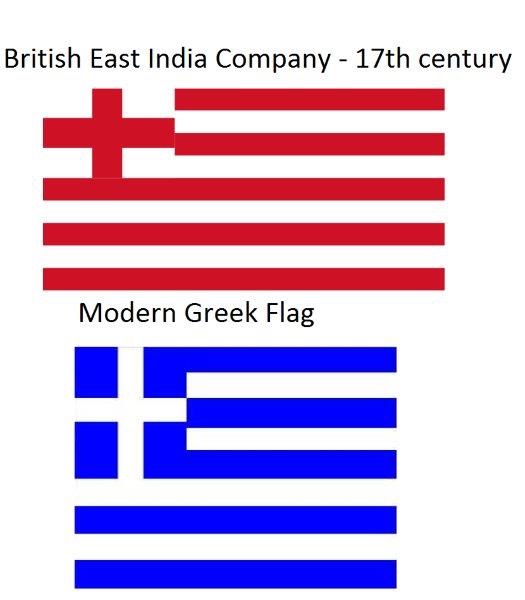 So, just because something may be borrowed from something else (happens all the time in design) doesn't mean there's some crazy, secret connection between the two.

Lithuania and Myanmar have similar flags.

Indonesia and Monaco have similar flags.

Czech Republic and Philippines have a similar flag.

Wouldn't it be just as likely that the similarity is because of a type of feudal corporate connection? Why just dismiss the possibility because there other flags baring the markings of the most powerful globally reaching company in the world?

There have been some pretty amazing books on the subject. The two barred cross, is seen in many ancient organizations, and as the Templars used it too and were throughout the nations mentioned in Europe, it doesnt seem far-fetched to me to at least speculate.
edit on 12-6-2015 by BlueJacket because: sp

That is true but it could still be copied before that from what the OP is referring as that one came first.

Even the PR flag resemble the stripes of the US flag, also the Cuban flag have the lines blue and white, but the star is in a sea of red, perhaps because it also goes back to the East Indian company also.

I wear a lot of black shirts because I like how they look. Several of them have some manner of skull symbol on them.

However likely one wants to argue it is that there's some conspiracy behind it, one must also entertain the idea that maybe they just thought it looked pretty cool?

Nothing has been dismissed out of turn. But that doesn't mean everything has some dark reason behind it, either.

originally posted by: nOraKat
Following is an excerpt from the book Critical Path by Buckminster Fuller:

It was never lost.


It is one of the relics brother Maynard carries.

Five is right out.