posted on Jun, 11 2015 @ 09:59 AM
link
Elder Scrolls fans watch with envy , Tyler Kirkham is a comic book illustrator with a passion for a game , his passion for the admittedly great Elder Scrolls games has led him to create his own slice of Tamriel in his basement , and as a Scrolls fan myself all I can say is WOW.

His cave has a Secret door activated by pulling on a book from a bookcase , distressed stone walls , helmets and weapons and a $20,000 home cinema set up to play the game on .... Oh and check out the bathroom !!!


I could hibernate in there for months.

I too would happily hibernate there!

How many sweetrolls did he have to steal to afford that?

originally posted by: Thecakeisalie
a reply to: gortex

How many sweetrolls did he have to steal to afford that? 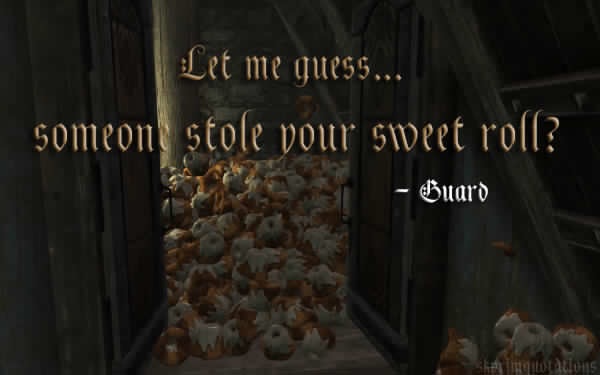 
Anyway amazing find , as a elder scroll fan this is highly welcome.

I would love a whole house in that style, even a Castle
.

Would you settle for my sex dungeon?

originally posted by: IShotMyLastMuse
this is such a waste of money!
he said, because he can't afford it

He just said that. He CAN afford it. Just look at the house itself, It ain't cheap. Have you ever embarked on a remodel project? That isn't cheap either, especially if you tackle a bathroom of any kind, fancy or not. The TV system is normal high end at $20K. In fact, you could make a case that it is mid-range.

Hard to tell what it was like originally, but if this were a contractor's "unfinished basement" in this fairly new $500-600K house, a normal remodeling job (carpets, pool table, wet bar, etc) and that TV system would have been about $35K. So the Elder Scrolls value-added is a lot less than the total price, which has been conveniently inflated to make you think he spent $50K on just the Elder Scrolls part of it.

The guy at least had a vision to do something out of the ordinary rather than accept a cookie-cutter and boring solution. And the wife is on board. It doesn't get any better than that. Personally I don't get off on Middle Ages themes, but it would have cost a whole lot more to turn that basement into a suite on Carrick Station.*

posted on Jun, 12 2015 @ 04:25 AM
link
As a high elf Mage in ESO myself I can certainly appreciate this. Though not in any way near this, my house does have dragon, gargoyle, medieval and gothic themes and feeling to it, including wall torches and chain mail panels (made those during my LOTR appreciation phase). So for all those with only a fraction of the money this guy has, a bit of creativity and a passion for oldy-worldy you too can turn your house into your themed castle.

posted on Jun, 12 2015 @ 05:00 AM
link
I would love to someday have the library in my Lakeview manor in real life. Then again, I'm partial to the whole layout of the Hjerim house in Windhelm. Murders mess aside, it's a sweet little abode when it's all cleaned up I could see building for real if I had the money. I'll skip the real life version of Calder, though. He irritated me so much that I sacrificed him on the Pillar of Sacrifice to Boethiah.
edit on 6/12/2015 by Nyiah because: (no reason given)

posted on Jun, 12 2015 @ 01:57 PM
link
Wow, he and I have a lot of the same pieces, lol. (like some of the weapons, the shield, the smaller knight armor, etc.)
Ok, now I really have to finish our damn living room (Medieval theme) and dining room (Game of Thrones theme).

Especially funny since I have the same planned secret door to lead into our bedroom...complete with book means of opening it. Just haven't had the money to build it out yet this year. Damn, I'm motivated now though...
edit on 12-6-2015 by Gazrok because: (no reason given)