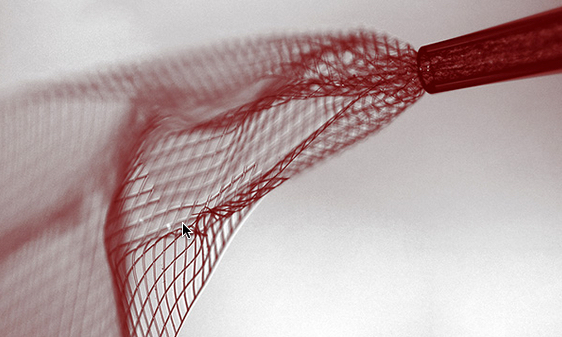 In a world first, U.S. and Chinese scientists have developed a method to inject microelectronic devices such as wires and transistors directly into the brain (or other body parts) to measure or stimulate neural activity. The new method could lead to sophisticated new ways to treat conditions ranging from neurodegenerative disorders to paralysis.

Developed by researchers in Charles Lieber’s lab at Harvard University and the National Center for Nanoscience and Technology in Beijing, the invention is based on a simple but radical concept: injecting a biocompatible polymer scaffold mesh with attached microelectronic devices into the brain via syringe.

How to inject electronics into the brain


The process for fabricating the scaffold is similar to that used to etch microchips, and begins with a dissolvable layer deposited on a biocompatible nanoscale polymer mesh substrate, with embedded nanowires, transistors, and other microelectronic devices attached. The mesh is then tightly rolled up, allowing it to be sucked up into a syringe via a thin glass needle. The mesh can then be injected into brain (or other) tissue by the syringe.

I am curious to know if this advancement could be used in an application to help kill brain tumors .

It looks promising for people who suffer from neurological disorders .

My prediction this with Technology is that we will soon be able to install "hardware" memory .

Technocracy is working its way up. crappy, but not surprising. Until people are interested in their souls, there is no place for the white buffalo. That is how it goes from centuries - step by step we are getting to the moment of a "brain in a can".

posted on Jun, 11 2015 @ 04:11 AM
link
Actually, the technique of implanting electrodes into the brain in order to adjust and/or measure brain activity is not a new concept. Deep Brain Stimulation was approved by the FDA to treat tremors in 1997 and Parkinson's disease in 2002. More recently, it was approved to treat OCD and Tourette Syndrome and is now even being used to treat drug-resistant depression. DBS is a neurosurgical procedure involving the implantation of a device that sends electrical impulses through electrodes to specific parts of the brain. The settings of the neurostimulator can be controlled by an external remote, which has the ability to adjust the voltage, amplitude, and pulse width of the electrical signal.

This is indeed quite an interesting advancement, however. It looks like this method is less invasive--it can be injected directly into brain tissue without having to open up the skull. Definitely decreases risks such as infection and may boast fewer complications. Another difference seems to be that this new method may focus more on measuring brain electrical activity rather than altering it.

To answer the OP's question regarding these devices killing cancer cells--it's very unlikely. This technology was not meant to be a treatment for cancer, but rather for neurodegenerative/neurocognitive conditions such as the aforementioned Parkinson's disease, Essential Tremor, Tourette's, OCD, Depression, etc.
edit on 11-6-2015 by kayej1188 because: (no reason given)

You'll never see me go for any of these procedures, I see all this as mind control.

posted on Jun, 11 2015 @ 04:59 AM
link
My son and I were just talking about this earlier today as a means of overcoming paralysis... interesting!

posted on Jun, 11 2015 @ 06:58 AM
link
Hard-wiring into neurons has been going on for a while now. Problems with previous methods is in how the connections degrade over time. Biological organisms are constantly rebuilding themselves all the time, where as our mechanical and electrical devices are only built once.

Using a framework rather than a direct neural connection does allow for some flexibility for the mechanical device to adapt with neuron changes. It sounds like a good idea, but time will tell if it is a winner.