Though Kalel Santiago of Puerto Rico is only 9 years old, he’s already endured some adult-level struggles. At just 10 months, he was diagnosed with the rare childhood cancer neuroblastoma, and spent more than two years undergoing surgery, chemotherapy, and radiation treatments. Then came the next diagnosis: severe, non-verbal autism. 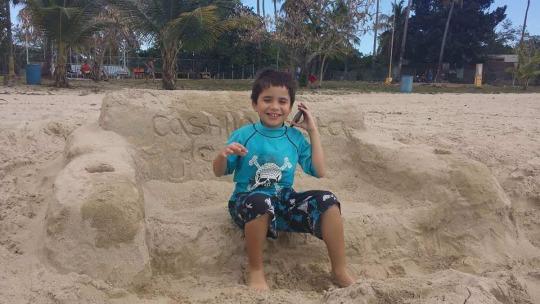 “You can’t imagine the emotion we had, hearing Kalel’s voice for the first time. It was amazing. The teacher recorded him and sent it to my wife and me and we said well, the only different thing we have been doing is using the CBD.”

I have seen and read some amazing things with cannabis(CBD) oil treatments but this is a new one to me. The CBD literally rewired his brain allowing him to talk. He seems to be developing at an amazing rate as well. That is the thing that astounds me is the speed and effectiveness of this kind of treatment.

But then there is this.

But the Food and Drug Administration (FDA) would disagree. The agency maintains that such products are unregulated and therefore not proven safe, and that their sale as dietary supplements is in fact illegal. (Though enforcement of such sales, spokesperson Jeff Ventura tells Yahoo Parenting, would depend on factors including “agency resources and the threat to the public health.”) In February, the FDA sent warning letters to many CBD oil manufacturers, telling them to stop making medical claims — like being cure-alls for everything from glaucoma to Ebola — about their products.

If that were true.
Why does the US government health and human services department hold a patent on CBD?
Cannabinoids as antioxidants and neuroprotectants

We are clearly being fed a bunch of bull here.
To help the movement go HERE.
To purchase legal, reliable, safe, organic CBD oil go HERE.

Funny as I sit here writing this the newest issue of Dope magazine just arrived at my door.
And guess who's on the cover?
Our good friend here at ATSJesse Ventura!
If your reading this Jesse.
Your the man!

Money and corruption that is RAMPANT in the FDA due to big Pharma infiltration.

That patent is all the proof you'll ever need in any argument regarding the study of CBD's.

I cant wait till everybody gets over marriage equality , pot is next.

originally posted by: tothetenthpower
a reply to: JAY1980

That patent is all the proof you'll ever need in any argument regarding the study of CBD's.

I cant wait till everybody gets over marriage equality , pot is next.

Yes, I never could understand what the point of having government agencies holding patents or copyrights was. DHS, NASA, etc... it makes zero sense to me that any publicly funded research would be sequestered from public use.

posted on Jun, 4 2015 @ 08:00 PM
link
So many states in particular won't allow the oil to be legal as it's been brought up recently to vote on. Let alone for these young patients. It's all of greed and ignorance of those politicians who follow the greedy propaganda. I hope his success stands for some influence to change minds of these restrictions. In fact sending this to my State Governor right now. For what it's worth.

posted on Jun, 4 2015 @ 08:24 PM
link
a reply to: dreamingawake
It been made legal in my state...but only for two narrowly-defined conditions.

That is not only discriminatory, that is politicians playing doctor, without the license to do so. Recognizing that the CBD oil is medically beneficial for seizures of a childhood condition while ignoring the wide variety of ailments it is effective in treating is just WRONG.

What sucks is that the new law here could be expanded if a court was forced to recognize and accept the wealth of evidence already available at just the PubMed and NIH libraries about the safety and effectiveness of CBD in treating a wide range of serious medical conditions that have only toxic and debilitating alternatives for treatment. The passage of the new law opens that door....but someone would have to risk prison and spend a LOT of money to force courts to broaden the law and allow usage for a broader range of conditions as determined by a medical professional, NOT a politician.

Until then, people with serious medical conditions that could benefit immensely have to suffer, or be felons hiding from the law.

We can post links to cannabis sources if they're legal? Like, a link without advocating its use?

I would hope we are mature enough to share some sort of resource database with our ATS peers.

originally posted by: JAY1980 The CBD literally rewired his brain allowing him to talk. He seems to be developing at an amazing rate as well. That is the thing that astounds me is the speed and effectiveness of this kind of treatment.


Any brain scans that show this?

I am a huge proponent of medical cannabis. But claims like these don't help, they hurt.

Better to stick with simply saying it helped him, and others should be allowed to follow suit.

originally posted by: stuthealien
how can you patent a natural product??? its not theirs to patent .


Where do you think almost everything we use comes from? Natural sources.

Why not? The government has a patent on the weed.

A patent on a strain. Not the whole genes line with all its species and sub-species.

There's THC, CBD, But there is over 85 known different cannabinioids and assuming it has a ton more considering the veracity of the plant and how easily its differences flex among the possibilities in the forms of Adaptation.

There's probably a 1000 or couple thousand different strains of Cannabis alone that each possibility have different cannabinoids that simply havn't been discovered yet.

Current strains have been bred to produce high ammounts of THC- and CBD. The molecules are similar but the information they hold different.

Which is why even tho they can create a synthetic compound of the exact same molecule and have different effects mostly lethal because the synthetic compound did not come from a plant. Which has a rigid structure of uniformed particles reflecting on a specific souce of information.
When you create unnatural-manmade products. It lacks the same vital information which came from the source that created it. Such as from the leaf of the plant. You can grow a whole new plant just from the leaf alone which does not require THC, or the components that create it in order to exist but synthetics takes a specific compound done in such a way in order for the molecules just to bond in such a way.... It does not contain the same *Genetic* code as it has no Genetic code to begin with.

This is why pills tend to be more lethal because they are immitations of natural sourced molecules, but are missing vitally charged information...

Because it isn't regulated, it isn't allowed. That is some funny crap.

posted on Jun, 15 2015 @ 12:51 PM
link
Wow, that is phenomenal. Wish it was more known - there are so many kids around the world, who could be helped if they only knew of this cure. Wish people were more "self-sufficient" too, and did their research instead of buying every word from their doctors.

Everyone in the country pretty much knows that the FDA is behind accepted science here and that the only reason the federal government hasn't descheduled marijuana is because of significant lobbying platforms to keep it there from law enforcement lobbies, prison lobbies, and pharmaceutical lobbies.