Is the US arming ISIS? Iraq Loses 2,300 Armored Humvees to ISIS

Is the US secretly arming ISIS?

It was just recently revealed that Iraq lost 2,300 US armored humvees to ISIS...Why are we spending so much money on arming the middle east when it just goes into the wrong hands, or maybe it's in the wrong hands to being with? Is it all a plan?

What happened in Mosul a year ago, for the Iraqi security to flee and abandon all their weaponry? Was it all a set up to give ISIS the weapons, and the city?

The United States has supplied Iraq with hundreds of millions of dollars in military hardware, including Humvees, and Defense Secretary Ash Carter recently claimed the country's forces "just showed no will to fight" against ISIS.

No will to fight against ISIS? Why buy the weapons if you're not willing to fight? Something doesn't add up.

Last year, the US State Department approved a possible sale to Iraq of 1,000 Humvees with increased armour, machine-guns, grenade launchers, other gear and support, which was estimated to cost $579 million.

Clashes began in Mosul, Iraq’s second city, late on June 9, 2014, and Iraqi forces lost it the following day to Isis, which spearheaded an offensive that overran much of the country’s Sunni Arab heartland.

The militants gained ample arms, ammunition and other equipment when multiple Iraqi divisions fell apart in the country’s north, abandoning gear and shedding uniforms in their haste to flee. 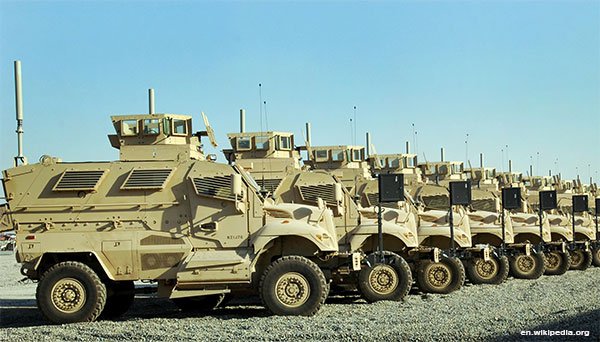 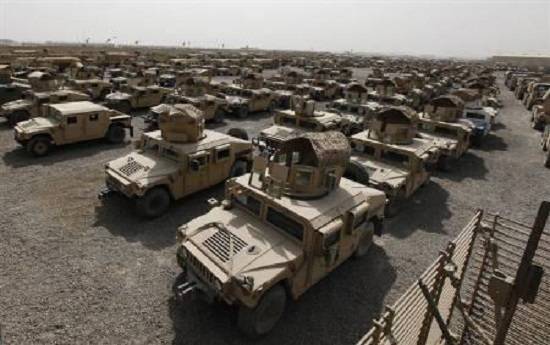 If so and we apply your logic evenly. Russia and the Soviet Union are responsible for every AK-47 and RPG in terrorist hands across the world.
edit on 1-6-2015 by Greathouse because: (no reason given)

This situation is a simple confluence of two ineptitudes.

1) The general ineptitude of the Iraqi armed forces (let's not forget how quickly they melted away in both Gulf wars against Allied forces). These guys want to wear uniforms and get paid - not to fight and (possibly) die.

2) The complete ineptitude of the current American administration, who prematurely pulled out all combat forces to make a political point (ie. to cement what Obama thought would be his "legacy" of ending the Iraq War)...all the while knowing full well about ineptitude No.1.

Anyway, I'm sure Iraq paid for the arms.

posted on Jun, 1 2015 @ 06:19 PM
link
If you loved money and power, wouldn't you let the criminals run free and destroy the resistant countries that stand in your way?

The Pentagon has lost track of about 190,000 AK-47 assault rifles and pistols given to Iraqi security forces in 2004 and 2005, according to a new government report, raising fears that some of those weapons have fallen into the hands of insurgents fighting U.S. forces in Iraq.

And look how many Iraqi's and people in afghanistan they have trained given weapons&armor, for each person being trained the costs is about $150.000.. how many of those who where trained are now fighting for ISIS? Probably allot!

Anyways who knows it's just part of a plan; a more unsafe world where more weapons can be made & sold.

No surprise to me that you would leave logic out of your opinion .

This is far beyond mere ineptitude.

Drones could take ISIS out. As could carpet bombing. Mass columns of vehicles (Humvees or otherwise) are a turkey shoot from the air, as per the Gulf War. Why is this not done ?

To this day, Obama is putting pressure on Egypt to allow the Muslim Brotherhood back in power, despite the fact they were deposed by a popular revolt, the people of Egypt.

The only explanation is the obvious one: Obama is an Islamist.
edit on 1-6-2015 by M5xaz because: typo

originally posted by: Greathouse
a reply to: game over man

If so and we apply your logic evenly. Russia and the Soviet Union are responsible for every AK-47 and RPG in terrorist hands across the world.

What does that have to do with the fact that the US is supplying miltary equipment to a group a fighters that are currently fighting the US's enemies?

This is far beyond mere ineptitude.

Drones could take ISIS out. As could carpet bombing. Mass columns of vehicles (Humvees or otherwise) are a turkey shoot from the air, as per the Gulf War. Why is this not done ?

To this day, Obama is putting pressure on Egypt to allow the Muslim Brotherhood back in power, despite the fact they were deposed by a popular revolt, the people of Egypt.

The only explanation is the obvious one: Obama is an Islamist.

Who cares if he his? The pentagon supplying arms to religious extremists seems to be outside of Obama's control.

The US armed and continues to support the Syrian Rebels, and John McCain shook their hands for a photo op. That's enough for me. The stuff ISIS takes from the Iraqi military is just a bonus. I think the US has been behind ISIS since its inception...the same for Al Qaida, oh yeah and the Iran Contra. Why not ISIS too?

Nonsense. They've been playing stupid forever, and at every turn their stupidity has been directed towards starting wars.

And the terrorists have been just as stupid- Only trying to attack a couple times a year, always with a mental defective who has to go through the FBI to get a bomb because he hasn't been trained.

At what point does it become impossible to miss the fact that both fighters are pulling punches? It's a fake war.

Being a college educated millionaire who has held important positions pretty well guarantees that if you are an idiot, you are aware enough of that to have people around you who tell you how not to catastrophically idiot all over yourself, but the political puppet show is a form of ideological jiu-jitsu- it makes sure half of us will always believe that the guy we voted for is right even if he sets the whitehouse on fire and roasts marshmallows on the embers and that the other half would just roll their eyes and say "i told you he was stupid" and not think there's anything bigger behind it. We lie to ourselves for them when the truth is right in front of us.

Why are all of our enemies trained and armed by us? Because it is a huge macroeconomic force that can be predicted and controlled, giving the US and certain particularly wealthy citizens in particular a huge advantage against the rest of the world? Or because of a long string of incredibly unlikely mistakes spanning the last 5 presidencies?

posted on Jun, 1 2015 @ 07:01 PM
link
The only real way to stop ISIS is to clean up our tax system. Starve the oversized gov't and ISIS will disappear, like magic. And we get to keep our hard earned cash.
edit on 1-6-2015 by BELIEVERpriest because: (no reason given)

Not my fault you can't figure it out.


The Pentagon has secretly shipped tens of thousands of small arms from Bosnia to Iraq in the past two years, using a web of private companies, at least one of which is a noted arms smuggler blacklisted by Washington and the UN.
According to a report by Amnesty International, which investigated the sales, the US government arranged for the delivery of at least 200,000 Kalashnikov machine guns from Bosnia to Iraq in 2004-05. But though the weaponry was said to be for arming the fledgling Iraqi military, there is no evidence of the guns reaching their recipient.

originally posted by: Greathouse
a reply to: MALBOSIA

Not my fault you can't figure it out.

If so and we apply your logic evenly. Russia and the Soviet Union are responsible for every AK-47 and RPG in terrorist hands across the world.

Who else would you blame for the proliferation of AKs in the world? Let me guess... Iran?

Point is, we shouldn't be spreading weapons all over the world in the first place. We shouldn't be making and breaking nations. Period.

Because this is what happens (if you believe any of it, of which I do very little).

posted on Jun, 1 2015 @ 07:49 PM
link
I think the facr that ISIS' very own members are leaving in numbers on account of their theorized links to the CIA speaks volumes.