Here we go again. More circumventing the 2nd by the Admin

So, this admin and the Progressives can't get take away gun rights via law, because the people don't want it. Instead it will try to do it in the typical Govt back-dooring of policies.

Time to burn up the phones and email servers again, for anyone that values their Rights.

posted on Jun, 1 2015 @ 10:25 AM
link
Is there a place I can view these proposed regulations? From the article it seems like the regulations are aimed mainly at keeping guns away from the mentally unstable and domestic abusers.

MoreBeer
+5 more
posted on Jun, 1 2015 @ 10:36 AM
link
And the bootlickers will be along to praise King Obama for taking their rights simply because he is a progressive and doing "whats right".

Wow - check out how many times the article sites mentally ill and domestic abusers as primary killers therefore primary target of the US governments push to get your guns.

They say keeping guns away from dangerous people is of primary importance.

“If America worked harder to keep guns out of the hands of dangerous people, there would be fewer atrocities"

Zeroing in on policies that would keep guns away from the mentally ill and domestic abusers.

as opposed to banning all people who are mentally ill.


If America worked harder to keep guns out of the hands of dangerous people, there would be fewer atrocities"

yeah but if you put the full might of the US military into the hands of a dangerous US muppet president, then you get global atrocities where tens of thousands are murdered - but we won't talk about that because that is a different type of premeditated murder - it's a murder allowed by the government.

I'm not even from your country, nor a gun owner and even I can see the relentless and ongoing blatant push to disarm America whilst at the same time Militarizing and equipping the domestic police force to the teeth.

It's almost as if a great unknown force is pushing the US citizenship to the brink of a civil war between the citizens and the government.

If I were an American, I'd be stocking up on guns and ammo right about now.


Well, that should certainly discourage some people from seeking help. What is the definition of mentally ill, anyways?

I see this argument a lot. Don't get me wrong, I fully support the 2nd amendment. I grew up around guns and learned how to shoot at an early age. I owned, and still own guns (Though they're at my parents' house currently, since I live abroad). But every time I see the argument "They'll get guns anyway so why bother" it kinda makes me wonder why people say that. Yeah, some people will do anything to get a gun. But why shouldn't there be some common sense measures in place to at least make it more difficult for a deranged person to obtain a weapon? For every road block a person might face, that's another opportunity for them to think it over, and maybe decide that's not what they really want.

I understand the whole "Obama's trying to take your guns away" thing, but until the jackbooted thugs come knocking at your door to take your guns away, I think the fear is unfounded. And trust me, no sitting president will EVER order the confiscation of your firearms in America. That would trigger a full on civil war overnight. And I guarantee you 90% of the military would turn on the government should that ever come to pass.

What is the definition of mentally ill, anyways?

Oh I dunno, maybe doing the same thing over and over and expecting different results - like voting in US presidential elections. 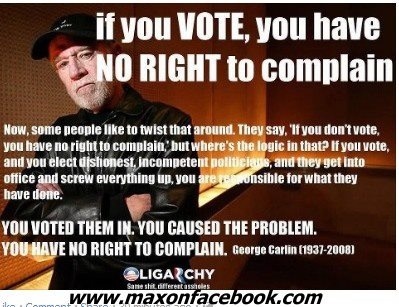 Requires background checks for all gun sales and strengthens the background check system. This would include removing barriers under the Health Insurance Portability and Accountability Act so that states may more freely share information about mental health issues involving potential gun purchasers.

Provides states with monetary incentives—$20 million in fiscal year FY 2013 and a proposed $50 million in FY 2014—to share information so that records on criminal history and people prohibited from gun ownership due to mental health reasons are more available.

Bans military-style assault weapons and limits magazines to a capacity of 10 rounds.

Provides additional tools to law enforcement. The plan proposes a crackdown on gun trafficking by asking Congress to pass legislation that closes “loopholes” in gun trafficking laws and establishes strict penalties for “straw purchasers” who pass a background check and then pass guns on to prohibited people.
Urges Congress to pass the administration’s $4 billion proposal to keep 15,000 state and local police officers on the street to help deter gun crime.
Maximizes efforts to prevent gun violence and prosecute gun crime. The president calls upon the attorney general to work with U.S. attorneys across the country to determine gaps occurring in this area and where supplemental resources are appropriate.

Directs the secretary of the Department of Health and Human Services to issue a statement to health care providers that they are not prohibited by federal law from reporting threats of violence to the proper authorities.

Helps schools invest in safety. The president’s plan calls for more school resource officers and counselors in all schools through the Community Oriented Policing Services hiring program. The plan also calls for the federal government to assist schools in developing emergency management plans.

Improves mental health awareness through enhanced teacher training and referrals for treatment. The plan calls for the training of 5,000 additional mental health professionals nationwide. The plan also calls for coverage of mental health treatment under the Patient Protection and Affordable Care Act and the Mental Health Parity and Addiction Equity Act of 2008.

The only one that I really take issue with is "Bans military-style assault weapons and limits magazines to a capacity of 10 rounds. We need to know what is defined as "military-style". And I don't believe the amount of rounds in a magazine is going to make a difference whatsoever.

It's also important to note that a majority of these measures have to go through congress. So the process is still there to strike this down if needed.

That being said, I am a gun owner/pro-2nd and I can support much of what is proposed.

Yeah, the ban on assault weapons I doubt will ever make it through congress. But the rest of the measure I can agree with, if they're tweaked a bit.

Your argument is invalid. Nobody is confiscating guns.

So, basically, this would require the ATF to have everybody's medical records, right?

Does everybody still like the forced and irreversible collection of their medical records by the federal government?

This is just one of many possible abuses we can expect to endure before we come to our senses.

Do you back a law that requires an ID card to vote?

Just wondering, since federal law states that convicted felons are no longer eligible to vote.
I wonder what would happen if someone tried to pass a law requiring background checks before you vote... EVERY TIME THAT YOU VOTE.

originally posted by: Sublimecraft
a reply to: ventian

What is the definition of mentally ill, anyways?

Oh I dunno, maybe doing the same thing over and over and expecting different results - like voting in US presidential elections.

love this by the way.

anyone see the breaching of patient-doctor confidentiality (LAW) here? by sharing medical records? or is mayhem and chaos ok when it benefits the government?
edit on 1-6-2015 by fixitwcw because: edit

No but they could prevent innocent people from purchasing firearms, considering how broad the definition of "Mentally ill" and "Domestic Abuse" can be interpreted. I would say they need to prevent people with a violent background from getting their hands on guns. However, the way it is now they could paint almost whoever they want as mentally ill or domestic abuser. If a vengeful ex want to get back at you and report you for domestic abuse, does that mean your rights will be taken away without your day in court? If you have problem sleeping and have to visit a psychiatrist does that make you "mentally ill"

It's not a blanket effort to remove guns, just an effort to remove guns from the hands of those who might allow their psychoses to direct their actions. That said, it would be a better idea to keep the mentally unstable away from the guns, and indeed out of societal circulation until such time as they pose a nil threat, but that would probably cut into the offence bu-I mean the defence budget too much, because of all the beds that would need to be made available in mental hospitals.

posted on Jun, 1 2015 @ 11:32 AM
link
The basics here are simple....When the law is set for a mentally ill person to be kept from owning firearms, and the government to set the standards of mental health, then there is the door open for the power hungry. Jack was military, good record, true constitutional patriot, but Bill is a hardcore liberal, and wants all guns... and is a shrink. He will label anyone what ever sets his agenda to anyone in disagreement. The people whom need not own firearms should be prohibited by a judge whom has this power now and the law should remain as current. This is just a play to move the goalpost later, and nothing to do with anything else....

These are things that can be hammered out during the congressional process. For instance, simply being charged with domestic abuse should not preclude you from purchasing a gun, though that may be suspended until your trial. If you're CONVICTED, I think you shouldn't be able to purchase a fire arm. Yes, even something as small as a slap. If you're violent enough to strike your spouse, you have no business owning a firearm.

And the type of Mental Illness should play into whether it excludes you from gun ownership. Specifically, mental illness that can lead to either suicide or violence against others should land a ban on owning guns. Something simple like chronic insomnia of seasonal affective disorder shouldn't.