Have you ever seen a full circle rainbow?

Theres a pot of Toxic waste near by

What Gold? Go Buy yourself a Gold.

Well, it ain't gold.... but it sure is something .
I remember that story on the news in the 70's.
That is really sad.

posted on May, 28 2015 @ 06:00 PM
link
Yes, and I also once saw a pink one. It was one of those rare pink sunsets in the west, and a rainbow formed in the east. With only pink light, it was pink and beautiful. Sadly, I didn't have a camera along.

It's because of your birds-eye view. From the ground they just look like a arc.

I've seen one around the sun, but never like that! Very cool!

Saw one in Alaska once, when I was being flown into Cold Bay. It was the only time, I think, that I can recall seeing the sun in Cold Bay...and that was my reward. Rather cool.

I saw a quad rainbow once when I was but a wee lad... That was cool, too.


Apparently there is fungus among us.
edit on 5 by Mandroid7 because: (no reason given)

edit on 5 by Mandroid7 because: addded vid

posted on May, 28 2015 @ 09:06 PM
link
I was skiing once while there a fine, mild snowfall and saw one circled around the sun. Just as interesting was that the top, bottom and both sides were four other rainbows arcing outward. Like this ) O ( but with arcs on the top and bottom also. Too bad it was in the days before cell phone cams as it was seemingly quite a rare anomaly

posted on May, 28 2015 @ 09:10 PM
link
I was thinking big deal gonna be a reflection in a pond..
Boy was I wrong. That was a rainbow in a musta-truckin
circle.
perspective ? height ? who cares it's beautiful and I've never
seen one.

A circle makes perfect sens. The high perspective is what makes both the rainbows so special.

posted on May, 28 2015 @ 10:10 PM
link
a reply to: Akragon
I remember seeing two separate double rainbows at the same time, about 45 degrees offset from POV.

Flat plain area right after a rain, with multiple sun breaks thru clouds. Must of been about 1964 or so.


Hey! I'm not seeing your avatar or bottom banner. Lost in move?

Sometimes you just have to enjoy the wonder of refracted light at just the right time of day!

posted on May, 28 2015 @ 10:56 PM
link
Very cool! I wonder of I can get anything like that over Tahquamenon Falls. I doubt they have the water flow for it though. Plus, with the trees around there isn't much spray. And, this time of year, I'm liable to be carried off by the mosquitoes.

I've seen a 22° halo around the sun a few times, a couple times around the moon.

Doubt I'll ever be lucky to see anything like this though! 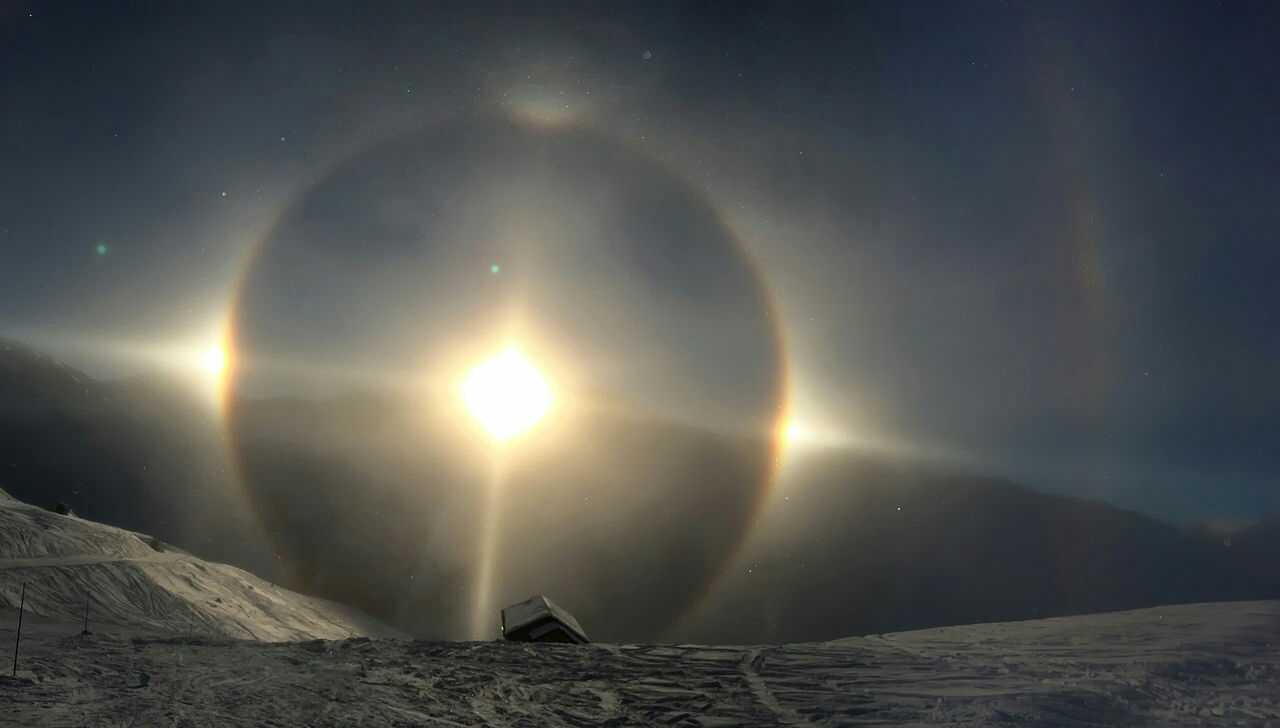 edit on 5/28/2015 by cmdrkeenkid because: Accidentally posted before I was done typing.

Saw that one time in a display of weather like I've never seen before or since. It's a pity it was before phone cameras.

It was really hot and muggy, up in the high 90s, then this front came through. There was a jet black wall cloud with a razor sharp edge to it, totally straight as far as you could tell, moved through faster than anything. The wind picked up really hard and gusty and the temp started dropping like a rock. As the edge of the wall cloud moved over the sun, a four spot parhelia like that popped into place, with one image sun over the wall cloud, the two top and bottom ones split between clear and black, and one in the clear area, with a perfect ring joining them all.

Didn't last but a few seconds.

Then, of course, it dropped about 50 degrees in an hour and rained like hell, so I guess we had to pay for seeing it the hard way.

eta: there's a few places, I think one is in Hawaii, where if you stand in a group on the edge of the cliff and there's a fog below you at the right time of the day, you will see a circular rainbow around YOUR head but not the others in the group
edit on 28-5-2015 by Bedlam because: (no reason given)